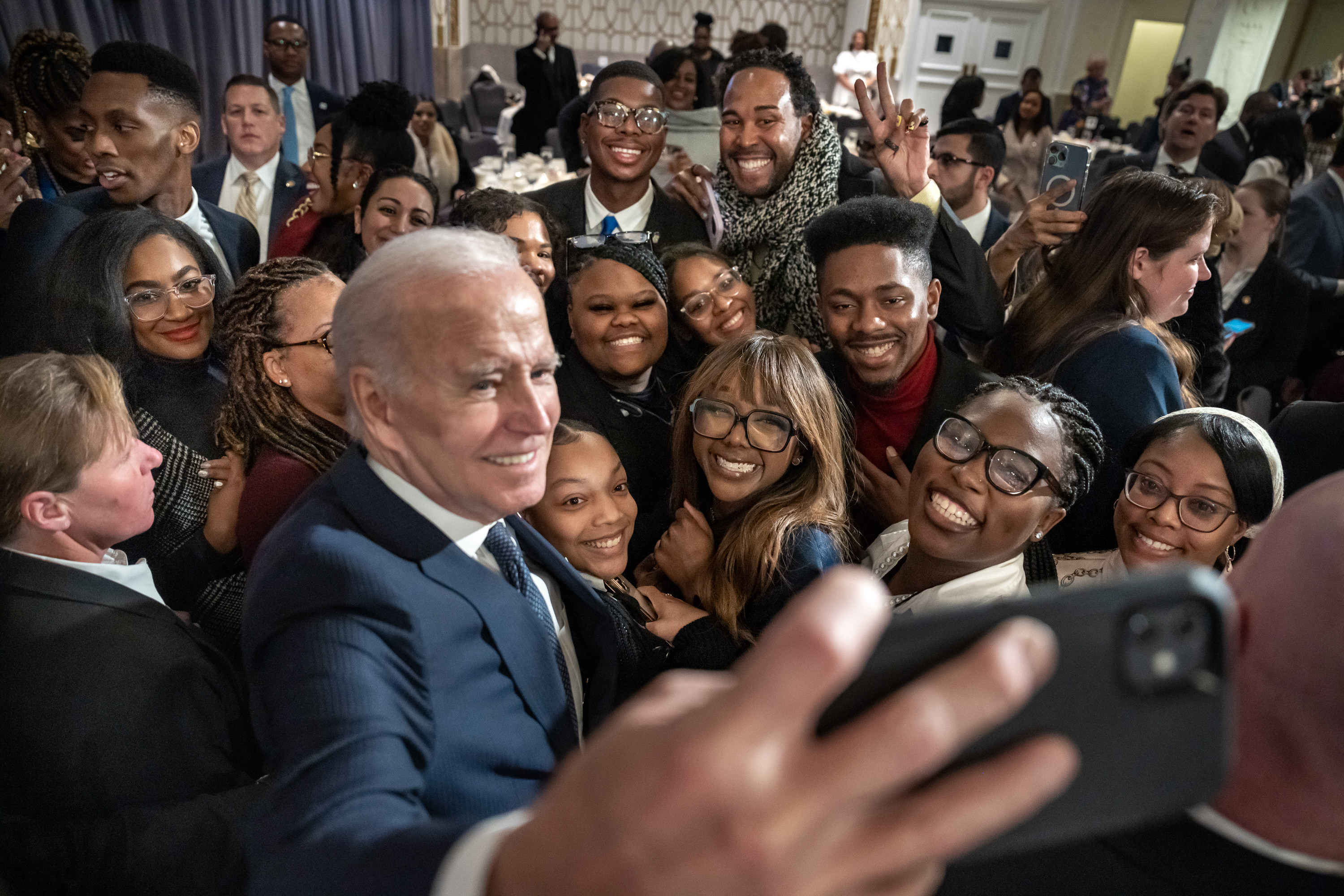 Rolling Stone: “Two thousand attendees at the National Pro-Life Summit cast their votes on Saturday for their favorite prospective GOP nominee for president in 2024. The winner is: Florida Governor Ron DeSantis.”

“It was the first 2024 straw poll conducted among anti-abortion voters, one of the Republican Party’s most loyal voting blocs. DeSantis banked more than half of the votes cast, 53.73 percent. Former President Donald Trump placed in a distant second with just 19.22 percent.”

“Despite the Democrats’ level of exposure, we view the overall race for the Senate as a Toss-up to start.”

ARIZONA U.S. SENATOR. Punchbowl News: “It seems like a pretty simple question. But most Senate Democrats won’t answer it directly.”

“Democratic Rep. Ruben Gallego’s entrance into the Arizona Senate race has paralyzed Democratic leaders — at least temporarily — as they ponder what will be a major decision with far-reaching implications for control of the Senate and a seat they badly need to hold onto.”

“Few Democrats would tell us last night whether they favor backing the eventual Democratic nominee or incumbent Sen. Kyrsten Sinema (I-AZ), who left the party in December. Their responses were pretty consistent: It’s too early to say.”

“The NRSC’s early anti-Manchin messaging is part of a pressure campaign designed to dissuade him from seeking a third term. Manchin is the only Democrat who can realistically hold a Senate seat in one of the most conservative states in the country.”

Insider: Manchin says he hasn’t ruled out a presidential bid in 2024.

NEBRASKA U.S. SENATOR. Former Nebraska Gov. Pete Ricketts (R) was sworn in as the newest member of the U.S. Senate on Monday, replacing Sen. Ben Sasse (R-NE) as the Senate returns from several weeks of recess to begin a new session of closely-divided government, the AP reports.

“Rev. Franklin Graham, one of the nation’s most prominent evangelical leaders and high-profile supporters of former President Donald Trump, says he won’t be endorsing anyone in the 2024 Republican primary race,” CBS News reports.

“Graham, who left the Republican Party in 2015 and has been an independent since then, does not generally endorse during the primaries, but his decision not to support Trump’s primary bid for 2024 may nonetheless come as a surprise because he was such an outspoken defender of him during his presidency and predicted in 2020 that Trump would go down in history as ‘one of the great presidents.’”

“Several other evangelical leaders, too, are waiting for the field to fill out in the next few months. It’s a sign that although he’s the former president and the only declared candidate, Trump is not entering the upcoming GOP primary season with the full backing of key allies and supporters.”

“As he left office Wednesday, it remained an open question if the skills that catapulted Hogan to unusual popularity as the Republican governor of a Democratic state could be sold to a fractured Republican Party.”

“Any presidential bid would be built on his tenure in Maryland, where he forged rapport with the electorate through handling crises and a skilled public relations operation, deploying populist policies such as cutting tolls and putting air-conditioning in schools.”

“Donald Trump endorsed Matt DePerno on Friday night to become the next chairman of the Michigan Republican Party, a move that could boost the former attorney general candidate’s support among GOP delegates in next month’s state convention,” the Detroit News reports.

“Those decisions made a profound difference: Democrat Katie Hobbs picked up the support of 33,000 Maricopa County voters who cast ballots for Republicans in six down-ballot races, such as state treasurer and county attorney. Adding to Lake’s deficit were another nearly 6,000 Republican-leaning voters who opted to skip the race altogether or wrote in a candidate, the analysis found.”

“If those voters had stuck with the GOP ticket, Lake would have won. She lost by 17,117 votes statewide.”

CHICAGO MAYOR. “Lori Lightfoot made history as the first Black woman and first openly gay person to serve as Chicago mayor, sailing to victory four years ago as an outsider who vowed to rid City Hall of corruption and deliver a safer, more equitable city,” the AP reports.

“But her bid for a second term is very much in question amid concerns about continuing high crime in the nation’s third-largest city and accusations that she is overly hostile and sometimes flat-out mean — criticism she has dismissed as sexist and racist smears against a tough leader who is passionate about Chicago.”

Two firms are out with the first polls we’ve seen from 2023 of the Feb. 28 nonpartisan primary for mayor of Chicago, but they agree on little about the state of the race other than that incumbent Lori Lightfoot is in rough shape.

We’ll start with the survey from Lester & Associates for one of the candidates, Alderman Sophia King, that was conducted Jan. 9-14:

In the likely event that no one takes a majority, the top two vote-getters would advance to the April 4 runoff. The memo says the remaining candidates took less than 1%, though the only other contender on the ballot is Alderman Roderick Sawyer.

Next up is a survey that began days later from M3 Strategies for Americans for a Safer and Better Tomorrow, though it’s not clear who the sponsor is rooting for. The numbers from the firm’s December poll are in parentheses:

Lightfoot got some better news Friday when she earned the backing of EMILY’s List, but there’s little question she’s in a tough spot four years after she won this office in a 74-26 landslide. Politico’s Shia Kapos recently took a look at why so much seems to be going wrong for the mayor. Kapos explains that not only has Lightfoot had to deal with the perception that crime has risen on her watch, but “There’s also an elephant in the room: her personality.”

Lightfoot’s supporters, write Kapos, argue that she’s been held to a “double standard” that her recent predecessors weren’t subject to. “When former Mayors Rahm Emanuel or Richard M. Daley cursed, for example, onlookers seemed amused or even proud of the tough Chicago mayor’s aggressiveness. When Lightfoot does it, people have taken offense — unless it’s been aimed at former President Donald Trump.”

Some of ​​Lightfoot’s former allies, though, have a different take on things. Alderman Susan Sadlowski Garza said last year she wouldn’t back the incumbent again by declaring, “I have never met anybody who has managed to piss off every single person they come in contact with—police, fire, teachers, aldermen, businesses, manufacturing.”

This month another alderman, Derrick Curtis, also had some choice words for Lightfoot for failing to contact him after he was wounded when the gun he was cleaning accidentally discharged. “I felt myself being a very, very close friend and ally to her. I really was a No. 1 cheerleader,” said Curtis, “But, she never called when I shot myself … I wouldn’t treat my friends that way.”

PHILADELPHIA MAYOR. While former Lt. Gov. Mike Stack, who badly lost renomination to now-Sen. John Fetterman in the 2018 Democratic primary, said in November that he may campaign as an independent, he recently made an appeal to the Democratic City Committee as he mulls a bid.

The Philadelphia Inquirer reports that the former lieutenant governor said he’d decide by mid-February if he’d enter the race, though party chair Bob Brady went further by telling the media, “Stack announced.” Brady continued, “He didn’t announce it to the public but he announced to us [party ward leaders and committee people], he said he’s running for mayor.”

Former Councilmember Helen Gym on Monday earned the backing of the Philadelphia Federation of Teachers for the May Democratic primary, an endorsement that the Philadelphia Inquirer‘s Anna Orso writes “typically comes with a substantial get-out-the-vote apparatus.” Orso adds that the only other major union that’s taken sides so far is AFSCME District Council 33, which is for businessman Jeff Brown.

NEW YORK 3RD DISTRICT. Another day, another set of Republicans who could campaign to succeed GOP Rep. George Santos whenever his seat is next on the ballot. JTA’s Ron Kampeas interviews Nassau County Legislator Mazi Melesa Pilip, who says, “I’m not going to lie to you, people are definitely asking me to run … That doesn’t mean nothing.” Pilip was airlifted from Ethiopia to Israel as a child, and Kampeas titled his article, “Meet the real Jewish Republican of color being floated to replace George Santos, the fake one.”

Brookville Mayor Daniel Serota, meanwhile, tells Newsday’s Michael Gormley that he knows he’s been mentioned as a possible contender, but he won’t say more until there actually is a vacancy on the GOP ticket. Gormley also reports that Alison Esposito, who was the party’s 2022 nominee for lieutenant governor, has met with state and national Republicans, but Esposito hasn’t said anything publicly. State Sen. Jack Martins, finally, said he plans to stay where he is, though he doesn’t appear to have ruled anything out.

Nassau County Legislator Josh Lafazan, who took third in last year’s Democratic primary, has filed paperwork with the FEC to raise money for a potential bid for the seat that’s now held by the globally infamous George Santos, though he hasn’t publicly committed to anything yet.

Lafazan recently said he was focused on his re-election campaign this year, a response that very much didn’t rule anything out for 2024. However, as we’ve noted before, these super-early filings from defeated candidates often have more to do with resolving financial matters from their last campaign than they do about the future and don’t necessarily mean that they’re planning another effort.