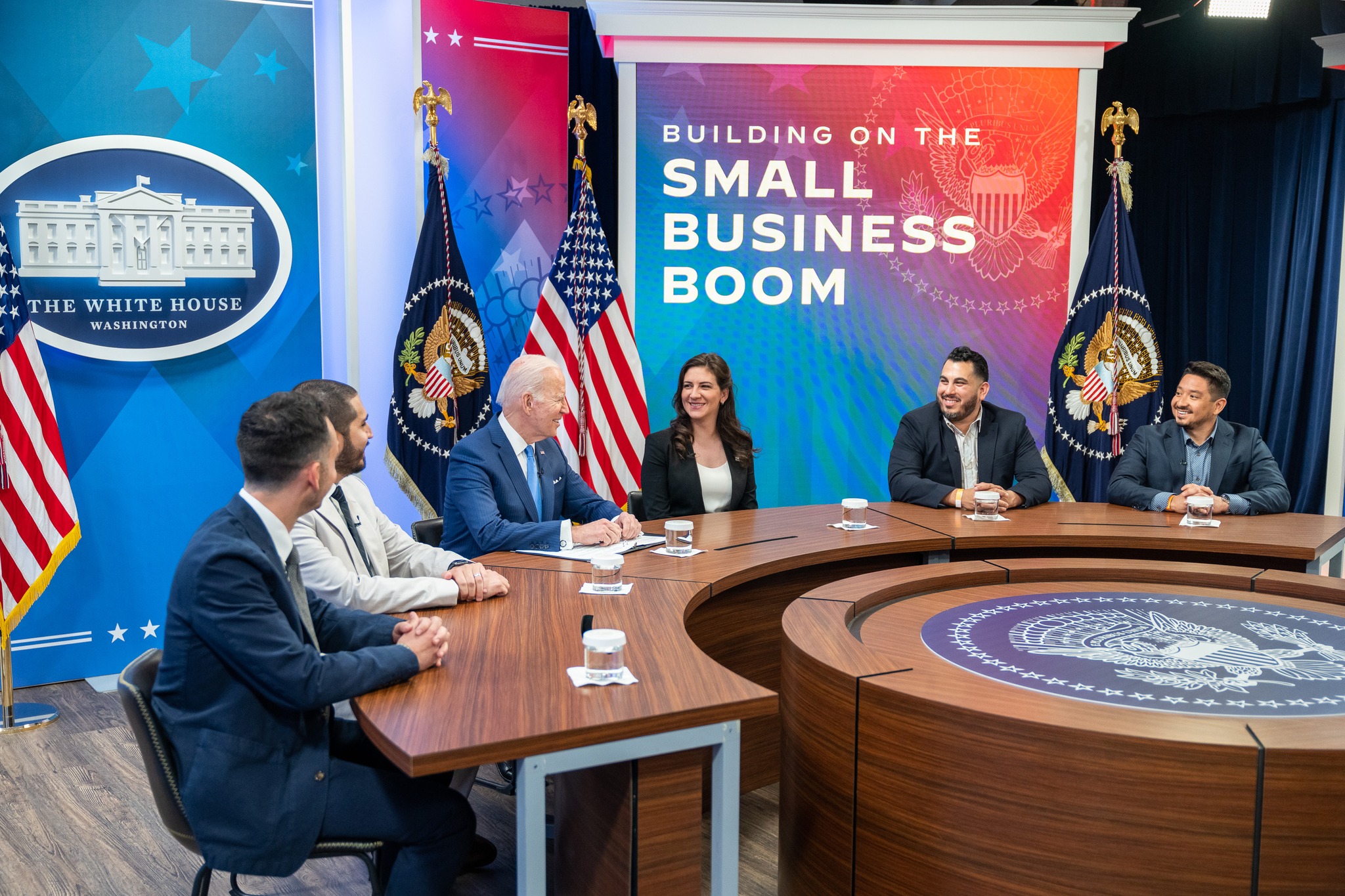 A whopping 71% of suburbanites think he should quit.

Said pollster Steven Greenberg: “Voters overwhelmingly view Santos unfavorably, including 55% of Democrats, 56% of Republicans and 59% of independents. Again, downstate suburbanites lead the state, 76%, in their unfavorable view of Santos.”

ARIZONA U.S. SENATOR. Rep. Ruben Gallego (D-AZ) announced he will run for Senate in Arizona on Monday, setting up a potential three-way race in the battleground state in 2024 that poses a threat to independent Sen. Kyrsten Sinema’s hold on the seat, the Washington Post reports.

Axios: “Sinema has yet to confirm whether she’ll run for re-election.”

Multiple media outlets report that Democratic Rep. Ruben Gallego will announce Monday that he’s running for the Senate seat held by Democrat-turned-independent Kyrsten Sinema. The incumbent herself once again declined to say if she’d seek re-election when she was asked about the news, telling a fill-in radio host, “A never-ending focus on campaign politics is why so many people hate politics.” That fill-in host was former Rep. Matt Salmon, a Republican hardliner who was briefly mentioned as a potential Senate candidate himself but recently told Axios he’s mulling a 2024 bid for mayor of Mesa.

A spokesperson for Jim Lamon, who lost the Republican primary for Arizona’s other seat last year after self-funding $18 million, meanwhile tells NBC, “Jim knows that the right Republican could have beaten [Democratic Sen. Mark] Kelly and will get elected to the US Senate in 2024. If a winning candidate emerges, he will strongly back that person — if not, Jim will run in 2024.” Blake Masters, who beat Lamon 40-28, is considering another Senate bid this cycle, and we’re quite certain Lamon doesn’t think he’s “a winning candidate” this time.

NEW YORK U.S. SENATOR. A spokesperson for Rep. Alexandria Ocasio-Cortez declined to comment when the New York Times asked if the progressive favorite was interested in waging a Democratic primary bid against Sen. Kirsten Gillibrand, though reporter Nicholas Fandos says there’s no sign AOC is laying the groundwork for a challenge. Fandos also notes that the congresswoman last cycle “allowed a similar bubble of speculation to build” when asked if she’d go up against Democratic leader Chuck Schumer, though she never signaled she was seriously considering the idea.

On the Republican side, Fandos writes that allies of 2022 gubernatorial nominee Lee Zeldin say they’ve “discounted the chances” he’d take on Gillibrand. Zeldin himself said he was getting calls about “various positions in government” and had no “update on that front to announce at this time.”

VIRGINIA U.S. SENATOR. Democratic Sen. Tim Kaine said Friday he’d seek a third term, an announcement that came after much speculation about his plans. Kaine begins as the favorite in a commonwealth that Biden took 54-44 and where Republicans haven’t won a single statewide federal race since George W. Bush carried it in 2004. There has been some speculation that Republican Gov. Glenn Youngkin could take on Kaine, though he’s shown no obvious interest in a Senate bid.

One person who Politico says is considering challenging Kaine, though, is Navy veteran Hung Cao, who was the party’s 2022 nominee against Rep. Jennifer Wexton in the 10th Congressional District. Cao raised $3.3 million for a campaign to take back a once-competitive Northern Virginia constituency that supported Biden 58-40 and held her to a 53-47 victory.

WEST VIRGINIA U.S. SENATOR and GOVERNOR. The Daily Beast’s Sam Brodey writes that, as everyone waits to see if Democratic Sen. Joe Manchin will seek another term, “There seems to be a belief that there’s an equal chance he runs for re-election, runs for governor, or retires for good after spending decades in office.” This is the first we’ve heard about the possibility of Manchin, who served as governor from 2005 until he was elected to the Senate in 2010, trying to reclaim his old job next year, though Manchin flirted with the idea for months in both 2015 and 2019.

NBC’s Chuck Todd went on to ask Manchin about his plans Sunday. After the senator deflected questions about whether he’d seek re-election as a Democrat if he ran, this exchange followed:

No matter what, we may have a lot of uncertainty left ahead of us: One of Manchin’s former top aides, Jonathan Kott, tells Brodey, “He’ll talk to West Virginians and his family and make up his mind next year.” We may find out well before then if Republican Attorney General Patrick Morrisey, whom Manchin beat 50-46, will seek a rematch, run for governor, or campaign for re-election. Morrisey tells Politico he “will decide on a pathway” by April.

“By week’s end, the Republican National Committee is set to resolve a bitter leadership feud that has exposed perilous divisions within the institution charged with electing the next GOP president,” the AP reports.  “Those inside the fight believe the days ahead of Friday’s secret ballot at a luxury seaside resort could get even uglier as rebel forces within former President Donald Trump’s ‘Make America Great Again’ movement threaten to upend RNC Chair Ronna McDaniel’s reelection bid.”

Daily Beast: “The last election couldn’t have gone any worse for Pennsylvania Republicans: the top of their ticket—Senate candidate Mehmet Oz and gubernatorial candidate Doug Mastriano—wiped out spectacularly, casting this swing state in a definitively blue hue.”

“After months of soul-searching over their disappointing outcomes, Keystone State Republicans are convinced they simply had the wrong candidates—and believe they can get revenge if they just put forward the right one.”

“When it comes to the crucial race for Senate in 2024, many Republicans in Pennsylvania and Washington believe the search is already over. They are already homing in on David McCormick, the immensely wealthy hedge fund baron who ran in 2022, as their silver bullet.”

Washington Post: “Many of the state’s lawmakers and political operatives, and even some of his previous supporters, are not ready to pick a presidential candidate. They find themselves divided between their support for Trump, their desire for a competitive nomination fight in the state and their allegiance to two South Carolina natives, former governor Nikki Haley and Sen. Tim Scott, who have taken steps to challenge Trump for the nomination.”

Politico: “Americano Media, which launched in March, is embarking on an aggressive expansion plan to shape center-right Hispanic opinion during the upcoming election cycle.”

“The network has hired more than 80 Latino journalists and producers, are expanding their radio presence to television, and by the end of the year will have studios in Miami, Las Vegas and D.C. with reporters covering the White House, Congress and embedding in 2024 presidential campaigns.”

“More than two months after enduring humbling midterm losses, Democrats in Florida are in a state of disorder, with no clear leader, infrastructure, or consensus for rebuilding, according to interviews with more than a dozen organizers, former lawmakers, donors and other leaders,” the Washington Post reports.

“These factors have compounded their worries about Democrats outside Florida all but writing off the nation’s third most populous state, which was once seen as a marquee battleground.”

MISSISSIPPI GOVENROR. “Democrats in Mississippi are feeling optimistic that their party will be able to oust Gov. Tate Reeves (R) from the governor’s mansion this fall after Democrat Brandon Presley’s recent entry in the race,” The Hill reports.

“Reeves has suffered from low approval ratings and has been name-checked at times in the state’s long-running welfare scandal, but the governorship has proved elusive for Democrats in the red state for decades.”

Said Democratic strategist Brannon Miller: “There is not a better retail politician in the state of Mississippi, period. He knows how to connect with voters. He knows how to listen to voters, which I think is an underrated skill in a politician.”

OHIO U.S. SENATOR. Sen. Sherrod Brown (D-OH) “has hired a former communications aide to manage his 2024 reelection campaign, a major formal step toward preparing for what’s expected to be one of the country’s most closely watched Senate races,” the Cleveland Plain Dealer reports.

KENTUCKY GOVERNOR. Meeting Street, working on behalf of Attorney General Daniel Cameron, has released the first poll we’ve seen in months of the May Republican primary to take on Democratic Gov. Andy Beshear, and it unsurprisingly has him well ahead. Cameron takes 39% while two rivals, former Ambassador to the United Nations Kelly Craft and state Agriculture Commissioner Ryan Quarles, are far back with 8% each.

NORTH CAROLINA GOVERNOR. Attorney General Josh Stein, who so far has the Democratic primary to himself, has unveiled endorsements from Reps. Valerie Foushee and Kathy Manning since he launched his campaign on Wednesday.

WEST VIRGINIA GOVERNOR. Huntington Mayor Steve Williams on Friday expressed interest in seeking the Democratic nomination for governor, saying, “It’s on the table for active consideration.” Williams campaigned for the now-defunct 3rd Congressional District during the 2018 cycle but dropped out before the primary.