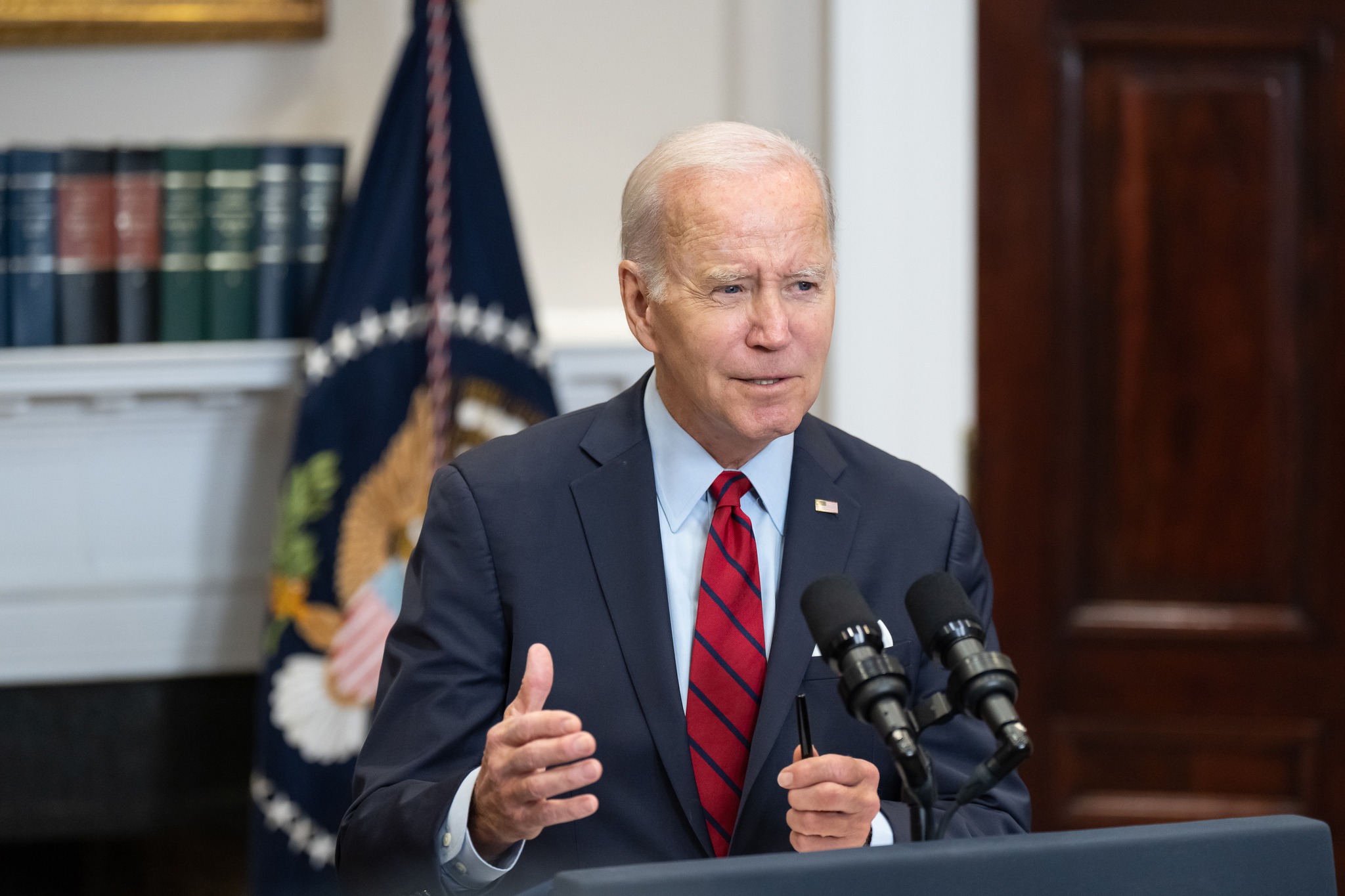 “The search of Mr. Biden’s home lasted about 12 hours and ‘covered all working, living and storage spaces in the home,’ Mr. Bauer said in the statement. The six items taken included some papers from Mr. Biden’s tenure in the U.S. Senate, where he served for 36 years. Others came from his time as vice president.”

“Strong majorities of Americans believe that both President Joe Biden and former President Donald Trump acted inappropriately when it came to their handling of classified documents, but in weighing their severity, a plurality of the public believes Trump’s actions were more serious,” a new ABC News/Ipsos poll finds.

“Over three-quarters of the public, 77%, feel that Trump acted inappropriately in the way he handled classified files, while 64%, say the same of Biden. Condemnation expectedly aligns along party lines, with 96% of Democrats saying that Trump’s handling of classified documents was not appropriate compared to 47% of Republicans.”

“Ron Klain, the White House chief of staff who has steered President Biden’s administration through two years of triumphs and setbacks, is expected to step down in coming weeks in the most significant changing of the guard since Mr. Biden took office two years ago,” the Washington Post reports.

“Mr. Klain has been telling colleagues privately since the November midterm elections that after a grueling, nonstop stretch at Mr. Biden’s side going back to the 2020 campaign, he is ready to move on, according to senior administration officials, and a search for a replacement has been underway.”

“Jeff Zients, who ran President Biden’s Covid-19 response effort and served in high-ranking roles in the Obama administration, is expected to replace Ron Klain as the next White House chief of staff,” CNN reports.

“While Zients is not viewed as a political operator, his deep experience inside two administrations and his reputation for technocratic skill would likely serve as assets at a time when both are viewed as critical for what Biden faces in the year ahead. Still, he will be tasked with replacing an official who was a central force inside the administration – and someone with a rapport developed over decades with Biden himself.”

Washington Post: “Zients comes into the job with a vastly different profile than Klain: His first government job was during the Obama administration, and he has spent most of his career in the private sector. He has only ever worked in the executive branch. His personal Twitter account has no posts.”

The White House noted that Biden “looks forward” to their meeting but said the debt limit “is not a negotiation… Congress has always done it, and the President expects them to do their duty once again.”

Washington Post: “The Biden administration is focused on pressing the GOP to unveil a debt limit plan that includes spending cuts, with the hope that such a proposal will prove so divisive among Republicans that they are forced to abandon brinkmanship. This strategy stems in part from the belief among White House officials that it would be enormously risky either to negotiate policy with the GOP on the debt limit or try to solve it via executive order — and they appear willing to put that premise to the test.”

Key point from Matthew Continetti: “Republicans enter the debt ceiling fight with no leader, no strategy, and no specific proposal.”

New York Times: “The United States hit its $31.4 trillion legal limit on borrowing this past week, putting Washington on the brink of another fiscal showdown. Republicans are refusing to raise that limit unless President Biden agrees to steep spending cuts, echoing a partisan standoff that has played out multiple times in the last two decades.”

“But America’s ballooning debt is the result of choices made by both Republicans and Democrats. Since 2000, politicians from both parties have made a habit of borrowing money to finance wars, tax cuts, expanded federal spending, care for baby boomers and emergency measures to help the nation endure two debilitating recessions.”

“Treasury Secretary Janet Yellen is ruling out a potential proposal from House Republicans that calls for triaging payments after the exhaustion of ‘extraordinary measures’ to avoid default on the federal debt,” Axios reports.

“Yellen said Friday that any failure to pay a government bill would constitute a debt default, insisting that her department doesn’t have the ‘systems’ to prioritize debt payments.”

“Senior U.S. officials are advising Ukraine to hold off on launching a major offensive against Russian forces until the latest supply of U.S. weaponry is in place and training has been provided, a senior Biden administration official said on Friday,” Reuters reports.

New York Times: “The billions of dollars in new arms for Ukraine announced this month — including British tanks, American fighting vehicles and howitzers from Denmark and Sweden — are testament to President Vladimir V. Putin’s failure to split the NATO allies after nearly a year of war. But small yet significant fractures are getting too big to hide.”

“The differences are over strategy for the coming year and the more immediate question of what Ukraine needs in the next few months, as both sides in the war prepare for major offensives in the spring. And while most of those debates take place behind closed doors, Britain’s impatience with the current pace of aid and Germany’s refusal to provide Leopard 2 tanks to Ukraine broke out into public view this week.”

Russia is sending drug addicts to war in an effort to meet its mobilization quota, the Jerusalem Post reports.

“Last spring and summer, employees of the Supreme Court were drawn into an investigation that turned into an uncomfortable awakening,” the New York Times reports.

“As the court marshal’s office looked into who had leaked the draft opinion of the decision overturning the constitutional right to abortion, law clerks who had secured coveted perches at the top of the judiciary scrambled for legal advice and navigated quandaries like whether to surrender their personal cellphones to investigators.”

“The U.S. has the highest maternal mortality rate among developed nations, and government officials and health experts are concerned that conditions will worsen now that a federal right to abortion has been struck down.”

“Federal Reserve officials are preparing to slow interest-rate increases for the second straight meeting and debate how much higher to raise them after gaining more confidence inflation will ease further this year,” the Wall Street Journal reports.

“The Justice Department is signaling that it has the right to not cooperate with Hill Republicans’ requests to peek into their ongoing investigations,” Politico reports.

“The Justice Department letter cites a 1982 directive from President Ronald Reagan, stressing that the administration would try to respond to congressional oversight requests and avoid invoking executive privilege, reserving it for use ‘only in the most compelling circumstances.’”

“Paid leave is an issue that has long eluded Congress,” the Washington Post reports.

“And a divided Congress that is expected to battle over the basic functions of government doesn’t seem like the venue for striking a deal over a new government program.”

“But a bipartisan group of House members, led by Reps. Stephanie Bice (R-OK) and Chrissy Houlahan (D-PA), are hoping to defy the odds and move the country closer to a national paid leave program.”

“A bipartisan group of senators is pushing ahead in the new Congress with efforts to reach an agreement on border security and immigration policy, after talks ran out of time last year,” the Wall Street Journal reports.

“The lawmakers recently visited the southern border in Arizona and Texas, in the face of sharp political divides over how to handle a record number of illegal crossings that have strained border staff and facilities. The lawmakers say they see an opening for compromise on an issue that has vexed Capitol Hill for decades, following last year’s bipartisan work to pass a gun-control law.”

“House Oversight Chair James Comer (R-KY) is inviting U.S. Border Patrol officials to testify before his panel during the week of Feb. 6, as the GOP House majority sharpens its inquiries into the Department of Homeland Security,” Politico reports.

“A federal judge declined Thursday to dismiss the criminal contempt of Congress charge brought against former Trump White House adviser Peter Navarro for his failure to comply with a subpoena from the House select committee that investigated the January 6, 2021, attack on the US Capitol,” CNN reports.

Union membership dropped to an all-time low in 2022 — from 10.3% of U.S. workers to 10.1% — despite a surge in organizing efforts and a more favorable view of unions that emerged during the pandemic, Politico reports.

Three active-duty Marines have been hit with federal misdemeanor charges for their alleged roles in the Capitol siege by a mob of Trump supporters, the Daily Beast reports.

Richard “Bigo” Barnett, who famously propped his feet on a desk in then-Speaker Nancy Pelosi’s Capitol suite during the January 6 riots, urged jurors to consider his behavior the actions of a “fucking idiot” — not a criminal, Politico reports.

Said Barnett: “I’m going to suffer the consequences, but I hope they see I didn’t break the law and acted like a fucking idiot.”

Rep. George Santos (R-NY) has apparently admitted to dressing in women’s clothing, TMZ reports.  Said Santos, as he was being chased by reporters: “I was young and I had fun at a festival.” However, he clarified saying he “was not a drag queen.”