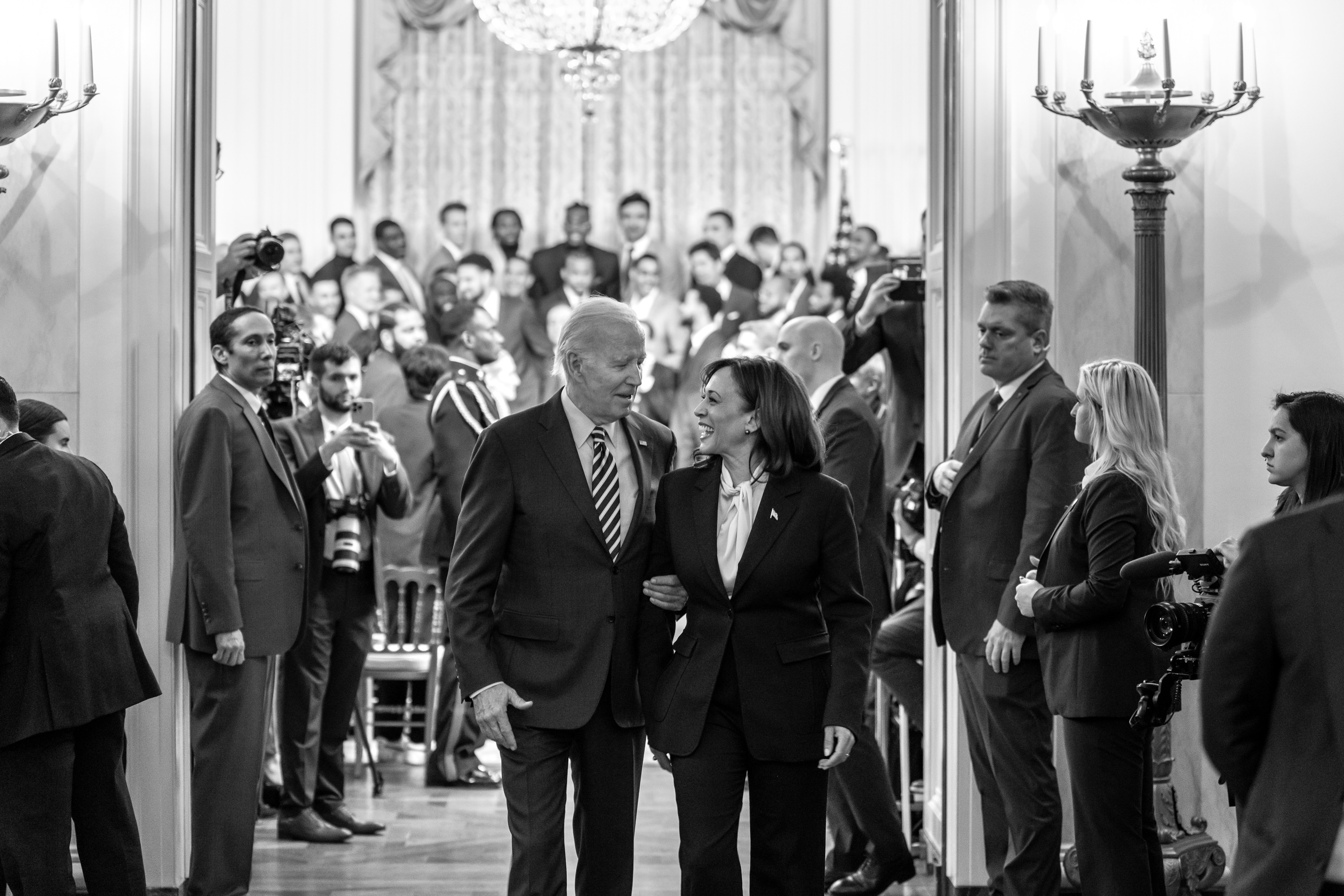 The 2022 Collaborative Midterm Survey from Cornell University — a poll of nearly 20,000 U.S. adults with large oversamples in California, Florida, and Wisconsin — was just published.

An interactive feature allows you to really dig into the results. Highly recommended.

VIRGINIA U.S. SENATOR. Sen. Tim Kaine (D-VA) has announced he will run for a third term in the Senate.

Washington Post: “Democrats had launched a full-court press in recent weeks to persuade Kaine to seek reelection as he considered his plans — and as Democrats looked ahead to numerous tough races in 2024, with control in the Senate on the line. A Kaine retirement could have created a more viable opening for Republicans in a state Gov. Glenn Youngkin (R) flipped red in 2021.”

“Grappling with an eight-year decision at age 64 is different than at age 53 or 42. It’s just a different calculation.”— Sen. Tim Kaine (D-VA), quoted by Politico, on deciding to run for re-election in 2024.

Byron York: “If she does indeed run, Haley would become the second candidate in the 2024 GOP race, after former President Donald Trump. And therein lies a problem for Haley. Less than two years ago, in 2021, Haley said she would not run in 2024 if Trump did. She did not hem or haw or use wiggle words. She said it very clearly. ‘I would not run if President Trump ran,’ Haley told reporters on April 12, 2021. Now, Trump is running, and it appears Haley is planning to run, too.”

Insider: “An Insider examination of FEC records show that the GOP has spent just under $2,000 there since Trump handed over the lease. That accounted for the hotel stays of four Republicans, including Reps. Marjorie Taylor Greene and Lauren Boebert.”

“That’s a far cry from the at least $670,000 spent by GOP officials, candidates and PACs at the hotel throughout the same five-month period in 2018 — not including revenue from bars and restaurants (including these, CREW placed the total spend at $867,000).”

“Both periods cover the busy midterm campaign seasons for their respective years.”

“A resort owned by Donald Trump is set to host a conference this spring headlined by QAnon promoters and other conspiracy theorists, marking a new connection between the ex-president and his party’s far-right fringe,” the Daily Beast reports.

WISCONSIN SUPREME COURT. Both chambers of the GOP-dominated Wisconsin legislature voted this week to place an advisory referendum on the April 4 ballot asking if “able-bodied, childless adults” should have to “look for work in order to receive taxpayer-funded welfare benefits,” a non-binding measure aimed at helping the party in the crucial state Supreme Court race that will be taking place the same day. Badger State voters that day will now also get to decide the fate of a constitutional amendment to allow judges to consider additional factors for bail.

Democratic Gov. Tony Evers, who does not have a veto over these matters, urged the state Senate on Tuesday to approve an advisory referendum asking voters if they wanted to repeal the state’s 1849 abortion ban, an idea Republicans quickly shot down. “Today was about workforce,” state Senate Majority Leader Devin LeMahieu said mere days after he and Assembly Speaker Robin Vos first proposed their advisory referendum. The Associated Press’ Harm Venhuizen notes that the state “already requires recipients of unemployment benefits to look for jobs.”

LeMahieu said that the non-binding results could, in Venhuizen’s words, “be used to back a push to require some Medicaid recipients to look for work,” but no one is under any illusions that this is about anything other than boosting the GOP’s prospects in the Supreme Court election. While that race will determine whether progressives will have a majority on the state’s highest court for the first time in a long time, this advisory opinion could help Republicans turn out conservative voters who aren’t already motivated by the massive stakes in front of them. (Voters in the 8th Senate District in the Milwaukee suburbs also have an important special election that day where the GOP’s super majority is on the line.)

In addition, the legislature voted to place the proposed constitutional amendment on the April 4 ballot that, as the Milwaukee Journal Sentinel explains, “would allow judges to consider the totality of the circumstances of a defendant, including a person’s past criminal record and the need to protect the public from ‘serious harm,’ when setting the monetary amount of bail.”

State law requires two consecutive legislative sessions to approve the same version of amendments before they can go before voters, and it cleared this hurdle last year before advancing again this week. The measure got the support of 10 Democrats in the Assembly on Thursday two days after a pair of Democratic state senators also backed it: One of those senators, Brad Pfaff, was the one Democrat in either chamber to advance the advisory referendum.

Waukesha County Circuit Judge Jennifer Dorow, who is one of the two conservatives running for the Supreme Court, quickly made it clear she was strongly in support of the amendment. Dorow, notably, presided over the high-profile trial where Darrell Brooks was sentenced to life in prison in November for killing six people at the 2021 Waukesha Christmas parade: The amendment, which was first proposed in 2017, became a GOP priority after that tragedy, with supporters highlighting how Brooks had posted a $1,000 bail for a different case two days before.

ARIZONA U.S. SENATOR. Blake Masters, to the delight of Democrats, tells the Washington Post he’s “seriously” considering running for the Senate seat held by Democrat-turned-independent Kyrsten Sinema just months after he lost Arizona’s other seat to Democratic Sen. Mark Kelly 51-45. Masters, whom the University of Virginia’s J. Miles Coleman aptly said, “comes across as a 4chan guy,” stood out in a year full of awful Republican nominees.

Among many other things, Masters called Ted Kaczynski a “subversive thinker that’s underrated” before belatedly acknowledging that it’s “probably not great to be talking about the Unabomber while campaigning.” Politico even reported in September that internal GOP polls showed Masters with a worse favorable rating than “Roy Moore’s in 2017 as the Alabama Senate nominee imploded amid reports of past sexual misconduct, including romantic pursuit of minors.”

Masters isn’t the only far-right extremist eyeing this race, as a spokesperson for Pinal County Sheriff ​​Mark Lamb reaffirms he’ll “make a decision in early 2023.” NBC reported last month that Lamb’s ally, 2022 gubernatorial nominee Kari Lake, was encouraging him to run, though she’s showed interest in getting in herself since then.

Former state Board of Regents member Karrin Taylor Robson, who narrowly lost last year’s primary to Lake, also didn’t rule anything out. She told the Post, “I am keeping my options open and deciding how I can best serve the people of Arizona.”

On the Democratic side, Rep. Greg Stanton took his name out of contention on Thursday evening. Stanton had expressed interest in taking on Sinema right after she bolted the party, but he almost certainly would have needed to go through a tough primary against fellow Rep. Ruben Gallego.

“Rep. Ruben Gallego, a former Marine combat veteran who was critical of Senator Kyrsten Sinema’s leadership and fidelity to the Democratic Party long before she announced she was leaving it to become an independent, will announce his 2024 Senate campaign to challenge her on Monday, Newsweek has learned first,” Newsweek reports.

CALIFORNIA U.S. SENATOR. Democratic Rep. Barbara Lee made her most direct public statement about California’s Senate in an email raising money for a potential bid to replace incumbent Dianne Feinstein. “I told my colleagues I’m exploring a run for Senate,” wrote Lee, who added, “If I’m going to become the only African American woman serving in the Senate, I’ll need the strongest possible grassroots team behind me.”

INDIANA U.S. SENATOR. While former Gov. Mitch Daniels tells Howey Politics he’s “[n]ot in any rush” to decide if he’ll compete in the GOP primary for Senate, longtime Daniels confidant Mark Lubbers says the decision will likely be this month or early February. If Daniels gets in, Politico writes he should expect to be on the receiving end of Donald Trump’s abuse: Trump reportedly has been labeling the 5’7 Daniels a “midget,” a word that’s long been used to slur people with dwarfism.

MICHIGAN U.S. SENATOR. The Washington Post’s Colby Itkowitz takes a look at the potential Democratic field to succeed retiring Sen. Debbie Stabenow in Michigan and relays some new details, including that unnamed party insiders anticipate that Rep. Elissa Slotkin will run “in the near future.” A Slotkin campaign would mean an open seat race for her 7th Congressional District, a constituency in the Lansing area and northwestern Detroit exurbs that Biden took by a tiny 49.4-48.9 margin.

A Slotkin Senate bid could make it considerably less likely that state Sen. Mallory McMorrow, who is close to the congresswoman, gets in as well: McMorrow herself didn’t rule anything out when asked by the Michigan Advance’s Andrew Roth, but she said of her current role, “I am right where I need to be right now.” Another Democratic congresswoman, Haley Stevens, also spoke about the race for the first time and told the Post that her allies want her to run but “I’m not ready to say anything right now.”

A source, meanwhile, tells Itkowitz that Secretary of State Jocelyn Benson “is taking a serious look” at the Senate race even though she didn’t seem particularly interested less than two weeks ago. Benson, when asked about the contest then, said, “My eyes are focused actually on 2024, not as a candidate, but as someone who will be working to protect the voice and the vote of every citizen in our state.” That statement, however, was not a definitive no.

Former Rep. Brenda Lawrence, who decided to retire last year, also said for the first time she may try to return to Congress by campaigning for the Senate. Lawrence said she wanted a “strong African American to run,” and may do it herself if a serious contender doesn’t emerge. Lt. Gov. Garlin Gilchrist, who like Lawrence is Black, is considering, but he hasn’t announced a decision yet.

However, while 2018 gubernatorial candidate Abdul El-Sayed didn’t quite say no last week, the incoming Wayne County health department director made it clear to Roth he would pass on the race by saying, “This isn’t my race.” On the GOP side, former Lt. Gov. Brian Calley gave an indisputable no when he said, “There’s a 0.0% chance that I will even entertain running–for any office, actually, but especially one in Washington, D.C.”

PENNSYLVANIA U.S. SENATOR. While Republican insiders tell the Philadelphia Inquirer that self-funder Dave McCormick is making moves to prepare for a potential bid against Democratic Sen. Bob Casey, including interviewing media firms, it may be a while before he decides if he’ll go for it. Reporter Jonathan Tamari writes that “even those optimistic about a McCormick run say they expect he’ll wait until summer, at least, to make any formal decisions.” McCormick lost last year’s primary for Pennsylvania’s other Senate seat to Mehmet Oz by 950 votes.

MISSISSIPPI GOVERNOR. Siena College, working on behalf of Mississippi Today, gives us our first poll of this year’s contest for governor, and it shows Republican incumbent Tate Reeves starting with a small 43-39 edge over his likely Democratic opponent, Public Service Commissioner Brandon Presley. The survey was completed days before Presley announced he would campaign for the state’s top job.

The school also finds Reeves with a stronger 52-29 edge in a hypothetical primary rematch against former state Supreme Court Chief Justice Bill Waller Jr., whom he defeated 54-46 in 2019. Waller is one of a few notable Republicans who are talking about taking on Reeves, but no one has decided on anything ahead of the Feb. 1 filing deadline.