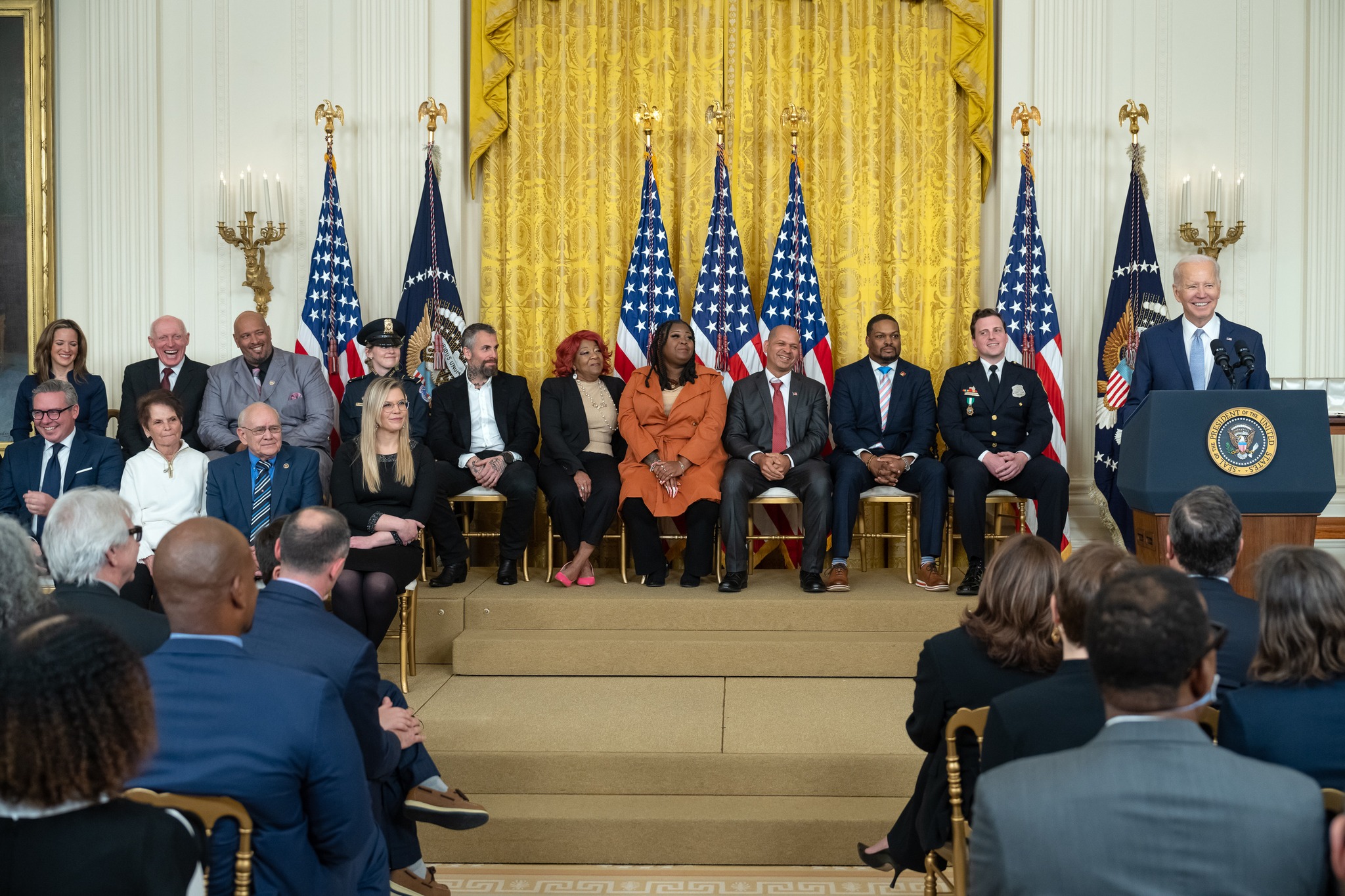 While December 2022 prices were up 6.5% from a year earlier, a Wall Street Journal analysis of Labor Department data indicates that annual growth has eased to levels that existed before the pandemic.

Inflation observed during the past six months would extend to prices rising 1.9% over the course of a year, close to the average annual rate of 1.7% between 2010 and 2020.

“Germany dashed Ukrainian hopes that Berlin would finally decide on Friday to send modern battle tanks to Kyiv’s forces, with German Defense Minister Boris Pistorius arguing there was no international agreement yet on the topic,” Politico reports.

“An American Navy SEAL was killed this week during Russia’s assault on eastern Ukraine while fighting alongside Ukrainian forces,” Time reports.

“Daniel Swift, a Navy Special Warfare Operator First Class who had gone AWOL, died after suffering injuries with a unit under attack by Russia.”

“A bipartisan trio — Sens. Lindsey Graham (R-SC), Richard Blumenthal (D-CT) and Sheldon Whitehouse (D-RI) — traveled to Ukraine, where they met with President Volodymyr Zelensky and vowed to press Congress to send additional resources as quickly as possible to fend off Russia,” Politico reports.

“An ally of President Vladimir Putin warned NATO on Thursday that a defeat of Russia in Ukraine could trigger a nuclear war, while the head of the Russian Orthodox Church said the world would end if the West tried to destroy Russia,” Reuters reports.

“Such apocalyptic rhetoric is intended to deter the U.S.-led NATO military alliance from getting even more involved in the war, on the eve of a meeting of Ukraine’s allies to discuss sending Kyiv more weapons.”

“But the explicit recognition that Russia might lose on the battlefield marked a rare moment of public doubt from a prominent member of Putin’s inner circle.”

Said Dmitry Medvedev: “The defeat of a nuclear power in a conventional war may trigger a nuclear war.”

“CIA Director William Burns traveled in secret to Ukraine’s capital at the end of last week to brief President Volodymyr Zelensky on his expectations for what Russia is planning militarily in the coming weeks and months,” the Washington Post reports.

“Top of mind for Zelensky and his senior intelligence officials during the meeting was how long Ukraine could expect U.S. and Western assistance to continue following Republicans’ takeover of the House and a drop-off in support of Ukraine aid among parts of the U.S. electorate.”

Gregory Morey, who once was a roommate of Rep. George Santos (R-NY), told CBS News that Santos wanted to be in Congress so he could get a pension and health care for the rest of his life.

Santos will need five years of service to be eligible for a pension.

Peggy Noonan: “He shouldn’t be in Congress. We all know this. It’s not good enough to say they’re all con men. Even in Congress there are degrees. This one’s a pro, a menace, a total, not partial, fraud. If he has any qualifications for public office they haven’t emerged. He is a bad example for the young: Cheating works. He is an embarrassment to the old. He is an insult to the institution.”

“Getting rid of him will ‘take time,’ we are counseled—ethics investigations, campaign finance probes. But the entire Republican leadership, while not quite embracing him, has been happy to use him. He voted for Kevin McCarthy for speaker. He was appointed to two committees.”

“They are going this route because they have a majority of five votes and think they can’t afford to lose even one. Especially a particularly malleable one who’ll do anything leadership asks! But in the meantime Mr. Santos is allowed to put his own poisonous imprimatur on all of them, on every initiative and bill, on everything they do.”

Politico: Even Santos’ far-right allies are seeking distance from him.

“Rep. George Santos (R-NY) has claimed that reports and videos documenting him performing in drag are both ‘outrageous’ and ‘categorically false,’” Politico reports.

“But nearly a dozen years ago, Santos himself appears to have confirmed that he participated in drag shows while he was a teenager living in Brazil.”

“A Wikipedia page… shows a user named Anthony Devolder — a Santos alias — writing that he “startted [sp] his ‘stage’ life at age 17 as an gay night club [sp] DRAG QUEEN and with that won sevral [sp] GAY ‘BEAUTY PAGENTS [sp].’”

“President Joe Biden plans to nominate four people to federal judge positions on Wednesday, including a red state district court nominee who has the required support of their state’s Republican senators – essential endorsements that previously proved to be a challenge for the Democratic administration,” CNN  reports.

“Despite concluding that Gov. Ron DeSantis violated the Florida Constitution and the First Amendment when he suspended Hillsborough State Attorney Andrew Warren last year, a federal judge ruled Friday that he didn’t have the power to restore Warren to office,” the Miami Herald reports.

“Former President Donald Trump on Friday morning voluntarily dropped a longshot federal lawsuit in Florida against New York’s attorney general — a day after the same judge in the case sanctioned him and his lawyer nearly $1 million for filing another, ‘frivolous’ lawsuit against Hillary Clinton and many other defendants,” CNBC reports.

“The Supreme Court’s internal investigation into who leaked a draft of the opinion overturning Roe v. Wade, the 1973 decision that had established a constitutional right to abortion, included interviews with all nine justices,” the New York Times reports.

A 20-page report released yesterday “disclosed that the investigation had not turned up the source of the leak while leaving ambiguous whether it had extended to grilling the justices themselves.”

“Sen. Joe Manchin (D-WV) has played a role steering millions of dollars in federal funds to organizations linked to his wife Gayle Manchin over the past several years,” Fox News reports.

“The West Virginia lawmaker has helped ensure funding reached at least three organizations where his wife worked at the time, and another group that indirectly benefited a fourth organization linked to his wife.”

“By ruling against the appointment of Shas leader and Deputy Prime Minister Arye Dery, the judges have turned what was already the most controversial issue facing the new government – its plans to weaken the power of the Supreme Court – into a time-bomb ticking away on Netanyahu’s desk. He has few courses of action open to him now, and none of them are simple.”

“Xi Jinping has expressed concern about the spread of Covid-19 to rural China on the eve of the lunar new year, in the Chinese president’s most direct acknowledgment of the worsening health crisis since suddenly abandoning his zero-Covid strategy in early December,” the Financial Times reports.

Meanwhile, The Guardian notes Chinese cyber authorities have announced an internet censorship crackdown to ensure there are no “gloomy sentiments” caused by pandemic “rumors” during the lunar new year festival.

“Hope I leave New Zealanders with a belief that you can be kind but strong, empathetic but decisive, optimistic but focused… that you can be your own kind of leader, one who knows when it’s time to go.” — New Zealand Prime Minister Jacinda Ardern, announcing her resignation.

“Far-right networks around the world reacted jubilantly to Jacinda Ardern’s shock resignation as New Zealand’s prime minister Thursday, in the continuation of a global hate campaign that experts say likely played a role in her departure,” Vice News reports.

“Ardern, who gained an unprecedented global profile for a New Zealand politician since becoming the country’s youngest-ever prime minister at the age of 37 in 2017, held back tears as she announced she was standing down next month as she no longer felt able to meet the demands of the job.”

Rep. Greg Steube (R-FL) spent the night in an intensive care unit after he was “knocked” off the ladder while cutting tree limbs on his property late Wednesday afternoon. Steube’s injuries “are still under assessment but not life threatening at this time.”

Said Boebert: “Joe Biden has failed the American people, and he’s keeping some members from calling for impeachment by having a historically unpopular vice president.”

“House Republicans hope a strict, new voting schedule will help juice their slim majority — as only a handful of missed votes could change the game,” Axios reports.

“Sickness, surgeries, funerals and other events calling House members away from D.C. will have higher stakes than ever with historically tight margins and no more proxy voting.”

Former CIA Director and Secretary of State Mike Pompeo spotlights his clandestine 2018 trip to North Korea as he met for the first time with the totalitarian regime’s dictator, Kim Jong Un, in the first chapter of his new memoir, Fox News reports.

Writes Pompeo: “This small, sweating, evil man tried to break the ice with all the charm you would expect from a mass murderer. ‘Mr. Director,’ he opened, ‘I didn’t think you’d show up. I know you’ve been trying to kill me.’ My team and I had prepared for this moment, but ‘a joke about assassination’ was not on the list of ‘things he may say when he greets you.’ But I was, after all, director of the CIA, so maybe his bon mot made sense.”

“I decided to lean in with a little humor of my own: ‘Mr. Chairman, I’m still trying kill you.’ In the picture taken seconds after that exchange, Kim is still smiling. He seemed confident that I was kidding.”