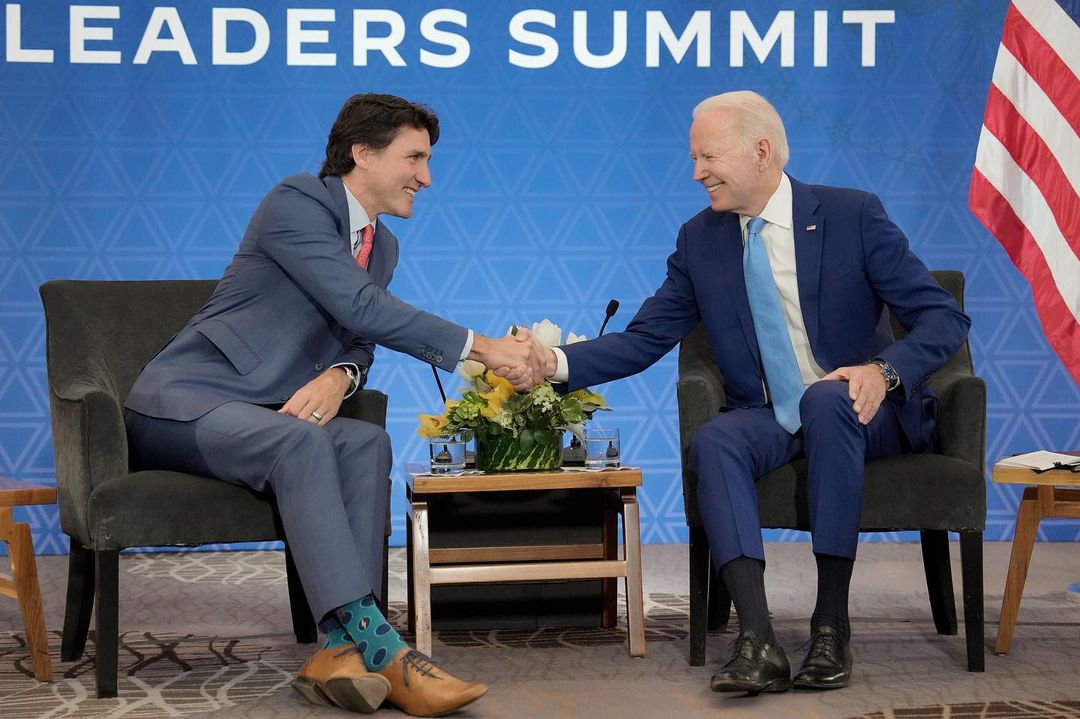 A new Quinnipiac poll finds that 53% of Americans disapproved of the way the Republicans in the House of Representatives handled the choosing of Speaker, while 32% approved.

But in a head-to-head matchup against DeSantis — who is still not as well-known to voters — Biden gets 42% of the theoretical vote compared to 45% for the Florida governor, which is essentially a statistical tie.

Former Sen. Kelly Loeffler (R-GA) “wasn’t on any ballot in 2022, but she was deeply involved in the election anyway through a series of new organizations, millions in GOP-focused donations, and today, a 30-page after-action report on what she says worked for Republicans in Georgia and what didn’t,” the Atlanta Journal Constitution reports.

“Key to Republican wins in 2022, the report says, were a Loeffler-sponsored year-round registration and mobilization effort, messaging about Georgia Republicans’ election law overhaul through Senate Bill 202, and having Gov. Brian Kemp at the top of the GOP ticket.”

“Not mentioned in the report at all is Herschel Walker’s campaign, the lone statewide loss for the GOP.”

MICHIGAN U.S. SENATOR. Rep. Elissa Slotkin (D-MI), who is weighing a U.S. Senate run in Michigan, attended Martin Luther King Jr. weekend events in Detroit and Grand Rapids — neither of which is in her House district.

“Gov. Larry Hogan (R) will leave office Wednesday with the same stratospheric job approval ratings that he’s enjoyed for most of his time in office,” Maryland Matters reports.

“A recent poll conducted for Gonzales Research & Media Services, an Arnold-based polling firm, showed Hogan leaving office with an eye-popping 77% of Marylanders approving of the job he’s doing as governor.”

“In the poll, Hogan had an astonishing 81% job approval rating among Democrats — 13 points higher than it was among Republicans.”

Ronna McDaniel told Semafor that she had “well enough support to win” a fourth and final term at the RNC’s winter meeting next week and that her decisive bloc of 100 out of 168 voting members who’d publicly vowed to support her early in the process remained committed.

“Well, I can honestly say I like both of them. I mean, I get along with both of them. I haven’t taken a stance, you know, let them fight it out.” — Donald Trump, refusing to endorse current RNC chair Ronna McDaniel over challenger Harmeet Dhillon.

“Gov. Ron DeSantis (R-FL) has built his national profile, and possibly a future presidential run, on challenging major companies on controversial social issues,” the Washington Post reports. “But some of those same companies and their lobbyists bankrolled his inaugural festivities this month.”

Said Trump: “So, now I hear he might want to run against me. So, we’ll handle that the way I handle things.”

Jonathan Martin: “Yet what was even more of a thrill to the donors than Carbone’s signature spicy rigatoni was what happened during the dinner: DeSantis and his wife, Casey, went table to table greeting and thanking the attendees.”

“Such a gesture would hardly be noteworthy for most politicians. But the early rap on DeSantis from his fellow Republicans is that, for all his smarts and shrewdness, he lacks charm, and is either unwilling or unable to submit to the longstanding rituals of retail politics.”

“So the mere fact that he table-hopped at a dinner in his honor — and that more than a few of his contributors were thrilled enough about the personal touch to recount it to me after the closed-press fete — is revealing.”

Harpers: “DeSantis may indeed be the chosen leader of the non-MAGA right, but he has been careful to maintain a Trumpian populist image. In 2018, during his first campaign for governor, he professed his intent to ‘drain the swamp in Tallahassee, which needs to be drained, just like Washington.’ This past September, he told the National Conservatism Conference of his determination to confront the ‘Masters of the Universe,’ who, ‘not content to line their pockets, not content to make huge profits, want to use their power to change society.’”

“But throughout his time in office, DeSantis has done his best to line corporate pockets, an approach that has been well rewarded—sometimes spectacularly so.”

NORTH CAROLINA GOVERNOR. “North Carolina Attorney General Josh Stein (D) launched a 2024 bid for governor Wednesday with an announcement video that draws parallels between the 1971 firebombing of the office of his father, a civil rights lawyer, in Charlotte, and two more recent events: the 2017 white-supremacist rally in Charlottesville and the Jan. 6, 2021, riot at the U.S. Capitol in Washington,” the Washington Post reports.

Stein refers to participants in the latter two events as “a different set of bomb throwers who threaten our freedoms and our future.”

“The video quickly contrasts Josh Stein with North Carolina Lt. Gov. Mark Robinson (R), who was elected separately from Cooper and is a likely GOP gubernatorial contender in 2024.”

Politico: “With Mike Braun retiring from the Senate to run for governor in the Hoosier State, Banks is maneuvering to overwhelm any opposition early. But the four-term congressman and his allies are still preparing for a possible clash with Mitch Daniels, a two-term governor of the state who is weighing a bid of his own.”

“There’s more on the line than just a safe red seat. After November midterm voters rebuked several Trump-aligned candidates, the GOP is wrestling with its identity.”

CALIFORNIA 47TH DISTRICT. “Rep. Katie Porter (D-CA) has taken sides in the primary for her House seat, backing state Sen. Dave Min as he jumped into the race on Wednesday,” NBC News reports.

“Porter is leaving her competitive House district to run for Senate, and Min already represents much of the 47th District in his current state Senate seat.”

New York Times: “In an intriguing show of détente, the Republican National Committee has asked several major TV networks — including CNN, a regular Republican boogeyman — to consider sponsoring debates, an early sign that the party is making plans for a contested presidential primary.”

“The debates would probably begin this summer, and Republicans are casting a wide net: Party officials are also in talks with executives from ABC, CBS, NBC and Fox News, along with more-niche networks like Newsmax and NewsNation… Political debates are highly prized in the TV news industry and the networks are expected to present proposals next month.”

“Mounting a comeback for the White House, Donald Trump is looking to regain control over his powerful social media accounts,” NBC News reports.  “With access to his Twitter account back, Trump’s campaign is formally petitioning Facebook’s parent company to unblock his account there after it was locked in response to the U.S. Capitol riot two years ago.” Meanwhile, over on Truth Social, Trump this morning compared the FBI to the Gestapo and said that “Marxist thugs” were in charge.

“Donald Trump will be joined by two of his highest-profile South Carolina supporters — U.S. Sen. Lindsey Graham and Gov. Henry McMaster — at the first public campaign event of his 2024 White House bid later this month in the early voting state,” the AP reports.

“A group of prominent Michigan Republicans are encouraging Florida Gov. Ron DeSantis to jump into the 2024 presidential race — a significant and thinly veiled shot at the only announced Republican candidate: former President Donald Trump,” Politico reports.

“The furor over President Biden’s handling of sensitive documents could have an unexpected beneficiary: Florida Gov. Ron DeSantis (R),” The Hill reports.

“The reason is simple. While the controversy self-evidently makes Biden more vulnerable, it also ensures endless mentions of former President Trump’s own troubles with apparently classified documents at Mar-a-Lago.”

“Matt Schlapp, the head of one of the nation’s largest conservative advocacy groups and an adviser to former President Donald Trump, was accused in a lawsuit on Tuesday of groping an employee on Herschel Walker’s Senate campaign in October,” the New York Times reports.

“The lawsuit, filed in the Virginia Circuit Court in Alexandria, accuses Mr. Schlapp of ‘aggressively fondling’ the man’s ‘genital area in a sustained fashion’ while the two were alone in a car.”

Texas Monthly: “A status akin to royalty had coalesced in Texas, and the family set up shop—twice—in the White House. Then, as a harsher style of politics gained favor, it all fell apart. Today, a future Bush dynasty looks even more unlikely than it did fifty years ago.”

Politico on Vice President Harris: “She no longer is tied to the whims of an evenly split Senate, where she had been called to cast more than two dozen tie-breaking votes. And they say she no longer feels her every move is being eyed in the context of a potential 2024 Harris presidential campaign since her boss is highly likely to seek another term.”

ALASKA STATE HOUSE. “The first day of Alaska’s legislative session ended with the House still in disarray — with no speaker elected and no clear idea of who will form the chamber’s majority,” the Anchorage Daily News reports.

“Members of the Legislature were sworn in Tuesday, but the House’s 21 Republicans, 13 Democrats and six independent members were unable to reach the 21-representative threshold needed to elect a speaker and set an agenda for the chamber.”