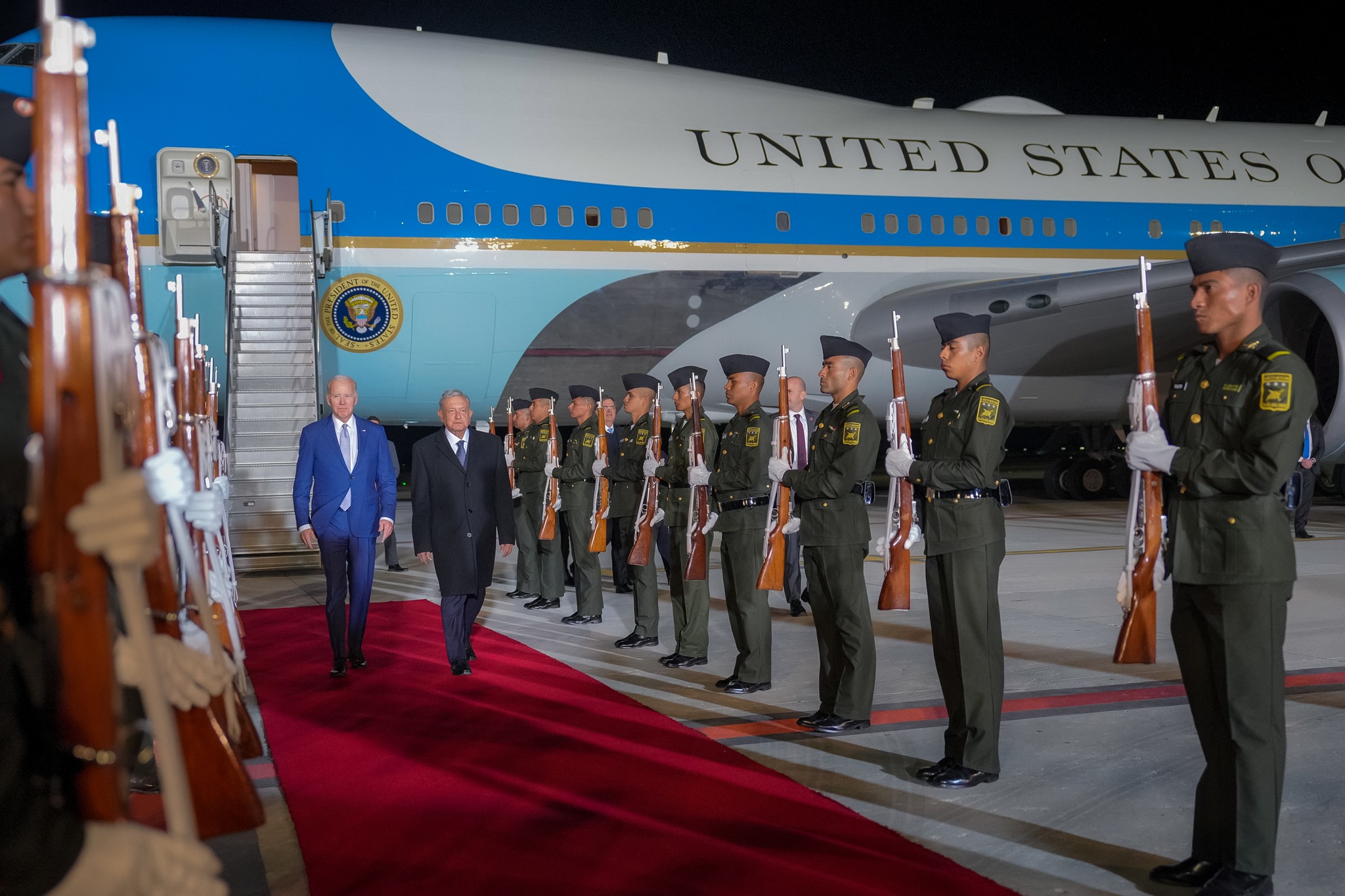 The Wall Street Journal editorial page issues a warning: “The problem is that the House GOP faces an imbalance of political forces. Their majority is only five, which will shrink to four if Rep. George Santos is forced to resign. Democrats hold the Senate and the White House. All of Wall Street, bond investors, the credit-rating agencies and the financial world will be warning of debt-limit doom. The press will side as usual with the Democrats. Maintaining GOP unity as the political pressure builds will make the vote for Speaker look easy…”

“All of which means Republicans will have to pick their spending targets carefully, explain their goals in reasonable terms so they don’t look like they want a default, and then sell this to the public as a united team. The worst result would be for Republicans to talk tough for months, only to splinter in a rout at the end, and be forced to turn the House floor over to Democrats to raise the debt limit with nothing to show for it. Opportunists on the right would then cry ‘sellout,’ even if they had insisted on demands that were unachievable.”

Catherine Rampell: “Now, should Democrats have dealt with the debt limit while they still controlled both chambers of Congress? Yes. Absolutely. If we breach the debt ceiling in the coming months, their failure to do so could turn out to be the biggest tactical blunder of the Biden era.”

“Even if Democrats erred in not neutralizing this bomb when they had the chance, though, blame for any subsequent carnage should be on the maniacs lighting the fuse.”

“Gosh, come on y’all. You’ve got to do a better job when shit like this happens.”— Former Sen. Doug Jones (D-AL), quoted by CNN, on how the White House is handling news that Joe Biden had classified documents at his home before he became president.

CNN: “Biden himself has chafed at how much he is able to reveal publicly, telling reporters twice last week he hoped to say more.”

“Behind the scenes, sources said Biden’s grown frustrated at how the saga has played out, particularly the way his administration’s handling of the story has overtaken what had been a positive stretch.”

Jonathan Last: “The only reason we know that Biden improperly possessed classified documents is because Biden’s lawyers discovered the documents and immediately reported the breach.”

“In the case of Trump, someone dropped a dime to the feds that Trump was holding on to docs. The government asked for them back. Trump refused to surrender them. He submitted false assurances that he did not possess them. Then he (falsely) insisted that the documents belonged to him. That’s why the FBI came and took the documents by force.”

“China said on Saturday it had recorded almost 60,000 Covid-related deaths between December 8 and January 12, and the current wave has already peaked,” the South China Morning Post reports.

“It is the first time China has released a death toll since its abrupt pivot away from the zero-Covid policy last month.”

“China’s economy grew at one of its slowest rates in decades last year as repeated lockdowns hammered households and businesses, emphasizing the high cost of zero-tolerance Covid-19 policies that Beijing abruptly abandoned at the end of 2022,” the Wall Street Journal reports.

“The world’s most populous country has reached a pivotal moment: China’s population has begun to shrink, after a steady, yearslong decline in its birthrate that experts say will be irreversible,” the New York Times reports.

“The government said on Tuesday that 9.56 million people were born in China in 2022, while 10.41 million people died. It was the first time deaths had outnumbered births in China since the early 1960s, when the Great Leap Forward, Mao Zedong’s failed economic experiment, led to widespread famine and death.”

Speaker Kevin McCarthy (R-CA) claimed in a MSNBC interview that he “always had a few questions” about the now infamous resume of Rep. George Santos (R-NY).

Jonathan Bernstein: “We wouldn’t be losing much to have the House cameras focused on the podium. Most of the time, roving cameras would reveal little beyond a handful of representatives engaging in debate in the front of the chamber while most seats on the floor remain empty.”

“That would look bad for the House. But it would be worse if members felt compelled because of the cameras to come to the floor just to listen to each other talk. As Woodrow Wilson wrote (when he was a political scientist, and before he became a terrible president), ‘Congress in session is Congress on public exhibition, whilst Congress in its committee rooms is Congress at work.’”

“That’s still true today. Modern political scientists would add to ‘committee rooms’ what takes place in the offices of members and party leaders. That is where the real work of legislating and oversight happens.”

On the first day of the new Congress, Rep. Marjorie Taylor Greene (R-GA) and Rep. Lauren Boebert (R-CO) got in a shouting match in the ladies’ room off the House floor when Greene walked out of a stall, saw her former friend and “confronted Boebert about taking money from McCarthy for her re-election and then turning against McCarthy when it came time to vote,” the Daily Beast reports.

When asked about the dustup, Boebert simply said: “See you later. Bye.”

Washington Post: “The tableau illustrated the slow remaking of Marjorie Taylor Greene — from an incendiary irritant of her own party’s leadership to a slightly-less-incendiary Republican team player, including opposing many of her usual hard-right allies this month by backing McCarthy as House speaker.”

“Greene’s evolution was part of a deliberate effort that began during her turbulent first term in Congress, in which she alienated both Democrats and Republicans by parroting conspiracy theories and making a series of offensive comments.”

Manhattan District Attorney Alvin Bragg told CNN that the investigations into the Trump Organization’s business practices are entering a new chapter and will “go as long as the facts and the law require,” even as he stressed that “a very important chapter” of the probe ended after the company was convicted and sentenced in a tax fraud scheme.

“Treasury Secretary Janet Yellen will meet with senior Chinese official Liu He this week as the two superpowers try to rekindle a relationship that accounts for much of the world’s economic activity but has grown tense over technology access, trade policy and Taiwan,” the Wall Street Journal reports.

“The pair will meet Wednesday in Zurich, where Ms. Yellen is stopping ahead of a multicountry tour through Africa that is aimed in part at countering China’s influence on the continent.”

“The Jan. 6 committee spent months gathering stunning new details on how social media companies failed to address the online extremism and calls for violence that preceded the Capitol riot,” the Washington Post reports.

“The evidence they collected was written up in a 122-page memo that was circulated among the committee… But in the end, committee leaders declined to delve into those topics in detail in their final report, reluctant to dig into the roots of domestic extremism taking hold in the Republican Party beyond former president Donald Trump and concerned about the risks of a public battle with powerful tech companies.”

“Congressional investigators found evidence that tech platforms — especially Twitter — failed to heed their own employees’ warnings about violent rhetoric on their platforms and bent their rules to avoid penalizing conservatives, particularly then-president Trump, out of fear of reprisals.”

During a visit to the Texas border city of El Paso, New York Mayor Eric Adams offered up a blistering criticism of the federal government’s response to the influx of immigrants into U.S. cities, the AP reports.

“I’m a fascist homophobe, but I’m a man of my word.”— Israeli Finance Minister Bezalel Smotrich, quoted by Haaretz.

“Tens of thousands of Israelis gathered in central Tel Aviv on Saturday night to protest plans by Prime Minister Benjamin Netanyahu’s new government to overhaul the legal system and weaken the Supreme Court — a step that critics say will destroy the country’s democratic system of checks and balances,” the AP reports.

Said Nelsen: “I’ve milked a few cows, spent most of my time walking behind lines of cows, so if you want some ideas on repro and the women’s health thing, I have some definite opinions.”

Nelsen later apologized and said he was “embarrassed” that he suggested his experience as a “lifelong dairy farmer” offered him insight into reproductive issues.

Politico: “Genuine or not, the stove flap gave Republican lawmakers an opening to put Biden’s energy policies back on the front burner, after last year’s spurt of high gasoline prices had faded from the headlines. It also touches on a real, coast-to-coast crusade by liberal city and state leaders to prohibit gas stoves and furnaces in new buildings, on the grounds that they endanger health and contribute to climate change.”

“But the White House has disavowed enacting any such ban at the federal level.”

“Iraqi Prime Minister Mohammed al-Sudani defended the presence of U.S. troops in his country and set no timetable for their withdrawal, signaling a less confrontational posture toward Washington early in his term than his Iran-backed political allies have taken,” the Wall Street Journal reports.

“Vietnamese President Nguyen Xuan Phuc resigned Tuesday, becoming the most senior member of the government to step down after a series of high-profile corruption scandals for which he was held responsible,” the AP reports.