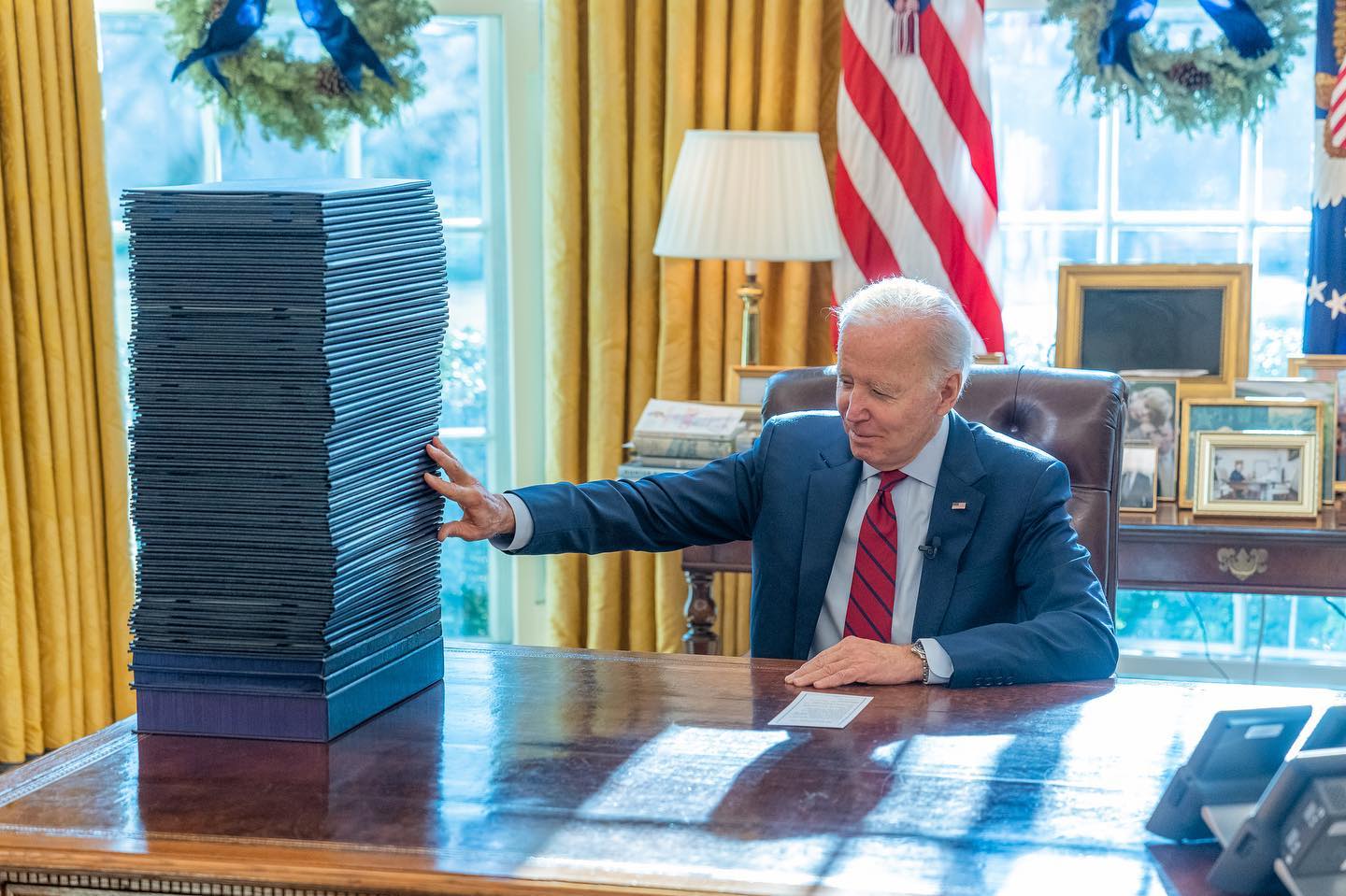 Associated Press: “The daunting political math confronting McCarthy remains the same: With a 222-seat majority, he can only lose a few detractors on any issue unless he reaches across the aisle for help and backing from Democrats for the 218 votes typically needed to pass legislation.”

“While the first bills the House Republicans easily approved were essentially GOP favorites, designed to unite their side of the aisle and even pull in some Democratic support, the next legislative lifts are expected to be more vigorous and politically risky.”

Washington Post: House rebels pushed to change Congress. Will they make it harder to get things done?

“The resolution, which passed the chamber 365-65, says the panel will be compromised of 16 members, nine Republicans and seven Democrats.”

“Former president Donald Trump’s family real estate business was ordered on Friday to pay a $1.6 million criminal penalty for its conviction on felony tax fraud and other charges, a stinging rebuke and the maximum possible punishment,” the New York Times reports.

“The sentence, handed down by a judge in State Supreme Court in Manhattan, caps a lengthy legal ordeal for Mr. Trump’s company, the Trump Organization, which was convicted in December of doling out off-the-books perks to some of its top executives. One of the executives who orchestrated the scheme, Allen Weisselberg, pleaded guilty and testified at the company’s trial. He was sentenced on Tuesday to serve five months at the notorious Rikers Island jail complex.”

“Keep the gas stove and get rid of the air fryer. Only urban elitist use air fryers.” — Rep. Ruben Gallego (D-AZ), on Twitter.

“You know we have an air fryer? Tells you who does the cooking.” — Sydney Gallego, his wife, responding on Twitter.

Rep. Ryan Zinke (R-MT) ranted on the House floor that the “deep state” is attacking the American cowboy and his way of life, the HuffPost reports.

Said Zinke: “There is no doubt the federal government deep state coordinates with liberal activists and uses politicians and willing media to carry their water… In many cases, they want to wipe out the American cowboy completely, remove public access to our lands and turn Montana into a national park.”

“According to a new book offering an inside look at President Joe Biden’s White House, Biden actively distrusts the Secret Service to the point that he does not speak freely in front of his agents and he believed that the agency lied about an incident where Biden’s German shepherd Major bit an agent,” Vox reports.

New York Times: “Democrats and historians see darker historical parallels. They liken the Republican zeal to pursue nebulous allegations of deep-state conspiracies to the ‘red scare’ days of a McCarthy from an earlier era.”

“Republicans reject such criticism and try to justify the panel by pointing to conservative causes célèbres… They say conservatives have been subjected to a double standard of justice, from former President Donald J. Trump on down, and they intend to prove it.”

“Kevin’s a piece of shit. And let’s just be honest about this, because he will say whatever he needs to say to stay in power. I’m not even saying that gratuitously to be mean to him. It’s just a fact.”— Former Rep. Adam Kinzinger (R-IL), talking to Charlie Sykes on his podcast, about Speaker Kevin McCarthy (R-CA).

“The White House on Thursday sharply criticized what it called a ‘backwards’ bill introduced by House Republicans that would limit presidential authority to tap the national Strategic Petroleum Reserve, which President Biden has done repeatedly in an effort to bring down gas prices,” Yahoo News reports.

“Known as the Strategic Production Response Act, the bill was introduced earlier this week by Rep. Cathy McMorris Rodgers (R-WA) to prevent the president from releasing any oil from the reserve (except in case of a carefully defined ‘severe energy supply interruption’) unless the president at the same time opens up more federal lands to oil and gas drilling — something Republicans have sharply criticized Biden for resisting.”

CBS News: “Hours after House Republicans approved a sweeping new select subcommittee promising an unprecedented review of misconduct or overreach by the federal government, a number of veteran House Democrats told CBS News they will participate in the panel.”

“They said the party will not boycott or stand down from the subcommittee, in contrast to how most House Republicans refused to take allotted seats on the landmark House Jan. 6 select committee.”

“Trump was acquitted in Senate trials following both impeachments, but the impeachments by the House remain part of the historical record and an indictment of the former president.”

“Speaker Kevin McCarthy opened the door on Thursday to releasing thousands of hours of security footage from the Jan. 6, 2021 attack on the Capitol — something law enforcement agencies have cautioned poses a significant security risk,” Politico reports.

Said McCarthy: “I think the American public should actually see all what happened instead of a report that’s written for a political basis.”

Speaker Kevin McCarthy told reporters that his party “will protect Social Security and Medicare, even as many in his party are itching to put changes to domestic spending programs on the table as part of negotiations about raising the nation’s debt limit,” Politico reports.

McCarthy also said he’d spoken with Presiden Biden and would like to sit down “early” to begin negotiations on spending and the debt limit.

“House Republicans are vowing to put Don Quixote to shame by tilting at a huge windmill: slashing federal spending by at least $130 billion without cutting defense,” Politico reports.

“It’s a proposition that’s severely unlikely on its face, before factoring in a Democratic Senate and White House that would never accept such cuts. Even the GOP’s fallback plan for avoiding a shutdown later this year — passing a short-term funding patch that would trigger reductions as an incentive for lawmakers to finish comprehensive spending bills — is inconceivable this term.”

“The Justice Department is seeking to question two people who searched Donald Trump’s properties in November, as federal investigators have asked whether the former president returned all classified documents to the federal government,” CNN reports.

“The development is the latest sign that the Justice Department is continuing to investigate, after telling a federal court last year it believed there was possible obstruction of justice related to Trump’s handling of classified materials.”

“When President Joe Biden sits down with Japanese Prime Minister Fumio Kishida on Friday, it will mark a major tete-a-tete that could have profound implications for U.S. policy toward a critical part of the globe,” Politico reports.

“It’s also an opportunity for Biden to underscore how his diplomatic efforts in the face of new geopolitical threats are bringing allies into closer alignment, and delivering in an area where Donald Trump’s sharp-elbowed approach largely failed to achieve results.”

“The federal budget deficit fell to $1.4 trillion for the 2022 calendar year, down from $2.6 trillion a year ago, as pandemic emergency spending slowed, the economy reopened and tax revenue rose,” the New York Times reports.

“While the annual gap between what the nation spends and what it takes in narrowed, the monthly deficit for December 2022 widened compared with a year ago, suggesting that the deficit will most likely grow again in the year to come.”

“The oil giant Exxon privately ‘predicted global warming correctly and skilfully’ only to then spend decades publicly rubbishing such science in order to protect its core business, new research has found,” The Guardian reports.

“A trove of internal documents and research papers has previously established that Exxon knew of the dangers of global heating from at least the 1970s, with other oil industry bodies knowing of the risk even earlier, from around the 1950s. They forcefully and successfully mobilized against the science to stymie any action to reduce fossil fuel use.”

“A new study, however, has made clear that Exxon’s scientists were uncannily accurate in their projections from the 1970s onwards, predicting an upward curve of global temperatures and carbon dioxide emissions that is close to matching what actually occurred as the world heated up at a pace not seen in millions of years.”