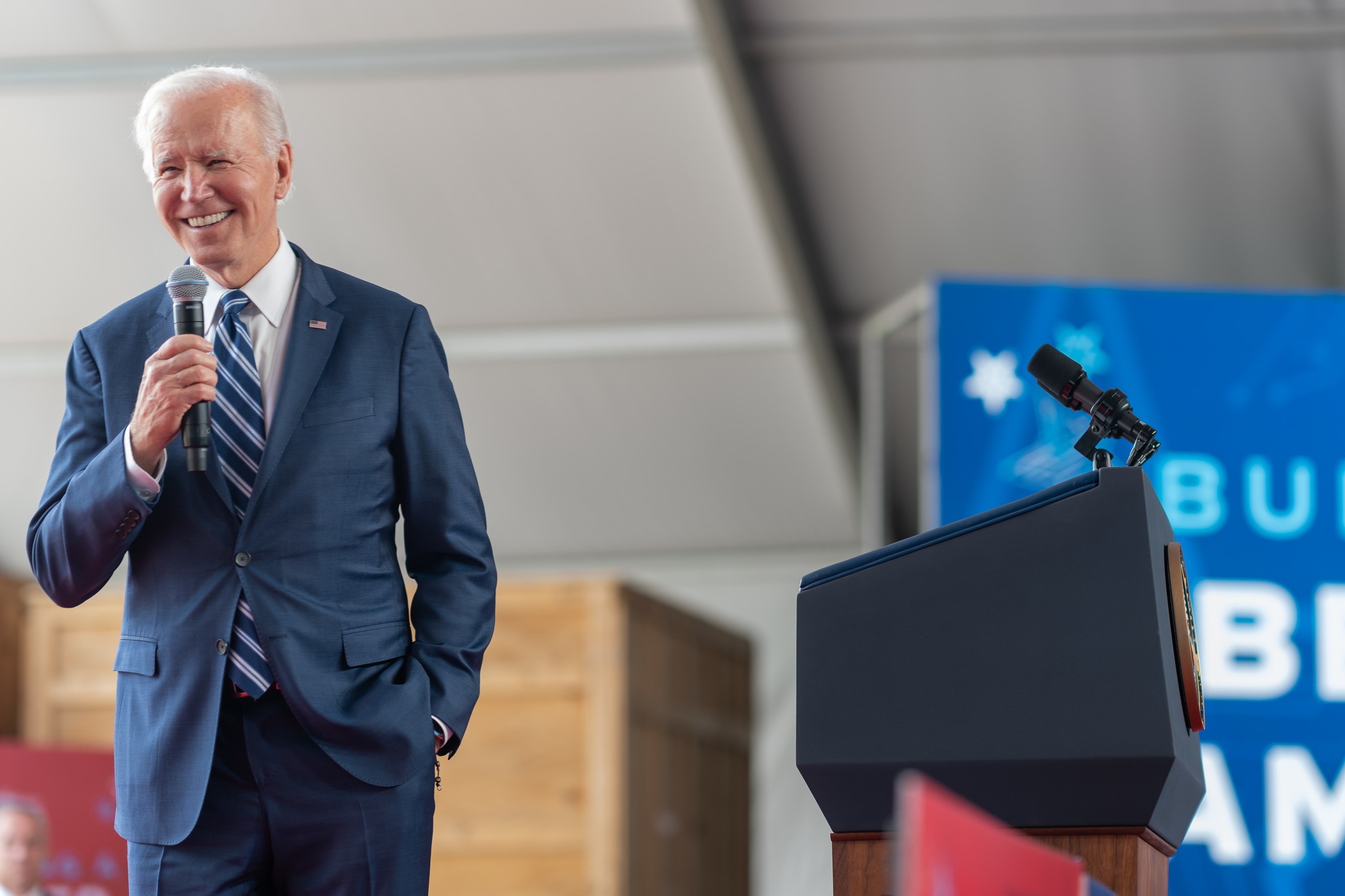 “Recent statewide elections in the state, coupled with a long list of strong potential Democratic candidates and the possible difficulty of getting strong Republicans through a primary, mean Democrats still keep an edge despite the opening.”

“Two years to the day after storming the U.S. Capitol, a former West Virginia state lawmaker who served prison time for his role in the riot said Friday that he hopes to return to the scene of his crime as an elected official,” the AP reports.

“Derrick Evans, who livestreamed himself on Facebook cheering on what he described as a ‘revolution’ at the Capitol on Jan. 6, 2021, announced he will run for a U.S. House seat in 2024.”

MICHIGAN U.S. SENATOR. Democratic Sen. Debbie Stabenow announced Thursday that she would not seek a fifth term in 2024 in Michigan, a move that sets off an open seat race in a state that swung from Trump to Biden. Stabenow, whose 2000 win made her the first, and to date only, woman to represent the Wolverine State in the upper chamber, hinted she wanted another woman to succeed her in her statement. “But I have always believed it’s not enough to be the ‘first’ unless there is a ‘second’ and a ‘third,” she said.

While Stabenow’s decision came as a surprise, it took very little time for news outlets to report that several politicians from each party were eying the contest. On the Democratic side, the New York Times relays that Rep. Elissa Slotkin, who represents the competitive 7th District, “called allies in the state on Thursday saying she was preparing to announce her candidacy for the Senate as soon as next week.” Multiple publications also say that fellow Rep. Haley Stevens is considering the idea.

Another congresswoman, Debbie Dingell, told the Times she wanted to wait to see whom she’d back or if she’d even jump in herself. While Dingell didn’t indicate how interested she was in campaigning to succeed Stabenow, though, Politico says that she’s indeed “seriously considering” the idea. An unnamed source also tells NBC that Lt. Gov. Garlin Gilchrist isn’t ruling out a campaign.

As for U.S. Secretary of Transportation Pete Buttigieg, who moved to Michigan last year, many media outlets concluded he was a “no” when he said early on Thursday that he was “fully focused on serving the president in my role as secretary of transportation and not seeking any other job.” But in an appearance on Fox News later in the day, when host Bret Baier repeatedly pressed Buttigieg on his intentions, the former South Bend, Indiana mayor declined to rule out a bid, twice saying he’s “completely focused” on his present job. He did add, “I’m not planning to run for anything,” but that’s very different from saying, “I’m not running for anything.”

Meanwhile, newly-elected Rep. Shri Thanedar says he has “no plans” to seek a promotion, which, again, may not be quite a no; a spokesperson for former Rep. Andy Levin, who lost last year’s primary to Stevens, said the same thing about his boss.

NBC and Politico have also named several other potential candidates as possibilities, though we’re still waiting to hear if any are thinking about it:

For the Republicans, there was also immediate talk that John James, who came close to beating Sen. Gary Peters in 2020 two years after falling short against Stabenow, could wage a third bid for the Senate. James, who won an unexpectedly tight House race last year, didn’t dismiss the idea, saying, “Look, I haven’t even been sworn into Congress, yet! So here’s my plan: Get sworn in and get to work serving the people of Michigan’s 10th district.” Former Rep. Peter Meijer, who will not be getting sworn in, responded with a mere, “No comment” when asked about his interest.

Another possibility is Macomb County Public Works Commissioner Candice Miller, a former congresswoman who disappointed Republicans by turning down the chance to run for governor last cycle. Miller’s former chief of staff, though, says she is “seriously considering” a Senate bid.

There are also several people who did run for governor last time who could get in. A spokesperson for Tudor Dixon, who lost to Whitmer 54-44 last year after a disastrous campaign, tells the AP she isn’t ruling out a Senate bid. The Times, meanwhile, says that wealthy businessman Kevin Rinke, whom plenty of Republicans probably wish had beaten Dixon in last year’s primary, is telling allies he’s interested.

We could also see the return of real estate agent Ryan Kelley, who was arrested in June on misdemeanor charges related to his role in the Jan. 6 riot as he was running for governor. Kelley, who responded to his fourth-place primary showing by making evidence-free allegations against the state party and Dixon, said last year he was thinking about campaigning against Stabenow.

PENNSYLVANIA U.S. SENATOR. Democratic Sen. Bob Casey announced Thursday that he would undergo treatment for prostate cancer, saying, “While the news came as a shock, I can report that I have an excellent prognosis, as well as the benefit of exceptional medical care and the unwavering support of my family.” Casey, who is up for re-election in 2024, added, “In the coming months I will undergo surgery, after which I am expected to make a full recovery.”

LOUISIANA GOVERNOR. News broke Wednesday that an unreleased poll included state Democratic Party chair Katie Bernhardt, who had not previously been mentioned as a possible contender, as an option, and she didn’t rule out anything when reporters asked her about it. Bernhardt instead put out a statement saying, “It’s flattering to be included as a potential candidate but my primary objective is to utilize all the information available to ensure we run the best candidate.”

ARIZONA U.S. SENATOR. While an unnamed Kari Lake ally told NBC last month that the 2022 Republican nominee for governor wanted Pinal County Sheriff Mark Lamb to run for Senate and that she was “pretty disillusioned right now,” Politico’s Holly Otterbein reported Thursday that Lake had “recently fielded calls from supporters encouraging her to run” against independent incumbent Kyrsten Sinema. There’s no word what Lake is telling these callers in private, but in public she’s continuing to spread conspiracy theories about her loss to now-Gov. Katie Hobbs and dubbing herself “the duly elected governor.”

Otterbein also mentions two other Republicans, state Treasurer Kimberly Yee and former Rep. Matt Salmon, as possible Senate contenders, though neither has shown any interest. Both Republicans ran abortive campaigns last cycle for governor: Yee turned around and won re-election 56-44, while Salmon dropped out and endorsed Karrin Taylor Robson in a failed attempt to block Lake.

On the Democratic side, Otterbein lists Tucson Mayor Regina Romero, who is up for re-election this year, as a possibility, but there’s also no indication she’s considering. Rep. Ruben Gallego, for his part, is continuing to staff up for a likely Senate campaign, while colleague Greg Stanton has also expressed interest.

MISSISSIPPI GOVERNOR. The Daily Journal reported before Christmas that Secretary of State Michael Watson is indeed considering taking on Gov. Tate Reeves in this August’s Republican primary. Watson and other potential contenders have until the Feb. 1 filing deadline to make up their minds, but there’s one name we can already cross off. While former state Rep. Robert Foster, who took third in 2019, reportedly was thinking about another campaign over the summer, he announced last week that he’d instead run for a seat on the DeSoto County Board of Supervisors.

NORTH CAROLINA GOVERNOR. The conservative Washington Examiner relayed in mid-December that former Rep. Mark Walker is considering seeking the Republican nomination for governor or to return to the House after his party crafts a new gerrymander. Walker last cycle campaigned for the Senate even though Donald Trump tried to persuade him to drop down and run for the lower chamber, but he earned just 9% of the primary vote for his stubbornness.

MARYLAND 8TH DISTRICT. Democratic Rep. Jamie Raskin said last week that he’d “been diagnosed with Diffuse Large B Cell Lymphoma, which is a serious but curable form of cancer.” Raskin added that he was “about to embark on a course of chemo-immunotherapy on an outpatient basis,” and that “[p]rognosis for most people in my situation is excellent after four months of treatment.” The congressman also said he planned to keep working during this time, and he was present Tuesday for the opening of the 118th Congress.

WASHINGTON 3RD DISTRICT. Democrats will still have election conspiracy theorist Joe Kent to kick around this cycle, as the 2022 GOP nominee declared before Christmas, “I’m running again in 2024.”

ARIZONA ATTORNEY GENERAL. Democrat Kris Mayes’ narrow win over election denier Abe Hamadeh was affirmed after a recount concluded last week, and Mayes was sworn in as attorney general on Monday. The Democrat’s margin dropped from 511 to 280 votes; most of this difference came from dark red Pinal County, which said it had initially failed to count over 500 ballots because of “human error.” Hamadeh characteristically refused to accept his defeat and announced Tuesday he was “filing a ‘Motion for New Trial.'”

DCCC: House Democratic leader Hakeem Jeffries announced ahead of Christmas that the new DCCC chair would be Rep. Suzan DelBene, who represents a Washington seat that Joe Biden carried 64-33. Jeffries’ decision came weeks after House Democrats voted 166-38 to give the caucus’ leader the opportunity to select the head of the DCCC rather than have the chair be elected by the full body. The new rule still requires members approve the choice, and they ratified DelBene two days after she was picked.

A panel of federal judges rules that South Carolina lawmaker drew the 1st Congressional District held by Rep. Nancy Mace (R-SC) “in such a way that it discriminates against Black voters and must be recrafted by the end of March,” the Charleston Post & Courier reports.

“Mace’s hold on the office is not immediately affected by the decision issued Jan. 6 but it likely means a much different congressional map will be in place in 2024.”