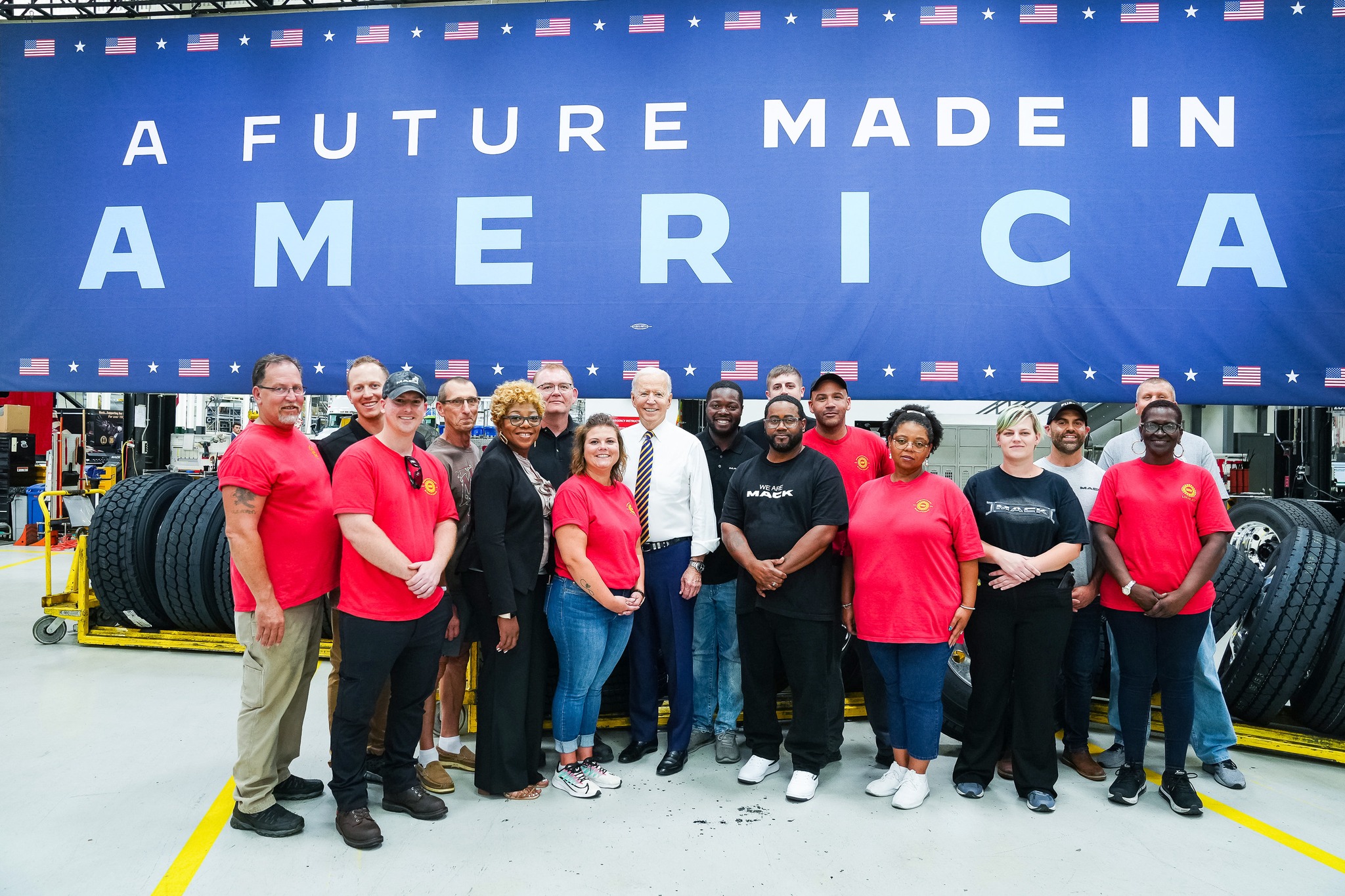 Sen. Debbie Stabenow (D-MI), the first woman elected to the Senate from Michigan, told the Detroit News that she won’t seek reelection and will retire when her fourth term ends in 2025.

Sen. Debbie Stabenow’s (D-MI) “decision to not run for reelection jolted national Democrats on Thursday, setting off a mad scramble for a newly open battleground seat in 2024,” Politico reports.

“At least two prominent Democrats — Reps. Elissa Slotkin and Debbie Dingell — are seriously considering a run, according to people familiar with their thinking. But several other House members could also take a look at it, including Reps. Dan Kildee and Haley Stevens.”

Politico: “On Thursday, the five new early states — South Carolina, New Hampshire, Nevada, Michigan and Georgia — must submit updates to the DNC about their progress in changing their primary dates or updating voting laws to comply with DNC requirements.”

“It’s the next step in a lengthy effort to redistribute the outsized power that voters in some states have in presidential nominating fights, giving voters of color a bigger voice in the Democratic Party’s process.”

2024. New Hampshire Gov. Chris Sununu (R) told Fox News that he’s having conversations about a bid for the White House.

Said Sununu: “It’s incredibly flattering. A lot of folks are coming to me, a lot of folks want me to run. It’s definitely conversations that we’re having, of course.”

“Pennsylvania’s incoming Democratic governor, Josh Shapiro, announced Thursday that he is tapping a Republican who stood up to Donald Trump after the 2020 election to be the state’s top elections official,” NBC News reports.

“As the vice chair of Philadelphia’s Board of Elections, Al Schmidt was at the center of defending the 2020 vote in Pennsylvania, a key presidential battleground that narrowly went to President Joe Biden.”

KENTUCKY GOVERNOR. Campaign finance reports are in for the final quarter of 2022, and they show Democratic Gov. Andy Beshear taking in $647,000 and ending the year with $4.7 million on hand. The numbers for the Republicans facing off in the May primary are below:

The candidate filing deadline is Friday, and Bluegrass State politicos are waiting to see if former Gov. Matt Bevin or any other big names jump in. However, while there’s been some speculation that Papa John’s founder John Schnatter could wage a late campaign, the Kentucky Lantern notes he’s donated $2,000 to Craft.

Craft, for her part, has relatively little available because she spent $1 million during her opening quarter, which is far more than any of her intra-party rivals. The former ambassador hasn’t done any significant self-funding yet, though she very much has the money available if she chooses to refill her war chest this way. Indeed, Craft and her husband, coal billionaire Joe Craft, last summer joined another wealthy CEO and co-purchased the Kentucky State Fair’s grand prize country ham for a record $5 million.

Deters, finally, said last year he’d self-fund more than $1 million, though the suspended attorney has only thrown down $70,000 so far. Deters announced in June he was bolting the GOP to run as an independent, but he appears to have rejoined the Republican Party sometime before October, when he was charged with menacing behavior towards his nephew.

PHILADELPHIA MAYOR. The Philadelphia Inquirer’s Anna Orso reports that former Mayor Michael Nutter, who served from 2008 to 2016, has told allies he’ll consider launching a late bid for his old post, but that he hasn’t made any moves to prepare for a May Democratic primary campaign. Nutter himself declined to say anything when Orso asked him for comment: The filing deadline is in March.

Nine notable Democrats are currently facing off to succeed termed-out incumbent Jim Kenney, and they have one big advantage that any new arrivals wouldn’t get: Campaign donation limits reset at the start of each calendar year, so newcomers have missed out on the chance to take in contributions in 2022. Still, Orso notes that Nutter waited until February of 2007 before launching his successful first campaign, and he has more name recognition now than he did 16 years ago.

Anyone who does make the ballot also learned this week that they’ll be able to bring in more money because one contender, former City Councilman Allan Domb, self-funded $250,000 on Dec. 30, which was the amount needed to trigger the city’s “millionaire’s amendment.” As fellow Inquirer reporter Sean Collins Walsh explains, candidates may now raise $6,200 from individuals and $25,200 from PACs or corporations, which are both double the usual limits. He also writes that observers correctly anticipated that Domb would wait until the very end of the year in order to make sure that his opponents couldn’t take advantage of the new limits in 2022.

Domb, though, is far from the biggest spender so far. That honor goes to For A Better Philadelphia PAC, which AdImpact says has spent or booked $680,000 in advertising to promote businessman Jeff Brown. Brown, who is the only candidate in the race who hasn’t held elected office, himself has outspent Domb’s campaign $300,000 to $160,000.

LOUISIANA GOVERNOR. Republican Sen. John Kennedy announced Wednesday evening that he wouldn’t compete in this year’s contest to succeed termed-out Democratic incumbent John Bel Edwards as governor of Louisiana, a development that answers perhaps the biggest question hovering over this race. While Kennedy has constantly flirted with seeking the top job starting in 2003, when he waged an abortive run back when he was still a Democrat, he emailed supporters, “I have looked into my heart and decided to remain in the Senate and not to run for governor.”

The only two candidates who are currently competing in the October all-party primary are Republican Attorney General Jeff Landry and independent attorney Hunter Lundy, but Kennedy’s declaration means that it’s all but certain that two other statewide Republicans will announce very soon. Indeed, Lt. Gov. Billy Nungesser made it clear last month he planned to take on Landry if the senator wouldn’t, saying, “If he doesn’t, I have to run. Jeff is not a good person.”

State Treasurer John Schroder also said recently that if Kennedy stayed out, “I plan to announce and pursue the title of Governor in 2023.” Nungesser’s kickoff is set to coincide with his birthday on Tuesday, while Schroder’s is scheduled for two days later. Other Pelican State politicians may also say more about their plans now that they know they won’t need to go up against Kennedy.

Nungesser earlier on Wednesday also released an internal from Greg Rigamer, a longtime Louisiana consultant who has worked for both parties, that showed him doing well in a contest that did not include Kennedy. The numbers from BDPC find Nungesser deadlocked 23-23 with Democrat Shawn Wilson, who serves as the state’s secretary of transportation, with Landry just behind with 22%. The survey also finds Republican state Sen. Sharon Hewitt far back in fourth with 3% while Lundy and Schroder grab 2% each. Neither Wilson nor Hewitt are currently running, though the Democrat formed an exploratory committee last month.

VIRGINIA 4TH DISTRICT. Jennifer McClellan beat her fellow state senator, conservative Joe Morrissey, in an 85-14 landslide to win the Democratic nomination in the Dec. 19 firehouse primary to succeed the late Rep. Donald McEachin. McClellan should have no trouble defeating Republican nominee Leon Benjamin, who badly lost to McEachin in 2020 and 2022, in the Feb. 21 special election for this 67-32 Biden seat; McClellan’s win would make her the first Black woman to represent Virginia in Congress.

Conspiracy theorist Mike Lindell said he is going to Florida to audit Gov. Ron DeSantis’ (R) re-election victory because there is no way he could have won that big a margin.

INDIANA U.S. SENATOR and GOVERNOR. Bellwether Research released mid-December numbers before Christmas for the 2024 GOP primaries for the Senate and governor: The firm previously worked for former Gov. Mitch Daniels, who is a prospective Senate candidate, but a Daniels consultant tells Politico’s Adam Wren that this survey was done without his knowledge.

The firm tested out hypothetical Senate scenarios with and without Daniels, who just completed his tenure as president of Purdue University. We’ll start with the former matchup:

In the Daniels-free scenario, Rokita leads Banks 16-14 as Spartz and Hollingsworth grab 12% and 11%, respectively.

Spartz herself quickly publicized her own numbers from Response:AI that put Daniels in front with 35% as she and Banks deadlocked 14-14 for second. That survey placed Hollingsworth at 6% while two people who were not tested by Bellwether, 2022 House nominee Jennifer-Ruth Green and disgraced former Attorney General Curtis Hill, took 4% and 2%. Wren recently named Hill, whom we hadn’t heard mentioned for Senate, as a possible candidate, though there’s been no sign yet that he’s thinking about campaigning.

None of the other Republicans tested in either poll are currently running for the Senate either, and Daniels’ ultimate decision may deter some of them from getting in. Indeed, an unnamed person close to Spartz told Politico that she may decide not to go up against the former governor: The congresswoman, writes Wren, “declined to comment on that question, but told POLITICO she is seeking a meeting with Daniels before making her decision.”

A Banks ally, though, insists his man “won’t make his decision based on what others do and I think the poll numbers released by Daniels and Spartz will only embolden him to run.”