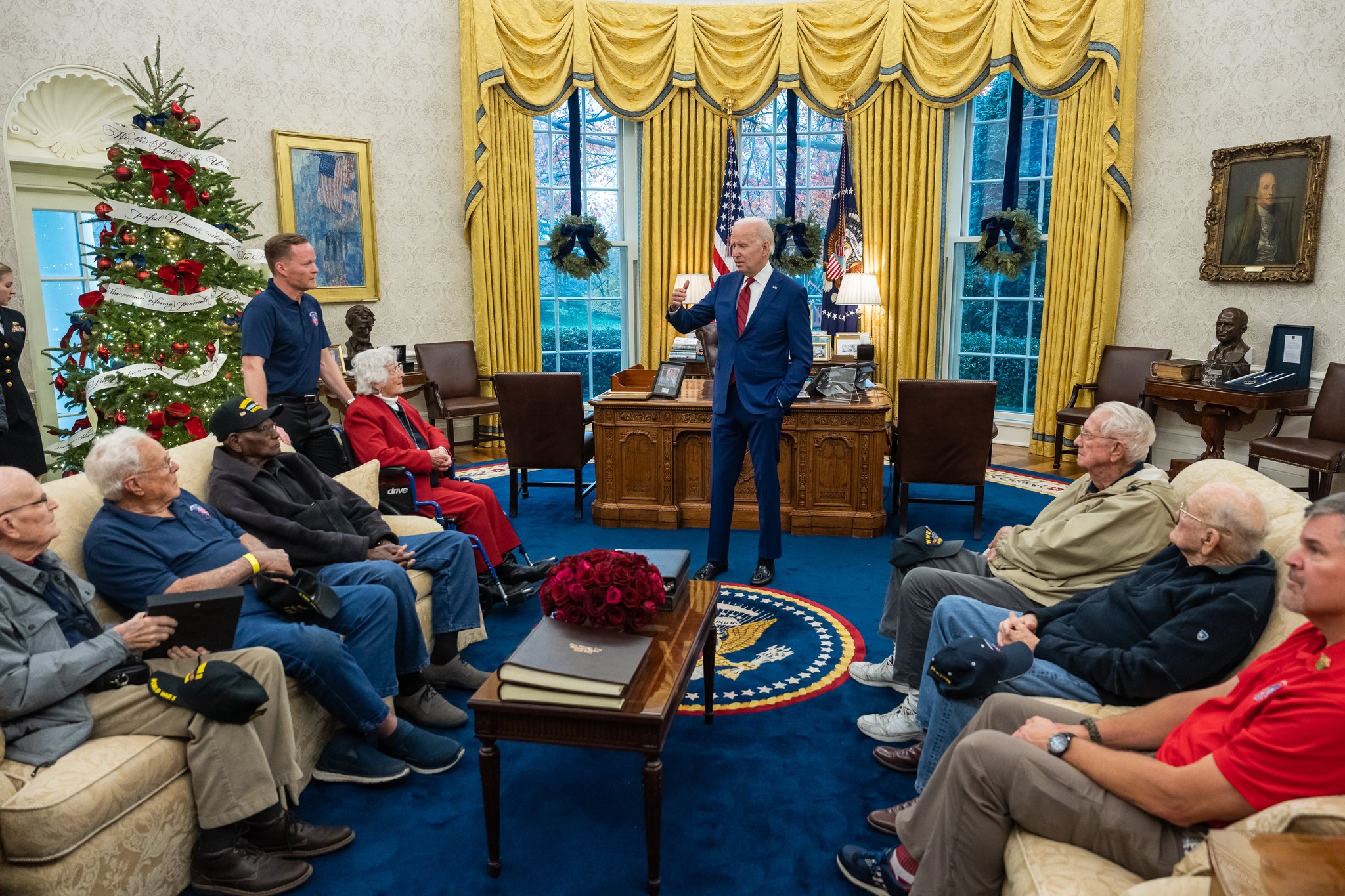 President Joe Biden on Twitter: “There is a certain stillness at the center of the Christmas story: a silent night when all the world goes quiet. And all the clamor, everything that divides us, fades away in the stillness of a winter’s evening. I wish you that peace this Christmas Eve.”

Donald Trump on Truth Social: “Merry Christmas to EVERYONE, including the Radical Left Marxists that are trying to destroy our Country, the Federal Bureau of Investigation that is illegally coercing & paying Social and LameStream Media to push for a mentally disabled Democrat over the Brilliant, Clairvoyant, and USA LOVING Donald J. Trump, and, of course, The Department of Injustice, which appointed a Special ‘Prosecutor’ who, together with his wife and family, HATES ‘Trump’ more than any other person on earth. LOVE TO ALL!”

While a Washington mired in sub-freezing temperatures will see very little public political action in the final week of 2022, things are going on behind the scenes.

The vote for the next House speaker will come on the third day of the new year, and Kevin McCarthy will spend the days between now and then making his list of key undecideds and checking it twice — and thinking about how to persuade some of the naughties to play nice.

And as they undeck the halls and munch through Christmas leftovers, a long list of potential 2024 presidential candidates will talk it over with their families — or at least pretend to debate decisions they have already privately made. Among those who have said they will use the holiday break to consider candidacies or to solidify early moves: Ron DeSantis, Nikki Haley, Larry Hogan, Asa Hutchinson, Kristi Noem, Mike Pence, Mike Pompeo, Tim Scott, Chris Sununu, and Glenn Youngkin.

“A state judge on Saturday rejected Kari Lake’s last-ditch effort to overturn her defeat in the Arizona governor’s race, dismissing for lack of evidence her last two claims of misconduct by Maricopa County election officials,” the New York Times reports.

“The order by Superior Court Judge Peter Thompson, after a two-day trial in Phoenix that ended Thursday, follows more than six weeks of claims by Ms. Lake, a Republican, that she was robbed of victory last month — assertions that echoed the false contention that was at the heart of her campaign: that an even larger theft had stolen the 2020 presidential election from Donald Trump.”

“Ms. Lake and her supporters conjured up what they called a deliberate effort by election officials in Maricopa County, the state’s largest county, to disenfranchise her voters. But they never provided evidence of such intentional malfeasance, nor even evidence that any voters had been disenfranchised.”

Washington Post: “The outcome marked the culmination of a two-year session of Congress that saw lawmakers hurtling from deadline to deadline, sometimes threatening to push the economy to the brink. While some Republicans this week backed the spending measure in the Senate, nearly all of them rejected it in the House — foreshadowing the perilous fights to come once the party assumes control of that chamber next year.”

“Congress on Friday gave final passage to legislation changing the arcane law that governs the certification of a presidential contest, the strongest effort yet to avoid a repeat of Donald Trump’s violence-inflaming push to reverse his loss in the 2020 election,” the AP reports.

“The House passed an overhaul of the Electoral Count Act as part of its massive, end-of-the-year spending bill, after the Senate approved identical wording Thursday. The legislation now goes to President Joe Biden for his signature.”

“The provisions amending the 1887 law — which has long been criticized as poorly and confusingly written — won bipartisan support and would make it harder for future presidential losers to prevent the ascension of their foes, as Trump tried to do on Jan. 6, 2021.”

Donald Trump issued a video response to the Daily Caller on the release of the Jan. 6 report, claiming the committee investigating the riot omitted evidence, made false statements and “did not produce a single shred of evidence” that he “intended” violence on the Capitol.

He added: “They want to stop us from taking back our country, but they will fail, they will not win.”

Good said the “Never Kevin” members will back Rep. Andy Biggs (R-AZ) “on the first ballot to prove McCarthy can’t get the gavel.”

“But once the second ballot is called, they’ll begin coalescing around another, unnamed candidate—a GOP lawmaker most have already agreed upon, Good said, but will not name for fear of hurting this person’s candidacy.”

Good added that this alternative candidate “cannot be part of, and they are not part of, the effort to block McCarthy.”

That sure sounds like the mystery candidate is Rep. Steve Scalise (R-LA).

Rep. Bob Good (R-VA) told Politico that Rep. Kevin McCarthy (R-CA) “is not a conservative” and speculated that he delayed organizing decisions until January because he’s promised “multiple people the same thing.”

The GOP leader is expected to push back against the package today using his “magic minute” of unlimited speaking time.

New York Times: “Where Mr. Santos currently lives remains unclear, in part because he has offered conflicting accounts… Mr. Santos had also told Newsday that he would eventually move to Oyster Bay, N.Y. Instead, he appears to have settled in a house in Huntington, a town just outside his district’s boundaries.”

“Members of Congress are only required to live in the state they represent, not the district.”

The Bulwark: George Santos’s problems are just getting started.

“The Federal Reserve’s preferred inflation measure is showing signs of moderating after months of rapid price increases, and a closely watched gauge of consumer spending slowed last month, a sign that the economy may have less steam as it heads into 2023,” the New York Times reports.

Donald Trump defended his dinner with Kanye West in a New York magazine interview saying that he is “overly generous.”

He added: “I believe I am overly generous, and I don’t think that’s a bad thing. But sometimes it can make life a little bit more difficult.”

“House Minority Leader Kevin McCarthy used his last speech on the House floor this year to pitch himself to his colleagues as a hard-line spending hawk who will confront Democrats in the new Congress, as he tries to firm up support in his run for speaker,” the Wall Street Journal reports.

Said McCarthy: “This is a monstrosity and one of the most shameful acts I’ve ever seen in this body.”

Insider closely examines the killings of 175 transgender people over the last five years:  Insider has compiled the most comprehensive account to date of the rising homicidal violence targeting transgender people, systematically filing hundreds of public-records requests and sending reporters around the US to gather information on five years of homicides targeting transgender and gender nonconforming, nonbinary, and two-spirit people across the United States and Puerto Rico from 2017 through 2021.