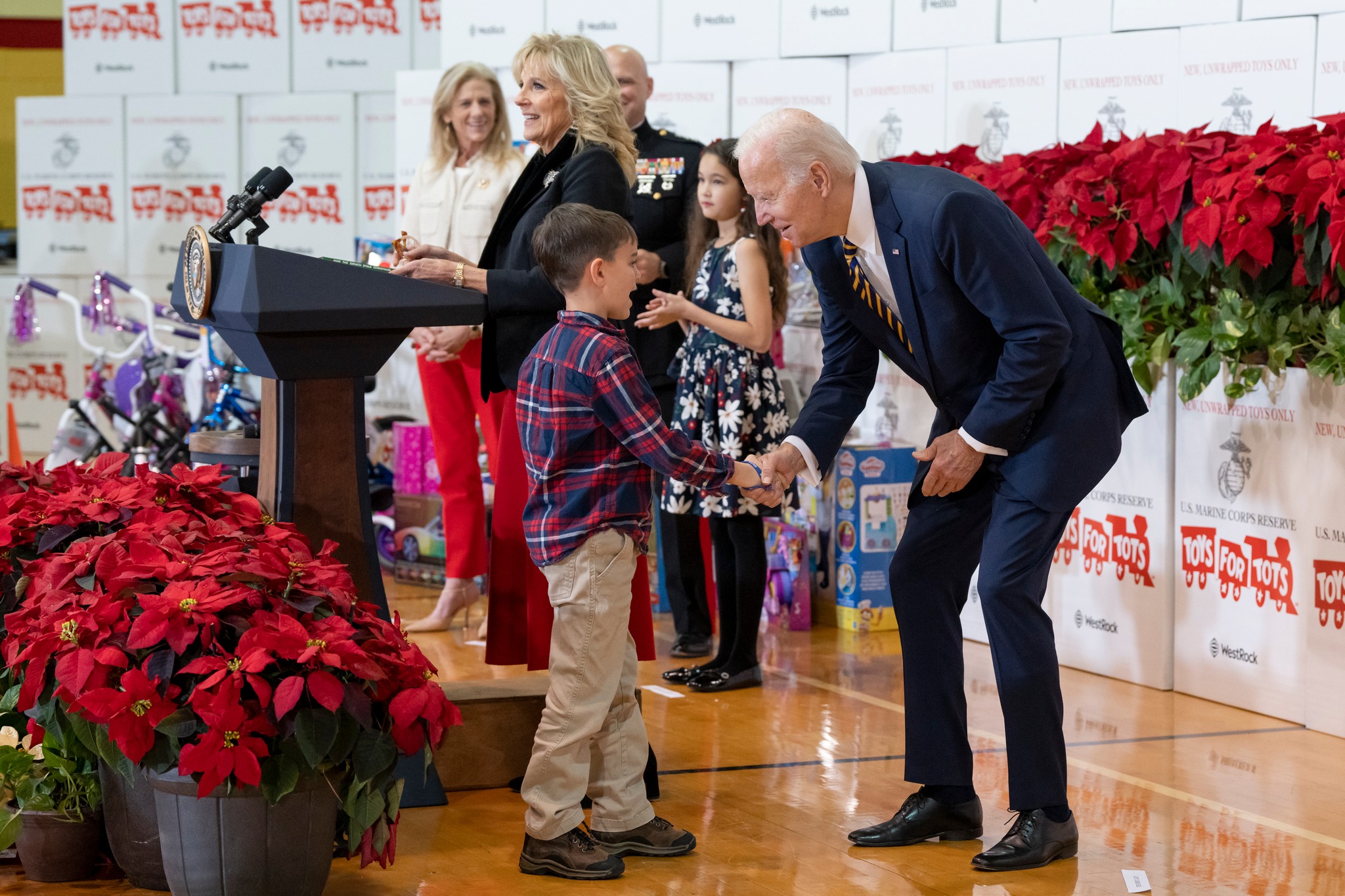 Democratic pollster Jefrey Pollock does a good job showing how Democrats turned the midterms from a referendum into a choice.

A combination of flawed candidates endorsed by Donald Trump along with the Supreme Court’s decision to overturn Roe v. Wade — coupled with strong Democratic incumbents running on their record of passing historic legislation — allowed voters to ignore any misgivings they might have had about the party in power.

The entire presentation is worth a look.

Larry Sabato’s Crystal Ball gives us an early look at the 2024 electoral map:

“Senate Majority Leader Chuck Schumer, beaming with confidence after having proved his doubters wrong and expanded his majority in the midterm elections, vowed without hesitation that the Democratic Party will keep control again in two years,” NBC News reports.

“Joe Biden beat Donald Trump once, and Democrats are crafting a strategy to try to beat him again in 2024 — even if his name isn’t on the ballot,” NBC News reports.

“Anticipating that Trump may fade, Biden allies hope to persuade voters that the choice is the same and that any Republican successor would have to embrace enough of his policies to be a virtual clone of Trump himself.”

“Key to that approach is spotlighting Trump’s policies and worldview and forcing other GOP candidates to take positions on whether they agree with Trump or not.”

Speaker Nancy Pelosi and Senate Majority Leader Chuck Schumer both said President Joe Biden should run for a second term in 2024 after what they described as an “excellent” first two years in office, CNN reports.

“First lady Jill Biden, despite being so worn out from a recent circuit of White House events that she lost her voice, is now seriously looking ahead to her husband running for reelection in 2024,” CNN reports.

“That’s a tidal shift from her position just three months ago.”

“Just weeks after touting a new super PAC to help Republican candidates in the November midterms, Donald Trump wound up spending just a fraction of the $100 million he had available ― and hoarded the rest for his own 2024 presidential run,” the HuffPost reports.

Interestingly, “not a dime spent helping Herschel Walker in Georgia for his Dec. 6 runoff.”

Wall Street Journal: “Rather than staging signature, large-scale rallies, the plan calls for Mr. Trump to tour key states and conduct smaller policy events, focusing on crime, border security, foreign policy, big tech and the economy… Rallies would resume later in the year; advisers said it was never the plan to do such events early on.”

“The goal of the policy events, these people said, is to remind voters of the ideas Mr. Trump advanced during his time in office, which remain popular among Republicans even if his personal style isn’t.”

Peter Thiel has made his first public comments on this year’s U.S. midterms, declaring the results “a depressing disaster” after plowing more than $30 million into Republican races, the Financial Times reports.

Said Thiel: “If you can’t sort of win in that kind of a context, how are you ever going to win?”

“If we don’t do something different, we’re just going to be in this Groundhog Day where something like this is going to repeat in 2024 and for the rest of this decade.”— Peter Thiel, in an interview with Puck, on the GOP’s failure in the 2022 midterm elections.

Arizona U.S. Senator. Sen. Kyrsten Sinema (I-AZ) “has taken the formal step of filing paperwork as an independent candidate for 2024, even though she hasn’t publicly said if she will seek reelection,” the Wall Street Journal reports.

“Filing a statement of candidacy doesn’t bind Ms. Sinema to a run, but it does allow her to raise money.”

Cook Political Report: “Sinema’s change in alignment comes just as the 2024 Senate map — already brutal for Democrats — is coming into focus. She was already going to face a bruising primary where she was the underdog to win re-nomination, given how many times she’s infuriated her now-former caucus and the more liberal wing of the party, many of whom helped her in 2018 turn Arizona’s Senate seat blue for the first time in more than 40 years.”

“However, her odds for re-election were already bleak, with Rep. Ruben Gallego vocally exploring a primary challenge where he would have been the favorite over the incumbent. And now the prospect of running as an independent gives her an equally hard path to victory. Polls have shown her underwater across party identification.”

North Carolina 11th District. Defeated Rep. Madison Cawthorn is ending his short congressional career in true Madison Cawthorn fashion by getting sued by his own attorneys for failing to pay $193,000. The Bopp Law Firm represented the Republican as he defended himself from a lawsuit that argued his support for the Jan. 6 rioters made him ineligible to hold office under the U.S. Constitution.

While Bagby didn’t mention Morrissey by name as he explained his decision to leave the contest to succeed the late Rep. Donald McEachin in this safely blue seat, he said he “want[s] to be an example that sometimes you have to sacrifice for the greater good.” Morrissey, meanwhile, once again threw around evidence-free allegations insinuating that Democratic leaders were trying to get McClellan nominated and pledged to continue on to Tuesday.

Several other prominent Democrats followed Bagby’s lead and quickly consolidated behind McClellan. Richmond Mayor Levar Stoney, who was arguably Bagby’s most prominent ally, endorsed McClellan right after Bagby dropped out, while four previously neutral figures, Sen. Mark Warner and Reps. Abigail Spanberger, Elaine Luria, and Bobby Scott, did so later in the day. McClellan had already earned the backing of Sen. Tim Kaine and Northern Virginia Reps. Don Beyer, Jennifer Wexton, and Gerry Connolly earlier in the week, giving her the support of every Democrat in the state’s congressional delegation, while EMILY’s List endorsed McClellan shortly before Bagby did.

Morrissey, for his part, is counting on a very different base of support to carry him to the Democratic nomination. The state senator is running a radio ad starring conservative radio host John Fredericks, a Big Lie spreader who owns the radio network where Morrissey has his own show. Fredericks, unsurprisingly, tells Republican listeners to cast a ballot in the Democratic nomination contest for the “pro-life” and “fiscal conservative” Morrissey. Not all Republicans are so high on Morrissey, though: State Senate Minority Leader Tommy Norment told the Richmond Times-Dispatch, “He is a disgrace as a ‘public servant.’”

The Democratic field also includes former Del. Joseph Preston and insurance business owner Tavorise Marks. Further contenders could still get in ahead of Friday’s noon filing deadline, though any prospective candidates would need to submit signatures from 150 registered voters. One person who will not be running, though, is retiring Petersburg City Councilor Treska Wilson-Smith, who just said no to a bid.

Arizona 2nd District. Outgoing Navajo Nation President Jonathan Nez, who lost re-election last month to opponent Buu Nygren 53-47, is not ruling out seeking the Democratic nomination to go up against Republican Rep.-elect Eli Crane, though Nez acknowledged a bid would be tough. “Of course, you keep your options open, you never say no to anything,” he told Source NM before adding, “I hate to say it, but it’s going to be very difficult for any Democrat to run for that position.”

Nevada 1st District. Republican Mark Robertson, who lost to Democratic Rep. Dina Titus 52-46 last month, has filed paperwork with the FEC to raise money for a potential rematch. Robertson does not appear to have said anything publicly yet about his 2024 plans.

California 37th District. Democratic Rep. Karen Bass has resigned from the House in order to become mayor of Los Angeles, a post she assumed when her term began Monday. Bass will be succeeded in Congress in January by Sydney Kamlager, a fellow Democrat who was elected last month with the new mayor’s support.

Pennsylvania State House. Bryan Cutler, the leader of Pennsylvania’s House Republicans, announced Thursday that he was purportedly scheduling the special elections for two vacant Democratic-held state House seats, the 34th and 35th Districts, for May 16, a move that comes a week after Democratic Leader Joanna McClinton set them for Feb. 7. McClinton argues she has the authority to do this because her party won 102 of the 203 seats on Nov. 8, while Cutler says he’s in charge because the GOP will have more members when the new legislature meets Jan. 3 because of those vacancies.

A third seat, the 32nd District, is also vacant, but the dueling leaders both said it should be filled on Feb. 7; however, they each dispute that the other has the authority to actually schedule the contest. Both the Department of State (which is run by an appointee of Democratic Gov. Tom Wolf) and election officials in Allegheny County—where all three seats are located—have scheduled all three races for Feb. 7.

Republicans filed a lawsuit last week seeking to block McClinton’s chosen dates, and the verdict could have serious consequences even if Democrats end up holding all three of these constituencies. The New York Times’ Campbell Robertson writes that Democrats are afraid that if the GOP gets control of the speakership next month, they’d rewrite the rules to keep it even if Democrats prevail in all three special elections; Cutler, in the words of Robertson, insisted that “such speculation was premature,” which is anything but a denial of his intentions.

And as pointed out by Pennsylvania election law attorney Adam Bonin, who works with state Democrats, a Republican House would have the chance to place an anti-abortion constitutional amendment before voters during the May 2023 primary. This measure would amend the state’s governing document to say, “This constitution does not grant the right to taxpayer-funded abortion or any other right relating to abortion.”

The GOP is also looking to advance other amendments to require voter ID and to enhance the legislature’s power. State law requires both chambers to pass a proposed amendment during two successive sessions of the legislature with an election in between before it can get on the ballot. The GOP already began the process with a vote in favor of these amendments following the 2020 elections, but if the state House can’t pass them a second time, Republicans (who currently run the state Senate) would need to wait until they hold both chambers again before starting the process once more from scratch.