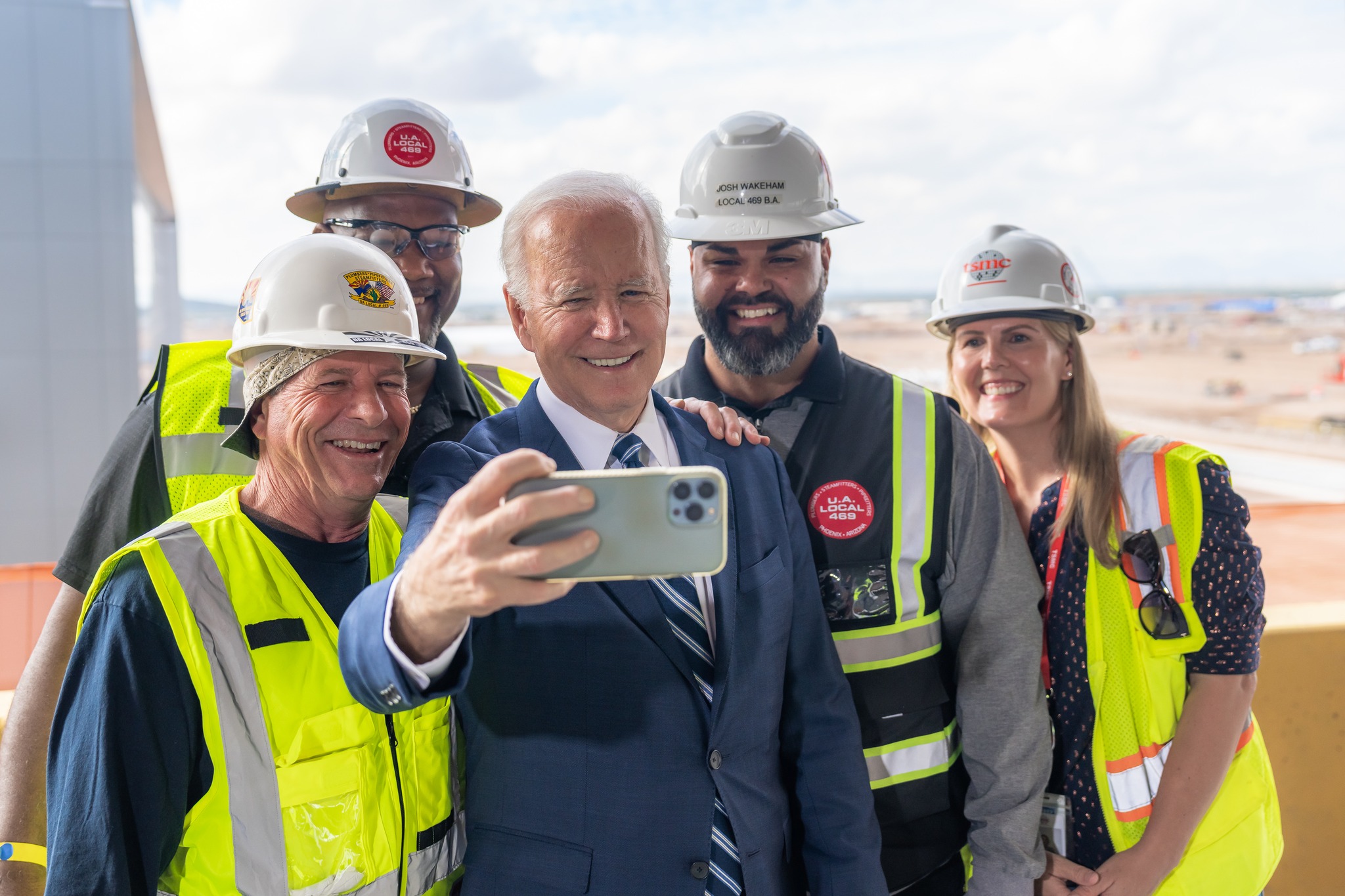 Nate Cohn: “Here’s a figure about the 2022 midterm elections that might surprise you: Republicans won the national House popular vote by three percentage points — 51 percent to 48 percent. They still won by two points after adjusting for races in which only one major party was on the ballot.”

“Yes, that’s right: Republicans won the popular vote by a clear if modest margin, even as Democrats gained seats in the Senate and came within thousands of votes of holding the House.”

“If you’re looking to make sense of the 2022 election, the Republican lead in the national vote might just be the missing piece that helps fit a few odd puzzle pieces together.”

Sen. Joe Manchin (D-WV) “left the door open to one day becoming an independent, three days after Arizona colleague Kyrsten Sinema announced that she was leaving the Democratic Party to become an independent herself,” ABC News reports.

“Joe Manchin is among the last of a dying breed — a Democratic senator representing a deep red state. He’s managed to hang on time and time again in West Virginia by bucking his party on key votes and building a reputation as a centrist,” NBC News reports.

“But Republicans are already betting that in this era of extreme partisanship, and with West Virginia trending further and further to the right, voters will want someone who’s more aligned with the state’s trajectory. Candidates are already eyeing a chance to topple him, setting up the Senate contest there as one of the premiere races of the 2024 cycle.”

“The only thing harder than protecting Democrats’ 51-seat majority during the 2024 election cycle might be finding a senator willing to take on the job,” the HuffPost reports.

“The search has become a struggle for reasons both obvious and obscure. The DSCC chair could have to navigate divisive and ideological intraparty fights in both Arizona and California. The growth in online fundraising has made the connections to big donors that come with the job less valuable than in the past. More than half of the party’s senators are up for reelection or are members of Senate Majority Leader Chuck Schumer’s (D-NY) ever-expanding leadership team.”

“But more than anything, the brutality of the map Democrats are facing would discourage any glory-seeking politician.

The Associated Press mentions a few Republicans who lost in 2022 as possible contenders for the seat held by independent Sen. Kyrsten Sinema, though it’s unclear if any of them are interested. The story name-drops Senate nominee Blake Masters, who ran a widely panned campaign against incumbent Mark Kelly; wealthy businessman Jim Lamon, who lost the primary to Masters; and Karrin Taylor Robson, another self-funder whom many Republicans undoubtedly wished they’d nominated for governor over Kari Lake.

The item also brings up Lake’s name, though NBC previously reported that she was instead encouraging her fellow Big Lie spreader Pinal County Sheriff Mark Lamb, to run instead. Axios additionally lists Rep.-elect Juan Ciscomani as a possibility, but there’s no word if he’s thinking about it.

Sinema, for her part, has yet to say if she’ll campaign in 2024, though the very unpopular incumbent would have a tough time winning if she did. A Sinema candidacy may instead land her in the small group of sitting senators who have taken third place or worse in their general elections, something the University of Minnesota’s Eric Ostermeier reports has happened eight times since voters began electing upper chamber members in 1914.

The last such occurrence was in 1980 when New York incumbent Jacob Javits forged ahead after losing his GOP primary to conservative Al D’Amato: Javits earned 11% as the nominee of the now-defunct Liberal Party, which allowed D’Amato to squeeze out a 45-44 victory against Democrat Elizabeth Holtzman. However, Sinema’s probably safe from avoiding the fate of Colorado Sen. Charles Thomas, a former Democrat who ran for re-election in 1920 under the National Party banner and scored fourth with all of 3%.

State constitutional law expert Quinn Yeargain, writing in their newsletter Guaranteed Republics, also takes a look at what would happen to Sinema’s seat if she left office early. Arizona, Yeargain notes, is one of nine states that requires the governor to appoint someone from the same party as the departed senator, and Yeargain investigates whether incoming Gov. Katie Hobbs would be required to appoint a fellow Democrat to reflect the party label Sinema won this seat under in 2018 or an independent.

Yeargain finds that state law actually addresses this very scenario, with a provision spelling out:

As Yeargain explains, though, things could get very complicated if Sinema won as an independent and resigned later.

Politico: “Though Sinema’s switch avoids a contested Democratic primary, it opens up a nightmare scenario for the party: With three candidates on the ballot, a GOP nominee can capitalize on centrist and liberal divisions and win a Senate seat with a plurality vote.”

“Democrats are not eager to intervene at the moment, but at some point they may have to make a call about whether to support Sinema, back whoever wins a primary or sit out the race altogether.”

California U.S. Senator. Sen. Dianne Feinstein (D-CA) said Monday she has every intention of serving the remainder of her Senate term and is still deliberating whether to retire in 2024, the Los Angeles Times reports.

Colorado 3rd District. As expected, a recount confirmed that Rep. Lauren Boebert (R-CO) narrowly won reelection last month, the Denver Post reports. Democrat Adam Frisch tells Jewish Insider that, while he’s considering seeking a rematch against far-right Rep. Lauren Boebert following his shockingly small loss last month, he’s not in a hurry to decide. “It’s not even 2023, so I think we have some time,” said Frisch.

“Don’t go too far to the left. We didn’t get here in the majority by going to the left — and I can say that as a left-wing San Francisco liberal… Let us win, okay?” — Speaker Nancy Pelosi, quoted by Politico in a new documentary made by her daughter, talking to then-candidate Joe Biden during the 2020 campaign.

Washington Post: “Interviews, internal documents and voting data point to the reasons behind her defeat: The candidate, so focused on parroting Trump and settling personal scores, failed to execute on a plan to court the independents and centrist Republicans who decide elections in Arizona, once a red state that now gleams purple.”

“As advisers urged her to consolidate GOP support after the primary, Lake remained fixated on a grudge match against people loyal to the legacy of the late Sen. John McCain.”

A new CNN poll finds Americans divide almost evenly over whether they have more confidence in the newly empowered Republicans in the US House of Representatives (51%) or in President Joe Biden (49%) to deal with the major issues facing the country today.

“As anger and frustration ripple through the Republican Party over its underwhelming performance in this year’s midterm elections, Republicans are offering a number of explanations for their losses,” the New York Times reports.

“Some in the Trump wing of the party have settled on their own scapegoat: Ronna McDaniel, who has been the chair of the Republican National Committee since 2017. Coming after McDaniel reshaped the committee in the former president’s image — it was even paying his considerable legal bills until recently — this discontent is a striking turn of events.”

“Lackluster candidates nearly cost Republicans what once looked like a can’t-miss House majority. Inside the party, discussions about how to keep that from happening again in 2024 have already started,” Politico reports.

“The GOP gained control of Congress thanks to wins by some of their strongest recruits in years, a cohort that included decorated military veterans and a first-generation American. But far-right, inexperienced and Donald Trump-endorsed candidates lost other winnable seats across the country from Ohio to Michigan to Washington State.”