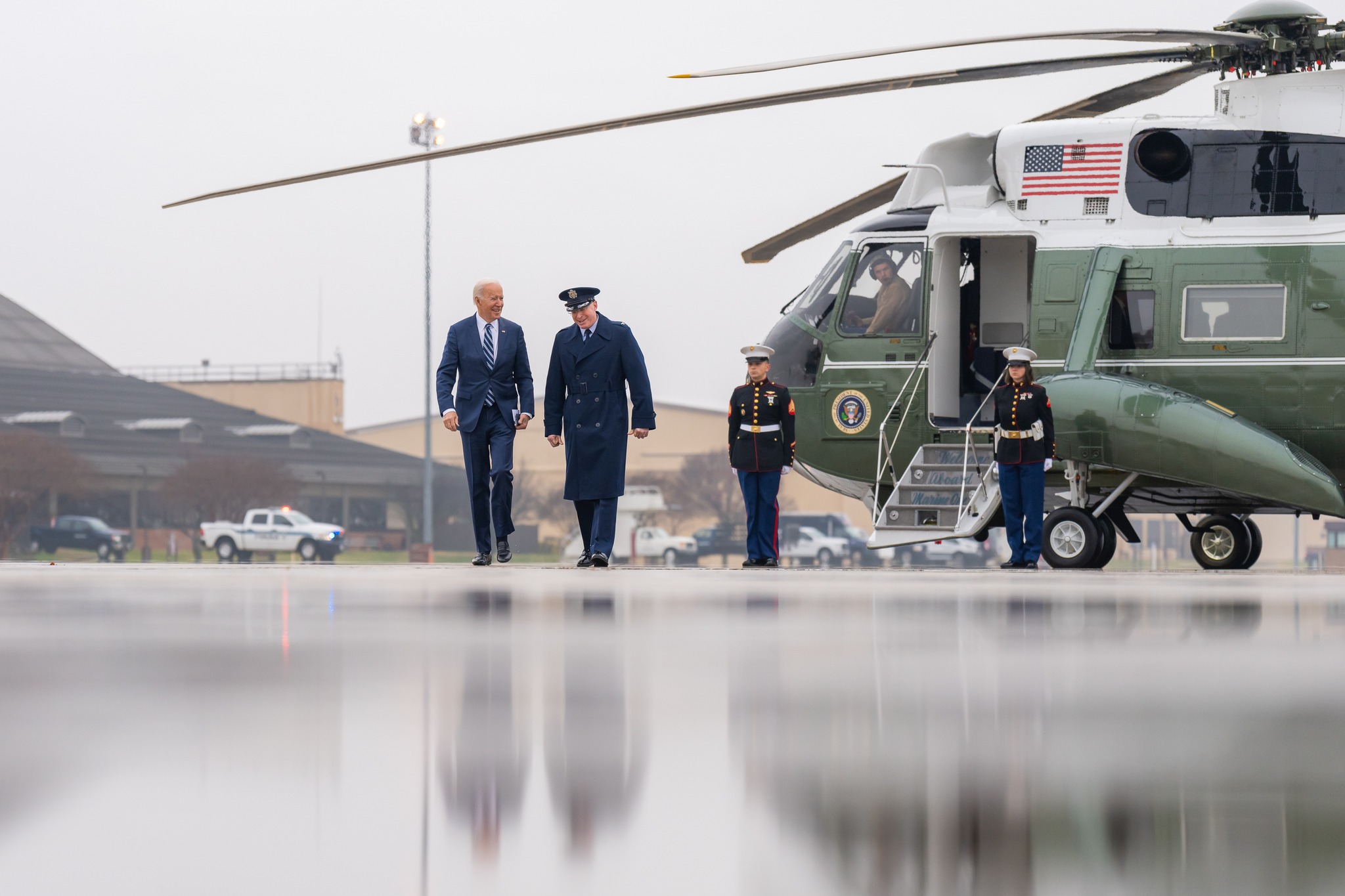 “The measure will be taken up by the House Rules committee today and go to the floor Wednesday. The Senate will then get the bill before Friday’s deadline. The current continuing resolution expires on Dec. 16.”

“Congressional leaders and the White House are struggling to reach a deal on a massive government funding package, warning that they almost certainly will need to pass a short-term measure to avert a shutdown at the end of the week,” NBC News reports.

“Lawmakers had hoped to wrap up their work in the lame duck session by Friday but are now making plans to stay around right up until the Christmas weekend. Some say they may have to return to Washington the week after that as well, putting at risk family vacations and official congressional delegation trips abroad.”

“The fate of the bill is also linked to an election overhaul measure to avoid another Jan. 6, which Senate leaders hope to attach to it. Congress must fund the government before Saturday to avoid a shutdown.”

Wall Street Journal: “Barring a last-minute breakthrough, many businesses will face higher taxes because of changes to how they can deduct research costs and interest expenses. For families, the child tax credit would remain at its current levels, without reinstating temporary expansions that Democrats implemented in 2021. Those changes expired at the end of last year.”

Senate Majority Leader Charles Schumer (D-NY) on Monday said the Senate will likely vote on a short-term funding bill to stave off a government shutdown and buy time for spending talks, The Hill reports.

TPM obtained a new trove of Mark Meadows text messages which provide a real-time record of the plot to overturn the 2020 election.

“They show the senior-most official in the Trump White House communicating with members of Congress, state-level politicians, and far-right activists as they work feverishly to overturn Trump’s loss in the 2020 election. The Meadows texts illustrate in moment-to-moment detail an authoritarian effort to undermine the will of the people and upend the American democratic system as we know it.”

Heather Cox Richardson: “Today, Talking Points Memo began an explosive series covering texts to and from Meadows in the time around the 2020 election and its aftermath….The series, by Hunter Walker, Josh Kovensky, and Emine Yücel, examines texts not previously available to the public as well as some we have already seen.”

Rachel Maddow, who gave over the A block to the Meadows texts, opened with Rep. Ralph Norman (R-SC) text calling for “Marshall law”:

David Frum: “Two concepts of reporting: @TPM breaking new inner-circle details of an ex/president’s plot to over throw an election and the Constitution; new @Twitter and selected writers arguing that well actually, Trump is the true victim here because his attempted coup lost him his account”

“FTX founder Sam Bankman-Fried was arrested by Bahamian authorities this evening after the United States Attorney for the Southern District of New York shared a sealed indictment with the Bahamian government, setting the stage for extradition and U.S. trial for the onetime crypto billionaire at the heart of the crypto exchange’s collapse,” CNBC reports.

Wall Street Journal: “The development is the latest bombshell in a case that has transfixed Wall Street and Washington since FTX, one of the largest crypto exchanges in the world, filed for bankruptcy last month after it ran out of cash and rival Binance walked away from a shotgun merger.”

FTX founder Sam Bankman-Fried was scheduled to appear remotely before the House Financial Services Committee on Tuesday, and is refusing to appear before the Senate Banking Committee at all. But since he was just arrested in the Bahamas, he may be in jail instead.

Lawyers for FTX founder Sam Bankman-Fried “have refused to accept a subpoena for the disgraced cryptocurrency magnate to appear before the Senate Banking Committee,” The Hill reports.

“While Bankman-Fried is set to testify virtually before the House Financial Services Committee on Tuesday, he has refused to commit to appearing before the Senate Banking panel.”

Bloomberg: “While there’s precedent for forcing political entities to return contributions in cases of fraud, recovery prospects are unclear in FTX’s case.”

“Recouping campaign funds as part of the bankruptcy proceedings is a complicated and lengthy process, and the scope of the total funds eligible for clawback depends on myriad federal and state laws.”

“Members of the inner circle of power at collapsed cryptocurrency exchange FTX formed a chat group called ‘Wirefraud’ and were using it to send secret information about operations in the lead up to the company’s spectacular failure,” the Australian Financial Review reports.

“Elon Musk escalated his battle of words with previous managers of Twitter into risky new territory over the weekend, allying himself with far-right crusaders against a purported epidemic of child sex abuse and implying that the company’s former head of trust and safety had a permissive view of sexual activity by minors,” the Washington Post reports.

Energy Secretary Jennifer Granholm was set to announce a “major scientific breakthrough” Tuesday in the decades-long quest to harness fusion, the energy that powers the sun and stars, the AP reports.

“The Covid-19 vaccines have kept more than 18.5 million people in the US out of the hospital and saved more than 3.2 million lives, a new study says – and that estimate is most likely a conservative one,” CNN reports.

“Special counsel Jack Smith has sent a grand jury subpoena to Georgia Secretary of State Brad Raffensperger, bringing to five the number of 2020 battleground states where state or local election officials are known to have received such requests for any and all communications with Trump, his campaign, and a long list of aides and allies,” the Washington Post reports.

“State and local officials in Arizona, Michigan, Pennsylvania and Wisconsin have received similar subpoenas — all of them, like Georgia, central to President Donald Trump’s failed plan to stay in power after the 2020 election.”

“Vladimir Putin has cancelled his annual press conference, as the Russian president faces growing unease over his military’s sputtering campaign in Ukraine,” the Financial Times reports.

“The annual press conference is usually a large-scale event lasting for several hours and attended by hundreds of journalists.”

“The Supreme Court on Monday agreed to hear a second legal clash over President Biden’s ambitious student debt relief plan that is currently blocked by lower courts,” The Hill reports.

“The two cases involve an effort by the Biden administration to reinstate a loan forgiveness program that would give federal borrowers making less than $125,000 a year up to $10,000 debt relief.”

“The Supreme Court is restoring another pre-pandemic tradition, announcing decisions in a public session in the courtroom,” the AP reports.

“Beginning in January, or whenever the first opinions of the term are ready, the justices will read summaries of their majority opinions from the bench.”

Tara Palmeri: “Ron Klain’s longevity was supported, at least on some level, by the return of Anita Dunn, who quickly made her mark as a messaging guru for Biden when she arrived back in the White House in April. In short order, she’s ridden the wave of legislative victories for Biden and helped shift the narrative toward a contrast between Biden and a Trump-dominated Republican party.”

“Well-informed sources tell me that Biden has made it clear that he wants Dunn to move up as chief of staff whenever Klain does decide that his time has come, rearranging the deck chairs of his inner circle, where he trusts few and opts against change. The feeling is that Dunn’s strong political instincts are mission critical for the job.”

“Dunn, for her part, has said explicitly, as recently as last month, that she will not be taking the chief of staff job after Klain leaves—whenever that might be. But who knows whether Biden’s desire might be able to overcome this opposition.”

“As Republicans promise to investigate the investigation, staffers are looking to lawyer up — and preparing for their work lives to be turned upside down embers and staff of the the Jan. 6 committee are actively preparing for a multi-pronged Republican revenge campaign when the GOP takes the House next month, anticipating an all-out effort to discredit the panel’s work and punish its workers,” Rolling Stone reports.

“As the committee readies its final report, staff are also preparing for their investigation to be investigated, including with subpoenas seeking access to a year-and-a-half of their private communications, emails, and other documents.”

“Donald Trump is planning to release a book next year showcasing his private correspondence with past and present celebrities and international icons,” CNN reports.

“Sources familiar with the matter said the project will mirror Trump’s first post-White House book, a collection of 300-plus photographs from Trump’s time in office that were accompanied by captions he wrote himself. His newest book will contain reproductions of letters written to, or by, Trump over the last few decades, providing readers with a more intimate view into his private life and past social circles.”

Rep. Marjorie Taylor Greene (R-GA) on Monday said her recent comment that the Jan. 6, 2021, Capitol attack would have been armed and successful if she planned it was “sarcasm,” after she drew rebukes from the White House and Democratic leaders, The Hill reports.

Said Greene: “The White House needs to learn how sarcasm works. My comments were making fun of Joe Biden and the Democrats, who have continuously made me a political target since January 6.”

Said Manley: “He would have handled it the exact same way as Senator Schumer has, in that as leaders you have to keep your eye on the prize. And that means realizing that despite her incredibly selfish move to bolt from the party a day or so after the special election in Georgia, she will still allow the Democrats to keep control of the Senate. And in the end that’s all that matters.”

He added: “There’s no room here for LBJ- style threats or retaliation. As long as she votes to make Senator Schumer the next majority leader of the Senate that’s the whole game. Senator Reid defended then-Senator Lieberman when the left demanded that he be stripped of his committee chairmanship after viciously attacking then candidate Obama during the 2008 election.”

President Biden is planning a multi-country trip to Africa next year, with an announcement expected to be made at this week’s U.S.-Africa summit, Axios reports.

“But African leaders have grown accustomed to being courted by foreign suitors, and Washington is one stop on what has become a global circuit of Africa summits held by China, Russia, Turkey, France, Japan and the European Union.”