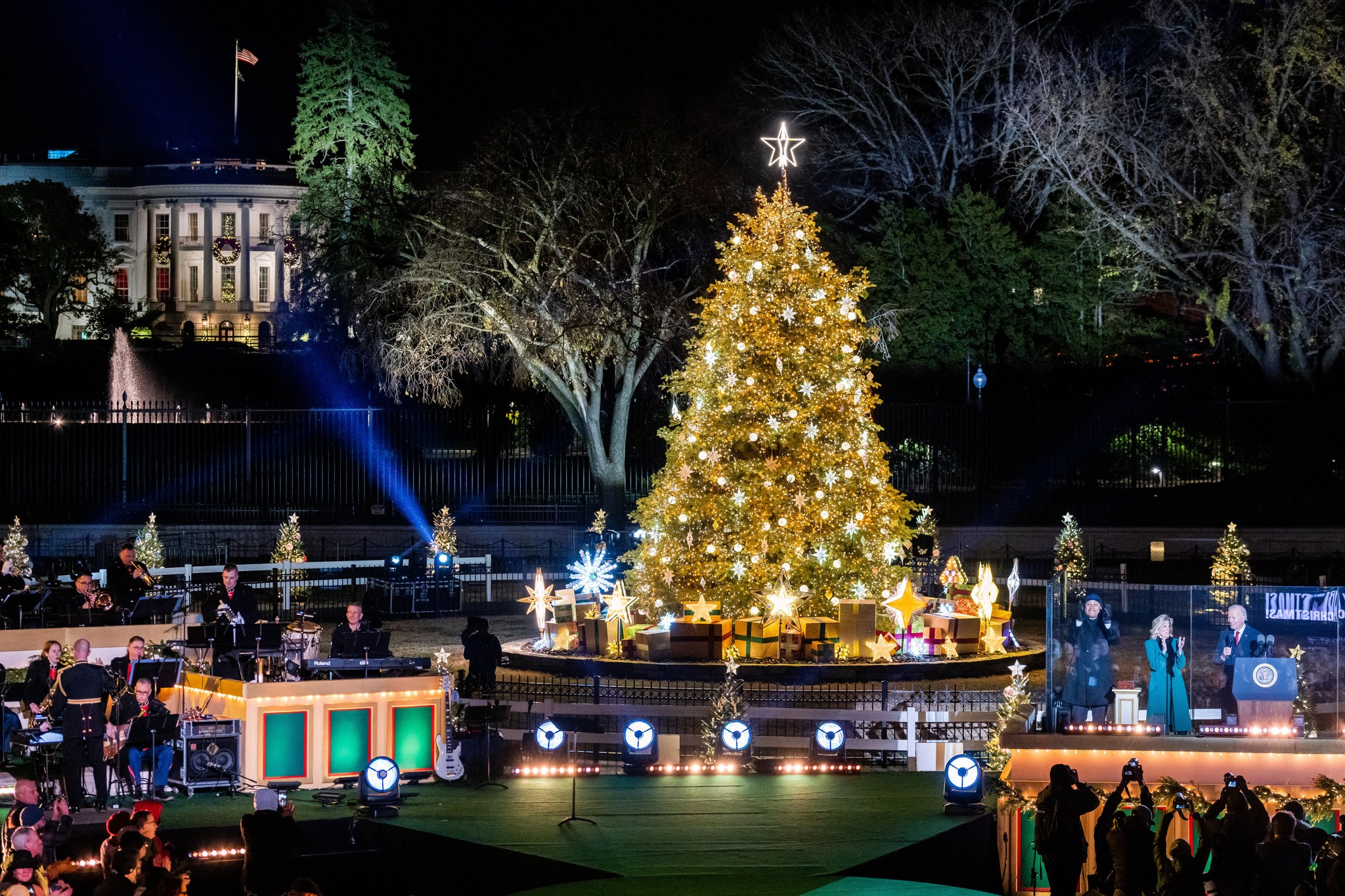 “Drafts of the report, which the people briefed say have been circulating among committee members for weeks, include thousands of footnotes drawn from the panel’s interviews and research over the past 16 months into Trump’s activities in the frenzied final weeks that preceded Jan. 6, 2021 — when a mob of his supporters battered police and stormed the Capitol.”

“I want to tell you something, if Steve Bannon and I had organized that, we would have won. Not to mention, we would’ve been armed.”— Rep. Marjorie Taylor Greene (R-GA), quoted by the New York Post, on the January 6 Capitol riots.

Quite a confab Saturday night in Manhattan. The annual gala of the New York Young Republican Club featured far-right extremists hobnobbing with other Republicans and Don Jr. Marjorie Taylor Greene was a hit of the evening, parrying charges that she and Steve Bannon were responsible for Jan. 6 by declaring that they would have done a far better job at insurrecting.

The Southern Poverty Law Center sent people to the event and their descriptions of the scene are really quite something:

While answering questions, Posobiec grew testy with a Hatewatch reporter and described SPLC as a “domestic terror organization.” Posobiec called that reporter a “scumbag” and a “troll.” After Posobiec’s speaking tone became palpably agitated, a crowd formed and NYYRC executive secretary Viswanag “Vish” Burra escorted both Hatewatch reporters to the exit, physically shoving one of them.

“House and Senate appropriators made enough progress in bipartisan discussions over the weekend that Democrats are putting on hold plans to introduce their own versions of a fiscal 2023 omnibus and yearlong stopgap funding bill,” Roll Call reports.

Playbook: “Government funding runs out Friday. Talks have stalled for weeks as the parties wrangle over funding levels, with Republicans thus far refusing to give Democrats the nondefense plus-ups they desire. Could the distant chime of jingle bells finally be having an effect?”

“There’s no way an omnibus can be negotiated, drafted and passed in the next five days, so expect another stopgap to move this week. Beyond that? There’s already chatter about negotiations dragging right up to and even through the holiday season. We’ll see who blinks first.”

Federal spending expires on Friday, and while most expect another continuing resolution running through at least December 23, Republican leaders remain divided, with Senate Minority Leader Mitch McConnell seeking a short-term fix and House GOP leader Kevin McCarthy holding off for a longer-term agreement after the party takes control of the House in early January. The two parties are just $26 billion apart on a topline number for an omnibus deal, but the remaining divisions are ideological, not financial.

“The White House has privately signaled to Democrats that it would support a compromise deal to revive the expanded Child Tax Credit, even if it includes work requirements it once opposed,” Politico reports.

“A remarkable shift for an administration that has resisted applying such conditions to anti-poverty programs, it comes amid a recent push in Congress to include an expansion in a year-end legislative package while Democrats still control both chambers. And it reflects the growing urgency within the administration to salvage a policy that ranks among President Joe Biden’s signature achievements.”

Business groups are pressing for a bipartisan immigration bill by the end of the year, but the clock makes that unlikely — as does the fact that one of the chief negotiators between the parties has been Sen. Kyrsten Sinema (I-AZ), and Democrats may not be in the mood to boost her profile.

“Newly-appointed special counsel Jack Smith is moving fast on a pair of criminal probes around Donald Trump that in recent months have focused on the former president’s state of mind after the 2020 election, including what he knew about plans to impede the transfer of power,” CNN reports.

CNN has a good bit of new detail on the inner workings of special counsel Jack Smith’s investigations. It looks less like Mueller’s separate setup and more like a U.S. attorney operating within the Justice Department. One thing that caught my eye, because it hasn’t fully been on my radar, is a financial crimes component of the investigation:

“Another top prosecutor, JP Cooney, the former head of public corruption in the DC US Attorney’s Office, is overseeing a significant financial probe that Smith will take on. The probe includes examining the possible misuse of political contributions, according to some of the sources. The DC US Attorney’s Office, before the special counsel’s arrival, had examined potential financial crimes related to the January 6 riot, including possible money laundering and the support of rioters’ hotel stays and bus trips to Washington ahead of January 6.

Former U.S. attorney Preet Bharara told NBC News that the Department of Justice is “on a path to charge” former President Donald Trump. Bharara pointed at the creation of a legal team that includes “a number of very seasoned prosecutors” who were brought on to assist the probe. Said Bharara: “I don’t think they would’ve left their former positions, both in government and private practice, unless there was a serious possibility that the Justice Department was on a path to charge. And I think it’ll happen in a month.”

Elon Musk poke at Dr. Anthony Fauci, suggesting in in a tweet that nation’s top infectious disease expert should be prosecuted.

Said Musk: “My pronouns are Prosecute/Fauci.”

Joshua Green: “For years, Donald Trump has survived scandal, scorn and defeat and still managed to keep his warlord grip on the Republican Party. Even this month’s epic string of disasters, from his candidates’ losses in the midterms and his dinner with white supremacist Nick Fuentes and professed Hitler-fan Ye (Kanye West) to the tax fraud convictions of two of his companies, might not derail him.”

“But irrelevance might. In the critical weeks since his Nov. 16 campaign launch, the person who has dominated the right-wing attention economy isn’t Trump. It’s Elon Musk.”

“Musk didn’t just take over Trump’s favorite medium, Twitter. He seems to have done so for the explicit Trumpian purposes of striking back at his critics, ‘owning the libs,’ and stoking the sort of generalized chaos that was once Trump’s calling card, before he was banished from Twitter and took up exile in the empty wilderness of Truth Social. He’s succeeded on all fronts.”

“Elon Musk, the billionaire who wants nothing more in life than to be adored by legions of fans, was loudly booed by a crowd in San Francisco on Sunday night after he was invited onstage by comedian Dave Chappelle,” Gizmodo reports.

“And the footage is pretty rough, even if you don’t particularly like Musk.”

BBC: “German security services were sufficiently concerned about the attempted coup to launch one of their biggest ever raids, nationwide and beyond (in Austria and Italy), involving 3,000 officers, searching 150 properties and arresting 25 people in total.”

“Intelligence officers told us to expect more detentions in the coming weeks and months as the investigation continues. And German media is buzzing with talk of increased security in and around the country’s federal and regional parliaments.”

The NYT goes deep on the Prince Heinrich XIII of Reuss, the alleged co-ringleader of the German coup plot who was to be installed as the new head

“Iran executed a second prisoner on Monday convicted over crimes committed during the nationwide protests challenging the country’s theocracy, publicly hanging him from a construction crane as a gruesome warning to others,” the AP reports.

“Covid is rapidly spreading through Chinese households and offices after the country’s pandemic rules were unexpectedly unwound last week, sparking confusion on the ground as ill-prepared hospitals struggle to deal with a surge in cases,” Bloomberg reports.

“Despite pleas from state media and health experts for people to self medicate and recover at home, many citizens — fearful of the virus after three years of propaganda that painted it as dangerous — are flocking to hospitals. Some facilities are struggling to find enough staff and others are suspending non-Covid treatments as health-care workers say they’re scrambling to meet demand for care following China’s Covid Zero reversal.”

“Peru’s newest president, Dina Boluarte, gave in to protesters’ demands early Monday announcing in a nationally televised address that she will send Congress a proposal to move up elections,” the AP reports.

Hill said that a prisoner swap was raised several times by Russian officials who “had every intent” on trading Americans wrongfully detained overseas for individuals in U.S. custody.

Said Hill: “He was not particularly interested in Paul’s case in the way that one would have thought he would be.”

Trump claimed on social media that he turned down a deal.

Treasury Secretary Janet Yellen predicted on 60 Minutes that inflation would substantially decline by the end of 2023.

Said Yellen: “I believe by the end of next year you will see much lower inflation if there’s not an unanticipated shock.”

She also said a recession wasn’t inevitable: “There’s a risk of a recession but it certainly isn’t in my view something that is necessary to bring inflation down.”

“The Department of Energy plans to announce Tuesday that scientists have been able for the first time to produce a fusion reaction that creates a net energy gain — a major milestone in the decades-long, multibillion-dollar quest to develop a technology that provides unlimited, cheap, clean power,” the Washington Post reports.

“The aim of fusion research is to replicate the nuclear reaction through which energy is created on the sun. It is a “holy grail” of carbon-free power that scientists have been chasing since the 1950s. It is still at least a decade — maybe decades — away from commercial use, but the latest development is likely to be touted by the Biden administration as an affirmation of a massive investment by the government over the years.”

Jonathan Bernstein: “Yes, being on a team sometimes means compromising. But Sinema should know that compromises are part of legislating. And parties make legislating a lot easier. Parties allow (more-or-less) stable coalitions to work together to get things done. Without them, a legislature could devolve into chaos as assorted factions block different proposals.”

“Indeed, as Sinema should know, the utility of parties in the Senate actually extends into bipartisan deals. Take the immigration bill she and Republican Senator Thom Tillis of North Carolina are working on with an eye toward getting it adopted before this Congress ends.”

“When Sinema was operating as Democrat, Tillis could cut deals on the Republican side knowing that Sinema was able to negotiate in good faith for her party. That could still be the case if Sinema winds up acting as a de facto Democrat. But her ability to speak for Senate Democrats can no longer be assumed.”

The Guardian: “Whether the US justice department continues to pursue the Trump-era charges against the notorious leaker [Julian Assange], whose group put out secret information on the wars in Iraq and Afghanistan, Guantánamo Bay, American diplomacy and internal Democratic politics before the 2016 election, will go a long way toward determining whether the current administration intends to make good on its pledges to protect the press.”

“Now Biden is facing a re-energized push, both inside the United States and overseas, to drop Assange’s protracted prosecution.”