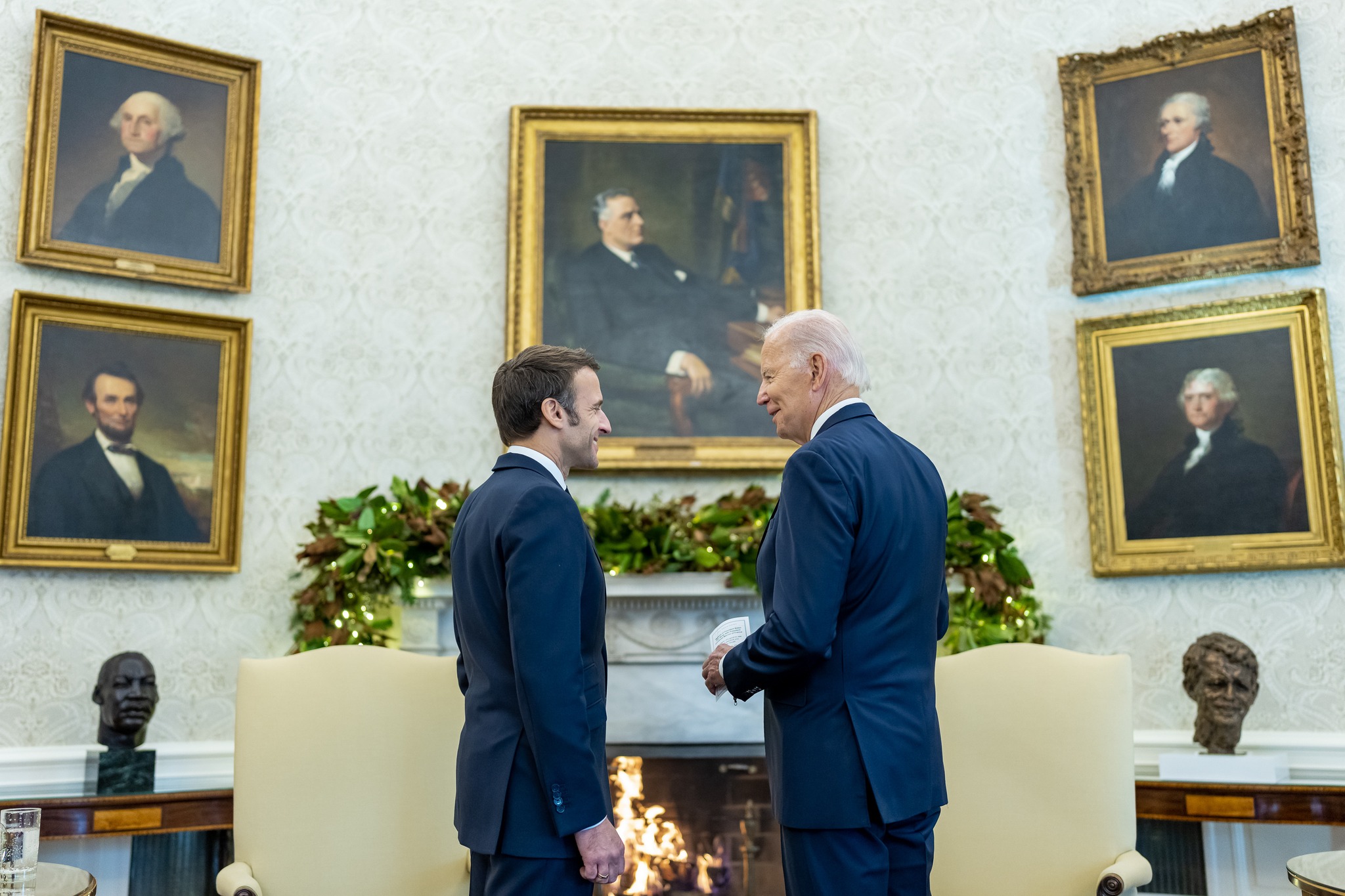 Playbook: “The conventional wisdom of American politics is that the two-party system makes it difficult, albeit not impossible, to win as an independent. In the Senate, Bernie Sanders and Angus King have done so, but they are pretty much viewed as Democrats by another name, and the state and national party organizations have never marshaled resources to defeat them.”

“Sinema won’t be in the same boat. She’s bucked her party many a time and made rare alliances with Republicans. While she will be accepting committee seats from Schumer, she appears to be distancing herself from the Democratic caucus, and because of that, she risks being secluded on a political island.”

“While Biden and Schumer have so far been conciliatory, the state Democratic Party and a potential 2024 challenger, Rep. Ruben Gallego, have not — both attacking her for acting out of self-interest rather than the state’s interest.”

Politico: “While she’s always been a strong fundraiser, she would lack party resources — like a ground game — that are critical for voter turnout, particularly in a sprawling state like Arizona. Republicans in the state, even if some do support her, would not be expected to assist with that.”

Nate Silver: “Sinema was not very popular with anyone, I’m not sure whether today’s move increases or decreases her chances of winning another term (I actually suspect decreases) but they were low to begin with and they remain low.”

“He’s a shame to Democrats… I don’t even know why he’s running. He seems to want to get Republicans voting for him — what kind of strategy is that?” — Sen. Kyrsten Sinema, quoted by Mother Jones in 2003, criticizing Sen. Joe Lieberman for leaving the Democratic party to be an independent.

“Donald Trump is leveling criticism at Jewish leaders for not expressing enough ‘loyalty’ towards him in the wake of his dinner with two antisemitic Holocaust deniers at his Mar-a-Lago home,” Rolling Stone reports.

Said Trump, on Truth Social: “Jewish Leaders forgot that I was the best, by far, President for Israel. They should be ashamed of themselves. This lack of loyalty to their greatest friends and allies is why large numbers in Congress, and so many others, have stopped giving support to Israel.”

“Russia refused to release Paul Whelan alongside Brittney Griner unless a former colonel from Russia’s domestic spy organization currently in German custody was also released as part of any prisoner swap, even as the US offered up the names of several other Russian prisoners in US custody that they would be willing to trade,” CNN reports.

“The US was unable to deliver on the request for the ex-colonel, Vadim Krasikov, because he is serving out a life sentence for murder in Germany.”

The U.S. has authorized a new $275 million aid package for Ukraine to address “critical security and defense needs,” Axios reports.

“Russia launched fresh attacks with Iranian-made drones early Saturday over Ukraine, where the country’s southern command said it shot down 10 of the unmanned aerial systems, an indication that Moscow has replenished its supply of the drones as the two countries move toward what the U.S. has called a full defense partnership,” the Wall Street Journal reports.

New York Times: “Friday evening, continuing to take questions in a news conference after his spokesman tried to end it, President Vladimir Putin of Russia put forward a blunt thesis on the nature of truth.”

Said Putin: “You can’t trust anyone. You can only trust me.”

“It was a fitting coda to a week that saw Mr. Putin particularly busy in constructing his version of reality at a time when a Russian victory in Ukraine appears as distant as ever. In a marathon of public appearances that began on Monday with a televised drive across Russia’s damaged bridge to Crimea, Mr. Putin held forth on nuclear doctrine, prisoner swaps with the United States, supposed Polish revanchism and even the ‘very harsh’ practices of European zoos.”

New York Times: “Within hours of Ms. Griner’s release, much of the right wing was in full outrage mode, seizing upon both the man Ms. Griner had been exchanged for — Viktor Bout, a notorious Russian arms merchant serving time, in part, for endangering American lives — and the Biden administration’s failure to secure the release as well, or instead, of a former Marine, Paul Whelan, who has languished in a Russian prison since his 2018 arrest on espionage charges.”

“A considerable amount of attention was also paid to who Ms. Griner is: a Black woman, a celebrity, a married lesbian and, though it had gone largely unnoticed until now, an assertive liberal — one who, at the height of the Black Lives Matter protests, called to stop playing the national anthem at her team’s basketball games.”

“The main war that is taking place right now is the war over people’s minds. All of us in this room are the special forces fighting this war.” — Sergei Kiriyenko, longtime aide to Russian President Vladimir Putin, quoted by the Wall Street Journal.

“Senate Republican leaders including Mitch McConnell (R-KY) are digging in against expanding any part of the Child Tax Credit in the lame-duck session of Congress,” Semafor reports.

“The Senate GOP’s resistance all but extinguishes the odds of Democrats clinching a last-minute victory on expanding the reach of the program to more poor families, which they had hoped to do before the new House gavels in next month under Republican control.”

“In return for an expansion of the child credit, Democrats have said they would agree to restore longstanding corporate tax deductions for research and development that were curtailed this year. But Republicans don’t view their offer as a serious trade, because Democrats are largely in favor of reviving the R&D provisions as well.”

“Sen. Charles Schumer (D-NY) was reelected Thursday to serve another term as Senate majority leader, capping a successful two years for the veteran lawmaker, who was just reelected to a fifth Senate term,” The Hill reports.

Daily Caller: “In order to placate the doubters, McCarthy and his allies have commenced a substantial whipping operation… The Republican leader is prepared to offer the holdouts prized committee seats through the Steering Committee.”

“Hunter Biden’s friend and lawyer Kevin Morris was blunt in laying out his thoughts at a strategy session last September on an expected onslaught of investigations by House Republicans: It was crucial, he suggested, for Biden’s camp to be more aggressive,” the Washington Post reports.

“At one point, Biden himself happened to call into the meeting, connecting briefly by video to add his own thoughts.”

“Some of the largest business groups in Washington are making a last-ditch effort to get Congress to pass immigration legislation before the end of the year and are optimistic a bipartisan agreement could fall into place,” NBC News reports.

“Companies in a range of industries, from agriculture to technology, have long urged Congress to make changes to the immigration system to allow for more foreign-born workers and thereby address widespread worker shortages.”

“But with deep partisan divides on the issue, there was little optimism of a deal getting done, until this past week when Sens. Kyrsten Sinema (I-AZ) and Thom Tillis (R-NC) began circulating the contours of a possible deal.”

“Thousands of previously banned Twitter users, including members of the far-right and users sharing blatant misinformation, have begun to have their accounts restored to the platform,” CNN reports.

Sam Bankman-Fried, founder of the collapsed crypto exchange FTX, said that he will testify next week before the House Committee on Financial Services, the Wall Street Journal reports.

Ben Gerson: “The US Department of Justice is not an independent agency, like the Securities and Exchange Commission or the Federal Trade Commission. Its head, the attorney general, is not just the country’s lawyer in chief. He is a member of the Cabinet, which was created to advise the president on all manner of things, including national security, the president’s chief responsibility. The Justice Department itself has a National Security Division. Another of its divisions is the Federal Bureau of Investigation.”

“Obviously, Attorney General Merrick Garland has always known all this. Nonetheless, in the face of an organized and multifaceted threat to national security—involving President Donald Trump’s misappropriation of state secrets, attempts to subvert fair elections, and ultimately the weakening of this country’s international standing—Garland’s actions, or, rather, his lengthy pattern of inaction, suggests a deference to other facts and considerations. Garland continued to procrastinate—ostensibly in search of an exorbitant level of proof that might finally convince Donald Trump’s followers that their hero is a criminal.”

Said McDaniel: “It was probably a bigger factor than a lot of people thought. We’ve got to get conversant on that.”

She added: “We can’t just do an ostrich method and pretend that it doesn’t exist when Democrats are spending $30 million on that message.”

“President Biden next week will announce U.S. support for the African Union to become a permanent member of the Group of 20 nations, a step that would give African nations a long-sought prize and could make it easier for Biden to secure their cooperation on issues like Ukraine and climate change,” the Washington Post reports.

“The G-20 is a highly influential forum for the world’s most powerful economies, and South Africa is the only member from the continent, joining multiple participants from Europe, Asia and the Americas.”

“A decline in social status relative to better-paid peers is a key reason why so many American men have dropped out of the labor force, according to the latest paper to examine a conundrum that’s baffled economists for decades,” Bloomberg reports.

“Men’s sense of their status in the labor market is highly dependent on how much they earn compared with male peers of similar age… And as their wages got left behind by the earnings of their better-educated peers, men without a college degree have been more likely to exit the labor force… Younger, White men in particular are more inclined to leave the job market when their expected wages fall in relative terms.”

The Justice Department is in search of a custodian of records for Donald Trump to hold accountable for the failure to return classified documents and other government materials in the Mar-a-Lago case. But because Trump has always run his affairs like a maniac, DOJ may not find one.

One of the key areas of disagreement centers on the Trump legal team’s repeated refusal to designate a custodian of records to sign a document attesting that all classified materials have been returned to the federal government, according to two of these people. The Justice Department has repeatedly sought an unequivocal sworn written assurance from Trump’s team that all such documents have been returned, and Trump’s team has been unwilling to designate a custodian of records to sign such a statement while also giving assurances that they have handed documents back.

“Iran said Thursday it executed a prisoner convicted for a crime allegedly committed during the country’s ongoing nationwide protests, the first such death penalty carried out by Tehran,” the AP reports.

“The execution comes as other detainees also face the possibility of the death penalty for their involvement in the protests, which began in mid-September, first as an outcry against Iran’s morality police. The protests have since expanded into one of the most serious challenges to Iran’s theocracy since the 1979 Islamic Revolution.”