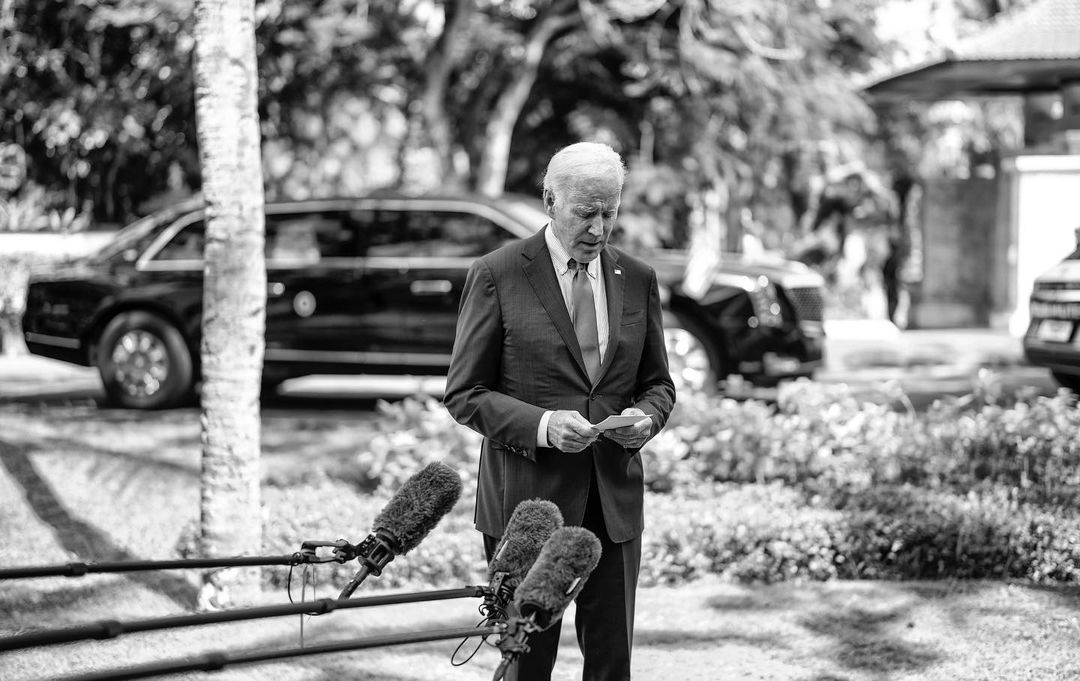 Republicans still considering how to respond to Donald Trump’s dinner with Ye and Nick Fuentes will this week also face questions about Trump’s call for the “termination of all rules…even those found in the Constitution” in order to reinstate Trump as president. It’s safe to predict that most will have little to say about either.

“I hate to inform the former president, the Constitution is not like a spouse. You can’t just get rid of it when it no longer suits your purposes.”— GOP strategist Alice Stewart, on CNN.

“Suggesting the termination of the Constitution is not only a betrayal of our Oath of Office, it’s an affront to our Republic.” — Sen. Lisa Murkowski (R-AK), on Twitter, pushing back on Donald Trump’s call to suspend the U.S. Constitution.

New York Times: “An extraordinary antidemocratic statement from former President Donald Trump, suggesting the ‘termination’ of the Constitution to overturn the 2020 election, drew a degree of bipartisan condemnation over the weekend, with a flood from Democrats and a trickle from Republicans.”

“But it did not appear to do any more than similar past actions in prompting Republican officials to rule out supporting Mr. Trump in 2024.”

“Inaccurately describing the contents of a just-released report about Twitter’s moderation decisions during the 2020 campaign, Mr. Trump again demanded that the 2020 election be overturned or rerun, for the first time explicitly calling to set aside the supreme law of the land.”

Donald Trump called for “termination” of the U.S. Constitution this weekend so that he could be president again. This outrageous statement reflects the desperation Trump apparently feels as his grip on the Republican party loosens and his legal reckoning in multiple investigations draws closer. As nuts as it seems, it’s actually classic Trump.

Having spent more than a week suffering from the fallout from his dinner with white supremacist Nick Fuentes and Nazi sympathizer Kanye West, Trump needed to do something — anything — to change the news. The midterm elections are now widely seen as a rebuke to Trump and the high-profile candidates he backed. It’s prompted a flood of Republican lawmakers to suggest it may be time to move on from Trump (with the caveat that nearly all still say they would support him if he won the GOP nomination).

On the legal front, Attorney General Merrick Garland appointed Special Counsel Jack Smith to take control of two federal criminal investigations into Trump. In Georgia, Fulton County District Attorney Fani Willis is in the final stages of her investigation into Trump’s attempt to overturn the election. And in New York, the Trump Organization’s trial for tax fraud is nearing a verdict just as House Democrats have finally obtained Trump’s tax returns.

The cascading fallout from the Nazi dinner at Mar-a-Lago proved Trump had lost control of the news. He was apparently willing to do anything to change the headlines — even if it was an attack on the U.S. Constitution, the foundation of our government. That reflects the gravity of his current political problems.

On Wednesday, the Supreme Court will hear arguments in Moore v. Harper. While the North Carolina case deals with redistricting, the question before the court revolves around whether state courts have a constitutional role in reviewing new congressional maps, or if that power resides entirely with state legislatures.

House Minority Leader Kevin McCarthy (R-CA) said the potential handful of GOP lawmakers opposing his bid for Speaker stand the risk of “squandering this majority” when it comes to the Republican takeover of the House in the next Congress, The Hill reports.

Said McCarthy: “Right now, it’s actually delaying our ability to govern as we go. So I’m hopeful that everybody comes together, finds a way to govern together. This is what the American people want. Otherwise, we will be squandering this majority.”

Apparent attacks on two electrical substations Saturday evening have left tens of thousands of residents of Moore County, North Carolina without power. “Authorities have confirmed that at least two substations were damaged by gunfire on Saturday night,” the local newspaper reported.

The whole county was under a curfew Sunday night, and schools were closed Monday. The power outage occurred during a local drag show that had attracted protestors, but authorities were not connecting the two events yet.

With no suspects or motive announced, the FBI is joining the investigation into power outages in a North Carolina county believed to have been caused by “intentional” and “targeted” attacks on substations that left around 40,000 customers in the dark Saturday night, prompting a curfew and emergency declaration, CNN reports.

The Atlantic: “Marjorie Taylor Greene arrived in Congress in January 2021, blond and crass and indelibly identified with conspiracy theories involving Jewish space lasers and Democratic pedophiles. She had barely settled into office before being stripped of her committee assignments; she has been called a ‘cancer’ on the Republican Party by Senate Minority Leader Mitch McConnell; and she now has a loud voice in the GOP’s most consequential decisions on Capitol Hill because her party’s leaders know, and she knows they know, that she has become far too popular with their voters to risk upsetting her.”

“Nobody saw her coming. Not even Greene saw Greene coming.”

“When Covid-19 struck, the U.S. government gave hospitals tens of billions of dollars to help them cope with the strains of the pandemic,” the Wall Street Journal reports.

“Many of the hospitals didn’t need it.”

“The aid enriched some well-off systems, while failing to meet the needs of many that were struggling.”

“The mismatch stemmed in part from the way the federal government determined how much a hospital should get. A main factor used to allocate relief was a hospital’s revenue, rather than Covid caseload or financial distress. The idea was that revenue was a good indicator of a hospital’s size.”

“A post-Thanksgiving uptick in covid-19 patients at U.S. hospitals is arriving even as health systems contend with waves of feverish, coughing people stricken with RSV and influenza infections,” the Washington Post reports.

Axios: “The worst flu outbreak in more than a decade has left nearly every state with high or very high levels of flu activity, underscoring how pandemic precautions may have left us more vulnerable to seasonal respiratory diseases.”

“The push by Sen. Joe Manchin to overhaul the nation’s permitting process for infrastructure projects could get some last-ditch help from the House of Representatives, in its annual defense policy measure,“ the Washington Post reports.

“New text of the defense bill that includes the permitting bill could be released Monday before the House Rules Committee considers the measure.”

“Rep. Mike Turner (R-OH), the top Republican on the House Intelligence Committee and it’s likely next chairman, said planning is underway for Director of National Intelligence Avril Haines to brief lawmakers on the circumstances surrounding classified documents seized from former President Trump’s Mar-a-Lago property over the summer,” The Hill reports.

Said Zandi: “It’s going to be a struggle. It’s going to feel uncomfortable. But I think we are going to thread the needle.”

“A massive bill setting defense policy is likely to end the military vaccine mandate, coming on the heels of intense GOP lobbying to kill the mandate and acceptance from leading Democrats that it’s time for a change,” CNN reports.

“The efforts to discipline attorneys who aided former President Donald Trump’s legal gambits to undermine the 2020 election take a major step forward Monday with the start of key disciplinary proceedings in Washington, DC, that will look into whether Rudy Giuliani violated attorney ethics rules,” CNN reports.