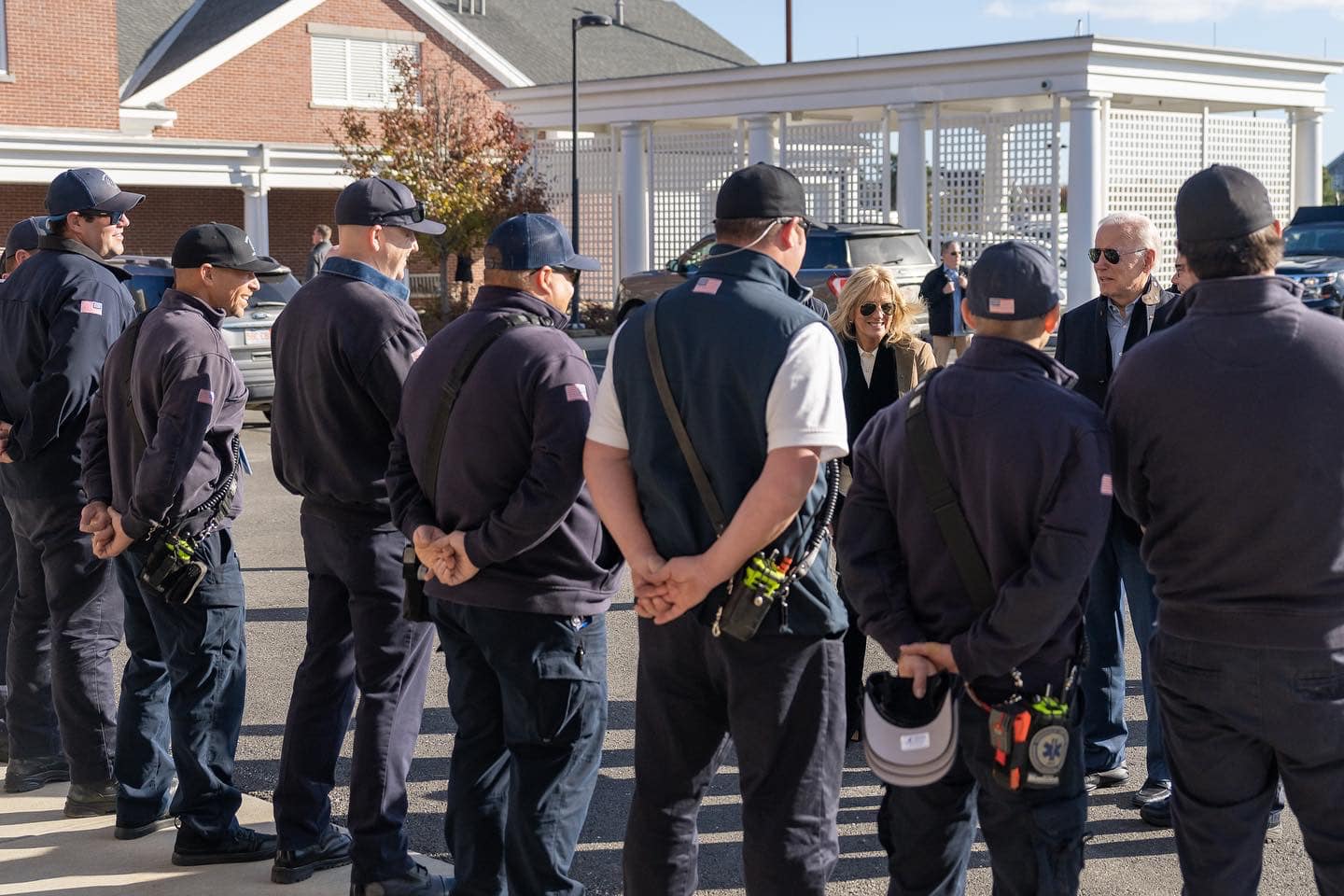 “House Republicans are playing high-stakes tug of war with Kevin McCarthy’s speakership dreams. And now both sides are digging in their heels,” Politico reports.

“On the GOP leader’s right, conservatives are meeting with House rules officials to strategize ahead of a planned floor challenge to McCarthy during the speakership vote on Jan. 3. Meanwhile, centrist Republicans are making threats of their own to colleagues who’d bulldoze McCarthy — including that they’ll work with Democrats to recruit a GOP speaker candidate more to their liking.”

Meanwhile, McCarthy’s official website already lists him as speaker-elect, despite his bid not yet having enough GOP votes, TPM reports.

“House Freedom Caucus Chairman Scott Perry (R-PA) said in a brief interview Wednesday ahead of the conference vote that scrapping earmarks would be a ‘pretty important marker’ as conservatives weigh whether to lend McCarthy their support for speaker in a floor election Jan. 3.”

Semafor: “The conservative rebellion against Speaker-not-quite-elect Kevin McCarthy continues, with a small but significant group of members declaring themselves a hard “no” on his candidacy. If even a handful of holdouts don’t crack, McCarthy will face an impossible math problem that will force Republicans to produce someone else.”

“To which McCarthy’s allies have a retort: Who?”

Washington Post: “The midterms have left Greene in unfamiliar territory. House Republicans are back in power for the first time since she arrived in Washington, but just barely. Many Republicans have blamed her wing of the party — the election-denying, unabashed Trumpists — for dragging down what they had expected to be huge gains for the GOP. And yet the narrowness of the new Republican majority means that McCarthy can’t afford to alienate too many members if he wants to win the gavel when Congress convenes Jan. 3.”

“That has created an opening for Greene, who spent her first term on Washington’s fringe, to attach herself to McCarthy and make her play for more influence, even as prominent Republicans are trying to nudge the party away from her political North Star, former president Donald Trump.”

“Former president Donald Trump’s refusal to apologize for or disavow the outspoken antisemites he dined with last week is setting him increasingly at odds with leaders of his own party, providing the first test of his political endurance since launching his third run for the White House,” the Washington Post reports.

“The fracas is also testing how Republicans will handle the party’s extreme fringe in the months ahead after years of racist, misogynist and antisemitic speech flooding into the political bloodstream during the Trump era.”

“Trump has been taken aback by the backlash and maintained that the controversy over his Mar-a-Lago dinner with white nationalist Nick Fuentes and the rapper Ye, who has been vocally spouting antisemitic conspiracy theories, would blow over.”

Tina Nguyen: “The Trump ’24 campaign, after all, was hardly off to a rollicking start even before Ye and his entourage rolled into Mar-a-Lago. First there was Trump’s deflating campaign announcement—a long-winded diatribe that prompted multiple audience members to attempt a mid-speech Irish exit—only a few days after a dismal midterm outcome. Trump had already been blamed by many in the G.O.P. for putting his thumb on the scale for a half-dozen oddball or extremist gubernatorial and midterm candidates, including Dr. Oz and Herschel Walker, among others, who likely cost Republicans the Senate. In the days and weeks afterward, Trump spent the bulk of his time holed up in Mar-a-Lago, shit-posting about stolen elections and imagined enemies, his own mounting legal headaches, and the gall of would-be primary challengers.”

“That Trump closed out this second week on the trail bunkered down in Mar-a-Lago with Ye has only punctuated the growing fear among allies and insiders that the ex-president, in the throes of his post-Twitter and post-double-impeachment woes, cares far more about his own personal relevance than his party (duh) or even his own potential victory.”

Said a GOP strategist: “Set aside the Fuentes thing. He is a relatively obscure figure, despite the attempts of the press to make him a household name. But Kanye alone—what are you doing? Why are you having dinner with him? What’s the upside here? We know the downside. He’s mentally disturbed. And if the answer is oh, he’s my friend and I’m trying to give him some tough love and advice, that’s fine. You can do that over the phone.”

“Legislation to overhaul how Congress counts presidential electoral votes should hop on the must-pass spending omnibus on its way out of the Senate, Sens. Joe Manchin and Amy Klobuchar said Wednesday,” Roll Call reports.

Molly Ball: “When I interviewed Pelosi, Hoyer and Clyburn in 2019 for my book, Clyburn was the only one to predict that all three of them would leave at once. Now he’s the only one trying to stay in leadership.”

Rep. Bennie Thompson (D-MS) told CNN there is a “good possibility” the House select committee investigating the Jan. 6, 2021, insurrection will publish its final report by Christmas.

House January 6 Committee members “are scheduled to have a key meeting on Friday to discuss its final report as well as the possibility of making criminal referrals,” CNN reports.

“A subcommittee of members is also expected to provide options to the full committee about a number of pressing issues including how to present evidence of possible obstruction, possible perjury and possible witness tampering as well as potential criminal referrals to the Department of Justice.”

“The Justice Department has subpoenaed filmmaker Alex Holder in what appears to be a new avenue in its criminal investigations related to the events of Jan. 6. Holder had unique access to Donald Trump and his family for his recent documentary Unprecedented, and he was in Washington filming on Jan. 6, 2021,” Politico reports.

“Prosecutors are demanding that Holder turn over all of the raw footage that he and his colleagues recorded that day.”

“A day after a federal jury convicted two far-right extremists of leading a plot to unleash political violence to prevent the inauguration of Joe Biden, Attorney General Merrick Garland vowed that his Justice Department would continue to ‘work tirelessly’ to hold accountable those responsible for efforts to overturn the 2020 election,” the Washington Post reports.

“Well, I see good things about Hitler, also. Every human being has value that they brought to the table, especially Hitler… They did good things too. We have to stop dissing the Nazis all the time.”

Jonathan Chait: “To conceive of this episode as a mere failure to properly vet the Mar-a-Lago guest list, or even more broadly as an indictment of Trump’s leadership of the party, misapprehends its scope. The issue is that Trump has expanded the Republican coalition to the right, activating and encompassing undisguised white supremacists, who, through their entry into the two-party system, have gained newfound influence.”

“This is a dangerous and historically significant change to the American political scene. And hardly anybody in the GOP — certainly not Ron DeSantis — intends to reverse it.”

REPORTER: A lot of people will be wondering: Are you two meeting just because you’re similar in age and have got a lot of common stuff there — when you got into politics and stuff — or can Kiwis actually expect to see more deals between our two countries down the line?

ARDERN: My first question is I wonder whether or not anyone every asked Barack Obama and John Key if they met because they were of a similar age? We of course have a higher proportion of men in politics, it’s reality. Because two women meet, it’s not simply because of their gender.

MARIN: We are meeting because we are prime ministers, of course.

“Iran’s supreme leader on Saturday urged a unit of the country’s plainclothes militia to step up action against protesters, in remarks that could escalate a crackdown on months-long anti-regime unrest,” Bloomberg reports.

“Islamic State militant leader Abu al-Hassan al-Hashemi al-Quraishi was killed in fighting, its spokesman said in an audio message posted on an affiliated Telegram channel, another heavy blow to a group that once struck fear across the Middle East,” Reuters reports.

Wall Street Journal: “IRS research audits in 2017 and 2019—the years that FBI leaders James Comey and Andrew McCabe were selected for those intensive exams—were random, according to an inspector general’s report released Thursday.”

“Last Friday went down in history as likely the third-best day for gun sales ever, with the FBI recording 192,749 background checks,” the Washington Examiner reports.

“Traditionally, Black Fridays are the best gun sales days of the year, and last Friday was bested by only two other recent Black Fridays, in 2017 and 2019.”

“Indiana’s Republican attorney general on Wednesday asked the state medical licensing board to discipline an Indianapolis doctor who has spoken publicly about providing an abortion to a 10-year-old rape victim who traveled from Ohio after its more-restrictive abortion law took effect,” the AP reports.

The Economist: “The cold war, in which America and the Soviet Union menaced each other with tens of thousands of nukes, was scary enough. In the new age America confronts not just Russia but also China.”

“New weapons—among them hypersonic missiles that are hard to detect and shoot down, and space and cyber weapons that threaten command-and-control systems—may unsettle the nuclear balance. Worse, decades of arms-control agreements may end by 2026. A new nuclear-arms race looms. Many think that it has already started.”

Washington Post: “China conducted more ballistic missile tests last year than the rest of the world combined and is on course to possess 1,500 nuclear weapons within the next decade, the Pentagon warns in a new assessment of Beijing’s rapidly expanding military posture.”

The game GOP-controlled Cochise County is playing in Arizona could cost Republicans a House seat.

Secretary of State Katie Hobbs is warning in filings made in her lawsuit against Cochise County that if it doesn’t certify the results by Dec. 8, the ballots from the county will not be included in the final count. That would be enough to flip the results of the House race in the AZ-06.

That would flip the results of the race for Arizona’s Sixth Congressional District, where Republican Juan Ciscomani holds a 5,232-vote lead over Democrat Kirsten Engel in unofficial results, as well as the race for state Superintendent of Public Instruction, where the Republican candidate has a narrow lead.

Said Biden: “There is a risk today that we must discuss among friends. The risk is that, in the face of the challenges I mentioned, the U.S. looks first to the U.S., which is normal — we do the same.”

But he added: “The choices made, whose goals I share — especially the IRA or the Chips Act — are choices that will fragment the West because they create such differences between the U.S. and Europe.”

“With a fractured Republican party readying to take the reins in the House of Representatives, the White House is doing something it resisted early in office: taking on the more extreme members of the opposition party,” Politico reports.

“Over the past few months, President Joe Biden and top aides have become much more inclined to call out Republicans they consider radical by name, in hopes of tarring the GOP writ large and further dividing the party. It’s a departure from their first year in office, when it was an informal administration policy not to mention some of those very Republican members out of a belief that there was less of a need to fight with ‘bit players,’ as one Biden ally put it.”