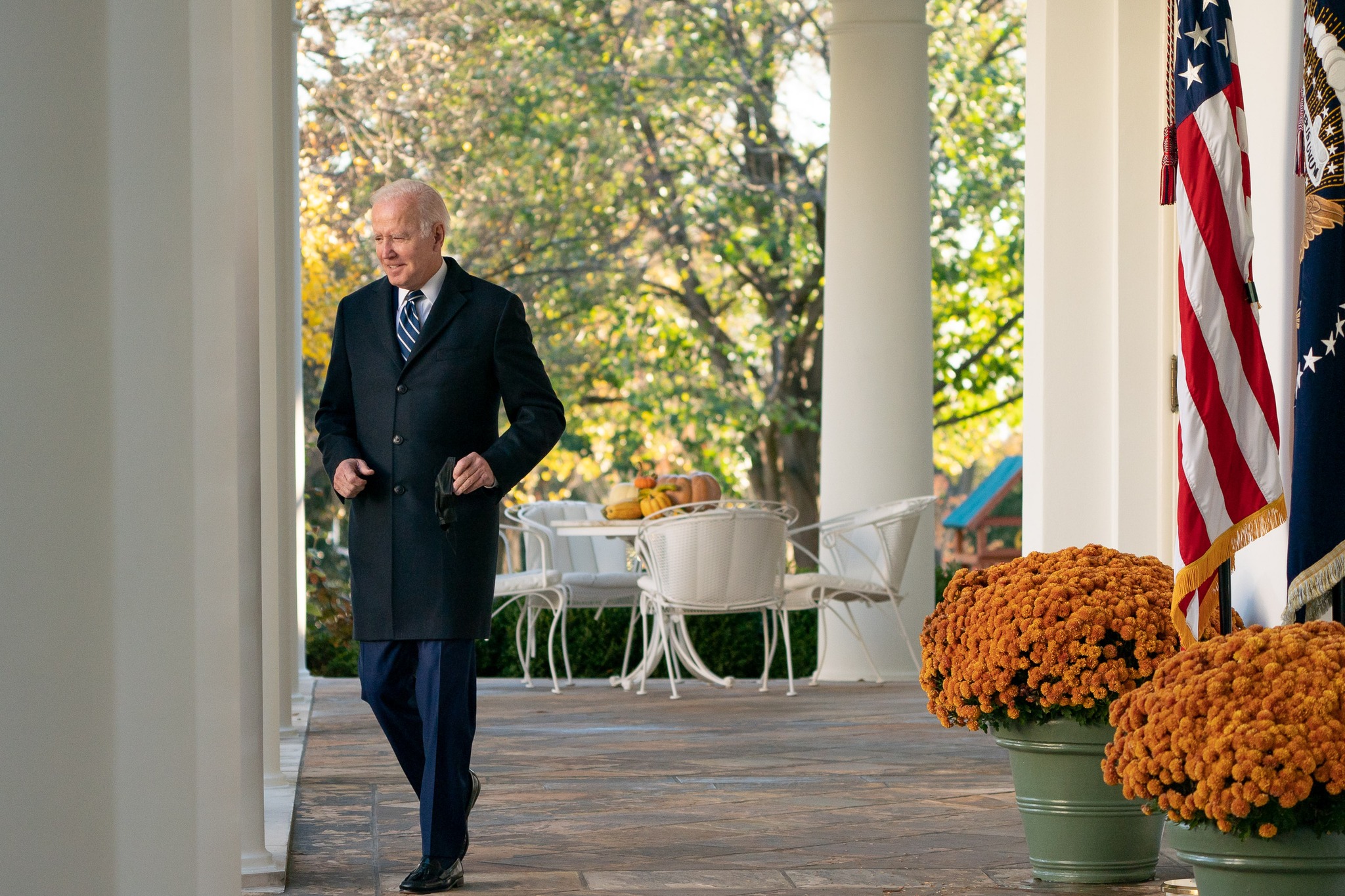 “Sen. Joe Manchin’s (D-W.Va.) side deal with Senate Majority Leader Charles Schumer (D-N.Y.) to enact permitting reform before the end of the year is on life support as Republicans look to deprive the lawmaker of a major victory that could aid his potential 2024 reelection,” The Hill reports.  “Manchin is in discussions with GOP colleagues about striking a deal on permitting reform in the lame-duck session, but Republicans say it faces an uphill path as they view his West Virginia Senate seat as a top pickup opportunity in the next election.”

“Sen. Chris Murphy (D-CT), a leading advocate for gun control in the Senate, expressed doubt on Sunday that an assault weapons ban once again being pushed by President Biden after the country’s latest mass shooting could pass the upper chamber,” The Hill reports.

Associated Press: “A weapons ban is far off in a closely divided Congress. But Biden and the Democrats have become increasingly emboldened in pushing for stronger gun controls — and doing so with no clear electoral consequences.”

Associated Press: “Bundled up against the cold, everyone then troops out of the dark, unheated theater, barely lit with emergency generators. They head back to the hard realities of Ukraine’s capital — a once comfortably livable city of 3 million, now beginning a winter increasingly shorn of power and sometimes water, too, by Russian bombardments.”

“But hope, resilience and defiance? Kyiv has all those in abundance. And perhaps more so now than at any time since Russia invaded Ukraine nine months ago.”

New York Times: “Now, nine months into the war, the West’s fundamental unpreparedness has set off a mad scramble to supply Ukraine with what it needs while also replenishing NATO stockpiles. As both sides burn through weaponry and ammunition at a pace not seen since World War II, the competition to keep arsenals flush has become a critical front that could prove decisive to Ukraine’s effort.”

“Rep. Mike Turner (R-OH) on Sunday said Congress does not need to pass ‘Democrat bills’ with big price tags to help Ukraine, saying the incoming Republican majority in the House will spend less money to fund Kyiv’s war against Russia,” The Hill reports.

Said Turner: “We don’t need to pass $40 billion, large Democrat bills … to send $8 billion dollars to Ukraine. It’s been very frustrating, obviously, even to the Ukrainians, when they hear these large numbers in the United States as the result of the burgeoned Democrat bills.”

Russia is firing ageing cruise missiles stripped of their nuclear warheads at Ukrainian targets because Vladimir Putin’s stocks are so depleted, the Guardian reports.

An intelligence update from Britain said the desperate improvisation by the Russian president’s struggling forces are “unlikely to achieve reliable effects.”

Belarus Foreign Minister Vladimir Makei “died suddenly” on Saturday but few other details were made available, the Washington Post reports.

Washington Post: “Recent figures show the [Russian economic] situation has worsened considerably since the summer when, buoyed by a steady stream of oil and gas revenue, the Russian economy seemed to stabilize.”

After Donald Trump met with Kanye West and white nationalist Nick Fuentes, his former ambassador to Israel, David Friedman, sent him a pointed message telling the former president: “You’re better than this.”

He added: “I urge you to throw those bums out, disavow them and relegate them to the dustbin of history where they belong.”

John Bolton described Donald Trump’s act as “old and tired” and said the Republican party is ready to move on to a “fresh face,” the Guardian reports.

Said Bolton: “There are a lot of reasons to be against Trump being the nominee but the one I’m hearing now as I call around the country, talking to my supporters and others about what happened on 8 November, is the number of people who have just switched Trump off in their brain.”

“The greatest danger in American politics is not recognizing that there are great dangers. The same people in 2015 and 2016 were confidently asserting Donald Trump could never, ever under any circumstances win the Republican nomination, and there were never any circumstances where Donald Trump could beat Hillary Clinton… I know that the Republicans who right now are acting very bold and the donors who are acting very frisky – as Trump starts winning primaries, they will bend the knee, they will break, they will fall, they will all come back into line.”

Wall Street Journal: “Resignations are typical in any Congress, and at least one House lawmaker has died during every two-year legislative session of Congress during the past two decades.”

“In 2022 alone, Reps. Jim Hagedorn, Don Young and Jackie Walorski died in office. Six other House members resigned, including to take other politically appointed positions. Since 1997, 37 House elected lawmakers have died either in or before taking office.”

“In one instance, Republicans won a slim majority of just one seat in the 1930 elections. But before the 72nd Congress could convene, 14 elected members died, according to House archives. Special elections held to replace them flipped the chamber in Democrats’ favor.”

“Authorities in China’s western Xinjiang region opened up some neighborhoods in the capital of Urumqi on Saturday after residents held extraordinary late-night demonstrations against the city’s draconian ‘zero-Covid’ lockdown that had lasted more than three months,” the AP reports.

“The displays of public defiance were fanned by anger over a fire in an apartment compound that had killed 10, according to the official death toll, as emergency workers took three hours to extinguish the blaze — a delay many attributed to obstacles caused by anti-virus measures.”

“But economists warn the moves so far haven’t amounted to a broad shift in Mr. Xi’s policies, and the messaging out of the recent Communist Party Congress only reinforced that the Chinese leader planned to stick to his goals of achieving economic self-sufficiency and ‘common prosperity’—even at the cost of lower growth rates.”

“While China’s economy is expected to recover somewhat in 2023 after a major slump this year, most economists doubt it will return to the heady expansion of prepandemic days soon, if ever.”

“The Biden administration on Saturday eased some oil sanctions on Venezuela in an effort to support newly restarted negotiations between President Nicolás Maduro’s government and its opposition,” the AP reports.

“The Treasury Department is allowing Chevron to resume ‘limited’ energy production in Venezuela after years of sanctions that have dramatically curtailed oil and gas profits that have flowed to Maduro’s government.”

“How Ms. Raimondo handles that task will have big implications for the United States economy going forward. Many view the effort as the best — and only — bet for the United States to position itself in industries of the future, like artificial intelligence and supercomputing, and ensure that the country has a secure supply of the chips necessary for national security.”

“But the risks are similarly huge. Critics of the Biden administration’s plans have noted that the federal government may not be the best judge of which technologies to back. They have warned that if the administration gets it wrong, the United States may surrender its leadership in key technologies for good.”

“Over the past few days, Iran has told international inspectors that it plans to begin making near bomb-grade nuclear fuel deep inside a mountain that is hard to bomb, and dramatically expand its nuclear fuel production at a plant that Israel and the United States have repeatedly sabotaged,” the New York Times reports.

At the White House, national security meetings on Iran are devoted less to negotiation strategy and more to how to undermine Iran’s nuclear plans, provide communications gear to protesters and interrupt the country’s supply chain of weapons to Russia.”

“Federal Reserve staff economists briefed policymakers this month that the chances of a US recession in the next year had risen to almost 50% on risks of slower consumer spending, global economic risks and further interest-rate hikes,” Bloomberg reports.

Wall Street Journal: “Most Federal Reserve officials thought they should slow the pace of interest-rate increases after approving a 0.75-percentage-point rate rise at their meeting earlier this month to battle high inflation.”

After months of court battles, Sen. Lindsey Graham’s (R-SC) office said in a statement that he spent just over two hours with the special grand jury in Fulton County, Georgia and “answered all questions,” the AP reports.

The statement added: “The senator feels he was treated with respect, professionalism and courtesy.”

“The Taliban lashed three women and nine men in front of hundreds of spectators in a provincial sports stadium Wednesday, signaling the religious extremist group’s resumption of a brutal form of punishment that was a hallmark of their rule in the 1990s,” the AP reports.

Associated Press: “Since his election loss, Bolsonaro has only addressed the nation twice, to say that the protests are legitimate and encourage them to continue, as long as they don’t prevent people from coming and going.”

“Bolsonaro has not disavowed the recent emergence of violence, either. He has, however, challenged the election results — which the electoral authority’s president said appears aimed at stoking protests.”

The Guardian: “As the final report is currently drafted, an overwhelming focus is on the findings of the ‘gold team’ that has been examining Trump and White House advisers’ roles in orchestrating a multi-part strategy to overturn the 2020 election.”

“The move to home in on Trump, principally driven by the select committee’s vice-chair, Republican congresswoman Liz Cheney, was in part because the actions of the former president – which a federal judge has said probably violated several criminal statutes – were particularly compelling.”