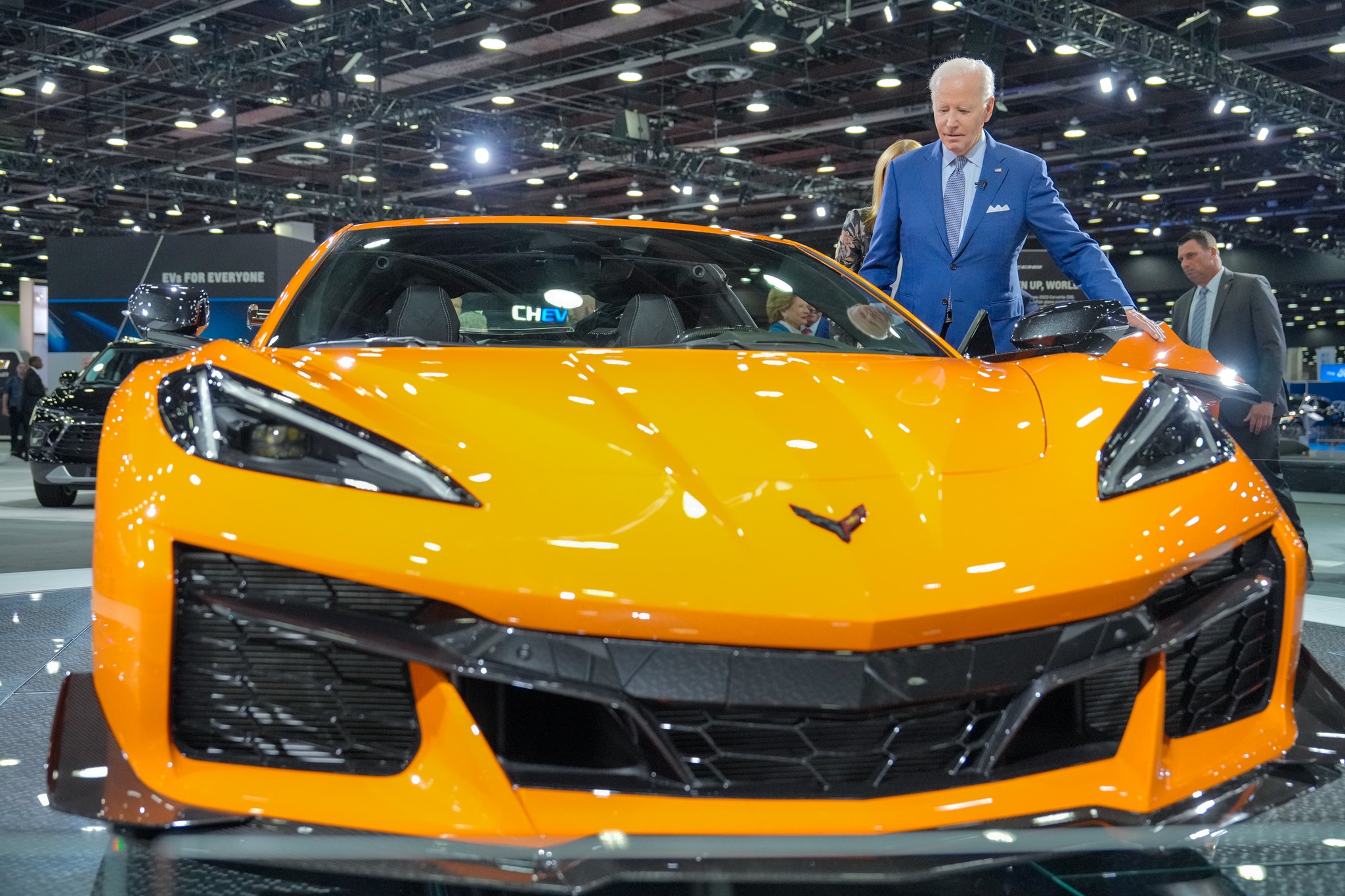 “Young people turned out in droves during the 2022 midterm elections — but not for Republicans,” USA Today reports.

“Young voters had the second-highest level of youth participation in at least 30 years… Some 63% of young voters cast ballots for Democrats in House races, with young voters of color voting blue at even greater rates.”

“And in key Senate races like Nevada and Georgia, youth voters narrowed margins and decided outcomes, dramatically swinging in favor of Democratic candidates.”

Associated Press: “Voters deciding to split their tickets or buck their party altogether may have helped Democrats mount a stronger-than-expected performance in the midterm elections.”

“AP VoteCast, an extensive survey of this year’s electorate, underscores how voters were selective in their choices in spite of today’s starkly polarized political climate, often rewarding candidates seen as mainstream while rejecting those viewed as too extreme.”

Maryland Gov. Larry Hogan (R) “is hosting a series of gatherings with donors and grassroots supporters after Thanksgiving as the Republican ramps up consideration of a 2024 White House bid,” the Washington Examiner reports.

INDIANA GOVERNOR. The Indianapolis Star’s Kaitlin Lange takes a deep dive into the potential 2024 field to succeed termed-out Gov. Eric Holcomb, though one of the biggest questions looming over the race should be settled before long. Sen. Mike Braun has been talking for months about campaigning for the state’s job instead of campaigning for a second term, and he’s said he’ll announce his plans “likely by Dec. 1.”

Braun wouldn’t be the first notable Republican in the governor’s race, though, because Eric Doden, a former president of the Indiana Economic Development Corporation, kicked off his campaign all the way back in May of 2021. Doden, who has been self-funding some of his effort, says he’s already brought in more than $5 million.

Lt. Gov. Suzanne Crouch says she’ll “have an official announcement later this month or beginning of next month,” though Lange writes that unnamed GOP insiders say she’s already made up her mind to run. The story adds that a person close to Attorney General Todd Rokita says he’ll decide over the next few months what he’ll do. Lange says that Rokita has long been talked about as a possible contender for governor or to succeed Braun in the Senate (Rokita lost the 2018 primary to Braun), though more insiders believe he’ll just run for re-election.

Another Republican, former state Sen. Jim Merritt, is talking about running for governor, though he acknowledged he’d be going up against a well-funded group of foes. Merritt was the GOP nominee for mayor of Indianapolis in 2019 and lost 72-27 to Democratic incumbent Joe Hogsett. Lange also mentions retiring Rep. Trey Hollingsworth, who didn’t respond to her questions, though she notes that “insiders say he hasn’t done much recently to prepare for a campaign.”

Finally, there’s been chatter that former Gov. Mitch Daniels, who left office in 2013 and will step down as president of Perdue University on New Year’s Day, could try to regain his old job. Two former Daniels aides formed a PAC in August to encourage him to run, and the former governor refused to rule anything out when asked. Daniels instead told Politico’s Adam Wren over the summer, “I haven’t said anything. I don’t comment on things I haven’t thought about.” Wren followed up, “I’m giving you a chance to think about it right now,” but Daniels merely laughed and added, “No, I don’t have anything to say about it.”

Democrats have considerably fewer options in this red state, though former Indiana Superintendent of Public Instruction Jennifer McCormick, a former Republican who switched parties last year, said earlier this month that she was forming an exploratory committee. Hammond Mayor Thomas McDermott, who lost to GOP Sen. Todd Young 59-38 this month, said, “I’ll be honest with you, ever since I first got involved in elected office, I’ve always aspired to be the governor … That doesn’t mean I’m doing it, but it’s something that’s always interested me.” McDermott is up for re-election to his current post next year, though he could run for both.

Former state Rep. Christina Hale, who lost a competitive 2020 bid to Republican Victoria Spartz in the 5th District, also didn’t dismiss the idea when asked. Hale, who now serves as an official in the U.S. Small Business Administration, told Lange, “I’ve really enjoyed hearing from a number of people around the state asking about my plans and ideas as well as sharing some of their own, too.”

PHILADELPHIA MAYOR. State Rep. Amen Brown is not ruling out entering May’s busy Democratic primary to succeed termed-out incumbent Jim Kenney, and the Philadelphia Inquirer writes that his ally, prominent developer Marty Burger, has predicted he’d have $5 million in super PAC support. Some of Brown’s fellow Democrats, though, may be far from keen to see him run.

Reporter Chris Brennan wrote earlier this year that the state representative, who was first elected in 2020, has “angered progressives as a rookie by introducing legislation for new mandatory-minimum jail sentences for some gun crimes.” Brown has also been sued for deed fraud, while he’s maintained that he was the victim of a Craigslist scam.

Brown later faced a difficult primary fight following redistricting against Cassandra Green, who had endorsements from District Attorney Larry Krasner and City Councilmember Helen Gym, a likely candidate for mayor. A trio of voters tried to get the incumbent thrown off the ballot for failing to meet residence requirements and not disclosing mandatory information about his finances, but a court ruled that Brown could remain listed because he “merely committed a mistake resulting from the lackadaisical attitude he routinely displays toward serious matters.”

Brown, who had the support of a super PAC funded by conservative mega donor Jeff Yass, ended up prevailing 40-38. The state representative now says that, while “many people have reached out to me about my political aspirations and future in government and city politics,” Yass isn’t one of them. Brown caused a stir later in the summer when he was photographed schmoozing with GOP Senate nominee Mehmet Oz at a restaurant. The Democrat insisted he didn’t know Oz would be there and accused Gym, who was eating at the same establishment, of taking the photos.

WEST VIRGINIA 02. State Treasurer Riley Moore, who hails from one of the most prominent Republican families in the state, announced Monday that he’d run to succeed Rep. Alex Mooney, a fellow Republican who is giving up this safely red seat in order to challenge Democratic Sen. Joe Manchin. Moore is the grandson of the late Gov. Arch Moore, while his aunt is Sen. Shelley Moore Capito. The younger Moore, for his part, lost re-election to the state House in 2018 but rebounded two years later by unseating longtime Democratic Treasurer John Perdue 56-44.

Moore is the first notable Republican to kick off a bid for what, thanks to Mooney’s early Senate kickoff last week, is currently the only House race in all of America where the incumbent has already said they won’t be running for re-election in 2024; Illinois Rep. Chuy Garcia is campaigning in next year’s race for mayor of Chicago, but he’d be able to turn around and seek another term in the House should it fail. West Virginia’s 2nd District, which is based in the eastern and northern portions of the state, backed Trump 68-31.

There are numerous other Mountain State Republicans who could join in, though another statewide elected official is sending mixed signals about his interest. Attorney General Patrick Morrissey, who lost to Democratic Sen. Joe Manchin in 2018, quickly responded to Mooney’s launch by saying he was eyeing the 2nd District in addition to a rematch with Manchin, a bid for governor, and re-election. Morrissey again said days later he was “seriously evaluating a run for the U.S. Senate and governor,” but this time, he didn’t mention the House as a possibility.

Moore has earned the backing of the congressman he hopes to succeed, Senate candidate Alex Mooney, ahead of the 2024 Republican primary for this safely red seat.

LOUISIANA GOVERNOR. Republican Bill Cassidy said Friday that he would remain in the Senate rather than enter next year’s all-party primary for governor. His colleague, Sen. John Kennedy, recently expressed interest in his own campaign, and a Cassidy-Kennedy matchup may have marked the first time in American history that two sitting U.S. senators ran against each other for governor.

Another prospective GOP candidate, state Sen. Sharon Hewitt, said last week, “I think we’ll probably be in a position to make a decision in January.”

TEXAS U.S. SENATOR. Republican incumbent Ted Cruz confirmed that he’d seek a third term in 2024, though he didn’t rule out campaigning for president at the same time.

Cruz would be able to simultaneously seek both posts thanks to the machinations of none other than Lyndon Johnson, who convinced the state legislature in 1959 to pass what was nicknamed the “LBJ Law” ahead of the majority leader’s planned White House campaign. Johnson was indeed on the ballot the following year for Senate and on the national party ticket, though only as John F. Kennedy’s running mate.

MAINE U.S. SENATOR. The Bangor Daily News says that Sen. Angus King, an independent who caucuses with the Democrats, will announce sometime next month if he’ll seek a third term.