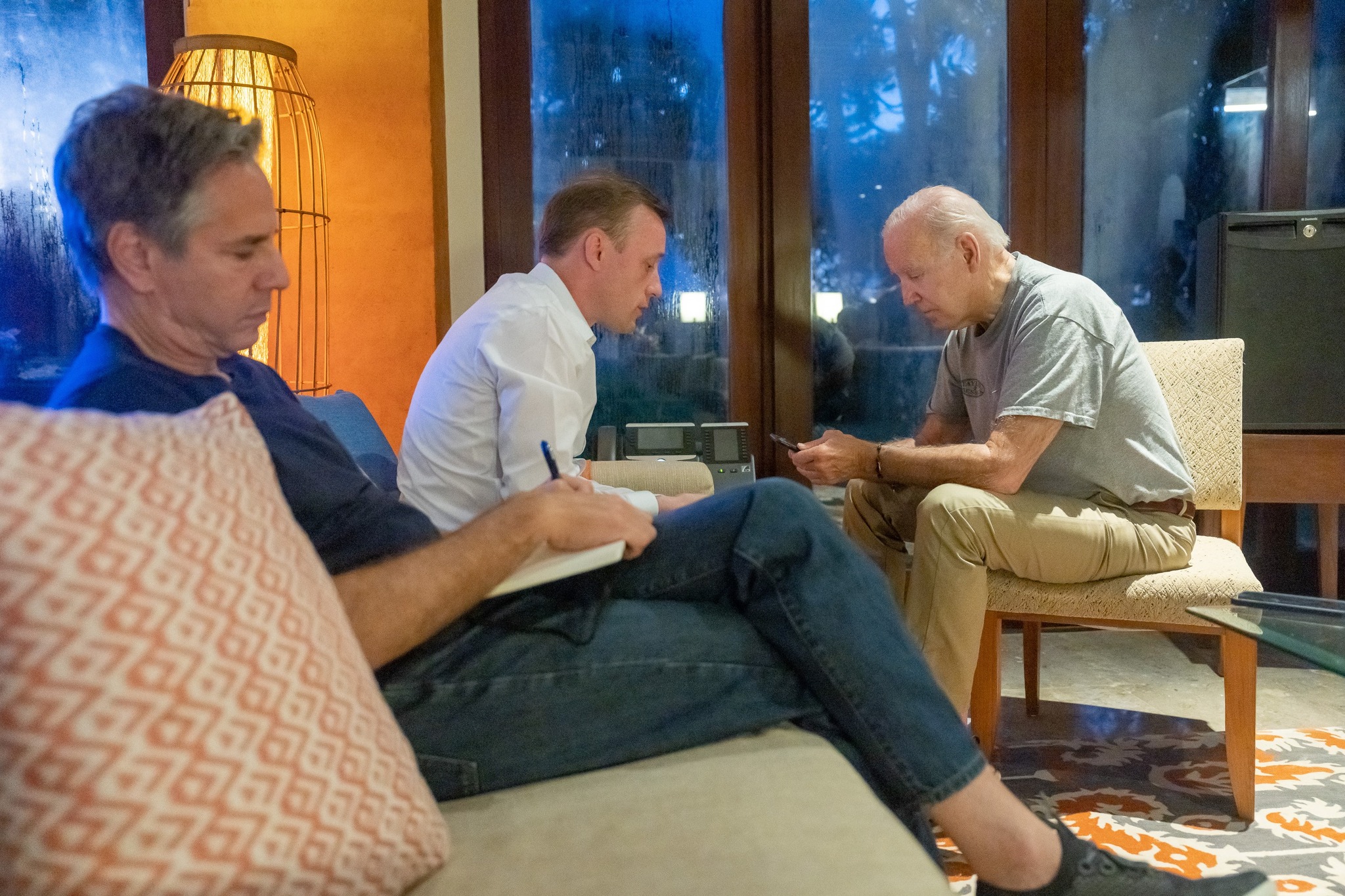 “Republicans won enough seats during midterm elections to capture a slim majority in the House, but their ability to advance their agenda will face both practical and ideological challenges tied to such a historically small margin,” the Wall Street Journal reports.

“With little wiggle room, party leaders will need the support of nearly every Republican to propel partisan legislation, giving each member more leverage to alter or block proposals. The slim majority could complicate leaders’ efforts to reach deals on ‘must pass’ bills funding the government, addressing the debt limit or setting farm and military policies in cooperation with the Democratic-controlled Senate.”

“President Biden on Thursday said he would try to pass a bill banning assault rifles during the lame-duck session before the next Congress forms, despite long odds due to Republican opposition,” The Hill reports.

“Biden spoke to reporters Thanksgiving morning, coming after a week that saw three mass shootings in the U.S.”

“Lawmakers, agriculture groups and farmworker organizations are pushing to pass an overhaul of the farmworker visa program through both chambers of Congress before the GOP takes control of the House next year,” the Wall Street Journal reports.

The Economist: “Mr Putin’s war is turning Russia into a failed state, with uncontrolled borders, private military formations, a fleeing population, moral decay and the possibility of civil conflict. And though confidence among Western leaders in Ukraine’s ability to withstand Mr Putin’s terror has gone up, there is growing concern about Russia’s own ability to survive the war. It could become ungovernable and descend into chaos.”

Meanwhile, the Wall Street Journal reports that Russia’s munitions shortage raise questions of how long it can continue the war in Ukraine.

“After just six weeks of intense bombing of energy infrastructure, Russia has battered Ukraine to the brink of a humanitarian disaster this winter as millions of people potentially face life-threatening conditions without electricity, heat or running water,” the Washington Post reports.

“As the scope of damage to Ukraine’s energy systems has come into focus in recent days, Ukrainian and Western officials have begun sounding the alarm but are also realizing they have limited recourse. Ukraine’s Soviet-era power system cannot be fixed quickly or easily.”

Pope Francis compared the war in Ukraine to the “terrible Holodomor genocide” of the 1930s, when the policies of the Soviet dictator, Joseph Stalin, caused a devastating famine in Ukraine, the New York Times reports.

Associated Press: “A barrage of missiles struck the recently liberated city of Kherson for the second day Friday in a marked escalation of attacks since Russia withdrew from the city two weeks ago.”

“The city was shelled 17 times before midday Thursday, and strikes continued into the evening, killing at least four people and injuring 10, according to Kherson’s military administration. Soldiers in the region had warned that Kherson would face intensified strikes as Russian troops dig in across the Dnieper River.”

“Since Rep. Liz Cheney accepted House Speaker Nancy Pelosi’s offer to serve as the vice chair of the House committee investigating the Jan. 6, 2021, attack on the U.S. Capitol, the Wyoming Republican has exerted a remarkable level of control over much of the committee’s public and private work,” the Washington Post reports.

“Now, less than six weeks before the conclusion of the committee’s work, Cheney’s influence over the committee’s final report has rankled many current and former committee staff. They are angered and disillusioned by Cheney’s push to focus the report primarily on former president Donald Trump, and have bristled at the committee morphing into what they have come to view as the vehicle for the outgoing Wyoming lawmaker’s political future.”

“With Sen. Patty Murray (D-Wash.) planning to vacate the No. 3 leadership slot, the Senate majority leader is suggesting eliminating the position of assistant leader from the caucus’ hierarchy. He also is creating a new role titled deputy conference secretary.”

“While tens of thousands of supporters of President Jair Bolsonaro camp outside military facilities across Brazil to protest his election loss, members of Bolsonaro’s inner circle are meeting with advisers to former president Donald Trump to discuss next steps,” the Washington Post reports.

“That movement is facing a reckoning not unlike that of the American right after Trump’s 2020 loss over how to sustain itself when its charismatic standard-bearer has been defeated.”

“The head of Brazil’s electoral authority on Wednesday rejected the request from President Jair Bolsonaro and his political party to annul ballots cast on most electronic voting machines, which would have overturned the Oct. 30 election,” the AP reports.

“The Biden administration is grappling with how to deal with a new Israeli government that will be the most right-wing in that country’s history and may stand in the way of core U.S. goals for the Middle East,” the Los Angeles Times reports.

“The new government will be led by Benjamin Netanyahu, Israel’s longest serving prime minister, who was ousted from the job just a year ago and is on trial for corruption. To regain the position, Netanyahu formed an alliance with controversial political figures known for their extreme anti-Arab views, likely dooming any peace deal with Palestinians.”

“Carroll’s battery and defamation lawsuit filed in federal court in Manhattan accuses Trump of pinning her against a wall and then raping her inside a dressing room at Bergdorf Goodman’s on Fifth Ave. near E. 58th St. between the fall of 1995 and spring of 1996.”

“The lawsuit was among the first filed under the Adult Survivors Act, which went into effect at 12 a.m. on Thanksgiving.”

Tom Nichols: “On Thanksgiving, we tend to express our gratitude for what we already have. We roll out of bed, glad (if we’re so blessed) that we are well and that our home is intact, and then head to the dinner table for a nice meal. Millions of us will do that on Thursday, and this is as it should be.”

“But I want to challenge you to find gratitude for the disasters we’ve escaped over the past few years. This is the thankfulness not for the warm hearth or full belly, but the visceral sense of relief, to paraphrase Winston Churchill, that comes from being shot at and missed.”

“Hundreds of Chinese-manufactured drones have been detected in restricted airspace over Washington, D.C., in recent months, a trend that national security agencies fear could become a new means for foreign espionage,” Politico reports.

“The recreational drones made by Chinese company DJI, which are designed with ‘geofencing’ restrictions to keep them out of sensitive locations, are being manipulated by users with simple workarounds to fly over no-go zones around the nation’s capital.”

“Federal officials and drone industry experts have delivered classified briefings to the Senate Homeland Security, Commerce and Intelligence committees on the development.”

“As Republicans prepare to use their new House majority to probe the Biden administration and the business dealings of the president’s son Hunter, Democrats are assembling a constellation of groups to respond,” NBC News reports.

“President Joe Biden hasn’t said if he’s running for re-election, but the groups are designed to defend him and discredit the opposition — including launching intense opposition research efforts into Republicans leading the charge in Congress — ahead of a likely rematch with former President Donald Trump in 2024.”

“Three new ‘war rooms’ have sprung up in the past two weeks to combat the House Republican investigations, each backed by multimillion-dollar dark money budgets and some of the best-known operatives in the Democratic Party. Meanwhile, the Democratic National Committee and major outside groups are already retooling to shift from 2022 to 2024.”