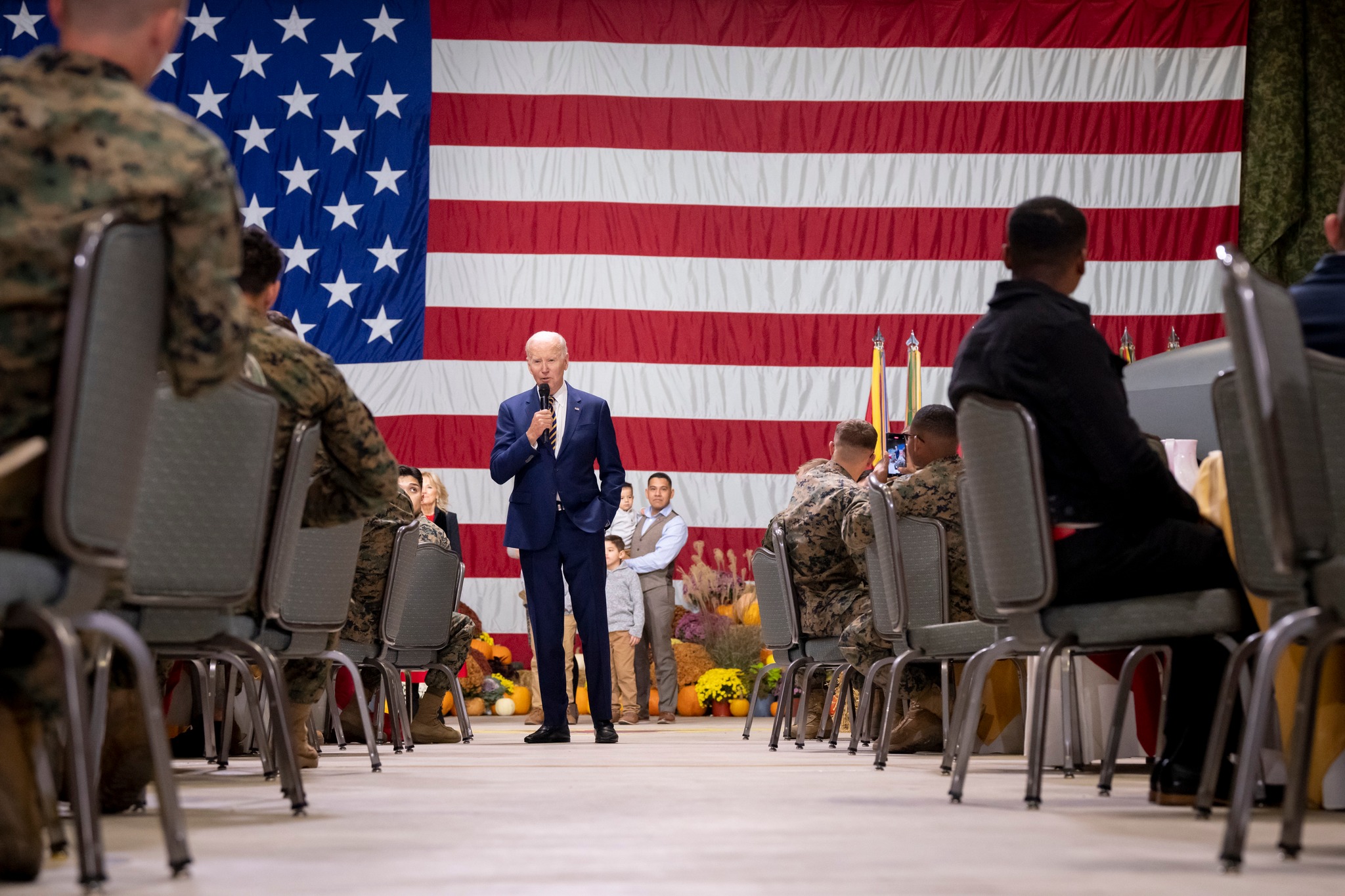 A week after Donald Trump announced a presidential bid in 2024, a new Quinnipiac poll finds that 57% of Americans think it’s a bad thing, while 34% do not.

“Voter participation in the marquee midterm battlegrounds of Georgia and Wisconsin was essentially unchanged from four years ago.”

Republican Herschel Walker launched a transphobic ad against Democratic Sen. Raphael Warnock during an airing of “Sunday Night Football,” the night after five patrons were murdered and many others were wounded at an LGBTQ bar in Colorado Springs, Colorado.

Walker’s spot features him sitting next to Riley Gaines, a collegiate swimmer who misgenders trans competitor Lia Thomas by telling the audience, “My senior year, I was forced to compete against a biological male … a man won the swimming title that belonged to a woman, and Sen. Warnock voted to let it happen.” Gaines starred in similar commercials earlier this year against Kansas Gov. Laura Kelly, a Democrat who overcame her state’s red hue to win re-election this month.

Walker and his allies at the Senate Leadership Fund are also each airing commercials claiming that Ebenezer Baptist Church, where Warnock serves as pastor, evicted low-income tenants from its apartments. Warnock’s campaign has said that a private company, rather than Ebenezer’s ​​church foundation, manages the apartments, and further insists “that there have been no evictions at the property and that Reverend Warnock has nothing to do with its day-to-day operations.”

Warnock, meanwhile, is running his own commercial featuring the return of an old friend from 2020, Alvin the beagle. As the senator walks Alvin he says of his opponent, “You’d think Herschel Walker would want to explain what he’d do in the Senate if he actually wants to represent Georgia. Instead, he repeats the same lies, trying to distract from what we all know is true about him.” Warnock, just like he did two years ago, throws a small plastic baggie of unmistakable provenance into the trash after predicting that Georgians “will see his ads for what they are,” a statement his co-star barks in agreement to before licking the senator’s face.

A different Warnock ad features the Democrat talking about the importance of character and how important it is to do “the right thing simply because it’s the right thing, and doing it over and over again.” This spot doesn’t mention Walker and his many scandals.

The second woman who claimed Herschel Walker (R) pressured her to have an abortion will hold a press conference and offer new evidence of her relationship with Walker  — including audio recordings, the Daily Beast reports.

Said Dixon: “The biggest difference between the two candidates — we’re talking about the skill sets. I feel Herschel is — he has the minimum requirement, but he does not have the criteria to be a representative to serve the people.”

AZ-AG: Garrett Archer, a data analyst for local news station ABC15, reported on Monday afternoon that all ballots statewide had finally been tallied, leaving Democrat Kris Mayes with a 510-vote lead over Republican Abraham Hamadeh in the race for Arizona attorney general. With more than 2.5 million votes cast, Mayes’ margin amounts to just 0.02%—well inside the 0.5% that triggers a mandatory recount.

Such a recount won’t take place until after Dec. 5, when results are certified. But despite the very close race, a recount is not likely to change the final outcome since, as election law expert Quinn Yeargain points out, county officials have already conducted hand-counted audits and found only minimal discrepancies.

Arizona has only ever held one recount in a statewide general election in its history, and it was a very long time ago. In 1916, not long after Arizona entered the union, Democratic Gov. George Hunt appeared to lose his bid for a second term by just 30 votes to Republican Thomas Campbell, who went on to serve as governor for almost a full year until the state Supreme Court ruled that Hunt had in fact won by 43 votes and reinstated him. Arizona was far, far smaller, then, however, as just 56,000 votes were cast in that race.

If Mayes’ victory stands up, she’ll help make history in another way, too. Axios’ Jeremy Duda notes that this will be the first time since 1978 that Arizona Democrats have simultaneously held the offices of governor, secretary of state, and attorney general. This year, all three positions were open, and since the governorship and the attorney general’s post were held by Republicans, Democratic victories in both of those races represent red-to-blue flips.

IA Auditor: State Auditor Rob Sand will be the one Democrat left in statewide office now that Republican Todd Halbur has conceded. Sand outpaced Halbur 50.1-48.9, and while the Republican initially announced he’d seek a recount, he said Friday he “lacks the resources and manpower” to pursue it. Halbur made it very clear he blamed the state party, declaring, “This leaves me with no other option than to abandon this recount effort just as the State GOP organization has abandoned my campaign.”

Sand’s 2,900-vote victory leaves him as Iowa’s most prominent Democratic elected official after this month’s midterms. Republicans won close races against a pair of 10-term incumbents, Attorney General Tom Miller and Treasurer Michael Fitzgerald, while Zach Nunn’s victory against Rep. Cindy Axne means that Iowa will send an all-GOP delegation to both chambers of Congress for the first time since the 1950s.

CO-03: Democrat Adam Frisch said Friday that he was conceding to far-right Rep. Lauren Boebert even though an automatic recount will still take place next month after their shockingly close contest. Frisch explained, “Colorado elections are rock solid and if historical precedent of recounts in the state holds, it is unlikely to change more than a handful of votes … So rather than continue with a narrative that the recount could alter the fact that we came up 554 votes short, we are choosing to move forward with honesty & humility.”

Frisch told The Pueblo Chieftain afterwards that he wasn’t ruling out seeking a rematch in 2024 after his 50.1-49.9 defeat in a western Colorado seat Trump took 53-45 two years before.

CA-34: Rep. Jimmy Gomez has won a tight rematch against his fellow Democrat, David Kim, 51-49 with most of the vote counted. Gomez two years ago fended off Kim, a former prosecutor who had not generated much attention, only 53-47, and the incumbent was determined not to get surprised for 2022. While Kim once again campaigned as an ardent progressive in this safely blue seat in downtown Los Angeles, Gomez sent out mailers declaring the challenger was running “with QAnon-MAGA support.”

Gomez’ campaign argued this attack is fair because Kim in 2020 received the backing of Republican Joanne Wright, a QAnon conspiracy theorist who failed to advance out of that top-two primary. The congressman’s team said that Wright’s beliefs were already public back then, while Kim declared that Gomez was misleadingly making it sound like he’s gotten support from QAnon acolytes for 2022.

CA-22: Incumbent David Valadao has turned back Democratic Assemblyman Rudy Salas 52-48 with almost all of the vote counted; Biden took this Central Valley seat 55-42, but Team Blue often struggles with midterm turnout in this region. Valadao and Washington Rep. Dan Newhouse are the only House Republicans who will be going back to Congress after voting to impeach Trump in 2021.

Alameda County, CA District Attorney: Civil rights attorney Pamela Price, a progressive who initially trailed for days after election night, has defeated prosecutor Terry Wiley 53-47 in the officially nonpartisan race to succeed Wiley’s boss and ally, retiring incumbent Nancy O’Malley. Price, who ran as a criminal justice reformer, will be the first Black person to serve as top prosecutor for this large Bay Area county, which is home to Oakland and Berkeley.

“House Democrats are already sizing up the 2024 election map, circling Republicans in districts that mostly voted for President Biden as their top early targets,” Axios reports.

“The early primer of the 2024 battleground could influence how certain House Republicans vote and comport themselves, as well as where presidential candidates spend their time and parties focus their resources.”

“Former Vice President Mike Pence is building out his political staff, the latest indication that he’s prepping a White House bid that will pit him against his former boss, ex-President Donald Trump,” Politico reports.