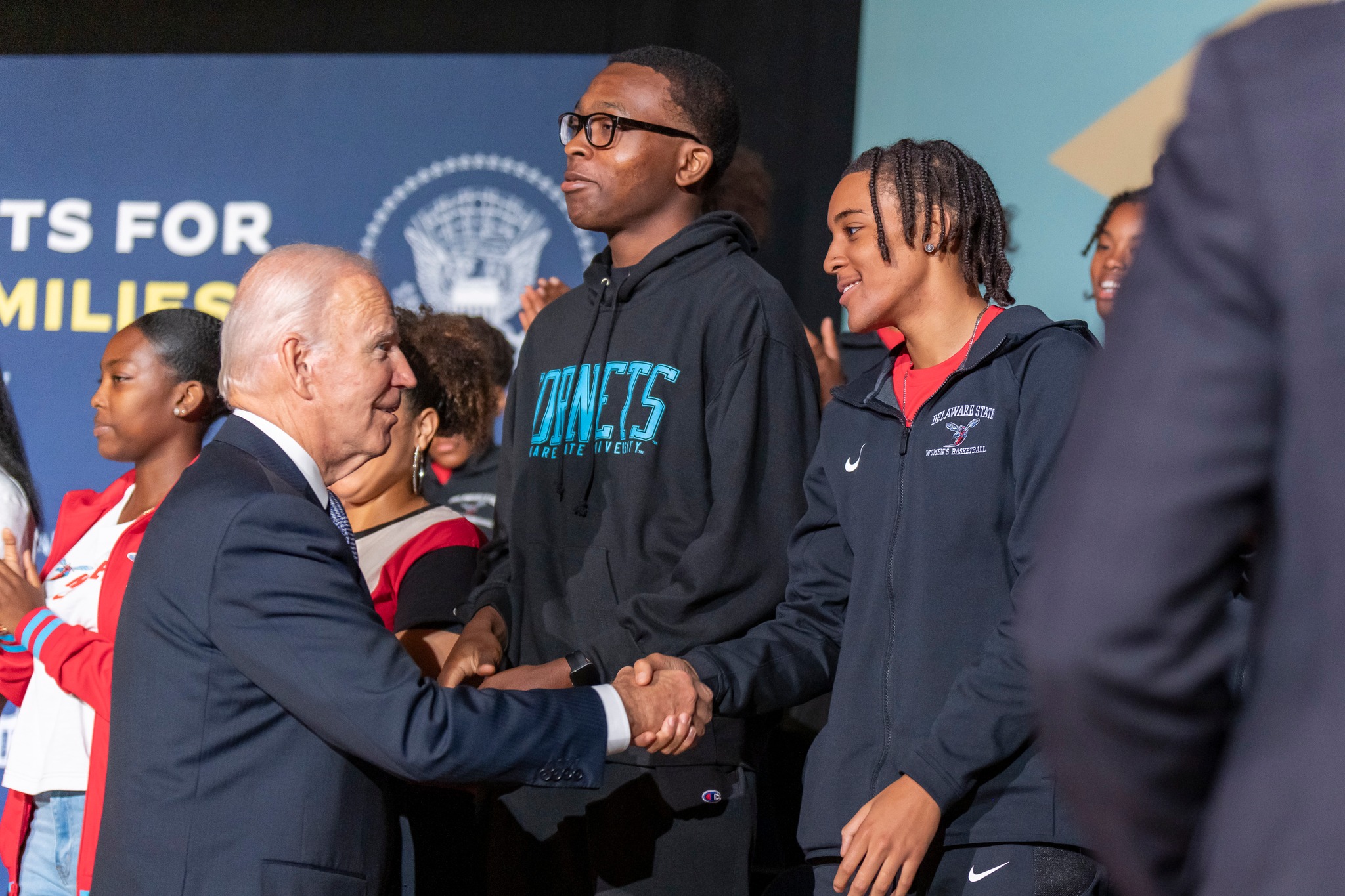 One week after the midterm elections, a new USA Today/Ipsos poll finds that Democratic voters “now have more favorable views of President Biden than they did pre-election. In contrast, while former President Trump still remains strong among Republican voters, he has lost some ground and fewer believe he can win the next presidential election.”

“Democratic voters are now more supportive of President Biden being the party’s nominee in 2024 than they were pre-election.”

“Seventy-one percent of Democratic voters believe President Biden can win the next presidential election. This is an 11-point swing from August, when three in five shared this sentiment.”

“He was not my first or second choice for president, but I am a convert. I never thought I would say this, but I believe he should run for another term and finish this agenda we laid out.” — Rep. Pramila Jayapal (D-WA), who heads the Congressional Progressive Caucus, quoted by Politico.

GA-Sen. Donald Trump is “pissed” that top Republicans are trying to dissuade him from travelling to Georgia to campaign for the party’s candidate in the Senate runoff election next month, Rolling Stone reports.

Trump has “vehemently argued to aides and confidants that his presence in the runoff would be a net positive for Walker, and he has accused pundits and Republicans who say he shouldn’t go to Georgia are unintelligent Trump haters.”

“Former President Barack Obama is returning to Atlanta for the second time this campaign season, this time to hold a rally for U.S. Sen. Raphael Warnock ahead of the Dec. 6 runoff,” the Atlanta Journal Constitution reports.

“Obama will headline a Dec. 1 event for Warnock to boost turnout in the race against Republican hopeful Herschel Walker.”

Georgia Honor, which is an affiliate of the Democratic-aligned Senate Majority PAC, announced Wednesday that it has reserved an additional $8.8 million for ads ahead of the Dec. 6 runoff, which brings its total bookings to $13.5 million for the second round. The news comes on the heels of the GOP-aligned Senate Leadership Fund announcing its own $14.2 million reservation, though unlike its Republican counterparts, Georgia Honor’s move wasn’t accompanied by public party infighting on Twitter.

Democratic Sen. Raphael Warnock, meanwhile, is airing new ads designed to appeal both to voters who selected GOP Gov. Brian Kemp earlier this month and anyone who wants to move on from the Trump era. One spot stars a woman saying that, while she was “proud” to back Kemp, “The more I heard about Herschel Walker, I became concerned about his honesty, his hypocrisy, but also just his ability to lead. I just can’t get past Herschel Walker’s lack of character.”

The other is just footage of Trump praising Walker at his Tuesday 2024 kickoff event, with on-screen text imploring the viewer to stop them both.

Arizona state Rep.-elect Liz Harris (R) said that she will not cast her vote on any bill unless the 2022 election is redone, KPNX reports.

Harris issued the statement on Instagram and her campaign website saying in part “it has become obvious that we need to hold a new election immediately.”

She alleges that there were “clear signs of foul play” which necessitated her demands. There has been no evidence of this.

Washington Post: “What is unfolding in New Hampshire is a microcosm of a closely divided country voting in tightly fought contests, as well as an illustration of the electoral system’s resilience. So far the recounts, which are open to the public, have proceeded calmly.”

“Longtime observers of the state’s politics can’t remember an election in which the state House — the largest in the country — was so evenly divided between Republicans and Democrats. The number of recounts requested by candidates, meanwhile, is among the highest ever.”

Jon Ralston: “The lessons of Election ’22 in Nevada are multifarious —candidates and campaigns have never mattered more, independents are not who we thought they were and the Republicans blew a chance that may not come again soon.”

“In a state where the president was under 40 percent in even some Democratic polls, gas prices were some of the highest in the country and inflation was soaring, the real, underlying story about this cycle is that deniers were denied. Oh, I don’t mean election deniers, although the three most dangerous (Laxalt, Michele Fiore and Jim Marchant) all lost.”

“I refer to Reid machine deniers, who were the authors of and sources for many election prebuttals — and who were proved wrong. Again.”

Associated Press: “As both parties sift through the results of Democrats’ stronger-than-expected showing in the midterm elections, Republicans are engaged in a round of finger-pointing, including a failed attempt by Florida Sen. Rick Scott, who led the Senate GOP’s campaign arm, to challenge McConnell for his leadership post.”

“But the recriminations obscure a much deeper dilemma for the party. Many of their nominees — a significant number of whom were first-time candidates who adopted far-right positions — failed to raise the money needed to mount competitive campaigns. That forced party leaders, particularly in the Senate, to make hard choices and triage resources to races where they thought they had the best chance at winning, often paying exorbitant rates to TV stations that, by law, would have been required to sell the same advertising time to candidates for far less.”

“The lackluster fundraising allowed Democrats to get their message out to voters early and unchallenged, while GOP contenders lacked the resources to do the same.”

PA State House: Democrats officially gained control of Pennsylvania’s state House on Thursday after GOP state Rep. Todd Stephens conceded to Democrat Melissa Cerrato in the 151st District, giving Democrats exactly the 102 seats they need to control the 203-member chamber. It’s unclear whether or not Democrats might gain one more final seat with the winner still not called in the 142nd District, where Republican Joseph Hogan led Democrat Mark Moffa by 53 votes, though legal challenges in that contest appear likely.

Democrats’ victory ends the GOP’s 12-year hold on Pennsylvania’s lower chamber, and it wouldn’t have been possible without the GOP’s previous gerrymander getting replaced with a much fairer map following the 2020 census.

AZ Ballot: Arizona voters by a 50.4-49.6 margin have rejected Proposition 309, which Republicans placed on the ballot to make Arizona’s existing voter ID requirement even more restrictive. The rejected measure would have disallowed alternative non-photo IDs for in-person voting and also required birthdates and voter ID numbers to vote by mail.

CA-49: Democratic Rep. Mike Levin has won his expensive rematch against Republican Brian Maryott in a seat located north of San Diego. The incumbent leads 53-47 with 98% of the Associated Press’ estimated vote in for a seat Biden took 55-43. Levin two years ago held off Maryott by that same 53-47 margin for a constituency that barely changed after redistricting; major outside groups largely bypassed the 2020 contest only to drop millions down for their second bout.

“Fresh off a commanding reelection victory in one of the nation’s premier swing states, Democratic Michigan Gov. Gretchen Whitmer says she will remain focused on her post and not growing speculation she could mount a future presidential run,” the AP reports.

In an interview, Whitmer insisted she’s “never had interest in going to D.C.” and said she’ll “be here for four more years.”

“For the first time since Gerald Ford was president, an election has turned control of the Orange County Board of Supervisors over to the Democratic Party,” the Los Angeles Times reports.

“It marks the latest shift in a county so famously conservative that former President Reagan once described it as ‘where the good Republicans go before they die.’”