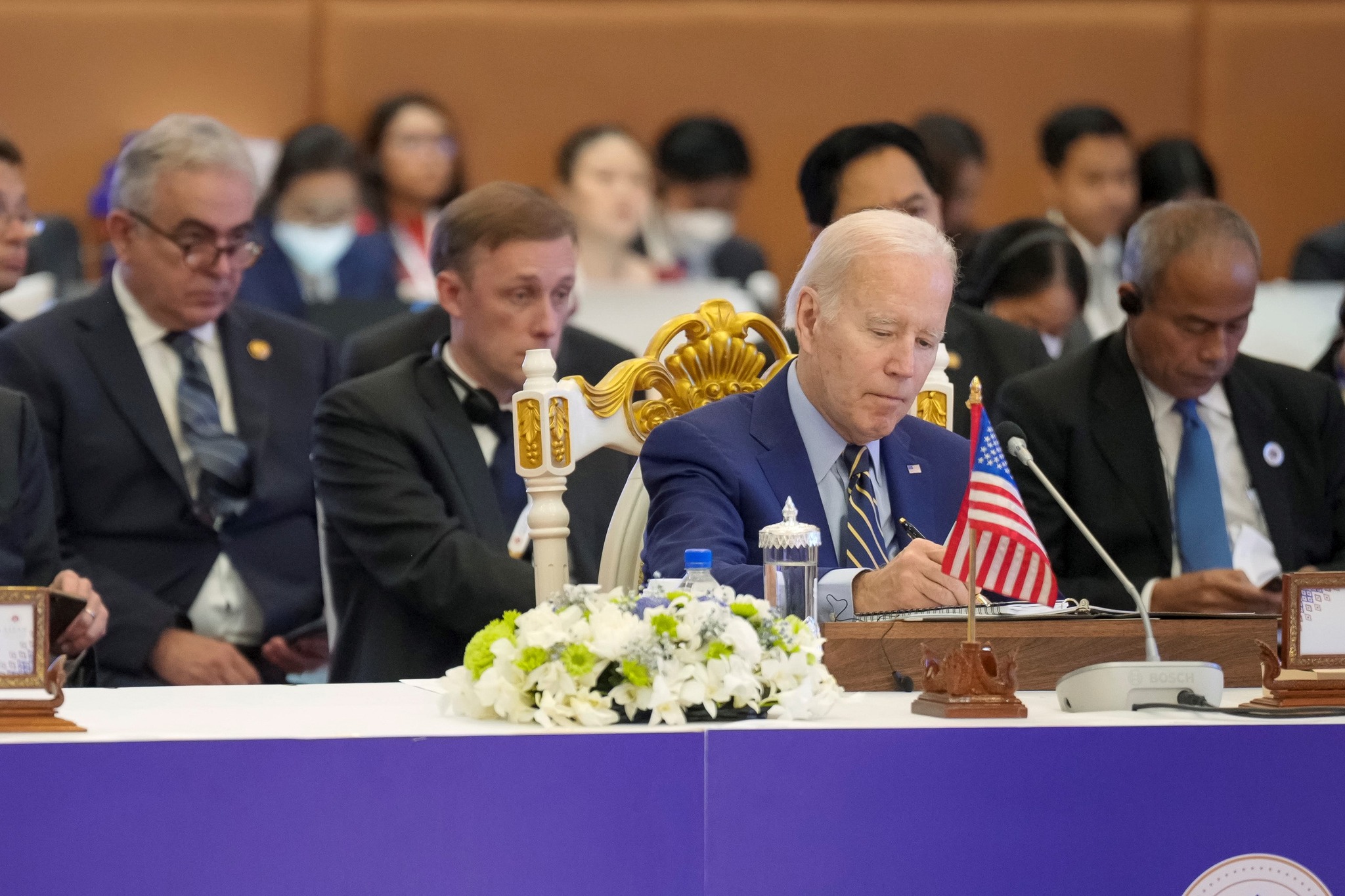 A new Club for Growth/WPA Intelligence poll conducted after the midterm elections shows Ron DeSantis leading Donald Trump by 11 percentage points in Iowa and by 15 points in New Hampshire.  The memo also says that DeSantis leads Trump by 26 points in Florida.

A new Politico/Morning Consult poll shows that 47% of Republicans and Republican-leaning independents say they would back Donald Trump if the Republican presidential primary were held today. By comparison, 33% said they would back Florida Gov. Ron DeSantis.  No other prospective candidate received above 5% in the poll, save former Vice President Mike Pence, who stood exactly at that figure.

Cook Political Report: “If every lead in the six remaining uncalled House races holds, Republicans will wind up with a 222 to 213 seat majority—an exact mirror image of the slim majority Democrats hold now.”

Cook Political Report: “It may feel like deja vu for Georgians with yet another Senate election going into overtime. But the December 6 rematch between Democratic Sen. Raphael Warnock and GOP nominee Herschel Walker now carries much less weight than the dual 2020 runoffs — which ultimately cemented Democratic control of the Senate.”

“This time around, Democrats are already guaranteed a majority of at least 50-50, but they’re looking now to defend their last vulnerable incumbent and increase their majority by one seat — a herculean task they’ve already shown they can accomplish despite historic midterm trends working against them. We are keeping this race in our Toss Up column, and ultimately the first-round finishes by both candidates, with Warnock leading Walker by 37,674 votes, underscore how close this race will be.”

Toss Up is a safe rating but with Herschel Walker having an enthusiasm issue, I’d say this race leans slightly toward Raphael Warnock.

Five states in 2022 voted on ballot measures that aimed to remove language from their state constitutions that currently still allows slavery and indentured servitude as punishment for crimes, and four out of the five passed. Much like the U.S. Constitution’s 13th Amendment, whose ban on slavery also has an exception for punishment for crime, a number of states enacted similar wording following the Civil War, and proponents hope that removing such exceptions will help eliminate forced labor in prisons.

In particular, voters this month approved amendments removing these exceptions in Alabama, where a more extensive recompiled constitution passed 77-23; Oregon, where Measure 112 prevailed 56-44; Tennessee, where Constitutional Amendment 3 won 80-20; and Vermont, where Proposal 2 succeeded 89-11.

Meanwhile in Louisiana, voters rejected Amendment 7 by 61-39 despite its unanimous passage by the GOP-run legislature. However, that outcome occurred after a Democrat who sponsored the amendment later came out against it, saying that a drafting error in the amendment’s language could have unintentionally expanded the exceptions to the ban on slavery and involuntary servitude, so lawmakers may try again with different wording in the future.

Philadelphia, PA District Attorney: The Republican-dominated state House voted Wednesday to impeach Philadelphia District Attorney Larry Krasner, who is one of the most prominent criminal justice reformers in the country, a move his fellow Democrats denounced as a power grab.  The state Senate will hold a trial at an unannounced later date, and it would take two-thirds of the upper chamber’s members to remove Krasner.

Republicans and an allied independent, John Yudichak, together hold 29 of the 50 seats, so they’d need to win over at least five Democrats to get the requisite 34 votes to oust the district attorney. No House Democrats, though, supported impeachment, while Republican state Rep. Michael Puskaric gave it the thumbs down. It’s possible the trial could take place after new members are sworn in for January but, because Democrats netted a seat last week, that would only make the math harder for Krasner’s detractors.

Republicans argued that, while the legislature hasn’t impeached anyone in nearly three decades, it was necessary to remove Krasner. “Lives have been lost, property has been destroyed and families have been crushed,” said the resolution, which argued that the district attorney had mismanaged his office and pushed policies that led to more unrest. Krasner, who was re-elected last year, responded that the GOP hasn’t provided “a shred of evidence” that he was at fault for a national rise in crime and that “history will harshly judge this anti-democratic authoritarian effort to erase Philly’s votes.”

Law professor Bruce Ledewitz also told the Philadelphia Inquirer, “There is very little likelihood here that there’s a legally sufficient basis for impeachment and removal.” Ledewitz noted that, even if Krasner is convicted by the state Senate, the courts have the power to intervene if they don’t feel his removal meets the standards required for impeachment.

Six states voted this month on whether to approve ballot measures that would either legalize marijuana or decriminalize other drugs, three of which were approved while three others were rejected.

In Maryland, voters approved legalizing marijuana by passing Question 4 by a 66-33 margin after Democratic lawmakers placed it on the ballot, and voters in Missouri did the same by passing voter-initiated Amendment 3 by a 53-47 spread. However, voters rejected marijuana legalization ballot initiatives in Arkansas by defeating Issue 4 by 56-44, North Dakota by voting down Statutory Measure 1 by 55-45, and South Dakota by opposing Initiated Measure 27 by 53-47.

Meanwhile in Colorado, which along with Washington was one of the first two states to legalize recreational marijuana back in 2012, voters this month passed Proposition 122 by 54-46 to decriminalize certain psychedelic plants and fungi such as psilocybin mushrooms and regulate their sale for therapeutic uses. Colorado is now the second state to decriminalize and regulate psilocybin mushrooms after Oregon voters did so in 2020.

Hansen, a Democrat who has served in the legislature since 2017, touted himself as a progressive, though he acknowledged that he wasn’t the most progressive contender in the running. “I think on the political spectrum, there are definitely some candidates already in the race who are well to my left, so to speak,” the state senator told 9News’ Marshall Zelinger, though he didn’t name any rival in particular.

The packed field already includes two other Democratic elected officials: Debbie Ortega, who won a spot on the City Council all the way back in 1987 and has held an at-large seat since 2011, and state Rep. Leslie Herod, whose 2016 victory made her the first gay Black woman to serve in the legislature.

Also in the running are former Denver Metro Chamber of Commerce CEO Kelly Brough, who served as Democratic Sen. John Hickenlooper’s chief of staff when he was mayor in the 2000s; criminal justice activist Lisa Calderon, who took third place with 19% when she challenged Hancock in 2019; anti-gang activist Terrance Roberts; Ean Tafoya, an environmental activist who badly lost a 2015 race for City Council; and self-funder Andy Rougeot, who is the one Republican in the campaign. Brough, Calderon, Herod, and Ortega would each be the first woman to lead Colorado’s capital city.

Zelinger notes that this is the first election cycle where candidates will be able to accept public campaign contributions from the Fair Elections Fund, which he explains “provides a nine times match for a contribution of $5 to $50, once a mayoral candidate receives 250 unique contributions” from city residents. All of the notable contenders other than Rougeot, who has contributed $250,000 of his own money to his bid, are participating in the program, and Hansen says he’ll join in as well.

Iowans last week voted 65-35 to pass Amendment 1, which GOP lawmakers voted along party lines to place on the ballot as an amendment that will now add a constitutional right to “keep and bear arms.” The amendment additionally subjects any and all laws restricting that right to a standard for judicial review that makes it much harder for such restrictions to survive in court.

In Oregon, voters headed in the completely opposite direction by passing citizen-initiated Measure 114 by a 51-49 margin to adopt one of the strictest gun safety laws in the country: It will require firearm purchasers to obtain a permit, submit to a federal background check, complete a hands-on safety class, and get fingerprinted before they can acquire a gun, and the new statute also bans magazines that can hold more than 10 rounds of ammunition.

Perhaps the biggest question looming over the contest ahead of the Nov. 28 filing deadline is what former Gov. Pat Quinn will do, but he says he’ll make his plans known Thursday. Quinn made a surprise appearance earlier in the week at a Lightfoot event touting one of her programs, and she used the occasion to commend him. The former governor, though, told the Chicago Sun-Times not to “read anything” into his presence “other than celebrating something good for the West Side, where I live.”

OR Ballot: Oregon voters by a 51-49 spread have approved Measure 111, which was placed on the ballot by the Democratic legislature and will amend the state constitution to “ensure that every resident of Oregon has access to cost-effective, clinically appropriate and affordable health care as a fundamental right.”

Ballot Measures: Over the last decade, voter-initiated ballot measures have been a key tool for strengthening fair elections and adopting progressive policies over the opposition of GOP lawmakers, which is why Republicans in numerous states have responded by trying to restrict the initiative process itself. Voters in Arizona and Arkansas this year voted on multiple GOP-supported measures aimed at making it harder for voters to pass laws at the ballot box, some of which passed while others were defeated.

In Arizona, voters by a 64-36 margin rejected Proposition 128, which would have enabled the GOP legislature to amend or fully repeal any voter-initiated law if any single part was ruled unconstitutional, even if the rest of the law remained valid. Existing Arizona law only allows legislators to alter or repeal voter-initiated laws if voters subsequently approve of the changes or if a three-fourths supermajority of lawmakers approves amendments that “further the purpose” of the original initiative, making changes or repeal much harder.

However, Arizona voters passed Proposition 129 by a 55-45 margin to impose a single-subject limit on future citizen initiatives—but not measures advanced by the legislature. Conservative-dominated courts in other states such as Florida have aggressively used their single subject limits to block democracy reforms and other progressive measures, and conservatives tightly control Arizona’s Supreme Court after Republicans under Gov. Doug Ducey packed the court by adding two seats in 2016.

Lastly in Arizona, the Associated Press has called a win for Proposition 132, which leads 51-49. This measure would require a 60% supermajority of voter support to pass any future constitutional amendments placed on the ballot by voters or lawmakers if those amendments raise taxes or impose new ones (but not those that lower taxes). Until now Arizona only required simple majorities to pass amendments, while only a handful of other states require supermajorities for some or all types of measures.

Meanwhile in Arkansas, voters rejected by a 59-41 margin GOP-backed Issue 2, which would have required a 60% voter approval instead of a simple majority to pass future ballot initiatives, including both amendments and statutes, and also amendments put on the ballot by lawmakers, but not legislatively approved statutes. Arkansas voters in 2020 rejected a different GOP effort to make it disproportionately harder for progressives to pass initiatives than for conservatives, and Issue 2’s defeat boosts the odds of success for an expected future effort to reform redistricting and eliminate the GOP’s new gerrymanders.