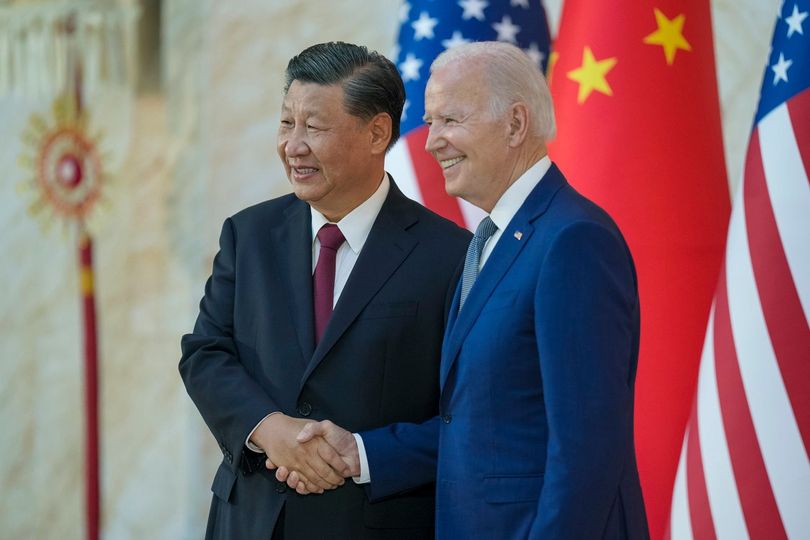 Over the summer the New York Times reported that James Comey and Andrew McCabe, at one time the No. 1 and 2 at the FBI, were subjected to rare, highly intrusive audits by the IRS. It was fishy because the odds were very long of two highly public foes of Donald Trump each getting unusual treatment from the IRS.

Now there’s more. Former Trump Chief of Staff John Kelly tells the Times that while he was still at the White House Trump repeatedly said he wanted his political enemies to be investigated by the IRS. Among those Trump singled out, according to Kelly: Comey and McCabe.

For his part, Kelly said he thought he had talked Trump off the ledge. It involved some contentious conversations about ethics and the law. But Kelly seemed to think he had averted Trump acting on the worst of his vengeful instincts. Notably, the audits of Comey and McCabe came after Kelly left the White House.

Among the other people Trump wanted to send the IRS after, according to Kelly, were Hillary Clinton, Jeff Bezos, John Brennan, Peter Strzok, and Lisa Page.

A Trump spokesperson had a thoughtful and muted response to the Kelly allegations: “It’s total fiction created by a psycho, John Kelly, who never said this before, and made it up just because he’s become so irrelevant.”

With the midterms over, Senate control settled, and House control nearly decided, the Justice Department is free once again to take overt investigative steps in its various investigations into Donald Trump.

The Mar-a-Lago documents investigation seems to be the farthest along, but it’s still hamstrung by the special master process that a Trump-friendly federal judge in Florida imposed. So I wouldn’t anticipate an indictment until after either the special master is done in mid-December or the 11th Circuit Court of Appeals shuts the process down as the Justice Department has requested. But we may still see more publicly obvious moves from DOJ now that the election is past.

The same is true of the Jan. 6 investigations, which continue to grind along but with a relatively low public profile.

“Kevin McCarthy will take his first step toward the speakership this week. It’s looking increasingly like a leap straight into chaos,” Politico reports.

“As Republicans begin grappling with the reality of a much smaller majority next year than they’d hoped, the GOP leader’s once-clear ascent to the top House gavel is now under threat from the right — an echo of the circumstances that helped derail his 2015 bid for the spot. And a full picture of his problems could emerge as soon as Tuesday, when McCarthy is slated to be nominated as the GOP conference’s pick for speaker.”

“While McCarthy is not worried about any challengers and only needs a simple majority during that vote to become the GOP’s speaker nominee – the real test would come in January when he would need 218 votes on the floor – the likely challenge from Biggs could expose how McCarthy is currently short of 218 votes and open up uncomfortable conversations about why an oft-promised ‘red wave’ never materialized.”

Charlie Sykes: “Last Tuesday destroyed Kevin McCarthy’s future. No matter what the final House margin turns out to be, McCarthy is cooked. If the GOP wins a narrow dysfunctional majority (which looks likely), he’ll either be ousted or gelded by the NutCase Caucus.”

Rep. Lee Zeldin (R-NY), who lost a surprisingly close race for governor last week, has spoken with GOP elected officials and party activists who want him to run for the chairmanship of the Republican National Committee, NBC News reports.

Donald Trump’s scheduled Tuesday campaign announcement “is still moving full steam ahead despite fellow Republicans begging him to hold off in light of the pending Georgia contest,” Politico reports.

“One person familiar with his plans told Playbook that Trump would never postpone the kickoff, if only because doing so would be a tacit acknowledgement that he is, in fact, a drag on GOP candidates running in close general elections.”

“Trump’s team is trying to frame his announcement to feel ‘more like 2016, less like 2020,’ according to another top adviser. There’s a hope in his camp that since he’ll be declaring against an incumbent, he can reclaim an anti-establishment, Washington-outsider mantle.”

“Donald Trump has proven himself to be dishonest, disloyal, incompetent, crude and a lot of other things that alienate so many independents and Republicans. Even a candidate who campaigns from his basement can beat him.” – Rep. Mo Brooks (R-AL), quoted by AL.com.

Playbook: “Democrats’ better-than-expected midterm showing has made a Pelosi return suddenly seem a lot more plausible — particularly if Democrats somehow manage to hold the House. That’s because the party would likely have only a one- or two-seat margin, a dynamic that would make managing the already unruly Democratic caucus an almost impossible task.”

“Impossible, that is, for anyone except Pelosi, who has proven she can do just that and could see herself being drafted into staying on for another two years.”

My read: If Dems retain control of the House, Pelosi stays. If not, welcome to Minority Leader Hakeem Jefferies.

“The House and the Senate are back in Washington for the first time in six weeks, with the Republican Party in tumult and Democrats in ecstasy over the results of the midterm elections,” the Washington Post reports.

“Republicans in both chambers are scheduled to elect their leaders for the next Congress this week (the House on Tuesday, the Senate on Wednesday) in what promises to be a tense few days as rank-and-file members ask what went wrong, who’s to blame and what’s going to be done about it.”

Politico: “The two leaders shook hands against a backdrop of flags and, in their brief opening remarks, focused on the need to create a foundation for a relationship. … The two men, along with their small team of aides and translators, then disappeared to begin their hours-long meeting.“

Biden quoted by the Washington Post: “I know I’m coming in stronger, but I don’t need that. I know him well. He knows me. There’s no — we have very little misunderstanding. We just got to figure out where the red lines are and what we — what are the most important things to each of us going into the next two years. And his circumstance has changed, to state the obvious, at home.”

Mike Pence told ABC News that Donald Trump’s “words were reckless” on January 6, adding that they “endangered me and my family and everyone at the Capitol building.” Pence was interviewed by David Muir on ABC News about what happened during the January 6 insurrection:

PENCE: David, I was at the Capitol. I wasn’t at the White House. I can’t account for what the president was doing that day. I was at a loading dock in the Capitol where a riot was taking place.

MUIR: But why wasn’t he making these calls?

PENCE: That’d be a good question for him.

“The Supreme Court on Monday cleared the way for the House panel investigating the Jan. 6, 2021, insurrection to access phone records belonging to the Arizona Republican Party’s chairwoman,” The Hill reports.

“Democrats will put the bipartisan Respect for Marriage Act up for a vote this week just days after the midterms,” Semafor reports.

“Earlier this month, Semafor reported that Senate Majority Leader Chuck Schumer intended to pass the Respect for Marriage Act by year’s end and that it was expected to have enough votes. This legislation, which has already passed the House of Representatives with 47 Republicans joining Democrats, would federalize same sex marriage recognition and protection if the Supreme Court reverses itself on same sex marriage rights.”

“Amazon founder Jeff Bezos said he will give away the majority of his wealth during his lifetime, becoming the latest billionaire to pledge to donate much of his vast fortune,” the AP reports.

“Bezos had been criticized in the past for not signing the Giving Pledge, the campaign launched by Bill Gates, Melinda French Gates and Warren Buffet to encourage billionaires to donate the majority of their wealth through philanthropy.”

Said Trump: “You do have people in this country that happen to be Jewish that are not doing the right thing for Israel – too many. The Democrats get 75 percent of the Jewish vote, which is hard to believe. We can’t let that continue.”

Trump noted “all of the horrible things that have taken place with Biden and Barack Hussein Obama… and then it’s 75 percent of the vote.”

The difference between 50 and 51 seats for Dems is huge. So the stakes in the Senate runoff in Georgia remain very high. Don’t take my word for it:

With Democratic control of the Senate now assured by Sen. Catherine Cortez Masto’s re-election victory in Nevada, President Biden will have another two years to remake the federal judiciary.

“These are heady days for President Biden. The midterm elections offered long-sought validation. Democrats held onto the Senate, and even if they lose the House it will be by a narrow margin. The Republicans are in retreat and, by the way, so are the Russians and, just a bit at least, so is inflation,” the New York Times reports.

“But even as the history-defying midterms went a long way toward solving some of the president’s immediate political problems, they did not miraculously make him any younger. A week from Sunday, Mr. Biden, the oldest president in American history, will turn 80, a milestone the White House has no plans to celebrate with fireworks or splashy parties. And so Mr. Biden confronts a choice that still leaves many in his party quietly uncomfortable: Should he run for a second term?”

“Top advisers such as Ron Klain, Anita Dunn, Mike Donilon, Steven J. Ricchetti and Jennifer O’Malley Dillon are already meeting to map out what a 2024 campaign would look like.”

“Republicans had a lousy night nationwide Tuesday. In Pennsylvania, it was an unmitigated disaster,” the Philadelphia Inquirer reports.  “Within the state Republican Party , some insiders are already maneuvering for change. Ted Christian, a former Trump adviser in the state, and Andy Reilly, the Pennsylvania GOP national committeeman, are both making moves toward potentially replacing the state party chairman, Lawrence Tabas, according to three Republicans familiar with the conversations, who asked for anonymity to disclose private talks.”

“But even if there’s no shift in leadership, interviews with more than a dozen GOP officials, strategists, and party leaders revealed widespread frustration with the state party, particularly its decision not to endorse an alternative to gubernatorial nominee Doug Mastriano during the Republican primary.”

CIA Director Bill Burns is meeting with his Russian intelligence counterpart, Sergey Naryshkin, in Ankara Monday as part of an ongoing effort by the US to “communicate with Russia on managing risk” and to discuss the cases of “unjustly detained US citizens,” CNN reports.

Associated Press: “There have been no widespread reports of voters being turned away at the polls, and turnout, while down from the last midterm cycle four years ago, appeared robust in Georgia, a state with hotly competitive contests for governor and U.S. Senate. The lack of broad disenfranchisement isn’t necessarily a sign that everyone who wanted to vote could; there’s no good way to tell why certain voters didn’t cast a ballot.”

Washington Post: “Deliberations on an unprecedented package of billions of dollars in military assistance to the self-governing island democracy come as Biden and Chinese leader Xi Jinping meet in Bali on Monday, with maintaining peace and stability in the Taiwan Strait a top item of discussion.”

“The bipartisan effort would enable the U.S. military to dip immediately into its own stocks of weapons like Javelins and Stingers — something done at scale only for Ukraine, officials said — and provide weapons for the first time to Taiwan through the foreign military financing program, paid for by the United States.”