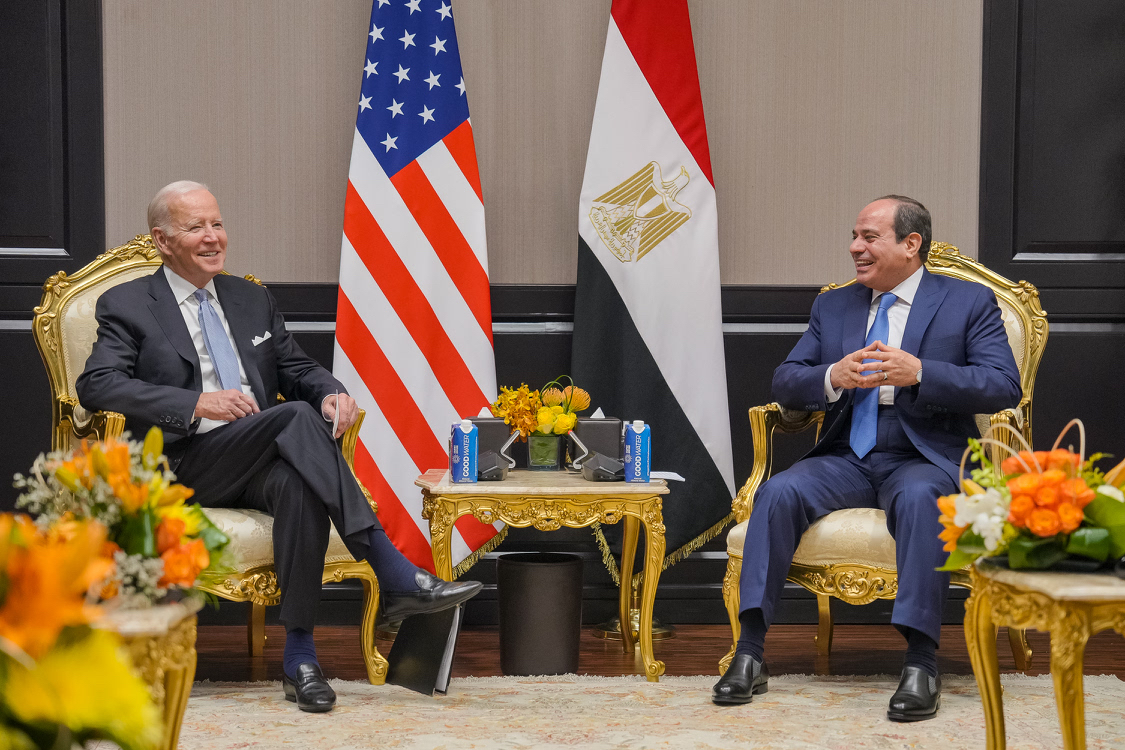 “Donald Trump’s Republican critics renewed their push on Sunday to steer their party away from the former president, warning that he could hurt Republicans’ chances of winning the Senate runoff in Georgia next month if he announces plans for another White House bid on Tuesday,” the Washington Post reports.

Said Maryland Gov. Larry Hogan (R): “It’s basically the third election in a row that Donald Trump has cost us the race. And it’s like, three strikes, you’re out.”

He added: “The definition of insanity is doing the same thing over and over again expecting a different result. Donald Trump kept saying we’re gonna be winning so much we’re gonna get tired of winning. I’m tired of losing. That’s all he’s done.”

NBC News: Did Trump hurt Republicans in the 2022 elections? The numbers point to yes.

“Giving 4 Trillion Dollars to the Radical Left for the Green New Deal, not Infrastructure, was an even bigger mistake. He blew the Midterms, and everyone despises him and his otherwise lovely wife, Coco Chow!”

Former Trump White House senior adviser Stephen Miller laid out a number of issues that he saw as the reason Republicans failed to materialize a “red wave” during the midterm elections, including issues with funding and messaging, Axios reports.

Said Miller: “We have to note the extraordinarily fateful decision on the part of the senate leadership fund and Mitch McConnell to take the money that should have been spent in Arizona to get Blake up on TV early on, and instead give it to Lisa Murkowski for a Republican battle against the Republican-backed nominee in Alaska.”

New York Times: “Now, after a string of midterm losses by candidates Mr. Trump supported, there are signs of another Republican effort to inch the party away from the former president ahead of his scheduled announcement on Tuesday of another run for the White House — even as his allies on Capitol Hill demand new acts of fealty to him.”

“It has not escaped Republicans that this week represented the third consecutive political cycle in which Democrats ran with considerable success against the polarizing former president. While they rarely spoke his name, Mr. Trump formed the background music to their attacks asserting that the Republican Party had grown too extreme.”

“Speaker Nancy Pelosi signaled that Democrats will seek to extend the federal debt ceiling during the lame-duck session of Congress, avoiding a potential fight with Republicans that she said could threaten the US’s credit rating,” Bloomberg reports.

“Even with party control of the House undecided on Sunday after the Nov. 8 midterm elections, Pelosi cited Republican threats to use the debt-limit extension ‘to cut’ Medicare and Social Security.”

“Speaker Nancy Pelosi (D-CA) said Sunday her congressional colleagues are encouraging her to run for another term as Democratic leader,” Axios reports.

“The comment is the starkest indication yet that Pelosi is mulling another run for the position she’s held variably as speaker and minority leader for nearly two decades.”

Speaker Nancy Pelosi (D-CA) suggested House Minority Leader Kevin McCarthy (R-CA) does not have enough votes to be elected Speaker if Republicans take the majority in the lower chamber, The Hill reports.

Nicco Mele: “Do not fool yourself into thinking Democrats control the Senate yet; technically a 50/50 Senate requires bi-partisan power-sharing. In the last Senate, that meant Republicans blocked a January 6th Commission — it’s why that job was taken up by the House of Representatives.”

“A Democratic victory in the Georgia run-off is hugely important because a 51-49 does not require power-sharing — which Democrats will want if a Republican House pursues impeachment and other wastes of time and money.”

Playbook: “We wouldn’t call it a blue wave, as Minnesota Sen. Amy Klobuchar did today, but it’s the most impressive midterm showing for an incumbent president since 2002, when George W. Bush was in the White House and Republicans gained eight House seats and two Senate seats. But Bush did that with a nearly 70% approval rating as the country continued to rally around him after 9/11.”

“President Biden’s approval rating on Tuesday averaged 41%,per FiveThirtyEight. And 72% of Americans said the country was headed in the wrong direction.”

“Voters looked at the alternative to Bidenism — and they chose to stick with the president and his party.”

Sen. Rick Scott (R-FL) on Sunday said Senate GOP leadership “caved” to Democrats on a number of legislative bills over the past year, citing that as one reason Republicans did not perform as well as projected in the midterm elections, The Hill reports.

Said Scott: “What do we stand for? What are we hell-bent to get done? The leadership in the Republican Senate says, ‘No, you cannot have a plan. We’re just going to run against how bad the Democrats are.’ And, actually, then they cave into the Democrats.”

“The advertiser exodus from Elon Musk’s Twitter Inc. is accelerating, and it could be hard for the billionaire to bring them back soon,” the Wall Street Journal reports.

“The Republican Party, staring at the worst midterm performance by a party out of power in two decades, traded recriminations on Friday over whether the ultimate cause was poor candidates, an overheated message or the electoral anchor that appeared to be dragging the G.O.P. down, former President Donald Trump,” the New York Times reports.

“With election results still rolling in, a thin Republican majority in the House still appeared likely, but the party’s hopes of capturing the Senate appeared in doubt Friday night after the Democratic incumbent Mark Kelly’s victory over Blake Masters in Arizona. For Republican leaders who had predicted a red wave that would broadly rebuke President Biden, the disappointing showing was undeniable.”

“Democratic incumbents have so far won nearly all of their races, while Republicans have racked up surprising losses from Maine to Washington, with candidates endorsed by Mr. Trump losing the pivotal Senate contest in Pennsylvania and key House and statewide races in Michigan, Ohio, North Carolina and elsewhere.”

Washington Post: “As Republicans grapple with their lackluster performance in Tuesday’s midterm elections, one man has begun to take on an unusual amount of criticism from his fellow partisans: Donald Trump.”

“The Democratic Party’s stunning hold on Senate control will enable President Joe Biden and his allies in the chamber to do something that has been a low-key success: churning out federal judges without the threat of Republican obstruction,” NBC News reports.

“The Senate majority, inked by a Democratic win in Nevada, gives Biden a clear runway to continue one of his most consequential pursuits: reshaping federal courts with a diverse array of lifetime-appointed liberal judges, including record numbers of women, minorities, former public defenders and civil rights lawyers.”

“The Senate has confirmed 84 Biden-nominated judges, including Justice Ketanji Brown Jackson as the first Black woman on the Supreme Court and 25 appeals court judges, confirming judges at a faster rate than President Donald Trump before the 2022 election.”

“We’ve seen the affirmation of the president’s agenda, vindication of his message, and rejection of so many election deniers. So yes, you could say the White House is in a pretty good mood.” — White House adviser Anita Dunn, quoted by the New York Times.

NBC News: “There’s Republican Gov. Ron DeSantis, whose decisive victory in Florida Tuesday night only added fuel to speculation about his national plans. Similarly, high-profile Democratic governors like Gavin Newsom of California and J.B. Pritzker of Illinois also had big wins. But more competitive midterm contests appear poised to inject a host of new prospects into the 2024 conversation for both parties.”

“For Democrats, that includes two from key presidential battlegrounds: Michigan Gov. Gretchen Whitmer, who won a second term following a tough and expensive re-election battle after previously making Biden’s short list for vice president in 2020, and Josh Shapiro of Pennsylvania, who was already being hyped as the future ‘first Jewish president’ before winning in a landslide Tuesday. Wes Moore, elected Tuesday as Maryland’s first Black governor, likewise won with lofty national expectations and has the added benefit of working in close proximity to the nation’s capital.”

Washington Post: “The narrowing path for Republican victory has stunned lawmakers from both parties, freezing plans for legislation and leadership maneuvers as they wait to see who takes control and learn the margins that will dictate which ideological factions wield power. Regardless of the outcome, the lack of a “red wave” marks a devastating outcome for Republicans, who believed they would cruise to a large governing majority in the House and possibly flip the Senate.”

“The GOP faces a small but real prospect that it may not reclaim the House majority despite high pre-election hopes based on the disapproval of President Biden, record inflation and traditional losses for the party that holds the White House.”

Washington Post: “In private conversations among donors, operatives and other 2024 presidential hopefuls, a growing number of Republicans are trying to seize what they believe may be their best opportunity to sideline Trump and usher in a new generation of party leaders.”

“Many blame Tuesday’s midterm results — Republicans made smaller-than-expected gains in the House and failed to gain control of the Senate — on the former president, who during the primaries elevated extremist candidates who fared poorly in the general election. The discouraging election outcomes, combined with Trump’s 2020 loss to Biden, have increased both public and private talk of considering a post-Trump world.”

New York Times: “Just weeks after President Biden and his Chinese counterpart, Xi Jinping, laid out competing visions of how the United States and China are vying for military, technological and political pre-eminence, their first face-to-face meeting as top leaders will test whether they can halt a downward spiral that has taken relations to the lowest level since President Nixon began the opening to Beijing half a century ago.”

“Benjamin Netanyahu moved closer to becoming Israel’s prime minister for a record sixth term after President Isaac Herzog said Friday that he would hand him a mandate to form a coalition expected to be made up of right-wing, ultranationalist and religious parties,” the Wall Street Journal reports.