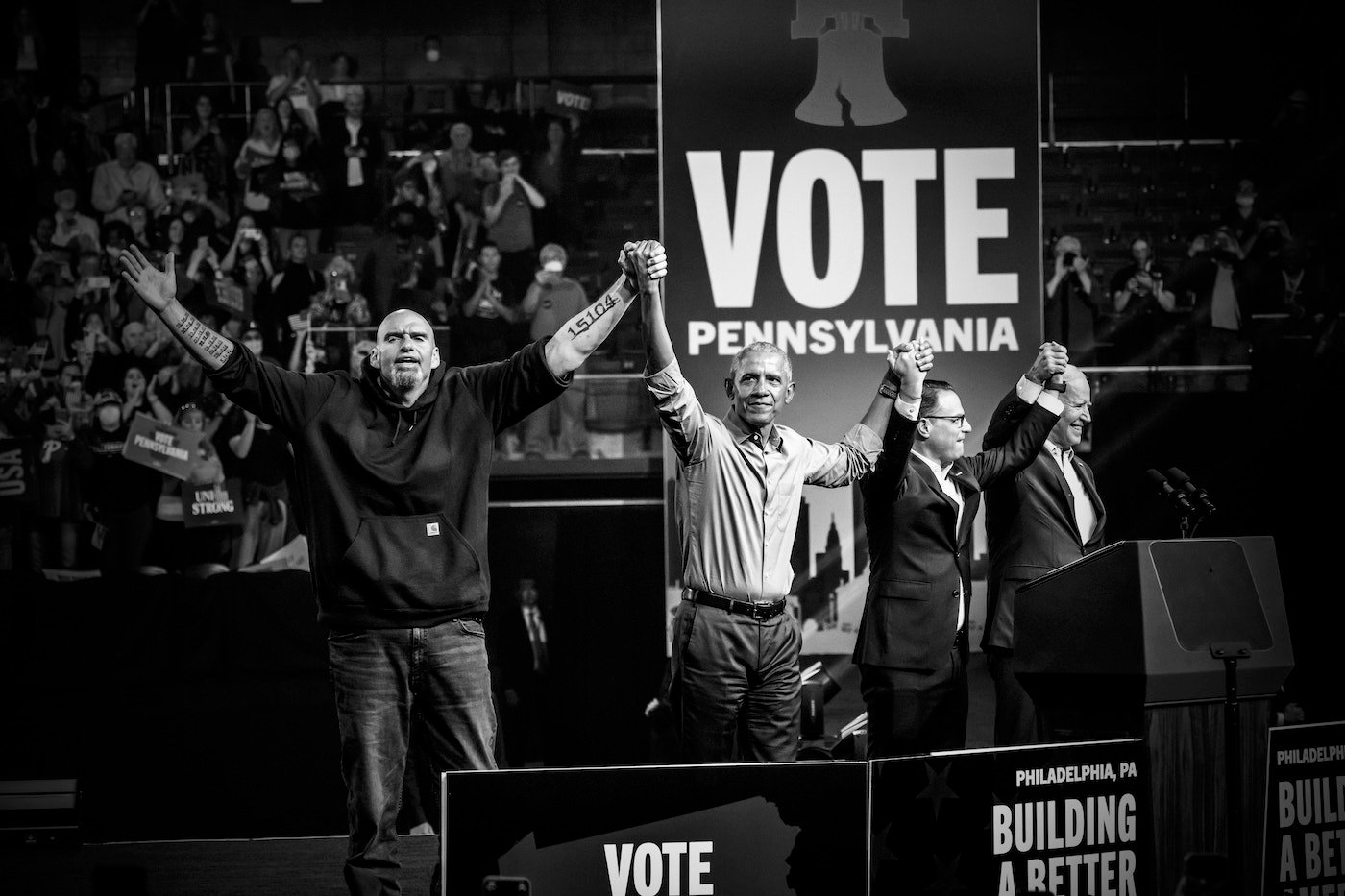 Democrats have netted at least one seat through John Fetterman’s victory over Mehmet Oz in Pennsylvania, which means that Republicans need to take three of the four of the races that the Associated Press has not called the following races as of Wednesday morning in order to secure a bare 51-49 majority:

A Dec. 6 runoff would take place in Georgia should no one take a majority after all votes are tabulated.

The GOP is also guaranteed to keep Alaska, though we almost certainly won’t know if Sen. Lisa Murkowski has held on against Trump-backed intra-party foe Kelly Tshibaka until instant-runoff tabulations take place on Nov. 23.

Democratic incumbent Maggie Hassan also convincingly prevailed in New Hampshire, where most polls showed her locked in a tight race against Don Bolduc. Colorado Sen. Michael Bennet and Washington Sen. Patty Murray likewise turned in strong wins against well-funded GOP foes in races that attracted some notable outside spending from both sides and where several surveys found things deceptively close.

Republicans, meanwhile, kept Ohio, where the party unexpectedly had to deploy a massive amount of money to put J.D. Vance over the top against Tim Ryan, and North Carolina, where Rep. Ted Budd beat Democrat Cheri Beasley.

Sen. Ron Johnson (R-WI) declared Wednesday morning that “the race is over” as he narrowly defeated challenger Mandela Barnes (D) in a hotly contested race that could help determine which party controls the U.S. Senate, the Milwaukee Journal Sentinel reports.

Additionally, Florida Sen. Marco Rubio decisively fended off Democrat Val Demings as his party romped across the state, while longtime Iowa Sen. Chuck Grassley beat Mike Franken in another race where major outside groups stayed away; Grassley leads 56-44 with most votes tabulated, a clear win that’s still considerably closer than any of his prior six re-election campaigns. Finally, Utah Sen. Mike Lee turned back a prominent challenge from conservative independent Evan McMullin.

“But it looks like there are more Democratic votes left to be counted than Republican ones — especially regarding mail-in ballots, which Nevada accepts as long as they were postmarked by Election Day and arrive by Nov. 12.”

Jon Ralston does the math and concludes Cortez Masto has a shot at winning.

“Georgia’s U.S. Senate race is heading to a runoff, with neither major candidate on track to win a majority of votes,” Politico reports.

Democrats Wes Moore and Maura Healey easily won their races to succeed departing Republican chief executives in Maryland and Massachusetts, while the AP has not yet projected any flips for the GOP. The following races remain uncalled as of Wednesday morning:

Democratic incumbents also held on in some key swing states. The tightest victory belongs to Wisconsin Gov. Tony Evers, who turned back Tim Michels after a very closely watched and pricey race. Minnesota Gov. Tim Walz and Michigan Gretchen Whitmer also prevailed over hardline opponents in contests where some polls showed things tight but the national GOP never made priorities. Illinois incumbent J.B. Pritzker also had no trouble beating far-right Republican Darren Bailey in an election that, thanks to massive spending by Pritzker and conservative megadonor Richard Uihlein, was one of the most expensive of the year.

Over in the Rocky Mountains, New Mexico Gov. Michelle Lujan Grisham won her expensive and nasty fight against Republican Mark Ronchetti, while Colorado Gov. Jared Polis’ easy victory over Heidi Ganahl gives his party its fifth win in a row in this onetime swing state.

The GOP’s most prominent gubernatorial victory so far comes in Florida, where GOP Gov. Ron DeSantis leads Rep. Charlie Crist 59-40 with most of the vote tallied. Georgia incumbent Brian Kemp also convincingly won his second bout against Stacey Abrams in neighboring Georgia, while Oklahoma Gov. Kevin Stitt scored a double-digit win over Joy Hofmeister in a race that looked far closer than it turned out.

“Her narrow victory over Schmidt, the state’s three-term attorney general, came after she focused her campaign almost exclusively on the economy, tax cuts, education and her desire to work with Republicans.”

“It was a hard-fought and expensive win by Democrats, who have a huge party registration advantage in Oregon but faced strong headwinds this year amid voter frustration at problems including homelessness, violent crime and lackluster delivery of government programs and services.”

The AP has called 199 seats for the GOP and 177 for Democrats: The latter figure includes five California House contests where two Democrats were on the general election ballot, but it’s not yet clear which won. The remaining 59 constituencies remain unresolved.

Inside Elections notes that their Toss Up races “are breaking disproportionately for Democrats” and the most likely House range is now closer to Republicans adding between 4 and 11 seats.

Nate Cohn: “Republican control of the House was all but a foregone conclusion heading into Tuesday, but Democrats outran the polls and projections.”

“Republicans will have to claw their way to a majority, seat by seat. The Needle suggests Republicans are likelier than not to win the House, but it is no certainty. As of 5 a.m. Wednesday, there was only enough information to have them projected to win 197 seats — 21 short of the 218 needed for a majority.”

“They’re nowhere close to being called the winner in many of these races — in many of these states, late mail ballots have the potential to help Democrats. It will take days to count these ballots.”

Some of these seats are almost certainly uncalled because of slow vote counting. In California’s new 25th District, for example, Democratic Rep. Raul Ruiz enjoys a 62-36 edge over his unheralded GOP foe, Brian Hawkins, but the AP estimates that only 30% of the vote is tabulated. Others may result in some genuine shockers when the dust clears: In Colorado’s 3rd, Democrat Adam Frisch posts a 50.6-49.4 lead over far-right Rep. Lauren Boebert with 93% of the estimated vote in, which would be a true upset in this 53-45 Trump constituency.

Republicans so far have flipped seven constituencies to the Democrats’ four. The GOP took six open seats it gerrymandered:

The two incumbent vs. incumbent races were an even split between the two parties. Republican Rep. Neal Dunn defeated Democratic colleague Al Lawson in Florida’s 2nd, which was no surprise as that seat favored Trump 55-44. Democratic Rep. Vicente González, though, came out on top in his far more competitive contest against Republican incumbent Mayra Flores in Texas’ 34th.

David Wasserman: “The NBC News House estimate is that Republicans will win 220 seats plus or minus 10 seats, meaning the fate of the House rests with nine uncalled competitive races in California, six in New York, two in Nevada, two in Oregon, two in Arizona, two in Colorado and a smattering in other states. Republicans have a slightly better than even chance of taking the House, but this could take more than a week to sort out (especially in slow-counting California and Arizona), and could depend on recounts. If it weren’t for GOP Rep. Lee Zeldin’s coattails in the New York governor’s race, Democrats might be favorites to hold onto their majority.”

“The blue state vs. red/purple state divide was real — for the most part. Democrats struggled in New York and came within a few points of losing double-digit Biden seats in Connecticut and Rhode Island (miraculously, it looks like Democrats will avoid losing a single New England seat). But Democrats were able to hold their ground in states where split control of state government made abortion a more prominent issue — such as Kansas, Michigan, New Hampshire, Ohio and Pennsylvania.”

“He has long advocated campaigning in deep-red areas full of white, working class voters that have shifted toward the GOP in recent decades, not to win majorities there but to cut in to Republican advantages by splitting their voting coalitions.”

Atlanta Journal Constitution: “Several factors explain why Warnock outperformed the rest of the statewide Democratic ticket. Walker’s history of misstatements, violence against his ex-wife and controversy over abortion kept some GOP voters away.”

“But Warnock’s Biden-free, more moderate campaign, also helped make him a viable alternative to those potential swing voters. A more than $70 million cash advantage over Walker helped, too.”

“After Stacey Abrams’ first election defeat in 2018, Gov. Brian Kemp (R) liked to joke that she became even more famous than him. She spoke to sold-out venues around the globe, was courted by powerful politicians and was vetted to be Joe Biden’s running mate,” the Atlanta Journal Constitution reports.

“But her future after a second loss to Kemp is far more uncertain. Her campaign struggled to rebuild the same electoral coalition that fueled her near miss four years ago and set the stage for Democratic victories in 2020.”

“I have the privilege to concede this race to J.D. Vance, because the way this country operates is that when you lose an election you concede and you respect the will of the people.” — Rep. Tim Ryan (D-OH), conceding his U.S. Senate race last night.

“Democrats powered their way to control of the Michigan House and Senate on Tuesday, marking the first time the party secured a majority of seats in both legislative chambers in nearly 40 years,” the Detroit Free Press reports.

“That means that it’s highly unlikely we’ll know right away which party will control both chambers in Congress.”

CNBC: Here are the states where recounts are more likely.

Washington Post: “Beto O’Rourke has spent 1,175 of the last 2,048 days of his life running for office. Three races in six years: U.S. Senate, then president, now governor. O’Rourke is young, just 50 years old. He has become the emblem of unrealized ambition in the Democratic Party, a candidate who has kept going and going and may keep going still, even if he falls short on Tuesday.”

Open Secrets lists the five most expensive U.S. Senate races this cycle and the amount spent is just staggering:

Nate Cohn ran an experiment where he paid Wisconsin voters to complete a poll.

“The data is still preliminary, and it will probably take at least six months, if not longer, before we can reach any final conclusions. But there is one immediate difference between the two groups, and that is in the polls’ response rates: Nearly 30 percent of households have responded to the survey so far — a figure dwarfing the 1.6 percent completion rate in the parallel Times/Siena poll.”

“That said, an initial glance at the topline findings may be sobering for anyone who hoped that $25 and higher response rates would break through to reach the coveted ‘hidden’ Trump vote. While there were important differences between the high- and low-incentive surveys — including some that hold promise for improving Times/Siena surveys and others going forward — there was not necessarily obvious evidence of a breakthrough to a vastly different pool of respondents.”