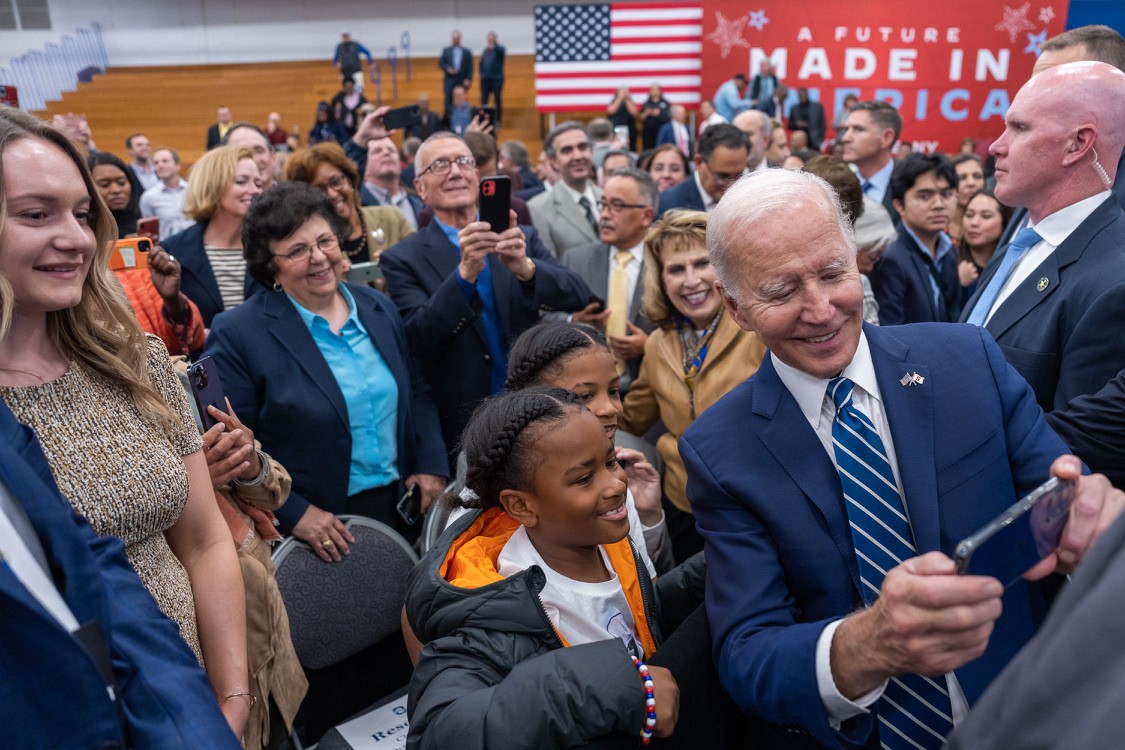 “Democrats across the country scrambled Thursday to bolster candidates in places President Biden carried safely in 2020, the latest sign of panic that they could face major losses in next week’s midterm elections,” the Washington Post reports.

“As Republicans have focused on inflation and crime to go on offense in Democratic territory over the past month — competing in traditionally blue districts in California, Oregon, New York, Illinois and elsewhere — there’s a growing sense among Democrats that there’s little they can do at this point to combat the combined forces of history and economics.”

Washington Post: “While many Democrats have privately believed for months that Republicans were likely to take the House, they have expressed increasing fears in recent days that voters could hand the GOP a significant majority — an outcome that would amount to a major rebuke of the party in power.”

“In the first major election since the Supreme Court overturned Roe v. Wade, the debate over abortion rights has not emerged as a political silver bullet for Democrats, who have largely abandoned hopes that a surge of voter outrage over the decision alone would lift them over obstacles they face in the midterms,” the New York Times reports.

“After spending hundreds of millions of campaign dollars on abortion messages — nearly $415 million on ads alone — Democrats have found the impact to be uneven. While support for abortion access is driving the party’s most loyal voters, it does not appear to be outweighing economic concerns for pivotal swing voters.”

POLLING. A new poll finds that 44% of registered voters — including 53% of Republicans — think the federal government is controlled by “a secret cabal.”

A new UC Berkeley Institute poll in Los Angeles finds Karen Bass continues to hold an edge over Rick Caruso in the race for mayor, 45% to 41% among likely voters, with 13% saying they remain undecided. But Bass’ advantage is within the poll’s margin of error and strikingly smaller than the 15-point margin she held a month ago.

“Senate Majority Leader Chuck Schumer predicted Thursday that Democrats will hold the U.S. Senate, propelled by strong voter turnout to buck a wave of Republican enthusiasm for gaining control of Congress in the midterm elections,” the AP reports.

“The language from Republican candidates in ads and speeches is clear and negative, using the 2,000-mile border between the United States and Mexico as a stark partisan dividing line,” the New York Times reports.

“President Biden’s policies, they argue, have led to unchecked borders and allowed immigrants, crime and fentanyl to pour into cities, turning every state into a border state.”

“Democratic candidates have a far murkier message, either avoiding the issue or leaning into tough talk that often addresses immigration on Republican terms.”

PENNSYLVANIA U.S. SENATOR. “Mehmet Oz, the Republican nominee for the U.S. Senate in Pennsylvania, and a supporter of codifying the right to same-sex marriage into law, is scheduled to campaign Wednesday afternoon at an event venue that does not permit same-sex weddings,” the Washington Post reports.

Politico: “Fetterman’s orbit knew how powerful a nod from Winfrey would be, and it worked behind the scenes to court her. The Fettterman campaign made a direct appeal to her for a meeting, according to a person familiar with the outreach.”

GEORGIA U.S. SENATOR. Washington Post: “Many Walker supporters interviewed here over three days last month are willing to forget — or at least not think too much — about the allegations against him because he supports a Republican agenda that aligns with their beliefs.”

ARIZONA U.S. SENATOR. Arizona Senate candidate Blake Masters (R) told the Daily Mail that he is “prepared to be a thorn in the side of party leader Mitch McConnell if he pulls off a win” and that he’ll take his cues from Sen. Kyrsten Sinema (D-AZ).

Said Masters: “She’s a very talented politician. She’s good. She’s active. She’s really actively engaged. And I hear this from Republicans — if you got a problem you call Sinema’s office you get a response.”

From the campaign: “Prior to the debate, an individual in the crowd gathered outside attempted to punch the General and was quickly apprehended and arrested. We are grateful to the quick response from law enforcement on the scene.”

Citizens for Sanity, a right-wing group that has been running some of the most racist and xenophobic ads of anyone this cycle, is spending a hefty $3.2 million for a late TV ad buy supporting Republican Don Bolduc despite the Mitch McConnell-aligned Senate Leadership Fund’s decision to triage this race on Oct. 21. Democrats never treated this race like it was in the bag for Democratic Sen. Maggie Hassan, though, and Senate Majority PAC is dropping another $1.2 million to support the incumbent.

Republican nominee Don Bolduc, a previously hardcore election denier who’s been watering down said denialism ahead of the general election, got upset when the 2020 election came up during his final New Hampshire Senate debate against incumbent Sen. Maggie Hassan (D-NH) last night.

“Thanks for giving [Hassan] a softball, that’s exactly what she needed,” Bolduc snapped at the debate moderator.

Other takeaways from the debate by CNN, the Wall Street Journal, the Hill, and the Associated Press.

NEW YORK GOVERNOR. “New York Gov. Kathy Hochul is scrambling to boost Democratic turnout, and she’s looking to some big names and employing a familiar message to do so,” Politico reports.

“Hochul, facing a tightening race against Republican challenger Lee Zeldin as the campaign shifts focus to crime and the economy, will rally Thursday in Manhattan with Vice President Kamala Harris and former Sen. Hillary Clinton. They’ll make a pitch intended to get women to the polls: Elect Hochul to a full term or put abortion rights at risk.”

FLORIDA GOVERNOR. Politico: “DeSantis has more than $90 million remaining in the bank after spending about $100 million total this election cycle on his reelection bid via his aligned committee and campaign. That huge sum is fueling speculation that the Florida governor, who cannot run for a third term, will use it to seed the early stages of a potential 2024 bid for the White House.”

The Portland Press Herald: “Mills and LePage clash in final debate before voters have their say”

The Associated Press: “Mills, LePage debate for a final time in race for governor”

MICHIGAN ABORTION REFERENDUM. Republican firm Cygnal’s latest poll shows Proposal 3 passing 52-43, which would enshrine the right to reproductive freedom including abortion into the state constitution. Although all recent polls have found voters poised to approve Proposal 3, several taken last month have disagreed over just how big of a lead the “yes” side has: a recent SSRS poll for CNN placed it ahead by a similar 54-45, a media-sponsored poll from EPIC-MRA found “yes” leading by a huge 60-33, while GOP firm Mitchell Research & Communications for MIRS News had “yes” winning just 50-47.