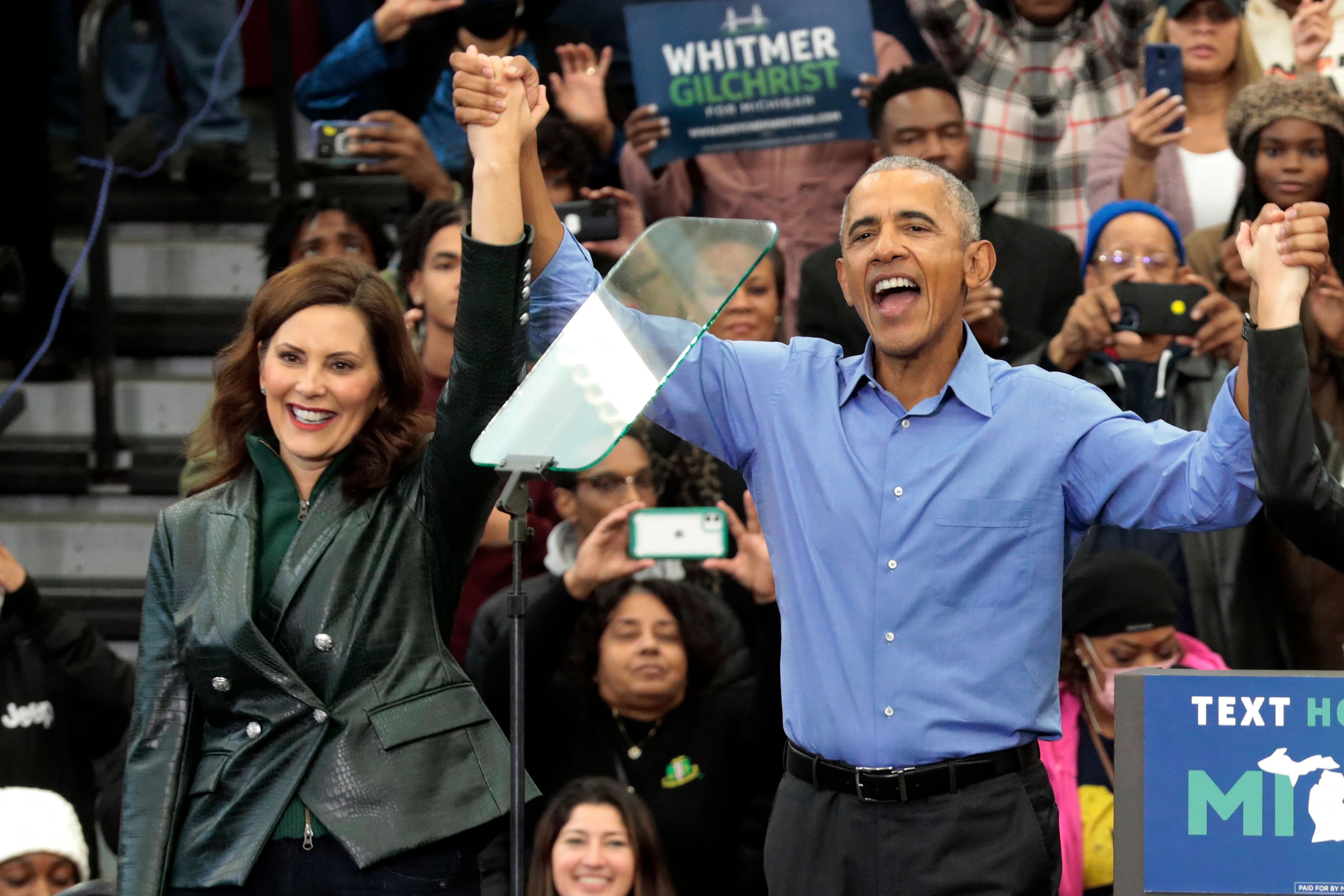 Washington Post: “A major part of his message is pushing Democrats to vote. Obama gave an interview on ‘Monday Night Football with Peyton and Eli,’ casually known as the ‘ManningCast,’ that drove about 10,000 views to a website that features information about voting, according to data from Obama’s office. Obama had more than 10 million views to a separate video aimed at engaging young voters.”

“He sat down last week with a group of Tik Tok influencers who are expected to be rolling out the Obama content in coming days, and he’s penned emails on behalf of lesser known Democratic committees including the Democratic Association of Secretaries of State and the Democratic Legislative Campaign Committee.”

“Obama’s also appearing in a slew of campaign commercials for Democrats, including ones airing in a number of gubernatorial contests, including in Oregon, Pennsylvania, Illinois and Maryland. Obama’s team says there are more coming.”

“With the Democratic Party facing a potential reckoning in little more than a week and its leader, President Biden, largely sidelined by low approval ratings, Senate candidates in excruciatingly tight elections are turning to a familiar face to try to push them over the finish line: Barack Obama,” the New York Times reports.

“The former president is no stranger to midterm heartbreaks, having faced a red tsunami in 2010 that cost him the House, then a crushing year in 2014 that cost him the Senate. For much of Donald J. Trump’s presidency, he studiously stayed out of politics, playing the elder statesman above the ugly fray.”

“But beginning on Friday, Mr. Obama will dive back in, at a rally for Georgia Democrats outside Atlanta, followed by events in Michigan and Wisconsin on Saturday, then Nevada and Pennsylvania next week.”

“Obama is the sole party leader able to draw major base-motivating crowds without simultaneously angering the other side,” the Washington Post reports.

Transportation Secretary Pete Buttigieg is the most requested surrogate on the campaign trail for Democratic candidates in the midterms, CNN reports.

“I understand why you might be worried about the course of the country. Sometimes it’s tempting just to tune out, watch football, watch ‘Dancing With The Stars.’ I’m here to tell you tuning out is not an option.”— Barack Obama, quoted by the Detroit News.

Lakshya Jain finds two very different pictures of the election when looking at the generic ballot.

“The first, by nonpartisan public pollsters… It suggests that the November elections are essentially a dead heat, and that if they were held today, the generic ballot would be a virtual tie.”

“The second is by partisan pollsters, and it suggests a more Republican picture; in fact, the average of partisan-affiliated pollsters (Trafalgar, Data For Progress, Navigator Research, Rasmussen Reports, Insider Advantage, and Echelon Insights) over the last week suggests an R+3 year.”

POLLING. A new CBS News poll finds 79% of Americans describe things in the country today as “out of control,” as opposed to “under control.” That doesn’t bode well for the party in power: Republicans are winning those who say “out of control” right now by more than 20 points, though they’re often the ones feeling that way to begin with.

For the first time this cycle, the Decision Desk HQ forecast now predicts that Republicans will flip the Senate — though with just a 50.4% likelihood — controlling an average of 51 seats.

“About half of Americans say either the economy or inflation is the most important issue in their vote for Congress, making pocketbook issues by far the most dominant in the run up to the midterm elections,” according to a new ABC News/Ipsos poll.

Ron Brownstein: “Are voters more upset with Democrats over the economy, or with Republicans over lingering Trumpism?”

PENNSYLVANIA U.S. SENATOR. Associated Press: “The open Senate seat in the commonwealth has for months been the most likely pick-up opportunity for Democrats in the evenly-divided Senate, but as prospects darken for Democratic incumbents elsewhere, a win in Pennsylvania is becoming an even more urgent insurance policy for the party to cling to Senate control.”

“Biden’s latest attempt to prop up Democratic nominee John Fetterman will be at a fundraising dinner for the state Democratic Party, where he’ll speak along with Vice President Kamala Harris, top party officials and the leading candidates on the midterm ballot in this presidential battleground state.”

Said Graham: “She raised $13 million in the last quarter. Ted raised four. From October 1 to October 19, the last reporting period, she raised 5. Ted raised one-and-a-half. I don’t know where all this money comes from, Sean.”

He added: “I just don’t believe this is legit—on the up and up.”

LOS ANGELES MAYOR. “Rick Caruso is on track to spend more than $100 million by Nov. 8 in his bid for Los Angeles mayor, an astounding sum that puts the real estate developer on par with candidate outlays in some of the country’s most closely watched and expensive midterm races,” the Los Angeles Times reports.

ARIZONA U.S. SENATOR. “Millions of last-minute dollars are flooding into Arizona to prop up Republican Senate nominee Blake Masters, after a key group aligned with GOP Leader Mitch McConnell decided against helping him in the race,” Axios reports.

“The Club for Growth, a leading conservative outside spender, is dropping $5.5 million into the Arizona Senate race in its closing days.”

“That substantial sum — dumped largely into TV ads this week and next — was prompted by recent private polling showing Masters closing on incumbent Mark Kelly (D) in a race that could help determine control of the upper chamber.”

ARIZONA GOVERNOR. “Arizona Republican Kari Lake hasn’t yet won her campaign for governor. But she is already offering her help to other Republican candidates across the country,” Politico reports.

“Lake is releasing video advertisements bolstering gubernatorial hopefuls Tudor Dixon of Michigan and Doug Mastriano of Pennsylvania — an unusual move for a first-time candidate still in the throes of a competitive race, but one that starkly illustrates Lake’s meteoric rise in the national party.”

“Rep. Liz Cheney (R-WY) is hitting the TV airwaves in Arizona on Friday, putting up a $500,000 ad buy targeting Kari Lake and Mark Finchem, the Republican candidates for Arizona governor and Secretary of State who have repeatedly said they would not have certified Joe Biden’s 2020 win in the state,” NBC News reports.

Says Cheney, in the ad: “I don’t know that I have ever voted for a Democrat, but if I lived in Arizona, I absolutely would.”

ILLINOIS UNION REFERENDUM. Illinois voters next month will decide the fate of Amendment 1, which needs at least 60% of the vote to pass in order to enshrine “the fundamental right to organize and to bargain collectively” into the state constitution. The State Journal-Register reports that the “yes” side took in $5.8 million during the third quarter, while conservative billionaire Richard Uihlein’s company is responsible for the entire $1 million the “no” forces brought in; Uihlein, who has emerged as one of the right’s most prolific donors in the country, threw down another $1 million last week.

CALIFORNIA BALLOT INITIATIVES. The two most expensive campaigns in the nation are competing sports betting referendums in California, but at least one appears to be about to fail with a whimper rather than a bang.

Democratic Gov. Gavin Newsom on Wednesday came out in opposition to Proposition 27, which would allow online sports betting, a move Politico described as “putting the final nail in a coffin that is already being lowered into the ground.” The governor did not say anything about the rival Prop. 26, which would legalize sports betting at Native American tribal casinos and racetracks.

A late September survey from UC Berkeley showed respondents rejecting Prop. 26, which is supported by several tribes, 42-31, while Prop. 27 was losing 53-27. A mid-October SurveyUSA poll, though, had Prop. 26 ahead 43-32, while Prop. 27 was failing 43-37. The CEO of DraftKings, which is Prop. 27’s main backer along with FanDuel, acknowledged around that time that the referendum was likely to go down, though he predicted it would do better in two years.

All of this comes after truly massive amounts of money have been spent. California election analyst Rob Pyers said Wednesday that a total of $462 million has been used to promote or beat each proposition, compared to the $423 million in independent expenditure that has been deployed in “63 targeted” House races.

The Public Policy Institute of California’s new survey finds respondents rejecting Proposition 30, a ballot measure that has turned into an expensive fight between Lyft and Democratic Gov. Gavin Newsom, by a 52-41 margin.

Last month PPIC showed Prop. 30, which would increase income taxes on those making about $2 million in order to fund “zero-emission vehicle purchases,” charging stations, and “wildfire-related activities,” ahead 55-40. However, those numbers were done before Newsom appeared in ads telling voters to reject “one company’s cynical scheme to grab a huge taxpayer-funded subsidy.” Lyft, for its part, has given $45 million to the “yes” side, while a number of wealthy donors are in opposition.

PPIC also finds two dueling sports-betting initiatives crashing and burning in what together has been the single most expensive campaign of the entire cycle. Prop. 26, which would legalize sports betting at Native American tribal casinos and racetracks, is down 57-34 while Prop. 27, which would allow online sports betting, is failing 67-26.

NORTH DAKOTA TERM LIMITS REFERENDUM. This fall, North Dakota voters will have the chance to impose term limits on their governor and state legislators, though it would be a while before they’d actually prevent anyone from running for re-election.

Measure 1 would only allow governors to be elected twice and would restrict legislators to eight years of service in each chamber starting in 2023. However, this initiative explicitly says, “Service as a member of the legislature or election to the office of governor before the effective date of this measure would not count towards an individual’s eight-year or two-election limit.” Two-term Gov. Doug Burgum, a Republican who would be allowed to seek re-election in 2024 no matter what happens, backs Measure 1, while GOP legislative leaders oppose it.

U.S. Term Limits, which backed a failed campaign here back in 1996, is the effort’s main financial backer, and it released an RMG Research survey in September showing “yes” up by a giant 81-13. On the other side, a state legislator complained in mid-October that his forces had “no money.” A number of local organizations, including state farm and chamber of commerce groups, are in opposition, but none appear to have contributed any funds to the effort.

NEW HAMPSHIRE U.S. SENATOR. New Hampshire U.S. Senate nominee Don Bolduc (R) repeated the baseless claims that children are identifying as cats and that schools were accommodating their demands to use litter boxes instead of toilets, American Independent reports.

Said Bolduc: “Identifying as a cat, hissing at other students, meowing during tests, licking themselves like cats do to clean themselves. Very, very disruptive behavior, very unnecessary behavior, and behavior that doesn’t belong in the classroom. And nobody can do anything about it. The teachers can’t do anything about it, everybody’s hands tied and they have to facilitate this type of behavior which detracts from the discipline required in a classroom, the regimentation required in a classroom, and people’s ability to learn. Very, very distracting.”