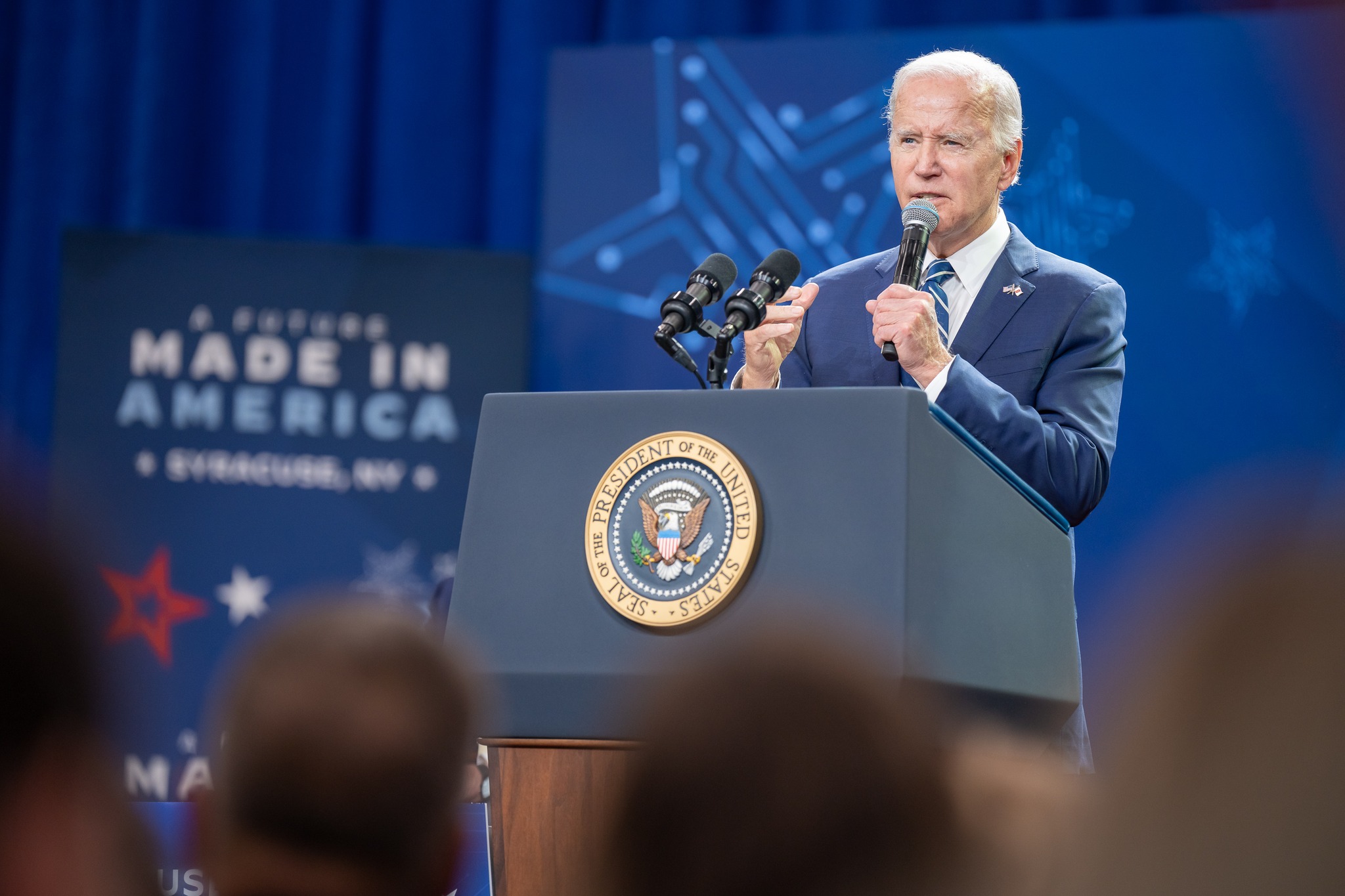 “The man who is alleged to have attacked Paul Pelosi, the husband of House Speaker Nancy Pelosi, in the couple’s San Francisco home had with him a bag that contained multiple zip ties, among other things,” CNN reports.

“The San Francisco Bay area man arrested in the attack on House Speaker Nancy Pelosi’s husband filled a blog a week before the incident with delusional thoughts, including that an invisible fairy attacked an acquaintance and sometimes appeared to him in the form of a bird, according to online writings under his name,” the Washington Post reports.

Hillary Clinton: “The Republican Party and its mouthpieces now regularly spread hate and deranged conspiracy theories. It is shocking, but not surprising, that violence is the result. As citizens, we must hold them accountable for their words and the actions that follow.”

“Elon Musk on Sunday gave credence to a fringe conspiracy theory about the violent attack on Paul Pelosi,” CNN reports.

“The new Twitter owner tweeted a link to an article full of baseless claims about Pelosi. The article was posted on a website that purports to be a news outlet.”

“Musk, who has 112 million followers on the platform he now owns, posted the baseless story about Pelosi in response to a tweet from Hilary Clinton at 8:15 am ET. He later deleted the tweet around 2 pm, but not before racking up more than 28,000 retweets and 100,000 likes.”

Said McDaniel: “Well, I think that’s unfair. I think this is a deranged individual. You can’t say people saying, ‘let’s fire Pelosi’ or ‘let’s take back the House’ is saying ‘go do violence.’ It’s just unfair.”

She added: “And I think we all need to recognize violence is up across the board.”

The Economist: “Although the attempt to assassinate Mrs Pelosi may have been amateurish, it would be a mistake to dismiss it as an outlier incident committed by a deranged man. As American politics have grown more feverish, the number of near-misses has been rising at a disturbing pace.”

“The United States called Russia’s announcement that it would withdraw from an agreement to allow the export of grain from Ukrainian ports ‘outrageous’ on Saturday and said Moscow was using food as a weapon,” the New York Times reports.

Gallup: “Americans are more likely now than at any time over the past five decades to say there is more crime in their local area than there was a year ago. The 56% of U.S. adults who report an increase in crime where they live marks a five-percentage-point uptick since last year and is the highest by two points in Gallup’s trend dating back to 1972.”

Semafor: “Not coincidentally, Gallup found the increase in perceived crime was driven by a major shift among Republicans —73% said local crime was up last year, versus 51% of independents and 42% of Democrats, whose views have barely moved over the last two years.”

A new Pew Research poll finds that 45% of Americans say the United States should be a “Christian nation.”

But Olivier Knox notes that means different things to people:

28% want the federal government to declare the country a Christian nation, while 52% say the government should never declare an official religion.

39% say the federal government should enforce separation of church and state, while 31% say it should stop enforcing it.

“A federal judge has ordered the organization behind a unionization drive at Starbucks  stores in western New York to turn over all of its messages with journalists — a sweeping and unusual ruling that will let the company peek into communications that courts usually view as private and protected,” the Washington Post reports.

“U.S. District Court Judge John L. Sinatra Jr. issued the little-noticed order last month at the behest of Starbucks, which has been aggressively fighting the organizing effort by an employee group called Starbucks Workers United in the Buffalo area for months.”

“Federal prosecutors scored the conviction of Steve Bannon associate Timothy Shea on their second try on Friday, as a jury found him guilty on all charges in the We Build the Wall fraud case,” Law & Crime reports.

“Details of the plea emerged in a pretrial hearing as the government ratchets up pressure against Tarrio and four other defendants who face trial in December on a charge of seditious conspiracy.”

Axios: “The Supreme Court said in 2003 that colleges and universities could consider race as a factor when deciding which students to admit, for the sake of building a diverse student body. But now, the much more conservative court appears to be changing its mind.”

“The court is set to hear oral arguments this week over the admissions processes at Harvard and the University of North Carolina, both of which give a little extra weight to applicants who come from certain underrepresented groups.”

“Life is full of surprises, but the court has sent just about every conceivable signal that it’s likely to put a stop to those sorts of policies.”

“Brazilians cast their ballots Sunday in what political scientists see as the country’s most consequential election in decades—a choice between President Jair Bolsonaro and his leftist rival, Luiz Inácio Lula da Silva, that will have widespread implications for Latin America’s biggest economy and the Amazon rainforest,” the Wall Street Journal reports.

New York Times: “The choice for Brazilians is whether to give President Jair Bolsonaro a second term, emboldening and empowering him to carry out a far-right mandate for the nation, or whether to bring back former President Luiz Inácio Lula da Silva and return Brazil to a leftist track.”

“Yet the stakes are far higher than simply a contest between the left and the right.”

Sen. Lindsey Graham (R-S.C.) “has sought to build consensus around federal legislation that restricts access to abortion after 15 weeks of pregnancy, except for in cases of rape, incest and life of the mother, that he and prominent anti-abortion activists say can serve as a framework for the party’s varied coalition of voters, lawmakers and prospective presidential candidates,” USA Today reports.

Said Graham: “If you’re running for president as a Republican in 2024, it’s not enough in my view to attack extremism Democrats on abortion. You need to lay out for the country where you would be as president.”

He added: “There’ll be some running for office in 2024, for president, that probably would want to be more restrictive. I understand that. But I’m hoping this becomes the consensus position, because it puts us in line with the majority of Americans on a very difficult topic.”

Texas Tribune: “At one point, churches fretted over losing their tax-exempt status for even unintentional missteps. But the IRS has largely abdicated its enforcement responsibilities as churches have become more brazen.”

“In fact, the number of apparent violations found by ProPublica and the Tribune, and confirmed by three nonprofit tax law experts, are greater than the total number of churches the federal agency has investigated for intervening in political campaigns over the past decade, according to records obtained by the news organizations.”

“Donald Trump’s lawyers will be in a New York state of mind this week, when they’ll argue on behalf of the former president and his company before state judges in three courthouses within the city limits,” Insider reports.

“The 20 richest tech billionaires have collectively lost nearly half a trillion dollars this year amid the stock market’s sharp tumble, a loss of wealth that is more than the market values of all but seven companies in the S&P 500,” the Wall Street Journal reports.

Dave Weigel: “For a long time, Republicans thought they had to choose one of two options: Restrict legal immigration… or appeal to non-white voters, who’d be turned off by a hardline immigration position.”

“It is clearer than ever that Republicans don’t have to choose, and some of the candidates who excite the party the most are non-white conservatives who can argue against liberal race and immigration policy while laughing at accusations that they’re ‘racist.’”

New York Post on Republican opposition to Republican House campaign chairman Tom Emmer: “Emmer’s opponents say his work about a decade ago as national traveling spokesman for the National Popular Vote initiative casts doubt on his suitability for the role of rallying opposition to President Biden’s agenda.”

“Emmer has disavowed his past position on the Electoral College.”

Roger Stone warned Florida Gov. Ron DeSantis (R) that it would be “treachery” to run against Trump for the 2024 Republican presidential nomination, the HuffPost reports.  He added it would be the “most stunning act of ingratitude and treachery in the history of American politics.”

“I have served under four presidents as speaker or leader. I served with many leaders on the Republican side. Unfortunately, that gentleman is the least substantive person. There is nothing of substance there.”— Speaker Nancy Pelosi (D-CA), talking to the Los Angeles Times about Rep, Kevin McCarthy (R+CA).

Former Rep. J.C. Watts (R-OK) said the RNC’s dismissal of January 6 as “normal political discourse” shows the depth to which the party has fallen during the Trump era, the Washington Examiner reports.

Said Watts: “I just think it tells you how far from where we are when the Republican Party chairwoman says that Jan. 6 was ‘normal political discourse.’ If there’s any Republican or any Democrat or any independent who believes that, then God help us.”