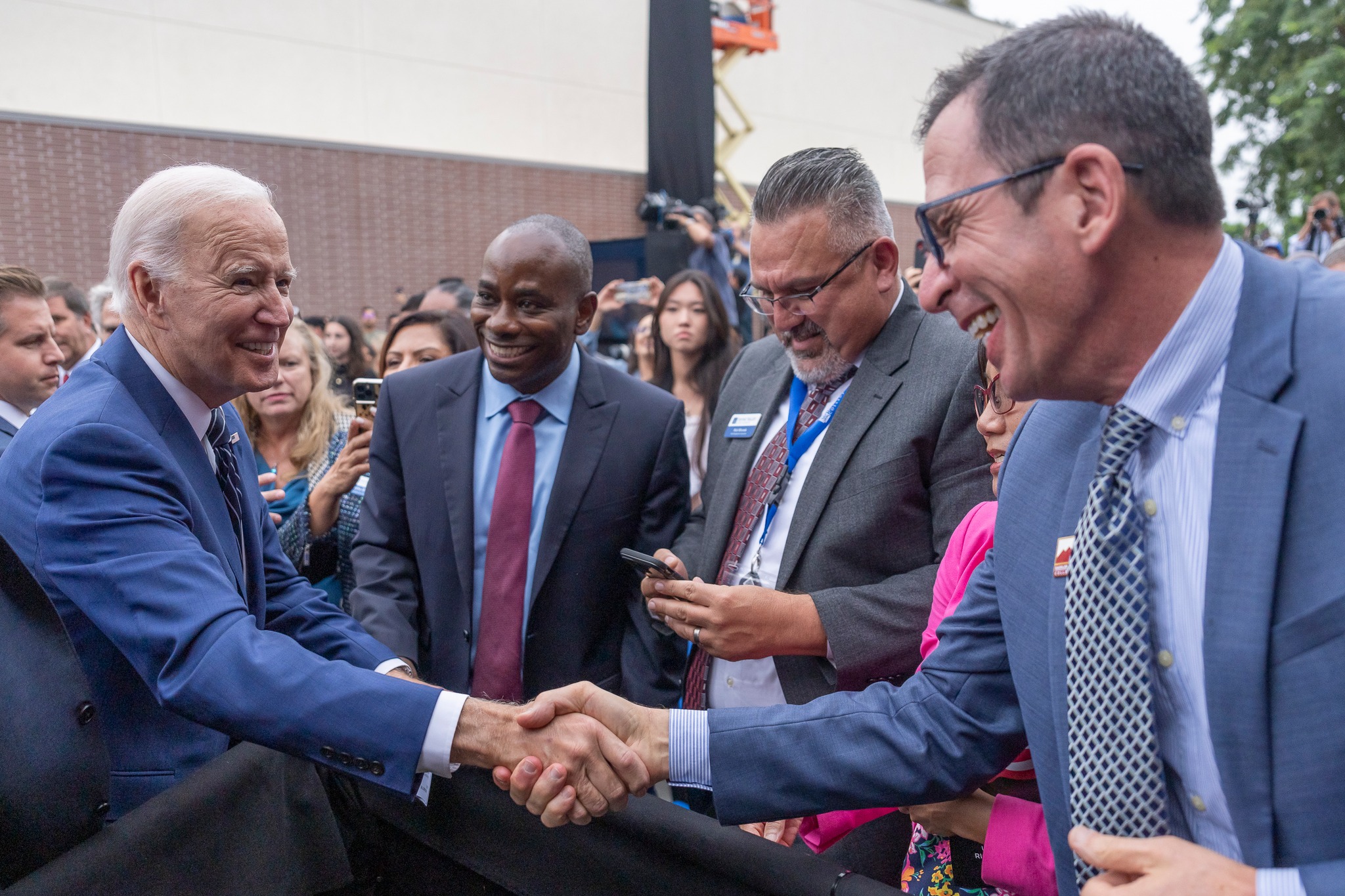 “Less than three weeks before Election Day, voter interest has now reached an all-time high for a midterm election, with a majority of registered voters saying that this election is ‘more important’ to them than past midterms,” a NBC News poll finds.

“What’s more, some 80% of Democrats and Republicans believe the political opposition poses a threat that, if not stopped, will destroy America as we know it.”

“And two-thirds of reliable Democratic and Republican voters say they’d still support their party’s political candidate, even if that person had a moral failing that wasn’t consistent with their own values.”

“The liberal Navigator public tracking poll flashed a major warning sign for Democrats in mid-October, reporting a 20 percentage point jump since September in the share of independent voters concerned about the economy and gas prices,” the Washington Post reports.

“That was not the only data showing a turning of the tide in the battle for Congress. Regional challenges had shown up in internal Democratic polls from deep blue sanctums in the Pacific Northwest, New York and even Rhode Island, Democratic strategists say. Crime, a major focus of Republican advertising, has also risen as a major issue in several races.”

“Candidates say they have felt the ground shift.”

“But more concerning for Democrats — with just 18 days to go before the election — is that the Republican advantage grows to 6 points, 53% to 47%, among all likely voters who live in the battleground states of Arizona, Florida, Georgia, Ohio, North Carolina, Nevada, Pennsylvania and Wisconsin.”

“Americans trust that Republicans would do a better job on a key set of issues, with across-the-board, double-digit edges on inflation, the economy, gas prices and crime,” according to a new ABC News/Ipsos poll.

“Broadly considering the state of the economy, 36% of Americans trust Republicans to do a better job while 24% trust Democrats – a potentially grim tell for the left, who currently cling to razor-thin majorities in the House and Senate.”

“Days into early voting in the 2022 midterm elections, states across the country have seen a surge of voters casting ballots at in-person voting sites and by mail, the latest sign that the 2020 election ushered in a transformation in the way Americans vote,” the New York Times reports.

“Election experts say the signs suggest overall turnout will be strong. But they are quick to caution that it is still early in the voting calendar — many states are less than a week in and some have not started. With voters’ behaviors so clearly changed by pandemic-era rules, it is unclear whether this rush to vote will lead to record-breaking totals after Election Day on Nov. 8.”

“Still, one significant shift in how American elections are conducted has become clear: Election Day has become, and will most likely always be, election month.”

“Pollsters this year are taking a range of steps to try to improve the accuracy of their surveys, after significantly understating support for Donald Trump and other GOP candidates in the past two presidential elections,” the Wall Street Journal reports.

“Whether those steps will work is a subject of concern for pollsters and strategists in both parties—and no one will know the level of accuracy of this year’s surveys until the votes are counted.”

Washington Post: “Ticket-splitters, on the decline for years as the country has grown ever more polarized, could be pivotal this year in several key battlegrounds, according to public polls, which show conspicuous gaps in performance between gubernatorial and Senate candidates of the same party.”

“Republicans and Democrats are both fighting for these voters in the final weeks of the election, appealing to moderation and sometimes distancing themselves from their party’s other pick at the top of the ticket rather than working together.”

New York Times: “Voter-profiling systems like the Covid-19 scores may be invisible to most people. But they provide a glimpse into a vast voter data-mining ecosystem in the United States involving dozens of political consulting, analytics, media, marketing and advertising software companies.”

“In the run-up to the midterm elections next month, campaigns are tapping a host of different scores and using them to create castes of their most desirable voters. There are ‘gun owner,’ ‘pro-choice’ and ‘Trump 2024’ scores, which cover everyday politics. There are also voter rankings on hot-button issues — a ‘racial resentment’ score, for example, and a ‘trans athletes should not participate’ score. There’s even a ‘U.F.O.s distrust government’ score.”

“Campaign and media consultants say such political-issue scores make it easier for candidates to surgically target messages to, and mobilize, the most receptive voters.”

“It’s an article of faith among Democrats that their party is deeply hampered by its inability or unwillingness to tout its own accomplishments,” Politico reports.

“But what if that conventional wisdom wasn’t just wrong but terribly, harmfully so?”

“That’s the warning being issued by one of the party’s most seasoned pollsters, Stan Greenberg. In memos, private communications and interviews, Greenberg has been imploring the party to — let’s put this bluntly — shut the hell up about all the work it’s done. It’s not that voters don’t care. He says voters actively turn against Democrats when they hear it.”

Said Greenberg: “It’s our worst performing message. I’ve tested it. I did Biden’s exact words, his exact speech. And that’s the test where we lost all of our leads… It said to the voters that this election is about my accomplishments as a leader and not about the challenges you’re experiencing.”

Dan Guild: “Historically, in-power incumbents outperform the sitting president’s job approval. This trend is continuing in 2022, and the average of this outperformance is consistent with recent history. On average, Democratic Senate incumbents are running 6.4 percentage points ahead of Biden’s current approval rating.”

“Democrats in 4 open seats previously held by Republicans are currently outperforming President Biden’s job approval by 3.5%. This is the highest an in-party has exceeded the president’s approval rating since at least 2006.”

“There are obvious signs in the data that GOP candidate quality is hampering their candidates in a number of key Senate races.”

President Biden said Friday that while he has not made a formal decision about running for reelection in 2024, it is his “intention” to do so, CNN reports.

Said Biden: “The reason I’m not making a judgment about formally running or not running, once I make that judgment, a whole series of regulations kick in and I have to be – I treat myself as a candidate from that moment on. I have not made that formal decision, but it’s my intention – my intention to run again. And we have time to make that decision.”

Donald Trump warned members of his former administration in a Fox News Radio interview that it would be “very disloyal” for any of them to run against him in 2024.

Said Trump: “Well, many of them have said they would never run if I run. So, we’ll see whether or not that turns out to be true. I think it’d be very disloyal if they did, but that’s okay too. And the polls have me leading by 40, 50 points.”

“I ran twice. I won twice. I did much better the second time than I did before. And now in order to make our country successful, safe and glorious again, I will probably have to do it again.”— Donald Trump, quoted by The Hill.

“A report in the Atlanta Journal-Constitution last month stirred excitement among Donald Trump’s fans in Georgia that the former president would return to the state for a rally to help his friend Herschel Walker’s Senate bid,” the Washington Post reports.

“It also set off alarm among Republican leadership in a state that Trump lost in 2020. Many were wary of reopening the old feud between Trump and Republican Gov. Brian Kemp, who is also on the ballot. Others were concerned that Trump’s continued talk of rigged elections could depress turnout.”

“A subsequent phone call between Trump’s team and the Walker campaign focused on the best time and place for a third Trump visit to Georgia this election cycle… While no final decision has been made, the proposed date came and went last month with no Trump event.”