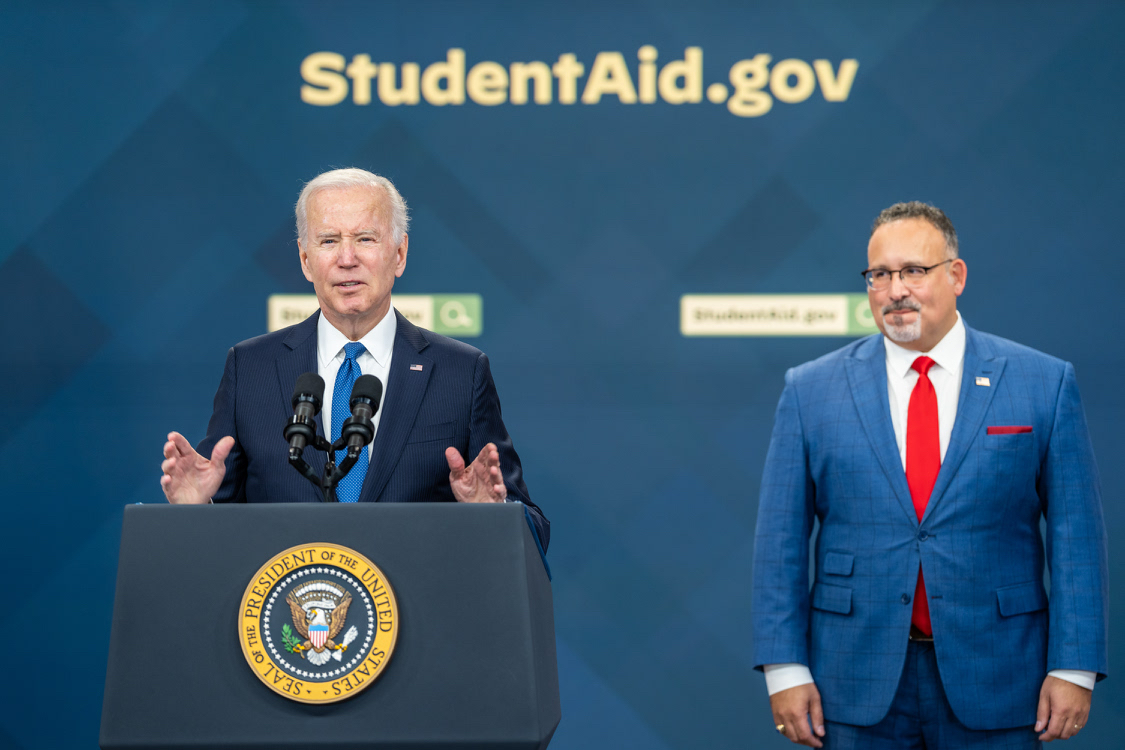 President Biden “took off the gloves Friday in a speech pummeling Republican lawmakers who backed massive federal subsidies for business owners, including themselves, during COVID-19 but are now complaining about his student debt forgiveness program,” the HuffPost reports.

Said Biden: “Who in the hell do they think they are?”

He added: “I don’t want to hear it from MAGA Republicans who had hundreds of thousands of dollars of debts, even millions of dollars, in pandemic relief loans forgiven, who are now attacking me for helping working-class and middle-class Americans.”

“President Biden warned on Friday that Republicans could upend legislative victories achieved under his administration and a Democratic Congress if the G.O.P. were to win control of Congress in November’s midterm elections,” the New York Times reports,

“President Biden said he wouldn’t support efforts to eliminate the debt ceiling altogether, in the face of Republicans’ calls to use it as leverage to cut government spending if they take control of the House in the midterms,” the Wall Street Journal reports.

When asked if he supported a permanent repeal of the debt limit, Biden said: “No. That would be irresponsible.”

However, Politico reports Biden also saying: “They will crash the economy next year by threatening the full faith and credit of the United States — for the first time in our history putting the United States in default — unless we yield to their demand to cut Social Security and Medicare. Let me be really clear: I will not yield. I will not cut Social Security. I will not cut Medicare, no matter how hard they work at it.”

Philip Bump: “The debt limit doesn’t do what a lot of people assume. It’s not a limit on spending but on paying for the spending that’s already been approved. The theory behind many debt-ceiling fights is that by capping the amount of debt that can be accrued, you’ll constrain spending by working backward.”

“But that’s not how it works in practice, as you can see below. Instead, Congress spends money at a deficit and the debt keeps growing higher to give it breathing room. The debt ceiling doesn’t affect the debt; the debt affects the debt ceiling.”

Donald Trump told Fox News Radio that Bob Woodward’s recordings of his multiple interviews with the former president, featured in Woodward’s upcoming audiobook, “belong” to Trump.  Said Trump: “We’ve already hired the lawyers to sue him.” LOL. He sues for everything. And this is not a thing. Recordings of his voice made during an interview by a journalist are not the possessions of the voice, but the possessions of the journalist making the recording, absent some sort of written contract stating otherwise.

“I realize now, two years later, all of the January 6 insurrection, leads me to the conclusion that he’s not just the wrong man for the job, but he’s dangerous, and he is a threat to democracy, and he’s a threat to the presidency, because he doesn’t understand the core obligations that come with that office.” — Bob Woodward, talking to CBS News about Donald Trump.

Bob Woodward: “In more than 50 years of reporting, I have never disclosed the raw interviews or full transcripts of my work. But after listening again to the 20 interviews I conducted with President Donald Trump during his last year as chief executive, I have decided to take the unusual step of releasing them. I was struck by how Trump pounded in my ears in a way the printed page cannot capture.”

Donald Trump announced at a Texas rally that he is going to “sue” within two weeks to snatch away Pulitzer Prizes from The Washington Post and New York Times for coverage of Russian interference in the 2016 presidential election.

“A packed legislative to-do list awaits Congress when it returns to session after the midterms – and Democrats, who currently control both chambers, will face a ticking clock to enact key priorities if Republicans win back the House or manage to flip the Senate in the upcoming elections,” CNN reports.

“Senate Majority Leader Chuck Schumer has predicted an ‘extremely busy’ lame duck session – the period of time after the midterms and before a new Congress begins in January.”

“With election day two weeks away, Republican prospects of taking control of the House of Representatives, already strong, appear to have solidified. Barring the unexpected, President Biden’s next two years will be shaped by challenges from a House led by some of his most zealous opponents,” the Los Angeles Times reports.

“That isn’t unusual; every president for the last four decades has contended with divided government. Sometimes, that has arguably been a good thing — a constructive check on executive power. Not now.”

“The House won’t merely be held by Republicans. It will be led by Republicans loyal to former President Trump, many of whom refuse to accept Biden’s legitimacy as president.”

New York Times: “Republican representatives have ratcheted up such rhetoric since former President Donald Trump took office, the analysis found. In the year and a half after the Jan. 6 Capitol riot, Republicans on average used divisive words and phrases more than twice as often as Democrats in tweets, and six times as often in emails to constituents.”

“At the forefront of this polarization are Republicans who voted to reject the Electoral College results that cemented Mr. Trump’s defeat last year. A recent Times investigation revealed how those lawmakers helped engrave the myth of a stolen election in party orthodoxy. Now, a Times analysis shows that the language of the 139 objecting members is markedly more hostile than that of other Republicans and Democrats. In their telling, those who oppose them not only are wrong about certain policies but also hate their country.”

CNN: “The national average stood at $3.85 a gallon Wednesday, down 2 cents from Tuesday and 7 cents in the last week. Much of that decline was driven by a steep price drop in western states, where prices had shot up to near record levels earlier this month.”

Gas Buddy forecasts declining gas prices across the country over the next couple of weeks.

Rep. Liz a Cheney (R-WY) predicted the rise of a “new Conservative Party” in 2024 in a NBC News interview.

Said Cheney: “The idea that the party is now no longer going to support the Ukrainian people. For somebody who has the picture of Ronald Reagan on his wall in his office in the Capitol, the notion that now Kevin McCarthy is going to make himself the leader of the pro-Putin wing of my party is just a stunning thing.”

She added: “It’s dangerous. He knows better. But the fact that he’s willing to go down the path of suggesting that America will no longer stand for freedom, I think tells you he’s willing to sacrifice everything for his own political gain.”

Rep. Liz Cheney (R-WY), vice chair of the House select committee investigating the Jan. 6, 2021 attack on the U.S. Capitol, said she will not allow former President Trump to turn his testimony before the panel “into a circus” by appearing on live television, The Hill reports.

Said Cheney: “This is a far too serious set of issues, and we’ve made clear exactly what his obligations are. And we are proceeding with that set out.”

“House Democrats have unified as they fight to retain their fragile majority in next month’s midterms. But if they lose, as many election prognosticators predict they will, that unity will likely be short-lived,” NBC News reports

“A Democratic defeat at the polls is expected to prompt rank-and-file members to push aggressively to replace the party’s Big Three — Speaker Nancy Pelosi, Majority Leader Steny Hoyer and Majority Whip Jim Clyburn, all octogenarians — with a new, younger generation of leaders.”

The Atlantic: “Because the Chinese Communist Party is among the world’s most secretive political organizations, China watchers jump on any new piece of information that might imply something about the country’s direction. Today, we were given an unexpected detail. In the middle of today’s session of the 20th Communist Party Congress, former General Secretary Hu Jintao was abruptly escorted off stage. Hu initially appeared to resist being moved, and two men pulled him up rather gruffly. China’s current leader, Xi Jinping, was sitting next to him and did not look surprised. The two exchanged some brief words before Hu’s exit.”

“Social media were soon abuzz with rumors based on little more than the body language in the video. In China, the public can discern very little about how senior leaders interact with each other, where they stand on policies, and how the decisions that matter are actually made. Outside observers have no clue—and likely never will—what really happened to Hu in that moment.”

“If we’re asking young people to fight and die for this country, I have to be willing to give up my career for the same cause. I’m surrounded by cowards.”— Rep. Adam Kinzinger (R-IL), quoted by The Hill.

Rep. Lauren Boebert (R-CO) called her unintentional reference to Joe Biden as “President Biden” a “Freudian slip,” apparently not knowing the expression is used to explain a subconscious desire.

“Conspiracy theorist Alex Jones has asked a Connecticut judge to throw out a nearly $1 billion verdict against him and order a new trial in a lawsuit by Sandy Hook families, who say they were subjected to harassment and threats from Jones’ lies about the 2012 Newtown school shooting,” the AP reports.

“The White House has engaged in talks with Elon Musk about the possibility of setting up SpaceX’s satellite internet service Starlink inside Iran,” CNN reports.

“The conversations come as the Biden administration searches for ways to support the Iranian protest movement that exploded just over a month ago after 22-year-old Mahsa Amini died under suspicious circumstances after being detained by the country’s morality police.”

The faculty senate at the University of Florida has planned a vote of “no confidence” in Sen. Ben Sasse (R-NE) as the university’s 13th president, KETV reports.  He’s currently the only finalist for the job, but the faculty senate said the next leader “should come already equipped to lead an institution of this caliber rather than aiming to learn on the job.”

“Tom Barrack, a onetime fundraiser for former President Donald Trump, will take the witness stand in his own defense in his trial on charges of being an illegal foreign agent for the United Arab Emirates,” Reuters reports.

Aaron Blake: “Eleven allies of and advisers to former president Donald Trump have been convicted or pleaded guilty in recent years, with their total sentences nearing 30 years of imprisonment.”

“Some of the crimes had nothing to do with Trump or these individuals’ service to him. But the total of their sentences, both realized and unrealized, is staggering. Those convicted include three top campaign officials, two top White House officials, two former business employees, several campaign and transition advisers and Trump’s longest-serving informal political adviser.”

“A Donald Trump supporter who brought two guns to the Capitol on Jan. 6, and dropped one of them on Capitol grounds, was sentenced to five years in federal prison on Friday,” NBC News reports.