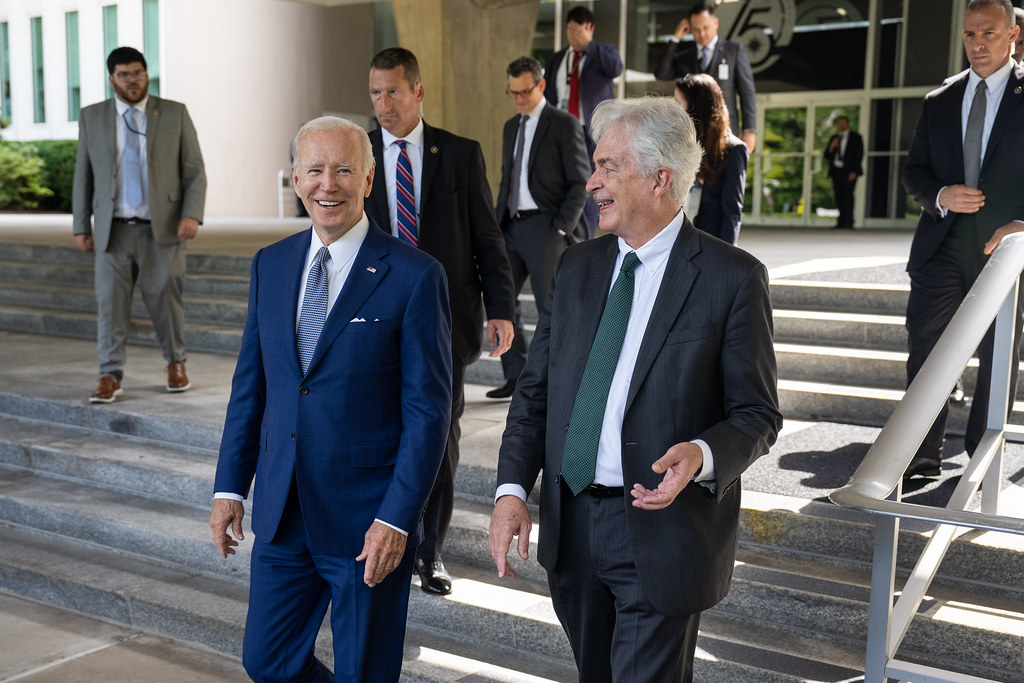 “Those caveats? The party that holds the presidency loses the vast majority of midterms, and the fundamentals — both President Biden’s approval rating and perceptions of the economy — still pointed to a tough 2022. What’s more, the polls have been off in recent elections (usually overestimating Democrats’ prospects when they are) — and what happens if and when Republican-oriented voters come home to candidates they might not love?”

“It appears to be happening. And those caveats now appear in effect, with the GOP’s chances of winning both chambers growing.”

Nate Silver: “If this was the stock market, you’d say ‘we’re officially into bear market territory’ for Democrats.”

Larry Sabato’s Crystal Ball: “There are some weird things going on out there. And there probably will be races that upset our expectations. If in fact Republicans end up doing better down the stretch, that’ll involve races where Democrats appear favored flipping to the GOP. But there are also some opportunities for Democrats to potentially play spoiler, or at least come closer than expected in certain places.”

“Those following the day-to-day churn of the polls could cherry-pick their way to telling very different stories about the election.”

Charlie Cook: “Why so many people offer such confident predictions about the Senate continues to baffle me. The possibility of a 50-50 Senate in the 118th Congress is very real, quite possibly the single most likely outcome.”

“The November election could yield 50 seats in the Republican column, 49 in the Democratic column, and another runoff in Georgia to determine control of the chamber.

“To the extent that Democrats have an edge in retaining the Senate, it just might be that the status quo works fine for them, with Vice President Kamala Harris in the presiding chair to break ties. Further, candidate quality matters so much more in the Senate than the House, the far more sensitive barometer of the national political climate.”

KENTUCKY ABORTION REFERENUM. The Cincinnati Enquirer reports that the campaign backing Amendment 2, a referendum that would amend Kentucky’s constitution to say that the state’s governing document does not “secure or protect a right to abortion or require the funding of abortion,” is spending $343,000 on its opening TV buy. The “no” side, which has outraised its opponents $3 million to $595,000 through Oct. 9, began airing spots weeks ago.

Yes for Life Kentucky’s commercial argues that the passage of the amendment “stops taxpayer-funded, late-term abortions,” which isn’t true. The legislature in 2017 banned abortions after 20 weeks, and Kentucky did not provide funding for abortions even before the procedure was all but outlawed this summer.

The state Supreme Court in September allowed that near-total ban to remain in force until it determines whether the law violates the state constitution. A hearing in the case is set for Nov. 15, but a win for Amendment 2 the week before would take the decision out of the justices’ hands. Should the amendment fail, however, the court could still rule in favor of the ban.

RHODE ISLAND 2ND CD. NBC writes that the NRCC has booked at least $800,000 as it attempts to flip this open seat.

William Saletan: “Let’s start with the good news: Most voters in these states don’t think the 2020 election was stolen. Two months ago in Pennsylvania, 49% of registered voters said ‘election officials in Pennsylvania correctly counted the state’s vote in the 2020 Presidential election’; 41% said they didn’t. In Arizona, 53% of voters said they were extremely or very confident that ‘the votes in Arizona were cast legitimately and counted accurately’; only 28% said they weren’t confident at all. Last month in Michigan, 54% of likely voters said ‘Joe Biden won the election fair and square’; only 35% chose the alternative answer, ‘Joe Biden and Democrats stole the election from Donald Trump.’ And in Wisconsin, 61% of voters said Biden was ‘the legitimate winner’; only 26% said Trump was the legitimate winner.”

“The bad news is that candidates who peddle the stolen-election myth are polling well above those numbers.”

“The Republican candidate for Maricopa Community College District Governing Board suspended his campaign after being arrested and accused of public sexual indecency earlier this month,” the Arizona Republic reports.

Matt Keefer, a school board candidate in Indiana who prides himself on being anti-“wokeness” and “indoctrination,” recently responded with this when a Facebook commenter asked him if he considered teaching kids that all Nazis are bad to be “indoctrination”: “All Nazis weren’t ‘bad’ as you specify. They did horrible things. They were in a group frenzy.”

And no, he won’t apologize because “haters gotta hate!”

Keefer doubled down on Facebook yesterday by insisting he was “correct.” But hey, “To be clear: I never was, am not now, and never will be a Nazi sympathizer.”

Weird how this keeps happening!

“The increasingly stark ideological divides of American politics have come with personal consequences,” according to a new New York Times/Siena College poll.  “Nearly one in five voters — 19 percent — said that politics had hurt their friendships or family relationships.”

A majority of voters across parties — 59% — say they see external politics influencing the Justice Department’s decision to prosecute federal crimes, according to a new Morning Consult/Politico poll.

Associated Press: “More than 150 years after slaves were freed in the U.S., voters in five states will soon decide whether to close loopholes that led to the proliferation of a different form of slavery — forced labor by people convicted of certain crimes.”

MASSACHUSETTS FAIR SHARE AMENDMENT. Suffolk University’s new poll for The Boston Globe, NBC10 Boston, and Telemundo shows a 58-37 majority in favor of the “millionaires tax” or “Fair Share Amendment,” which would increase taxes on personal income over $1 million in order to fund education and transportation projects. This proposed constitutional amendment, which is identified as Question 1 on the ballot, led by an identical 56-35 margin last month even though both sides have been spending huge amounts to sway voters.

MassINC’s new poll for the nonprofit Barr Foundation finds a 59-31 majority in favor of the “millionaires tax” or “Fair Share Amendment.