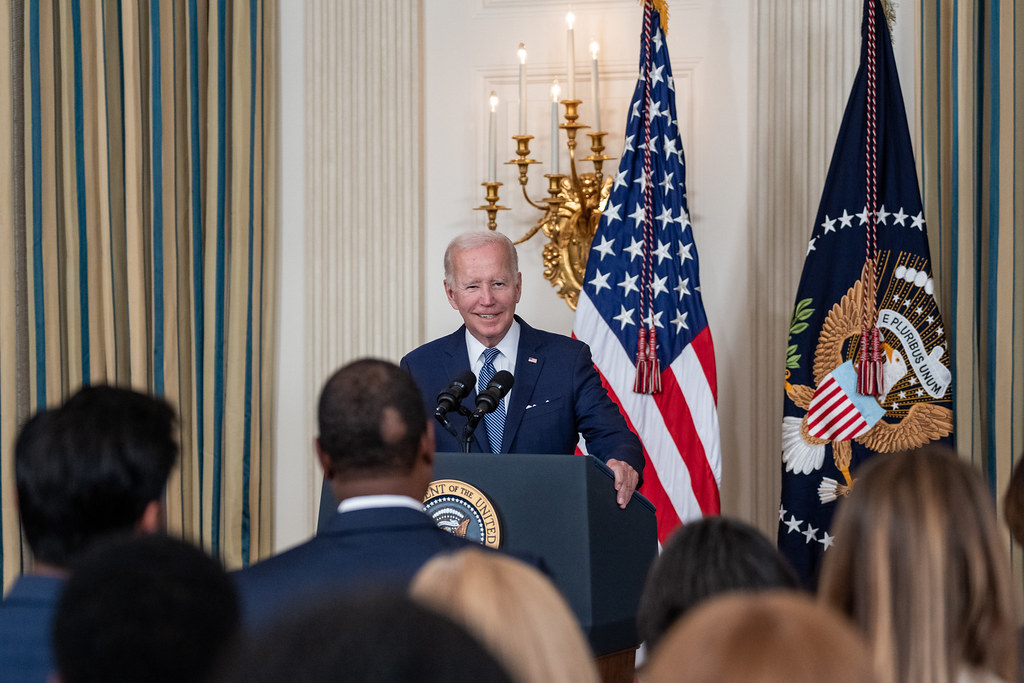 “Infusions of ad spending for GOP candidates and persistent voter anxiety over high inflation have brought new momentum to the Republican Party in House and Senate races, analysts say, just as early voting has begun for the midterm elections in many states,” the Wall Street Journal reports.

“A Democratic lead of about 2 percentage points on the generic ballot—the question of whether voters plan to back a Democrat or Republican for Congress—has been cut by more than half since late September, the FiveThirtyEight average of polling results finds.”

“Democratic leads in many Senate races have declined, according to aggregated polls, and Democratic candidates now trail in surveys in Wisconsin and Nevada, where they were once ahead. Control of both chambers hangs in the balance.”

David Wasserman: “I think Nate Silver, my friend and fellow prognosticator, asked the right question over the summer when he wondered whether this would be an asterisk election. Today, we’re somewhere between an asterisk year, in which there’s a minimal wave, and a classic midterm election, where Republicans do quite well. I think this is probably a Category 2 or 3 hurricane headed Democrats’ way, just not a Category 4 or 5.”

“Biden’s approval ratings have sucked all year. That hasn’t changed much. Democrats have come home a bit to him since Dobbs, gas prices have come down a little bit, and he’s been able to pass an agenda during an election year, which is impressive — but that’s only gotten him to between 42 and 43 percent. Historically, that’s still a very rough place to be.”

Blake Hounshell: “Here’s the thing about elections: When they break, they usually break in one direction. And right now, all the indicators on my political dashboard are blinking red — as in, toward Republicans.”

POLLING. A new Economist/YouGov poll finds President Biden’s job approval has fallen to 39% to 54%, a drop driven primarily by Democrats and Independents.

A new Monmouth poll shows Republicans maintain a slight edge in preference over Democrats for control of Congress, 49% to 45%. Key finding: “Perception of President Biden’s performance on bread-and-butter concerns is not helping the Democratic cause. Just 31% say he has been giving enough attention to issues that are most important to American families.”

Sen. Bernie Sanders (I-VT) “is planning an eight-state blitz with at least 19 events over the final two weekends before the midterm elections, looking to rally young voters and progressives as Democrats confront daunting national headwinds,” the New York Times reports.

Said Sanders: “It is about energizing our base and increasing voter turnout up and down the ballot. I am a little bit concerned that the energy level for young people, working-class people, is not as high as it should be. And I want to see what I can do about that.”

“Though candidates of the president’s party often try to distance themselves from him when they’re in tight races, Biden has been notably absent from competitive Senate and gubernatorial races in states including Georgia, Arizona, Nevada and North Carolina.”

The NRCC, after declaring Chen supported a “program reportedly funded and run by an arm of the Chinese Communist Party,” plays several clips of the Democrat saying, “China is … the best opportunity for our future generations to get a job … it’s to do business with China.” This western Orange County seat is home to a large Vietnamese electorate, and local Republicans have spent decades linking their opponents to communists.

The Los Angeles Times recently explained that Chen, who is a member of a local school board, voted over a decade ago to support the Confucius Institute, with the paper writing, “The Beijing-backed language and cultural learning centers were popular on campuses across the nation at the time but have drawn scrutiny in recent years and are now viewed as propaganda arms of the Chinese government.”

Chen’s campaign responded to the GOP offensive weeks ago by highlighting the fact that his grandmother fled China after the Communist Party took power and his own service in the U.S. Navy Reserves, though he doesn’t appear to have run any ads on the topic.

CALIFORNIA 47TH CD. The Congressional Leadership Fund is taking advantage of a leaked text conversation between Democratic Rep. Katie Porter and Irvine Mayor Farrah Khan where Porter expressed her anger at how the local police handled a fight that broke out after far-right hecklers disrupted her 2021 town hall, though CLF’s ad unsurprisingly simply makes it sound like the congresswoman just hates the police. “Porter called the Irvine police a ‘disgrace,'” bemoans the narrator.

Porter’s event last year was crashed by a group of self-described “American Nationalists” who shouted insults at the congresswoman, with one attendee telling the Orange County Register that they brought up her history as a domestic abuse survivor and yelled “some really horrible stuff about her kids.” Things later turned violent when a person named Julian Willis allegedly threw a punch at a heckler; the paper writes that Willis, who was cited afterwards, “reportedly has lived at Porter’s Irvine home, although it’s not clear if that is still the case.”

Porter afterwards texted Khan and told her she would “never trust” the Irvine Police again, saying, “Your police force is a disgrace.” Fox News reported the conversation last month, and local Democrats are still asking how the right-wing outlet obtained the messages in the first place. Khan has tweeted, “There were public records requests from CNN and Fox News for conversations between me, IPD, and the Congresswoman. I complied. I did not leak these.” The Voice of OC, though, writes that Irvine’s records department only released the texts days after Fox published them, so it couldn’t have obtained the conversations through these means.

Porter’s team responded to the initial Fox story by saying, “She was disappointed that despite our staff alerting police days before the event that the extremists were openly advertising their intention to disrupt the town hall, officers on the day of the incident were hundreds of feet away and did not intervene immediately when fighting broke out.” The statement said that, since that town hall, Porter and her office “have worked productively with the Irvine Police Department, including the Congresswoman hosting the new police chief in her office for a constructive and cooperative meeting.”

MONTANA 1ST CD. The super PAC Big Sky Voters is airing a commercial declaring that Republican Ryan Zinke “promised to build a park honoring veterans but focused instead on cutting a deal with private developers” and lied to investigators about the matter. The narrator continues, “As interior secretary, Zinke broke his promise to stay out of the Whitefish development deal, violating ethics rules.”

The spot uses materials from a government report released in February that concluded that Zinke violated federal ethics rules while in office by taking part in talks with developers about a project involving land owned by his foundation, the Great Northern Veterans Peace Park Foundation, and then lying about his involvement in the negotiations. The Department of Justice, though, decided not to prosecute him last year.

Cook Political Report: “Montana’s House seat has been Democrats’ white whale: since 1996, they’ve come within single digits of winning it five different times, most recently in 2018, but never succeeded.”

That’s very different from the last survey we saw, a late September UC Berkeley poll that showed Bass ahead 46-31. J. Wallin, though, did ask a few issues questions before the horeserace, including whether respondents felt more or less safe compared to a couple of years ago, that could have influenced the results.

The mayoral contest over the last week has been overshadowed by the fallout from a leaked conversation where then-City Council President Nury Martinez made bigoted comments against numerous groups to two colleagues and a labor official in a conversation where she also talked about using City Council redistricting to strengthen Latino representation and weaken their opponents. It remains to be seen just how this scandal will impact the race to lead America’s second-largest city.

Politico argued last week that Bass, who has a long history of working to unite Black and Latino residents, now has the chance to portray herself as someone who can help bridge the ugly racial fault lines that Martinez’s recording has put front and center. Caruso, for his part, has in turn insisted that all of this shows that “[w]e need a change of direction.”

FLORIDA 13TH CD. Florida Politics relays that Progress Pinellas, which is funded by Democrat Eric Lynn’s cousin, has dropped another $1.3 million to support his campaign.

NEW YORK 17TH CD. Punchbowl News reports that the Congressional Leadership Fund has booked another $4 million to target DCCC chair Sean Patrick Maloney in a lower Hudson Valley constituency that Biden would have won 54-44. CLF and the NRCC have already spent a total of $1.9 million through Monday to help Republican Assemblyman Mike Lawler, while neither the DCCC nor its allies at House Majority PAC have deployed anything yet for the incumbent.

WISCONSIN 3RD CD. While Axios reported last week that House Majority PAC has canceled its planned reservations, the NRCC isn’t acting like the race for this 51-47 Trump seat is over yet. The committee is launching its first spot against Democrat Brad Pfaff, which predictably accuses him of wanting higher taxes and more spending. The narrator thrice asks, “What the Pfaff?” which someone must have found funny somewhere.

ARIZONA 2ND CD. The DCCC is airing its first ad against Republican Eli Crane in the latest sign that Democratic Rep. Tom O’Halleran isn’t finished in this new 53-45 Trump constituency. The spot, which follows $1.7 million in spending by the conservative Congressional Leadership Fund, attacks Crane on abortion and declares he “promoted conspiracy theories spread by white supremacists, dividing America and threatening our democracy.” The second half of the commercial touts O’Halleran’s previous career as a police officer and praises him as “an independent voice for Arizona.”

NORTH CAROLINA 13TH CD. North Carolina congressional candidate Bo Hines (R) bemoaned the state of the economy in a recent interview: “I know in my household, my wife and I can’t afford to give up one month’s salary. We have bills to pay, we have rent to pay.”

But Insider reports the 27-year-old Republican upstart, backed by Donald Trump, reported having no salary at all, according to his certified personal financial disclosure.

A trust fund is the only reported asset in Hines’ financial disclosure.

“Our Hudson PAC, a group that formed in July to aid Rep. Sean Patrick Maloney (D-N.Y.) in his summertime primary, is the first Democratic outside spender to jump into his narrowing race against GOP state legislator Michael Lawler. Maloney’s newly redrawn district in the lower part of Hudson Valley has quickly become a top GOP target, with House Minority Leader Kevin McCarthy’s aligned super PAC dumping $4 million of broadcast TV ads into the race this week.”

PENCE 2024. “Mike Pence on Wednesday hinted at his own plans for 2024 as he dodged a question about voting for former President Trump in the next election,” The Hill reports.

Said Pence, with a smile: “Well, there might be somebody else I prefer more.”