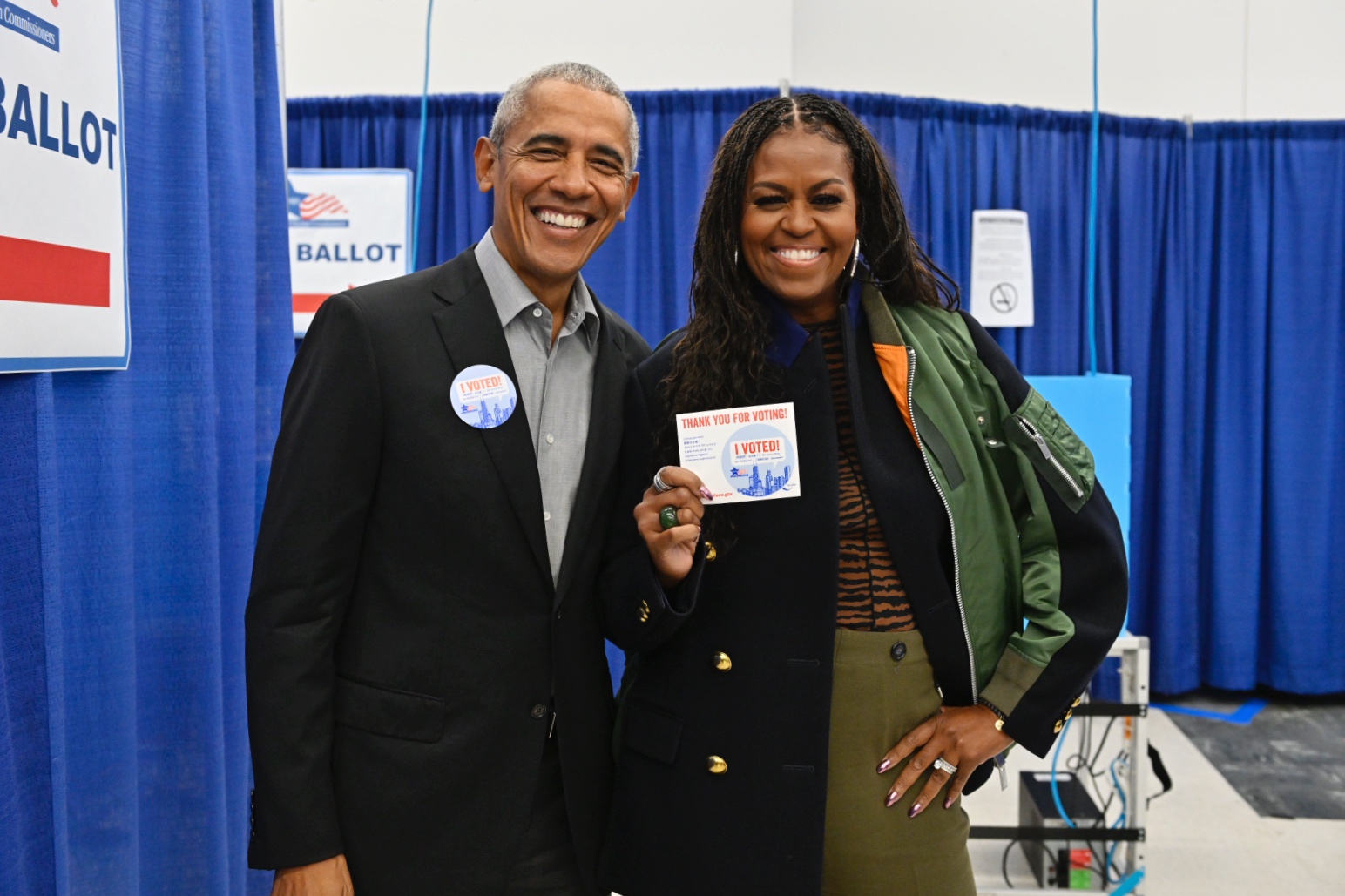 Associated Press: “Many swing-district Democrats elected four years ago were buoyed by college-educated, suburban voters, women and young people shunning Trump. That means many defeats for second-term House Democrats could be read as opposition to Trump no longer motivating voters in the same way — even though the former president could seek the White House again in 2024.”

“Voters overwhelmingly believe American democracy is under threat, but seem remarkably apathetic about that danger, with few calling it the nation’s most pressing problem,” according to a New York Times/Siena College poll.

“In fact, more than a third of independent voters and a smaller but noteworthy contingent of Democrats said they were open to supporting candidates who reject the legitimacy of the 2020 election, as they assigned greater urgency to their concerns about the economy than to fears about the fate of the country’s political system.”

A new Associated Press-NORC poll finds 71% of registered voters think the very future of the U.S. is at stake when they vote this year.

CBS News Battleground Tracker: “For two months the Democrats chipped away at the Republicans’ lead in the battle for House control, helped by motivated abortion-rights voters and what turned out to be fleeting glimmers of optimism about the economy.”

“But that momentum has stalled, at least for now, and the Republicans’ House lead has stabilized today at 224 seats to the Democrats’ 211. The Republicans’ lead had shrunk in the two previous model runs of September and August.”

A new Fox News survey asked which of two messages voters would send to the federal government: “Lend me a hand” or “Leave me alone.” A majority of 52% would ask Washington to lend them a hand, up from 44% in 2021. The eight-point increase comes mostly from a 19-point jump among Republicans as views among Democrats held steady.

ALASKA AT LARGE CD. “Campaign contributions are flooding in for Democratic Rep. Mary Peltola to keep the U.S. House seat she won in a special election this summer,” Alaska Public Media reports.

“Peltola raised $2.3 million in September, according to her latest campaign finance report, which covers just 24 days of last month. That brought her total contributions to $3.7 million.”

Democratic incumbent Mary Peltola is running a commercial where she talks about upholding the legacy of her late Republican predecessor, 49-year Rep. Don Young.

Peltola tells the audience how Young in the early 1980s gave the graduation speech in Tuntutuliak, a rural community where Alaska Natives make up almost the entire population, “and that proved to me that no community was too small or too remote to care about.” She continues, “And that was what was great about Don Young: He didn’t care if you were a Democrat, a Republican, or independent―he only cared about getting things done for Alaskans.”

Peltola’s family had a close relationship with Young for decades, with the Anchorage Daily News writing that her father worked with him when they were both teachers, while her mother campaigned for Young before he was elected in 1973. Last year, when Peltola testified before Young’s committee on fishing issues, the congressman himself recounted how the 3-month old Peltola accompanied her parents when they worked for his victorious House bid, saying, “I’ve always cherished that.” The new congresswoman, who has spent Thanksgiving with the Young family, hired his chief of staff to run her office after winning the August special election.x

New York Times: “For Abrams and Kemp, a Debate Rematch Recalls a 2018 Exchange”

PENNSYLVANIA 7TH CD. The DCCC is taking advantage of Doug Mastriano’s disastrous campaign for governor to tie Republican Lisa Scheller to her party’s standard bearer, a tactic the committee has also been using against Jeremy Shaffer at the other side of the commonwealth in the 17th District. The D-trip’s anti-Scheller spot uses a clip of Mastriano declaring, “My body, my choice is ridiculous nonsense” before the narrator faults her for campaigning with Mastriano.

CALIFORNIA 22ND CD. Republicans have aired ad after ad against Democrat Rudy Salas trying to link him to a 2017 state gas and vehicle registration tax to fund infrastructure and road repairs, and House Majority PAC is pushing back with a new ad that instead blames Republican incumbent David Valadao for high gas prices. The spot begins with a narrator declaring that Salas was “the only Democrat to vote against the gas tax increase.” He then blasts Valadao for “voting against cracking down on oil company price gouging” and taking contributions “from the oil and gas industry.”

FLORIDA 27TH CD. The GOP firm Cygnal, working on behalf of GOP Rep. Maria Elvira Salazar’s allies at Leadership for a Strong America, gives her a 50-44 edge over Democrat Annette Taddeo. The only other recent poll we’ve seen was a Taddeo internal from SEA Polling and Strategic Design that put the Democrat ahead 47-46.

COLORADO 3RD CD. Rep. Lauren Boebert (R-CO) “has emphatically denied allegations that she shot her neighbor’s dog and said the man who did was justified in killing the pet after it attacked several of her goats,” the Daily Mail reports.

ILLINOIS 17TH CD. The DCCC’s new ad against Esther Joy King accuses the Republican of having “lied about her business experience, said she ran several businesses. But there’s virtually no record they exist.” The spot goes on to show a clip of King saying, “I am unapologetically pro-life.”

The candidate, according to Kapos, said this was because it “was folded into another marketing firm that she helped start … which also has next-to-no presence online.” Politico added, “King also billed herself as founder of Flashbulb Media — another company that appears to be non-existent.”

HARRIS COUNTRY, TEXAS JUDGE. Campaign finance reports released last week show that Republican Alexandra del Moral Mealer outraised Democratic incumbent Lina Hidalgo $4.9 million to $1.5 million from July 1 to Sept. 29, while Hidalgo went into the final weeks with a small $2 million to $1.7 million cash-on-hand edge. The Houston Chronicle writes that this is a massive escalation from 2018, when Republican Judge Ed Emmett raised just $300,000 during this period ahead of his upset loss to Hidalgo. (In Texas, county judges are executive rather than judicial posts.)

AdImpact also relays that Mealer, who has received huge donations from local businessmen, has run nearly three times as many commercials as Hidalgo. Mealer has used her spots both to promote her career in the military and energy industry and to blame the Democrat for crime. Hidalgo, by contrast, has used her messaging to tie Mealer to Donald Trump and the Big Lie in a county that Joe Biden took 56-43, the best performance for a Democratic presidential nominee since Lyndon Johnson in 1964.

ARIZONA SECRETARY OF STATE and ATTORNEY GENERAL. The local GOP firm OH Predictive Insights shows Republican Mark Finchem leading Democrat Adrian Fontes 43-41 for secretary of state while his fellow election denier, Abraham Hamadeh, enjoys a similar 42-39 over Democrat Kris Mayes for attorney general. OH last month showed Finchem ahead 45-40, while it did not release numbers for the other contest.

Fontes and the state party, meanwhile, are running a new ad where Jason Van Tatenhove, a former Oath Keepers spokesman who has rejected his former colleagues, denounces Finchem’s ties to the far-right group. “I was a propagandist for the Oath Keepers,” Van Tatenhove tells the audience, “They’re the ones who stormed the Capitol … They brought explosives, military-grade weapons.” He continues by warning that Finchem “is a member of the Oath Keepers … the guy’s an election denier. He’s made it very clear the rule of law doesn’t matter to him.” Another spot features former Navajo County Sheriff K.C. Clark also warning about Finchem and the Oath Keepers.

Said Lee: “I stood against my party time and time again to oppose reckless spending. I will do it again and again and again. We need people who say no.”

New York Times: “No race in the country has spotlighted the events after the 2020 election quite so much as the Senate contest in Utah.”

At one point, Lee attacked McMullin for voting for Joe Biden in 2020. But McMullin deflected noting that Lee actually voted for McMullin for president in 2016.

“Democrats may face an uphill battle to keep their razor-thin House majority, but they are dominating the cash dash in the final months of the midterms,” Politico reports.

“Democratic candidates outraised their Republican opponents — in many cases by 2 to 1 margins — in 50 of the 65 most competitive House races in the third quarter of the year.”