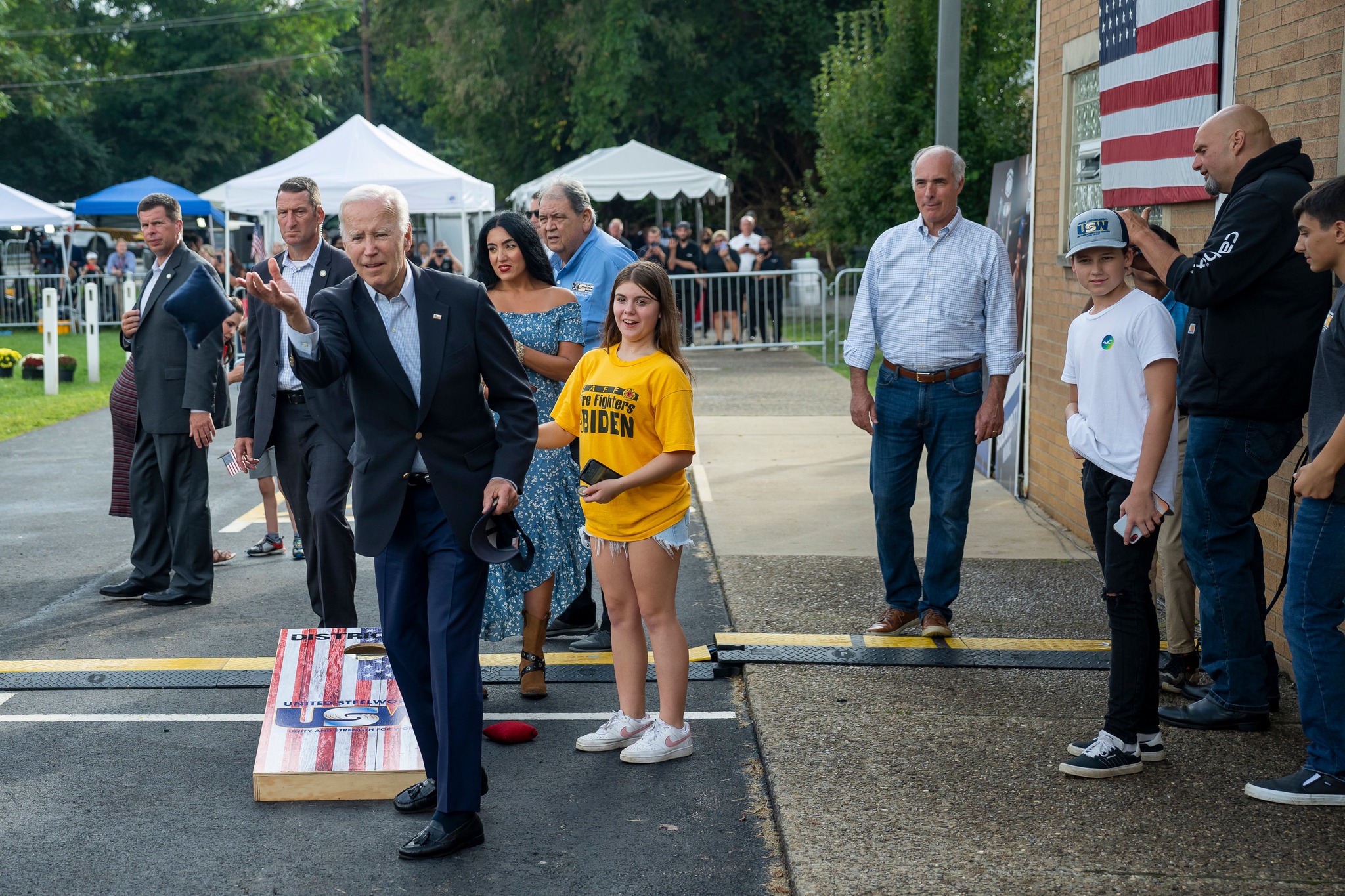 Washington Post: “It’s the same thread Thau has seen in focus groups all year. In six key battleground states — Arizona, Georgia, Florida, North Carolina, Pennsylvania and Wisconsin — he has asked 89 Trump-Biden voters the same question about how they would vote in a rematch, and just 13 would prefer the former president.”

“This independent-inclined group has grown quite sour on Biden and the Democrats, but they have little interest in returning to a Trump presidency and remain reluctant to support candidates in midterms who present themselves as mini-Trumps. And that may be the key to how candidates can win the election next month.”

GEORGIA U.S. SENATOR. “Since Herschel Walker launched his bid for Senate last year, Georgia voters have learned about his ex-wife’s allegations of domestic violence, his multiple children born out of wedlock and, most recently, assertions from a former girlfriend that he paid for one abortion and urged her to end a second pregnancy, while claiming to oppose abortion,” the New York Times reports.

“Mr. Walker, a former football star and first-time candidate, has denied the latest claim and expressed shock about what he has cast as a stunning partisan broadside. But some Republicans close to him were hardly surprised: They had been discussing the arrival of this moment with the candidate for months.”

If you missed tonight’s Senate debate in Georgia, the New York Times, Atlanta Journal Constitution, CNN and USA Today have the key takeaways.

“In his campaign to unseat Sen. Mark Kelly (D-AZ), Republican Blake Masters has consistently amplified skepticism and conspiracy theories surrounding the outcome of the 2020 presidential election,” the Daily Beast reports. “But during the final stretch of his own 2022 race, Masters is starting to cast doubt on the outcome of this election—before the votes are even counted.”

Said pollster Ann Selzer: “It says to me that Franken is running a competent campaign and has a shot to defeat the seemingly invincible Chuck Grassley — previously perceived to be invincible.”

This would be a remarkable upset, but remember that all pollsters — even those well-regarded like Ann Selzer — can have outliers.

Said Dixon: “Families look all different ways. They’re the ones telling me that on a regular basis, but apparently, they’re refusing to see one dynamic here. A lot of people want to have families. This state, we don’t have support from the governor for families unless they look exactly the way she wants.”

ARIZONA GOVERNOR. “Democratic Party strategists are watching Arizona’s Kari Lake with growing alarm,” Axios reports. “As some see it, Lake — a 2020 election denier — could easily win the state’s gubernatorial race and threaten its 2024 election processes. And with the talent she’s already displayed even as a political novice, they see her potential to soar to a vice presidential spot or a post-Trump presidential candidacy.”

“Of this year’s midterm elections slate of ‘ultra MAGA’ candidates, Lake has perhaps the best chance of winning.”

ILLINOIS SUPREME COURT. The conservative Citizens for Judicial Fairness, which has about $5.5 million to spend thanks to funding from conservative mega donor Ken Griffin, is airing an ad tying two Democratic candidates for the Illinois Supreme Court to former state House Speaker Mike Madigan, who remains the state GOP’s favorite foil almost two years since he involuntarily stepped down. (Madigan subsequently was indicted in March on 22 counts of racketeering and bribery.)

Rather than air separate ads against the two Democrats running in competitive races, 2nd District nominee Elizabeth Rochford and 3rd District contender Mary O’Brien, Citizens for Judicial Fairness opts to attack both at once. The offensive comes shortly after the Democratic group All for Justice unleashed its own $3 million buy that also went after their Republican rivals, Mark Curran and appointed Justice Michael Burke, with one ad. Democrats currently control the state Supreme Court 4-3, and they need to win at least one of these two contests to retain control.

Politico: “As Republicans’ biggest House super PAC floods the election with hundreds of millions of dollars, their Democratic counterparts have lagged far behind.” “The result is a shrinking battlefield for Democrats that has seen leadership and rank-and-file members alike pressuring the rest of their party, including Biden, to pony up more support in a bid to save the House majority. The anxiety is especially acute in southern Arizona, where retiring Democratic Rep. Ann Kirkpatrick has been lobbying her party to help Kirsten Engel, the Democratic nominee vying to replace her.”

Former President Barack Obama will head to Milwaukee on October 29 to bolster Democrats in the state, some of them in desperate need of a boost, NBC News reports.

The AP says Obama will also campaign in Michigan and Georgia.

“President Joe Biden and Vice President Kamala Harris will visit Philadelphia on Oct. 28 to boost Pennsylvania Democrats up and down the ticket as the state hosts some of the country’s most critical elections,” the Philadelphia Inquirer reports.

OHIO U.S. SENATOR. “A weekend fundraiser for Ohio U.S. Senate candidate J.D. Vance was abruptly canceled Friday after Spectrum News notified the Vance campaign it would report the host is one of several Ohio pain doctors cited in a lawsuit against Purdue Pharma and others for the amount of opioids they prescribed and the amount of money they received from major drug companies,” Spectrum News reports.

Rep. Ro Khanna (D-CA) “is paying a cadre of political consultants in the early presidential nominating states, which some say is a possible sign he’s exploring a presidential run as early as 2024,” Fox News reports.

“Khanna, a three-term California Democrat, has on his campaign payroll political consultants and strategists throughout the Northeast as well as in Iowa, Nevada and Colorado. The relationships were first disclosed on Friday in filings Khanna’s re-election campaign made with the Federal Election Commission.”

“We all know that he’s much more likely to lose the White House than anybody else running for president on our side of the aisle, so why would we want to go with that?”