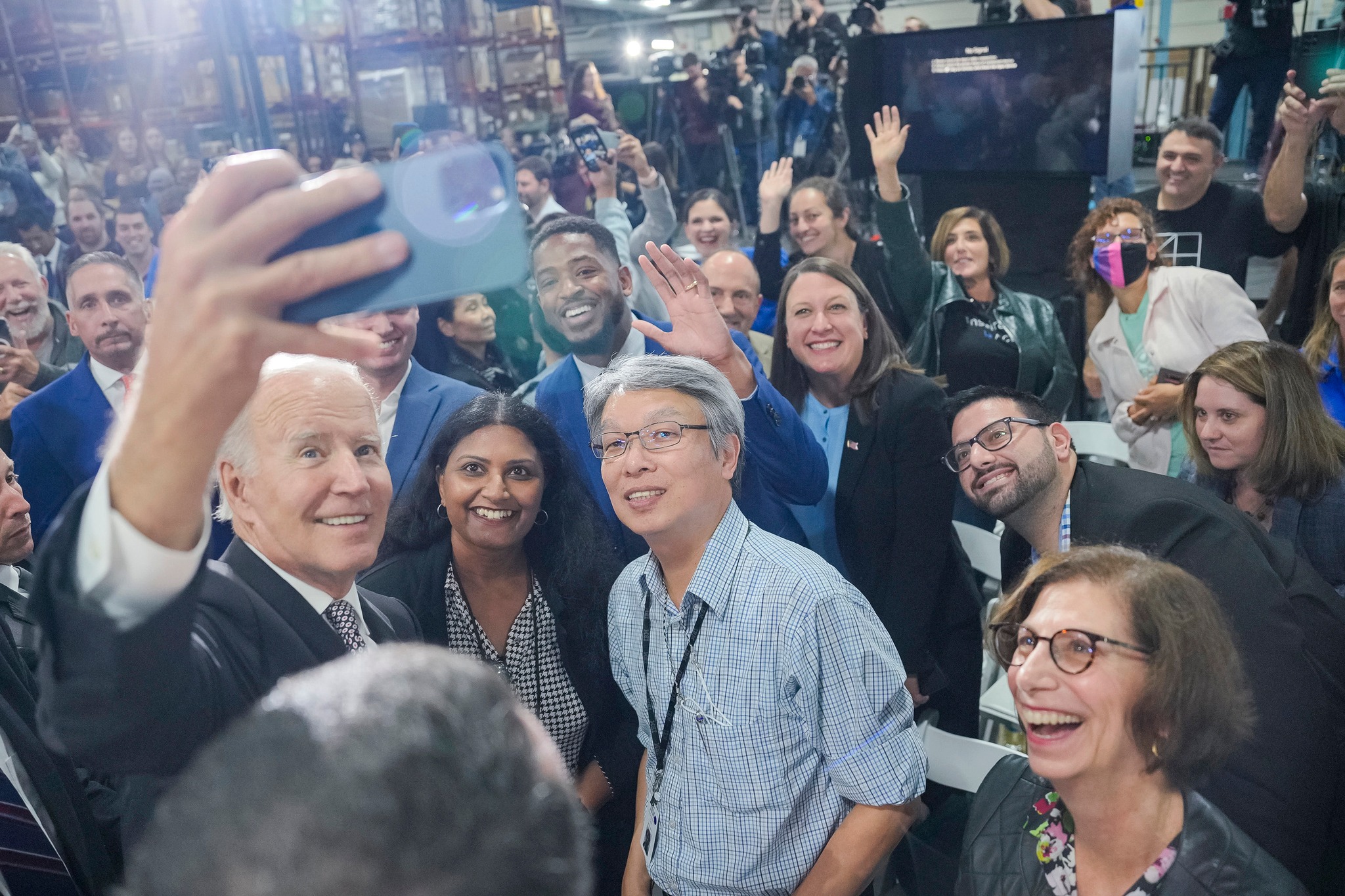 Dan Balz: “For much of this year, the political dynamics appeared to be the reverse of 2018 — a rebellion against Biden poised to eliminate Democrats’ slim majorities in the Senate and House. History alone suggested that. But the crosscurrents are more varied than they were four years ago. Earlier predictions of sweeping Republican gains have been tempered by the changing political climate, thanks in large part to the Dobbs decision, though the GOP remains favored to take control of the House. In the final weeks, with concerns about the economy still dominant, elections could turn on how much sustaining energy the Dobbs decision provides for Democrats or whether it fades in the face of bread-and-butter concerns.”

“Biden’s approval ratings remain well below 50 percent, though his average rating is not as low as it was a few months ago. Inflation continues at decades-high levels. Crime in major cities and some suburban areas is up. The influx of undocumented immigrants gnaws at many voters. All that continues to push toward Republican victories.”

“But the midterms are shaping up to be more than just a referendum on the president. Trump remains a central, and polarizing, figure at center stage. He continues to claim falsely the 2020 election was stolen and has remained in the news because of investigations into the Jan. 6, 2021, attack on the Capitol and his handling of classified documents. He maintains a tight grip on the GOP base and, as election deniers have won many GOP primaries this year, this Trumpian Republican Party is seen by many voters as a growing threat.”

Donald Trump’s newly-established super PAC, known as MAGA Inc, has begun to book ad time in several key Senate races, though we only have preliminary reports of how much it’s reserved so far. Here are where things stood as of Monday:

Philadelphia Inquirer: “There’s an instinct to think of undecided voters as politically engaged moderates wrestling with policy contrasts. That is almost never the case. Most are just not paying attention yet.”

With less than a month until Election Day, roughly half of registered voters say climate change is either “very important” or “one of the most important issues” in their vote for Congress, according to a recent Washington Post-ABC News poll.

However, climate change ranked below the six other issues tested in the poll, including the economy, abortion, crime and immigration.

David Byler: “If Biden’s net approval — the difference between his approval rating and his disapproval rating — were the only factor in the midterm elections, the Republicans would win the House by a healthy margin. But, instead, two strong political forces — voters’ discontent with Biden and their frustration with the GOP on abortion — are pushing against each other.”

“Voters still might start to blame Democrats for the economy and Biden’s policy disappointments, allowing the GOP to retake the lead before November. But for now, they’re letting Democrats distance themselves from Biden — and, at least momentarily, defy historical trends.”

Politico: “Immigration isn’t leapfrogging abortion or the economy on lists of voters’ top concerns in national polls and surveys in key battleground states. Spending on immigration-focused ads is up in Florida, Texas and Arizona… but not elsewhere.”

Hoggett is out with a tough new ad slamming Higgins for “putting a gun to his wife’s head, threatening her if she divorced him and refusing to pay child support for 17 years.”

Conole released these numbers days after Siena College found Williams ahead 45-40 as Zeldin prevailed 47-44 here. Biden would have taken this constituency, which includes the Syracuse and Utica areas, 53-45, but local voters are usually more friendly to Republicans downballot.

TEXAS 15TH CD and WISCONSIN 3RD CD. Axios reports that House Majority PAC plans to cancel the reservations it made to support Democrats Michelle Vallejo and Brad Pfaff in a pair of open seats that Trump would have carried, though it doesn’t appear to have withdrawn any money yet.

HMP may not actually need to cancel any ad time in Texas because the Harlingen media market forms most of the 15th and 34th Districts, so the super PAC could simply choose to run more commercials to help Democrat Vicente González in his incumbent vs. incumbent fight with Republican Mayra Flores. However, there are no other competitive races in Wisconsin for HMP to air any commercials in.

VIRGINIA 7TH CD. Former Rep. Denver Riggleman (R-VA) is going to bat for Rep. Abigail Spanberger (D-VA) in her competitive reelection bid in Virginia’s 7th District, appearing in a new TV ad urging voters to back the congresswoman for her willingness to work across the aisle, the Washington Post reports. Said Riggleman: “This is not a typical political ad. I’m a Republican congressman saying nice things about a Democrat.”

“If the sitting president decides to run, we are going to support him… But I think we need new leaders.”— Rep. Elisa Slotkin (D-MI), when asked by NBC News if President Biden should run for re-election.

CALIFORNIA 45TH CD. Republican Rep. Michelle Steel has debuted a commercial where she bemoans that China has “enormous power in America” and declares she’s “fighting to ban communist propaganda in our schools,” a missive that came days after she send out a Vietnamese-language mailer showing a bogus graphic of opponent Jay Chen teaching students about communism.

The Democrat was shown in front of a blackboard reading, “Jay Chen invited China into our children’s classes” in a classroom filled with pictures of Che Guevara, Ho Chi Minh, and Mao Zedong among others. Alongside those deceased communist figures were images of the Democratic donkey, the male and female gender symbols, and what the Los Angeles Times describes as a “drawing of a Black child standing on the highest pile of books to be at the same level as two white children, under the word ‘equity.'”

Chen responded by highlighting the fact that his grandmother fled China after the Communist Party took power and his own service in the U.S. Navy Reserves. “In the span of only a few days, Michelle Steel—who has never worn a military uniform—preyed upon generational trauma in the Vietnamese community,” said his campaign manager, adding that Steel “pushed a patently untrue narrative that a Taiwanese-American is affiliated with the Chinese Communist Party, and attempted to defile a decorated Navy veteran’s reputation and allegiance to the United States.”

FLORIDA 27TH CD. Democrat Annette Taddeo is out with a survey from SEA Polling that shows her edging out freshman Republican Rep. María Elvira Salazar 47-46 for a seat in the Miami area that Trump would have taken by a similarly tight 49.9-49.6. While this is the first poll we’ve seen here in over two months, Salazar’s allies at the Congressional Leadership Fund recently booked $2 million to defend her.

Washington Post: “Florida is emerging as a glaring warning for Democrats about what can happen if they do not aggressively court Hispanic voters in other states, some party strategists say.”

NEW YORK 12TH CD. The House Ethics Committee announced Friday that it was investigating Democratic Rep. Carolyn Maloney, who lost her primary to fellow incumbent Jerry Nadler in August, though it didn’t reveal any details. The body said it would “announce its course of action in this matter” by Nov. 21, which is less than a month-and-a-half before Maloney’s final term expires.

OHIO 9TH CD. Democratic Rep. Marcy Kaptur is airing a commercial attacking Republican J.R. Majewski for lying about serving in Afghanistan, an offensive that comes weeks after his allies at the NRCC canceled their planned spending. The ad features several clips highlighting how Air Force records contradict Majewski’s “claims on the campaign trail” before a narrator declares, “When he lies about his deployment, he disrespects everyone who’s proudly worn our nation’s uniform.”

G. Elliot Morris: “Over the weekend, a new series of charts appeared on the webpages of RealClearPolitics.com, the right-leaning news aggregation website that also hosts averages of polls for upcoming elections. These site has been publishing averages since the early 2000s, and while they used to be a pretty comprehensive and fair collection of polling data I should note that the people in charge have routinely made some very arbitrary methodological decisions that have tended to have the predictable effect of skewing their numbers toward Republicans. This is why I have advised people to take their numbers with a grain of salt.”

“But the site’s new set of featured graphs makes me question altogether their broader commitment to creating comprehensive and unbiased aggregates of polls.”

Politico: “Out of more than 5,800 distinct TV and digital ads since the Aug. 8 search of the former president’s Florida property, fewer than 20 mentioned Mar-a-Lago or the Justice Department… Abortion and the economy-related ads are dominating in swing districts, according to the advertising data.”

“TV watchers in most battlegrounds are getting bombarded with political ads. But one key group of candidates is missing from the airwaves in many states: Republican gubernatorial hopefuls,” Politico reports.  “Republicans in some of the most hotly contested gubernatorial battlegrounds are barely spending any money on television ads, if at all… And elsewhere, GOP candidates who are on the airwaves are nevertheless getting significantly outspent by Democratic opponents.”

“A lot of these consultants think if all we do is run abortion spots that will win for us. I don’t think so. It’s a good issue. But if you just sit there and they’re pummeling you on crime and pummeling you on the cost of living, you’ve got to be more aggressive than just yelling abortion every other word.” — James Carville, quoted by the Associated Press.