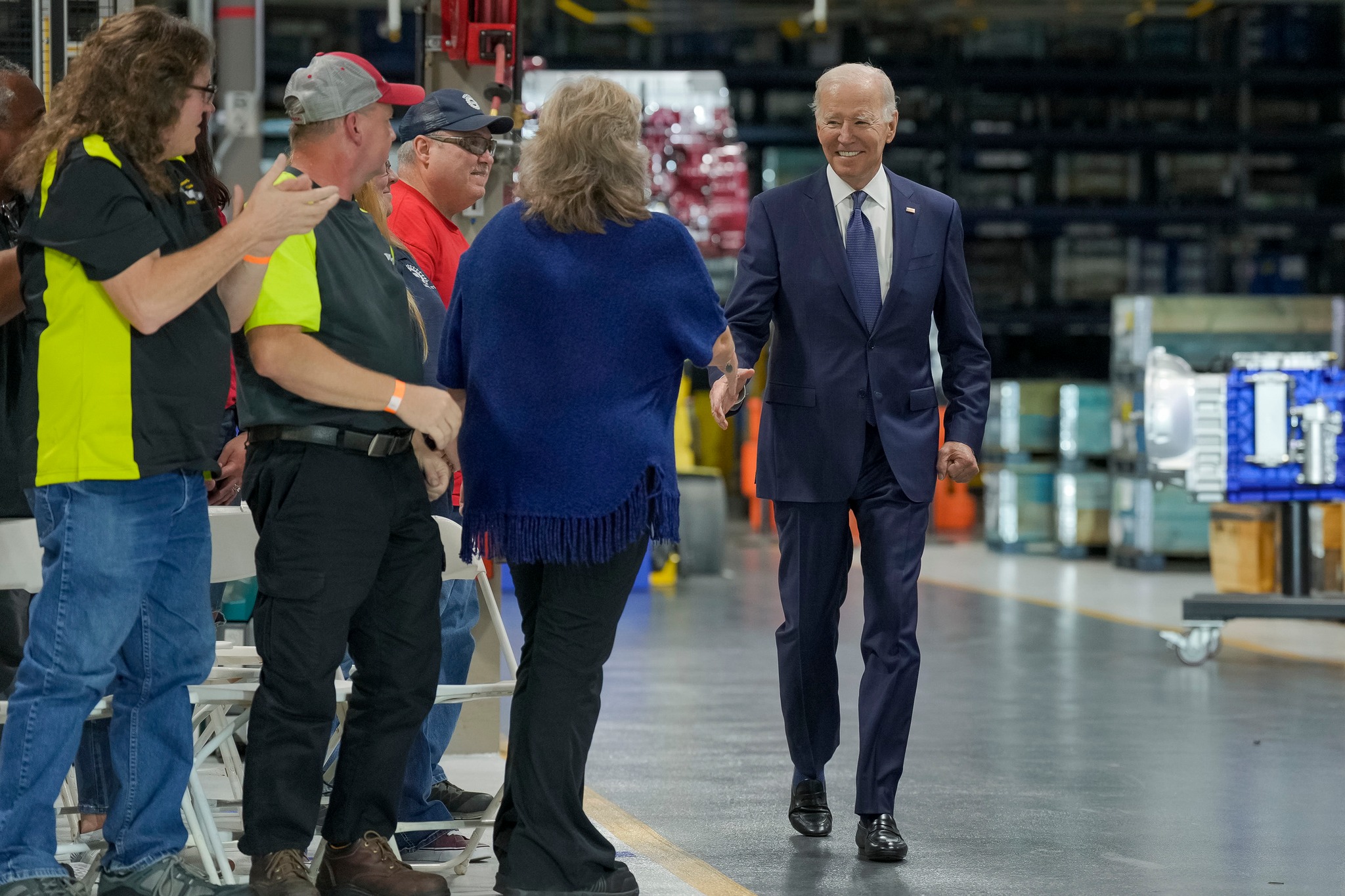 “Russia launched another barrage of missile strikes in Ukraine on Tuesday, hitting residential buildings in Zaporizhzhia and electrical infrastructure in Lviv,” Axios reports.

“A top British intelligence official will warn in a speech on Tuesday that while Russia’s aggression has created an urgent threat, China’s expanding use of technology to control dissent and its growing ability to attack satellite systems, control digital currencies and track individuals pose far deeper challenges for the West,” the New York Times reports.

“In an interview on Monday ahead of his address, the official, Jeremy Fleming, who heads GCHQ — the British electronic intelligence-gathering and cyber agency made famous for its role in breaking the Enigma codes in World War II — also said he was skeptical about how far China would go to support Russia’s aggression.”

“In little more than a month, the war in Ukraine has turned abruptly from a grueling, largely static artillery battle expected to last into the winter, to a rapidly escalating, multilevel conflict that has challenged the strategies of the United States, Ukraine and Russia,” the Washington Post reports.

“Russia’s launch of massive strikes on civilian infrastructure Monday in about a dozen Ukrainian cities far from the front lines brought shock and outrage.”

New York Times: With attacks on Ukraine, Putin gives hard-liners what they wanted.

“Russia’s military performance, the conditions of Russian equipment, and the dynamics of employment in Russia’s economy in the last decade suggest that – even in areas the Russian government prioritizes… like its military – not even minimal maintenance standards are being achieved nor the pay necessary to sustain a cadre of trained professionals.”

“We have seen a lot of threats to use nuclear weapons from Putin recently, but there are very good reasons for him to worry that if he tried to use a nuclear weapon it won’t work.”

“Elon Musk spoke directly with Russian President Vladimir Putin before tweeting a proposal to end the war in Ukraine that would have seen territory permanently ceded to Russia,” Vice News reports.

“The Supreme Court on Tuesday turned away a Black death row inmate’s appeal over claims he did not receive a fair trial because several jurors had expressed opposition to interracial relationships,” NBC News reports.

“The conservative majority court’s decision not to hear the case, over the dissent of the court’s three liberal justices, leaves in place Andre Thomas’s conviction and death sentence.”

“The Supreme Court declined on Tuesday to wade into the so-called fetal personhood debate, deciding not to take up a case out of Rhode Island over whether fetuses should have constitutional rights,” CNN reports.

“The Biden administration published a sweeping set of export controls on Friday, including a measure to cut China off from certain semiconductor chips made anywhere in the world with U.S. equipment, vastly expanding its reach in its bid to slow Beijing’s technological and military advances,” Reuters reports.

New York Times: “Technology experts said the rules appeared to impose the broadest export controls issued in a decade. While similar to the Trump administration’s crackdown on the telecom giant Huawei, the new rules are far wider in scope, affecting dozens of Chinese firms. And unlike the Trump administration’s approach — which was viewed as aggressive but scattershot — the rules appear to establish a more comprehensive policy that will stop cutting-edge exports to a range of Chinese technology companies and cut off China’s nascent ability to produce advanced chips itself.”

Ben Thompson: “First, in case there was any question, it is clear that China is being viewed as an adversary, and that that view is a bipartisan one. Any tech company with business in China would do well to note that any further investments are fraught with risk, and previous investments need to be diversified sooner rather than later.”

“President Biden is re-evaluating the relationship with Saudi Arabia after it teamed up with Russia to cut oil production in a move that bolstered President Vladimir Putin’s government and could raise American gasoline prices just before midterm elections,” the New York Times reports.

“Days before a major oil-production cut by OPEC and its Russia-led allies, U.S. officials called their counterparts in Saudi Arabia and other big Gulf producers with an urgent appeal—delay the decision for another month, according to people familiar with the talks. The answer: a resounding no,” the Wall Street Journal reports.

“U.S. officials warned Saudi leaders that a cut would be viewed as a clear choice by Riyadh to side with Russia in the Ukraine war and that the move would weaken already-waning support in Washington for the kingdom.”

“The new details show that the governor’s office appears to have misled the public and the state legislature and may also have violated Florida law. DeSantis aides worked behind the scenes with an attorney who serves as the national GOP’s top redistricting lawyer and other consultants tied to the national party apparatus.” A former state Supreme Court chief justice calls it “significant evidence of a violation of the constitutional amendment.”

Franklin Foer: “I have been observing Garland closely for months. I’ve talked to his closest friends and most loyal former clerks and deputies. I’ve carefully studied his record. I’ve interviewed Garland himself. And I’ve reached the conclusion that his devotion to procedure, his belief in the rule of law, and in particular his reverence for the duties, responsibilities, and traditions of the U.S. Department of Justice will cause him to make the most monumental decision an attorney general can make.”

“Let me be absolutely clear: Garland did not tell me he was going to indict Donald Trump. In fact, he did not tip his hand to me in any way—he is far too cautious to signal his intentions to even his closest friends, much less a reporter. Nor did his top aides suggest the announcement of an indictment. When his department says that it doesn’t discuss ongoing cases, it means it—at least in this case.”

Bloomberg: “Everywhere you turn, the biggest players in the $23.7 trillion US Treasuries market are in retreat.”

“From Japanese pensions and life insurers to foreign governments and US commercial banks, where once they were lining up to get their hands on US government debt, most have now stepped away. And then there’s the Federal Reserve, which a few weeks ago upped the pace that it plans to offload Treasuries from its balance sheet to $60 billion a month.”

“If one or two of these usually steadfast sources of demand were bailing, the impact, while noticeable, would likely be little cause for alarm. But for every one of them to pull back is an undeniable source of concern, especially coming on the heels of the unprecedented volatility, deteriorating liquidity and weak auctions of recent months.”

Politico: “The extraordinary show of bipartisan support — Powell’s policies are widely backed by Republicans — is a reflection of both the years he has spent cultivating relationships on Capitol Hill and an acknowledgment that rising prices are also a huge political liability that lawmakers can’t easily address themselves.”

Politico: “By the end of last week, the administration expected between 13 and 15 million people out of 283.4 million Americans aged 12 and up will have opted to get the updated Moderna or Pfizer jab ahead of what officials warn could be another deadly Covid winter.”

“That’s just five percent of the eligible population — a sign of the stark challenge facing a Biden administration that has positioned October as a make-or-break month for the overall success of its booster campaign. Top health officials have downplayed the low takeup, saying the numbers are a good start.”

Related from the Financial Times: “A lack of funding and political will is hampering efforts to develop the next generation of vaccines that could protect millions of people from emerging new pathogens, experts have warned.”

“Secret Service agents asked the agency for a record of all of the communications seized from their personal cellphones as part of investigations into the events of Jan. 6, 2021, but were rebuffed,” NBC News reports.

“The Secret Service’s office that handles such requests, the Freedom of Information Act Program, denied the request, in which agents invoked the Privacy Act to demand more information about what had been shared from their personal devices.”

The president of the Los Angeles City Council apologized after she and two other council members were caught using racist language while discussing a white colleague and his Black son, the Los Angeles Times reports.

Nury Martinez can be heard in leaked audio calling fellow council member Mike Bonin “that little bitch,” adding that he treated his adopted son like “an accessory.”

Later, she refers to the child as “su negrito,” a disparaging term for a Black person, and “ese changuito,” or that little monkey.

Wall Street Journal: “The real challenge to Democrats’ IRS plans goes beyond McCarthy’s first-day agenda. It is embedded in the agency’s continuing need for lawmakers to approve annual spending that rises steadily to cover workers’ cost-of-living pay increases and other expenses. Between now and the end of 2031, when the $80 billion expires, those annual budgets are projected to total $138 billion.”

“If Congress approves all that, the $80 billion pays for a significant expansion of tax enforcement and customer service. If Congress cuts or flatlines the annual budget, the IRS could be forced to deploy some newly approved funds to maintain current operations, limiting the agency’s ability to collect unpaid taxes.”

“County clerks across Colorado say they’re bracing for a surge of highly motivated election deniers working as poll watchers or election judges in the November midterms — part of a nationwide attempt to manufacture evidence of election fraud,” the Denver Post reports.

A new report finds that 120 candidates “advanced from House, Senate and statewide primary elections this cycle with less than 50 percent of the vote. More than half of that group earned less than 40% of the vote in their primaries,” Politico reports.  “The issue at hand, the report suggests, is that it can send unpopular party nominees to general elections.”

Nearly four out of 10 Republicans and one in four Democrats say they’ll blame election fraud if their party doesn’t win control of Congress in November, in the latest wave of the Axios-Ipsos Two Americas Index.