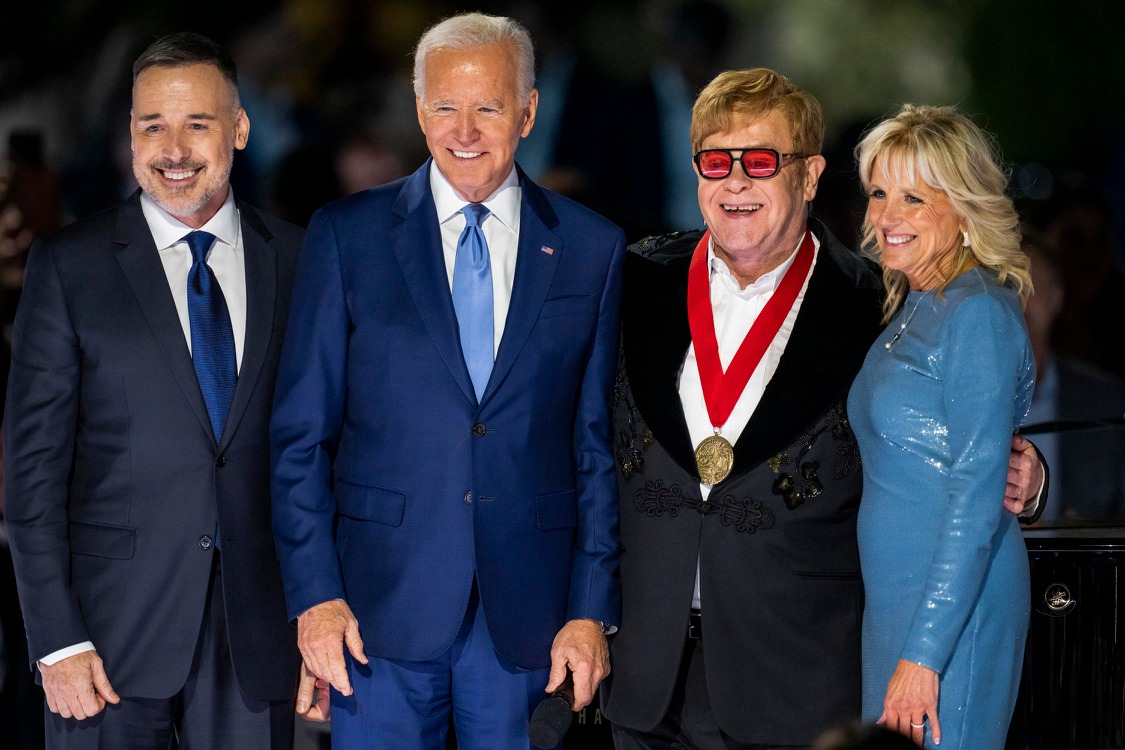 “Russian President Vladimir Putin said the strikes were retaliation for what he called Kyiv’s ‘terrorist’ actions, including an attack last weekend on a key bridge between Russia and the annexed Crimean Peninsula that is prized by the Kremlin.”

“Christina Bobb, the attorney who signed a letter certifying that all sensitive records in former President Donald Trump’s possession had been returned to the government, spoke to federal investigators Friday and named two other Trump attorneys involved with the case,” NBC News reports.

“The certification statement, signed June 3 by Bobb, indicated that Trump was in compliance with a May grand jury subpoena and no longer had possession of a host of documents with classification markings at his Mar-a-Lago club in Florida.”

“After Justice Department officials were given the statement, the FBI subsequently determined the substance of the certification was untrue.”

Related from Aaron Blake: Trump’s nonsensical riff on past presidents and classified documents.

“Some economists fear the Federal Reserve—humbled after waiting too long to withdraw its support of a booming economy last year—is risking another blunder by potentially raising interest rates too much to combat high inflation,” the Wall Street Journal reports. “The Fed has lifted rates by 0.75 percentage point at each of its past three meetings, bringing its benchmark federal-funds rate to a range between 3% and 3.25% last month—the fastest pace of increases since the 1980s. Officials have indicated they could make a fourth increase of 0.75 point at their Nov. 1-2 meeting and raise the rate above 4.5% early next year.”

Bloomberg: “The Federal Reserve is closing ranks around a goal of quickly raising their benchmark interest rate to around 4.5% then holding it there, while being prepared to go higher if elevated inflation fails to show signs of easing.”

“A mood of mounting economic pessimism is taking hold across the world’s major economies, as soaring prices and geopolitical uncertainty damage the prospects of businesses and consumers,” the Financial Times reports.

“U.S.-based economists Ben Bernanke, Douglas Diamond and Philip Dybvig were awarded the Nobel prize in economic sciences for 2022 for their research on banks and financial crises,” CNBC reports.  “Bernanke was chairman of the Federal Reserve from 2006 to 2014.”

“They want reparations because they think the people who do the crime are owed that. Bullshit!”— Sen. Tommy Tuberville (R-AL), quoted by AL.com, speaking at Donald Trump’s rally in Nevada.

“During a private meeting last summer, House Minority Leader Kevin McCarthy told two police officers who defended the US Capitol on January 6, 2021, and the mother of a third who died after the riot, that former President Donald Trump had no idea his supporters were carrying out the attack, according to newly obtained audio of the conversation,” CNN reports.

“Testimony to the House Select Committee on January 6 revealed that Trump watched television for hours as the rioters engaged in a brutal fight with law enforcement.”

“Marjorie Taylor Greene took her seat directly behind Republican House leader Kevin McCarthy, a proximity to power for the firebrand congresswoman that did not go unnoticed, as he unveiled the House GOP’s midterm election agenda in Pennsylvania,” the AP reports.

“Days later, she appeared on stage warming up the crowd for Donald Trump, when the former president rallied voters in Michigan to cast ballots for Republicans, including for control of Congress.”

“Once shunned as a political pariah for her extremist rhetoric, the Georgia congresswoman who spent her first term in the House stripped of institutional power by Democrats is being celebrated by Republicans and welcomed into the GOP fold. If Republicans win the House majority in the November election, Greene is poised to become an influential player shaping the GOP agenda, an agitator with clout.”

Out next week: Weapons of Mass Delusion: When the Republican Party Lost Its Mind by Robert Draper.

Playbook: “Draper also reports on the history of the McCarthy-Trump relationship, including McCarthy’s youthful fascination with Trump — long before he ever knew the future president.”

“Back in 2011, Draper interviewed a friend of McCarthy from his hometown Bakersfield, Calif., who told Draper, ‘One person that he always talked about back then was Donald Trump. He talked about him all the time. I don’t recall if he met him, but he talked about him a lot in our early twenties.’”

Senate Foreign Relations Chair Bob Menendez (D-NJ) is vowing to block all future weapons sales to Saudi Arabia and urging the Biden administration to “immediately freeze all aspects” of U.S. cooperation with the kingdom in response to its decision to cut oil production amid a global energy crisis set off by Russia’s war in Ukraine, Politico reports.

“It will be a birthday like no other in White House history. But those inside 1600 Pennsylvania Ave. are not keen on having a blow-out celebration,” Politico  reports.

“President Joe Biden will turn 80 years old next month, becoming the first commander-in-chief to become an octogenarian while in office. The Nov. 20 birthday will come two weeks after the midterms and will likely intensify scrutiny of Biden’s health and speculation as to whether he will seek another term.”

Ezra Klein: “Biden simply doesn’t take up much room in the political discourse. He is a far less central, compelling, and controversial figure than Trump or Obama or Bush were before him. He’s gotten a surprising amount done in recent months, but then he fades back into the background. Again, that’s a choice: Biden could easily command more attention by simply trying to command more attention. When he picks a fight, as he did in his speech on Trump, the MAGA movement and democracy in Philadelphia last month, the battle joins. He just doesn’t do it very often.”

“Which isn’t to say Biden doesn’t do anything. He governs.”

“North Korea’s recent barrage of missile launches were the simulated use of its tactical battlefield nuclear weapons to ‘hit and wipe out’ potential South Korean and U.S. targets, state media reported Monday, as its leader Kim Jong Un signaled he would conduct more provocative tests,” the AP reports.

“The North’s statement, released on the 77th birthday of its ruling Workers’ Party, is seen as an attempt to burnish Kim’s image as a strong leader at home amid pandemic-related hardships as he’s defiantly pushing to enlarge his weapons arsenal to wrest greater concessions from its rivals in future negotiations.”

“North Korea fired two short-range ballistic missiles toward its eastern waters on Sunday, the latest of a recent barrage of weapons tests, a day after it warned the redeployment of a U.S. aircraft carrier near the Korean Peninsula was inflaming regional tensions,” the AP reports.

Bloomberg: South Korea will strengthen cooperation with US and Japan.

“The Supreme Court decision overturning the constitutional right to abortion is revealing the growing influence of Catholic health systems and their restrictions on reproductive services including birth control and abortion — even in the diminishing number of states where the procedure remains legal,” the Washington Post reports.

“Catholic systems now control about 1 in 7 U.S. hospital beds, requiring religious doctrine to guide treatment, often to the surprise of patients. Their ascendancy has broad implications for the evolving national battle over reproductive rights beyond abortion, as bans against it take hold in more than a dozen Republican-led states.”

The latest YouGov/Times poll in the United Kingdom finds Labour maintaining the enormous lead they opened up over the Conservatives last week, 52% to 22%.

“Requests for Barack Obama are pouring in from Democrats around the country – candidates are desperate for his help in what they feel is an existential midterms battle, one in which each race could help determine control of Congress and governments in the states,” CNN reports.

“To these candidates, American democracy itself is on the line. And while Obama agrees with them on the stakes, many of those invitations are about to get turned down.”

“More than a dozen advisers and others who have spoken with Obama say the former president’s approach in the fall campaign will remain limited and careful. That cautious approach comes as Obama tells people his presence fires up GOP opposition just as much as it lights up supporters, that he has more of an impact if he does less and that he can’t cloud out the up-and-coming generation of Democrats.”

“In the request for bids to round up migrants to transport across the country, the administration of Florida Gov. Ron DeSantis (R) was unequivocal: The winning contractor needed to fly out unauthorized new arrivals found in the state,” the Washington Post reports.

“The parameters, laid out by the Florida Department of Transportation and disclosed in public records released by the state late Friday, are raising new questions about whether the program violated state protocols when DeSantis officials chartered two planes to fly 48 migrants from San Antonio — far from Florida’s shores — to Massachusetts last month.”

“The widely criticized political maneuver appeared to operate outside the boundaries of the $12 million program Florida lawmakers authorized in their budget in June to ‘facilitate the transport of unauthorized aliens from this state.’”

“John Durham, the Trump-era special counsel, set off political reverberations last year when he unveiled a lengthy indictment of an analyst he accused of lying to the FBI about sources for the so-called Steele dossier,” the New York Times reports.

“But the trial of the analyst, Igor Danchenko, which opens on Tuesday with jury selection in federal court in Alexandria, Va., now appears likely to be shorter and less politically salient than the sprawling narrative in Mr. Durham’s indictment had suggested the proceeding would be.”

“Three weeks after antigovernment protests erupted across Iran—sparked by the death of a woman detained for allegedly violating the country’s strict Islamic dress code—the movement has proved more durable than previous challenges to Tehran’s leaders and could pose a continuing threat,” the Wall Street Journal reports.

“Students across the country rallied outside universities on Sunday, chanting slogans including ‘death to the dictator,’ and schoolgirls marched in the streets of Tehran waving their veils in the air, a gesture that has become a central expression of dissent. The governor of Kurdistan province on Sunday ordered universities closed, likely to avoid more protests. Stores across the country stayed closed as part of a widening strike of shopkeepers.”

“The demonstrations are unlikely to topple the government, at least in the short term, activists and political analysts said. But the deep disaffection they represent and the fact that they target a key pillar of the Islamic Republic and its foundational ideology make them a significant test.”