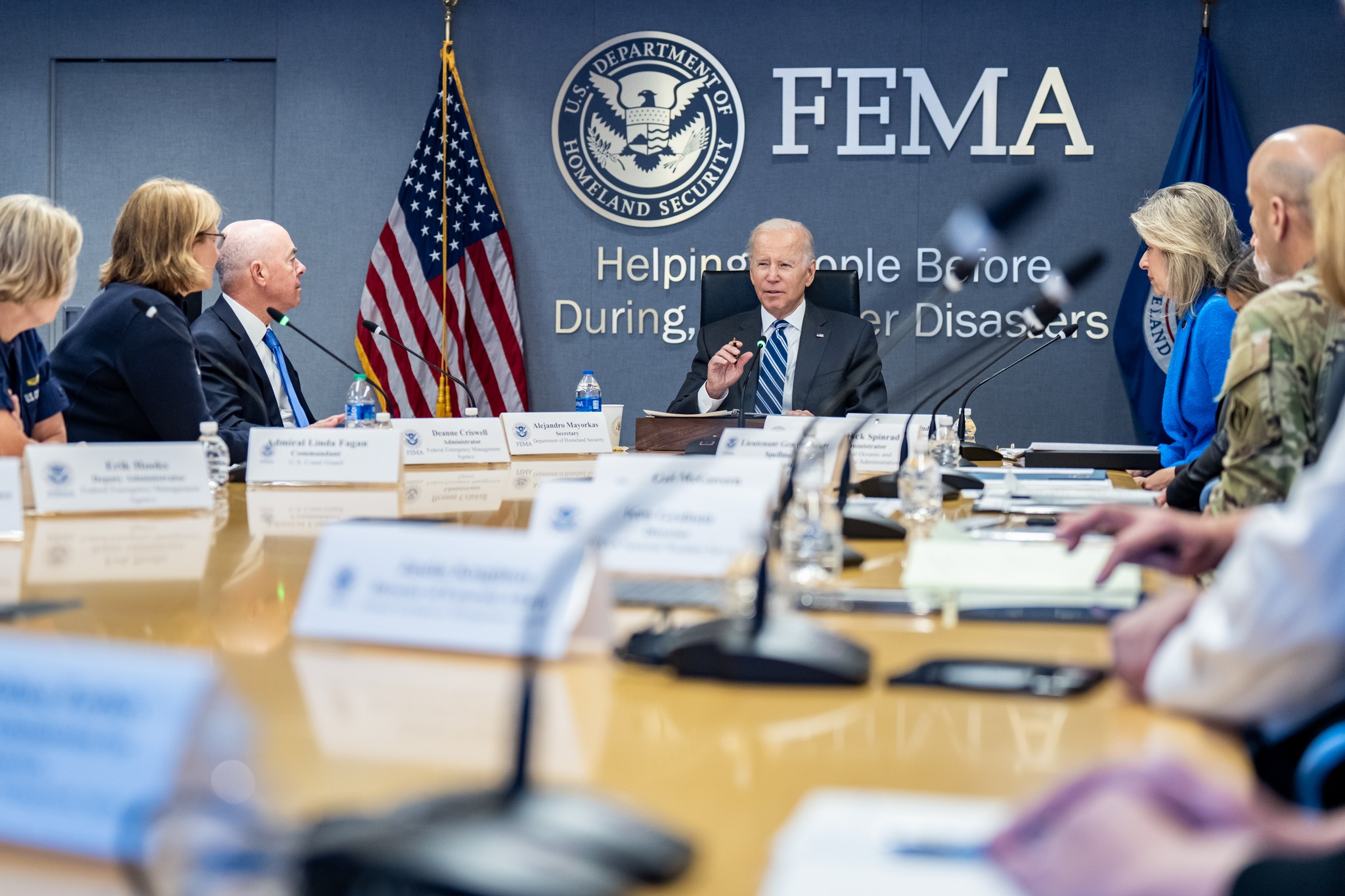 “In a major blow for Russian President Vladimir Putin, a huge explosion has severely damaged the only bridge connecting the annexed Crimean peninsula with the Russian mainland, paralyzing a key supply route for Moscow’s faltering war in Ukraine,” CNN reports.

“The blast early Saturday caused parts of the Kerch Strait road and rail bridge – opened by Putin himself in 2018 – to collapse, images and video from the scene showed.”

“A global revolution in warfare is dramatically tipping the scales of the conflict between Ukraine and Russia, putting in the hands of front-line troops the kind of lethality that until recently required aircraft, ships or lumbering tracked vehicles,” the Wall Street Journal reports.

“It also has the capacity to change battlefields far from Eastern Europe.”

“The centerpiece of the new battle order is the M142 High Mobility Artillery Rocket System, or Himars. Provided by the U.S. and operated by Ukrainian soldiers since June, they are augmenting lightweight and precise weaponry that includes drones, Javelin antitank rockets and Stinger antiaircraft missiles, enabled by GPS guidance and advanced microelectronics.”

“The US government has purchased a significant supply of radiation-injury drugs as the Russian president threatened the use of nuclear weapons,” The Telegraph reports.

“President Biden’s warning that the world is at risk of a nuclear ‘Armageddon’ was designed to send an unvarnished message that no one should underestimate the extraordinary danger if Russia deploys tactical nuclear weapons in its war against Ukraine,“ the AP reports.

Washington Post: “U.S. officials stressed on Friday that they had seen no evidence that Russia had taken the measures necessary to use its nuclear arsenal and that the United States has no reason to change its nuclear posture. But several officials said they are taking Putin’s threats seriously and have said the United States is engaged in direct back-channel conversations with the Russians about the repercussions of taking steps such as the use of nuclear, chemical or biological weapons.

Wall Street Journal editorial: “If he really does fear a nuclear escalation, he owes more of an explanation to the American people than cocktail-party doomsday chatter. He needs to marshal support in Congress and around the world to do everything possible to deter Mr. Putin. A crucial part of deterrence in a democracy is preparing the public for the challenges it might confront. Instead his comments have needlessly frightened Americans and maybe undermined deterrence.”

New York Times: “Mr. Trump, still determined to show he had been wronged by the F.B.I. investigation into his 2016 campaign’s ties to Russia, was angry with the National Archives and Records Administration for its unwillingness to hand over a batch of sensitive documents that he thought proved his claims.”

“In exchange for those documents, Mr. Trump told advisers, he would return to the National Archives the boxes of material he had taken to Mar-a-Lago, in Palm Beach, Fla.”

“Mr. Trump’s aides never pursued the idea. But the episode is one in a series that demonstrates how Mr. Trump spent a year and a half deflecting, delaying and sometimes leading aides to dissemble when it came to demands from the National Archives and ultimately the Justice Department to return the material he had taken.”

“The future of abortion access in a handful of battleground states may rest with who wins the governor’s mansion in November,” the Washington Post reports.

“Democrats are leaning into that message on the campaign trail, seeking to make the November elections a referendum on what they describe as the Republican Party’s extreme position on abortion. This dynamic is playing out in gubernatorial contests in Wisconsin, Michigan, Pennsylvania, Georgia and Arizona — all of which have GOP-controlled state legislatures.”

Politico: “As of Wednesday, abortions are almost entirely unavailable in 14 states — Alabama, Arizona, Arkansas, Idaho, Kentucky, Louisiana, Mississippi, Missouri, Oklahoma, South Dakota, Tennessee, Texas, West Virginia and Wisconsin. And access is significantly limited in a 15th state, Georgia, where the procedure is allowed until the detection of fetal cardiac activity, which usually happens around six weeks of pregnancy.”

A federal judge has ordered Texas Attorney General Ken Paxton (R) to testify in an abortion rights lawsuit after he fled his home to avoid being served, the Texas Tribune reports.

“Barnard, the private women’s college in New York City, will begin offering abortion pills on campus next year,” the New York Times reports.  “The decision, to take effect in September, signals how the nation’s colleges and universities are becoming another front in the nation’s pitched battle over abortion after the Supreme Court decision to overturn Roe v. Wade.”

The Arizona Court of Appeals halted enforcement of an 1864 law that bans almost all abortions, though a 15-week ban remains in place, the Arizona Republic reports.

“It belongs to the state. It belongs to these gentlemen right here, who are state legislators representing you.” — New Hampshire GOP Senate nominee Don Bolduc (R), on who should decide abortion rights.

“The FBI seized Rep. Matt Gaetz’s cellphone in December 2020, marking the beginning of an investigation into whether the Florida Republican allegedly sex-trafficked a 17-year-old girl. In the time since, his former friend Joel Greenberg pleaded guilty to trafficking the same teen in exchange for helping the Justice Department’s investigation. Gaetz’s ex-girlfriend also struck a deal, obtaining immunity from federal prosecution in return for her testimony,” NBC News reports.

“But the sex-trafficking investigation into Gaetz now appears stalled, according to seven attorneys who represent witnesses, people who have been subpoenaed or have spoken to investigators.”

A Michigan man involved in a plot to kidnap Gov. Gretchen Whitmer (D) in 2020 was sentenced to four years in prison on Thursday, Axios reports.

“A former Justice Department lawyer who became a close ally in Donald Trump’s effort to subvert the 2020 election is fighting to save his law license and stave off other professional discipline from the Washington, D.C. bar,” Politico reports.

“Jeffrey Clark appeared for a lengthy proceeding Thursday that is a prelude to a disciplinary hearing on claims he violated legal ethics in his persistent efforts to undercut the legitimacy of the 2020 election. The heart of the issue: Did Clark merely offer up unwise suggestions to his superiors — hardly the basis for disciplinary action — or did his persistence in the face of a lack of evidence of fraud render his conduct so inappropriate that he should be punished?”

“A federal judge halted key provisions Thursday of New York’s latest attempt to restrict who can carry a handgun in public and where firearms can be brought, saying multiple parts of a law the state passed this year are unconstitutional,” the AP reports.

“The rules were part of a sweeping gun law that went into effect Sept. 1 designed to protect public safety while adhering to a U.S. Supreme Court ruling that invalidated New York’s old system for granting permits to carry handguns outside the home.”

Dana Milbank looks at the possible House GOP class of 2022, which he says pushes the bounds on crazy.

A sampling: “the Texas woman accused by her estranged husband of cruelty toward his teenage daughter; the Colorado woman who backed an effort to secede from her state; the Virginia woman who speculated that rape victims wouldn’t get pregnant; and the Wisconsin man who used campaign funds from his failed 2020 race to come to Washington on Jan. 6, 2021, where he apparently breached Capitol barricades.”

“What they all have in common is that they’re in competitive races, which means they could well be part of a Republican House majority in January. And that’s on top of a larger group of GOP nominees in deep-red congressional districts who are a motley assortment of election deniers, climate-change deniers, QAnon enthusiasts and Jan. 6 participants who propose to abolish the FBI and ban abortion with no exceptions, among other things.”

Edward Luce: “A key sign of a fading power is its currency losing value. Britain, like ancient Rome, could tell you a thing or two about that. By this yardstick America is close to an imperial peak. The euro is too fragmented, and China’s yuan too restricted, to threaten King Dollar’s primacy. Bitcoin is a pyramid scheme. Yet political science tells us that America is more divided than at any point since the eve of its civil war in the 1850s. Could it be defying the laws of historical gravity — a failing state that outshines its rivals?”

“The answer is yes, for the time being. A nation can be both rich and ungovernable for long periods. The last country anyone would compare to America is Belgium, which has been dubbed the richest “failed state” in the world. Yet US politics looks more like Belgium’s every day.”

“Republican senators were more deeply involved in orchestrating President Donald Trump’s defense in his first impeachment trial than previously known,” according to excerpts from a forthcoming book, the HuffPost reports.

“Publicly, many GOP senators refrained from commenting on the substance of the proceedings, telling reporters doing so would be inappropriate because of their responsibility to remain neutral as jurors. But privately, the ineptitude of Trump’s legal team forced them to take matters into their own hands.”

“For months, conservative activists who tried to overturn the 2020 election results have urged Republicans to become poll workers so they can be on the front lines of watching for fraud. Yet for the August primary in Arizona’s Maricopa County, the number of Democrats working at the polls was 18 percent higher than the number of Republicans,” the Washington Post reports.

“Such a gap is typical and legal, county leaders say, but Republican National Committee Chairwoman Ronna McDaniel has seized on it in an effort to cast doubt on the way elections are run in the swing state’s most populous county that is home to Phoenix.”

“Publications owned by the hedge fund Alden Global Capital, the second-largest newspaper publisher in the country, will no longer endorse major political candidates in their opinion pages,” the New York Times reports.

“Arizona’s Republican Party raised record sums in 2021 with repeated appeals to supporters for money to help audit the 2020 presidential election… But Kelli Ward, the state party chairwoman, was sending a very different message to top Republicans in Washington at the time,” the Washington Post reports.

Said Ward in a text: “We have not been raising money to pay for the audit.”

“The text message suggests that Arizona GOP leaders had no intention of using donations to help pay for the audit effort, despite what it had been telling its supporters in fundraising pleas.”