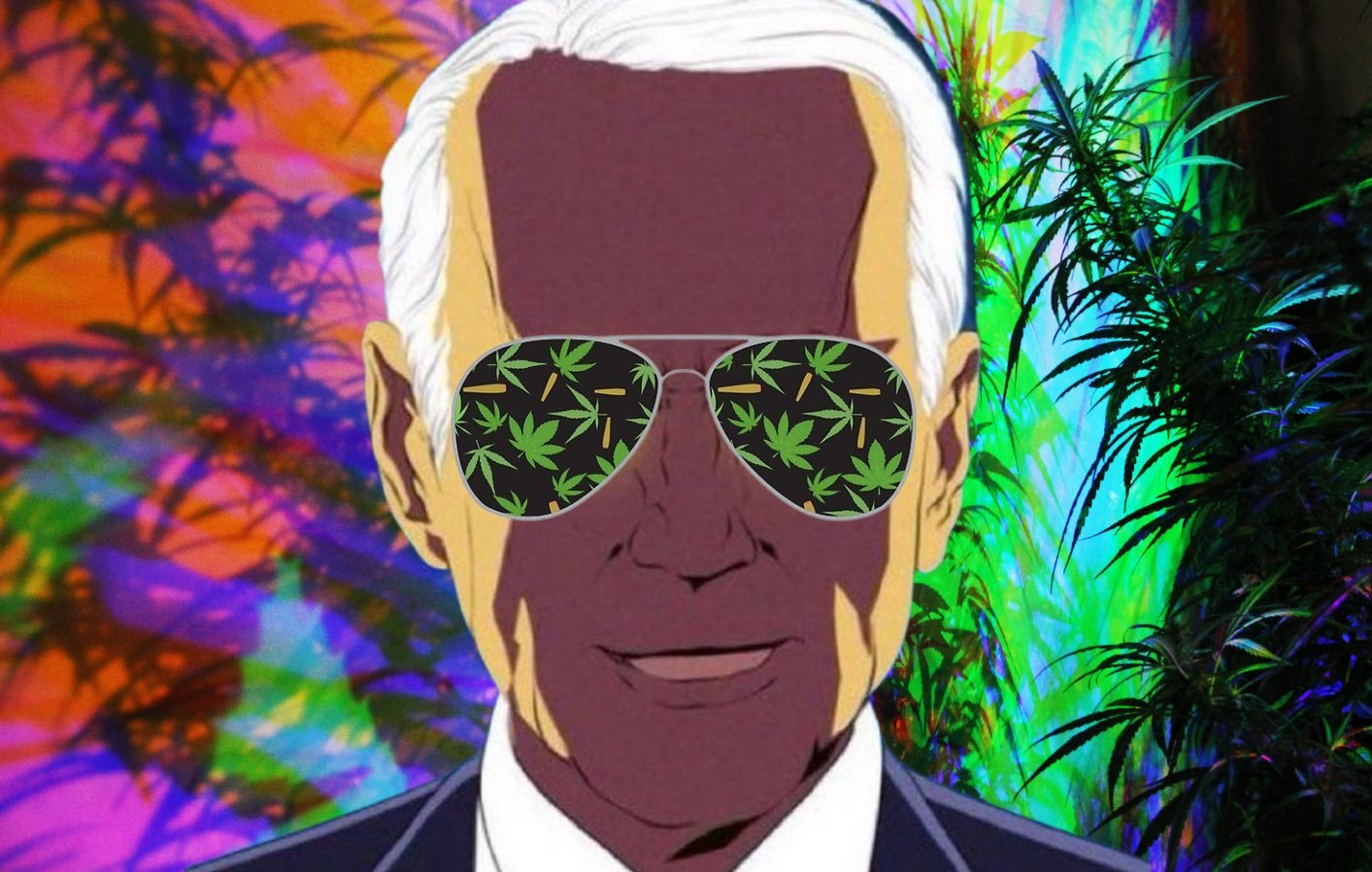 “President Biden on Thursday pardoned all people convicted of marijuana possession under federal law and said his administration would review whether marijuana should still be a Class 1 drug like heroin and LSD,” the New York Times reports.

“The moves are striking shifts for the federal government on an issue that was a campaign promise that Mr. Biden made in 2020.”

“U.S. gasoline prices are ticking up after a roughly 100-day decline, threatening to inflict new pain on consumers who have been grappling with widespread inflation for more than a year,” the Wall Street Journal reports.

The OPEC+ alliance announced on Wednesday that it will cut oil production by two million barrels per day, which could cause gas prices to surge.

The production decrease will be a boon to Russia (which happens to be a member of the alliance), as the Washington Post points out. Higher oil prices mean more money for Russia’s invasion and illegal land-grabbing in Ukraine.

OPEC+ said its decision was prompted by “uncertainty that surrounds the global economic and oil market outlook.”

“The move by OPEC on Wednesday to reduce oil production sharply undercuts President Biden’s effort to avoid an increase in gas prices ahead of the midterm elections, while setting back his push to constrain the oil revenue Russia is using to pay for its war in Ukraine,” the New York Times reports.

“It also exposes the failure of his fist-bump diplomacy over the summer with the crown prince of Saudi Arabia.”

Playbook: “The news was met with outrage in Washington, as a growing chorus of Democratic lawmakers on both sides of the Capitol seethed about what they described as an increasingly one-way U.S. relationship with Saudi Arabia.”

With his war on Ukraine becoming an increasingly embarrassing disaster, Russian leader Vladimir Putin has been hinting recently at escalating the invasion with nuclear weapons. Here’s an overview of what we know about the nuclear weapons he has at his disposal.

David Ignatius: “As Ukrainian troops surged forward on the ground this week, European leaders who gathered at a conference here were heady with what many described as an impending Ukrainian triumph over Russian President Vladimir Putin and the lawless, autocratic system he represents.”

“The victory celebration is stirring but wildly premature. Many months of bloody fighting probably lie ahead, with the danger growing that Russia might use tactical nuclear weapons in an effort to stave off defeat. But politicians from across Europe seemed so galvanized by Ukraine’s recent battlefield success that many dismissed the dangers of Russian escalation and what could be a cold winter for an energy-short Europe.”

“A motorcade taking Vice President Harris to work was in a one-car accident on a closed roadway in D.C. Monday morning, an incident that concerned both the Secret Service director and the vice president and revived worries about the agency’s history of concealing its mistakes,” the Washington Post reports.

“The Secret Service agent driving Harris in a sport utility vehicle struck the curb of a downtown tunnel hard enough that the vehicle’s tire needed to be replaced, bringing the motorcade to a standstill near Foggy Bottom at about 10:20 a.m.”

That’s not how the Secret Service initially reported it to the agency’s senior leadership, according to the Washington Post. Instead, agents who were part of Harris’ motorcade reportedly claimed that the vice president had transferred cars due to “a mechanical failure.” The Secret Service director wasn’t told the real reason until later on Monday.

Maggie Haberman talks about her new book on Donald Trump, Confidence Man, in an excellent interview with Olivia Nuzzi:

“In a lot of ways, in addition to contextualizing a lot of his background, I did try showing the outtakes — the moments when he is not on-camera, the moments when he is figuring out what he is going to say once he gets on-camera. That moment in the January 6 committee hearing, where they showed the video of him recording what he was going to say to the public after January 6 and he kept saying, ‘I don’t want to say the election is over.’ I thought that was one of the most revealing things they could have done about him because what he says between the takes is much more authentic to who he is.”

“One of the things I write about is that he sort of created the character of ‘Donald Trump’ with Tony Schwartz in The Art of the Deal, but the book that he published later, Surviving at the Top, that was him, that was his voice. It was grievance and anger and this one was mean to me and he described his life as ‘shit’ and his marriage. It reminded me of his presidency. He came into the Oval Office and people really believed that the office was going to change him, and that was just never going to happen. The real version of him, the one that his staff tried to hide over and over again, kept popping up.”

“The Biden administration is preparing to scale down sanctions on Venezuela’s authoritarian regime to allow Chevron Corp. to resume pumping oil there, paving the way for a potential reopening of U.S. and European markets to oil exports from Venezuela,” the Wall Street Journal reports.

“In exchange for the significant sanctions relief, the government of Venezuelan President Nicolás Maduro would resume long-suspended talks with the country’s opposition to discuss conditions needed to hold free and fair presidential elections in 2024.”

“House GOP Leader Kevin McCarthy will be swiftly confronted in a Republican majority with a politically dicey proposition gaining steam within his conference: Launching impeachment proceedings against President Joe Biden’s top official in charge of the southern border,” CNN reports.

“Senior Republicans and a number of McCarthy allies are signaling little appetite – for now – in immediately impeaching Biden himself, despite the push among a handful of far-right Republicans seeking to remove the sitting President from office if their party takes the House in next month’s midterms.”

Politico: “A takeover of Twitter by Elon Musk could create headaches for Democrats and Republicans alike, with a potential return of Donald Trump and explosion of misinformation.”

Axios reports Musk’s plans for Twitter may go beyond what we think of as a standard social media app.

Donald Trump filed suit against CNN earlier this week, alleging that the cable news network has intentionally sought to “defame” Trump “in the minds of its viewers and readers for the purpose of defeating him politically.” He is seeking $475 million in punitive damages.

But like most of Trump’s other lawsuits, this one lacks substance. CNN itself noted in correspondence with Trump that was excerpted in the legal filing: “While we will address the merits of any lawsuit should one be filed, we note that you have not identified a single false or defamatory statement in your letter.”

And that brings us to the real reason Trump is suing CNN. Less than 24 hours after filing the lawsuit, Bloomberg reports Trump put out an email to supporters to donate to his cause:  “I am SUING the Corrupt News Network (CNN) for DEFAMING and SLANDERING my name. Remember, when they come after ME, they are really coming after YOU.”

Trump’s new push to donors comes as his fundraising has slowed dramatically over the last few months.

“The hedge funds, trading firms and other major backers are questioning whether the financial riches that first attracted them to the transaction are still strong enough to hold their interest in a deal fraught with troubles… Negotiations have been ongoing as some investors seek bigger potential profits in exchange for following through on commitments to put hundreds of millions of dollars into the venture, which planned a public stock exchange listing through a special purpose acquisition company, or SPAC.”

“The protests that have gripped Iran for three weeks started over a headscarf, but are morphing into a broader movement fueled by middle-class anger over the country’s collapsing economy,” the Wall Street Journal reports.

Said Obama: “What I worry about most is, there is a war right now of ideas, more than any hot war, and it is between Putinism — which, by the way, is subscribed to, at some level, by Erdogan or Netanyahu or Duterte and Trump — and a vision of a liberal market-based democracy that has all kinds of flaws and is subject to all kinds of legitimate criticism, but on the other hand is sort of responsible for most of the human progress we’ve seen over the last 50, 75 years.”

A new CNN/Kaiser Family Foundation poll finds that 90% of Americans believe that there’s a mental health crisis in the U.S. today.

“Asked to rate the severity of six specific mental health concerns, Americans put the opioid epidemic near the top, with more than two-thirds of people identifying it as a crisis rather than merely a problem. More than half identified mental health issues among children and teenagers as a crisis, as well as severe mental illness in adults.”

National Journal: “Trump has more than $100 million sitting in his three main political-action committees—Save America PAC, Make America Great Again PAC, and the Save America Joint Fundraising Committee. Using some sleight of hand, the former president could exploit these funds for another presidential campaign. There are open questions, though, about the methods he used to raise the money, and whether all his disbursements are relevant to a campaign.”

“While the Federal Election Commission is known for its relatively toothless enforcement, experts say the Justice Department could potentially charge him with wire fraud, adding another case to his mounting legal problems.”