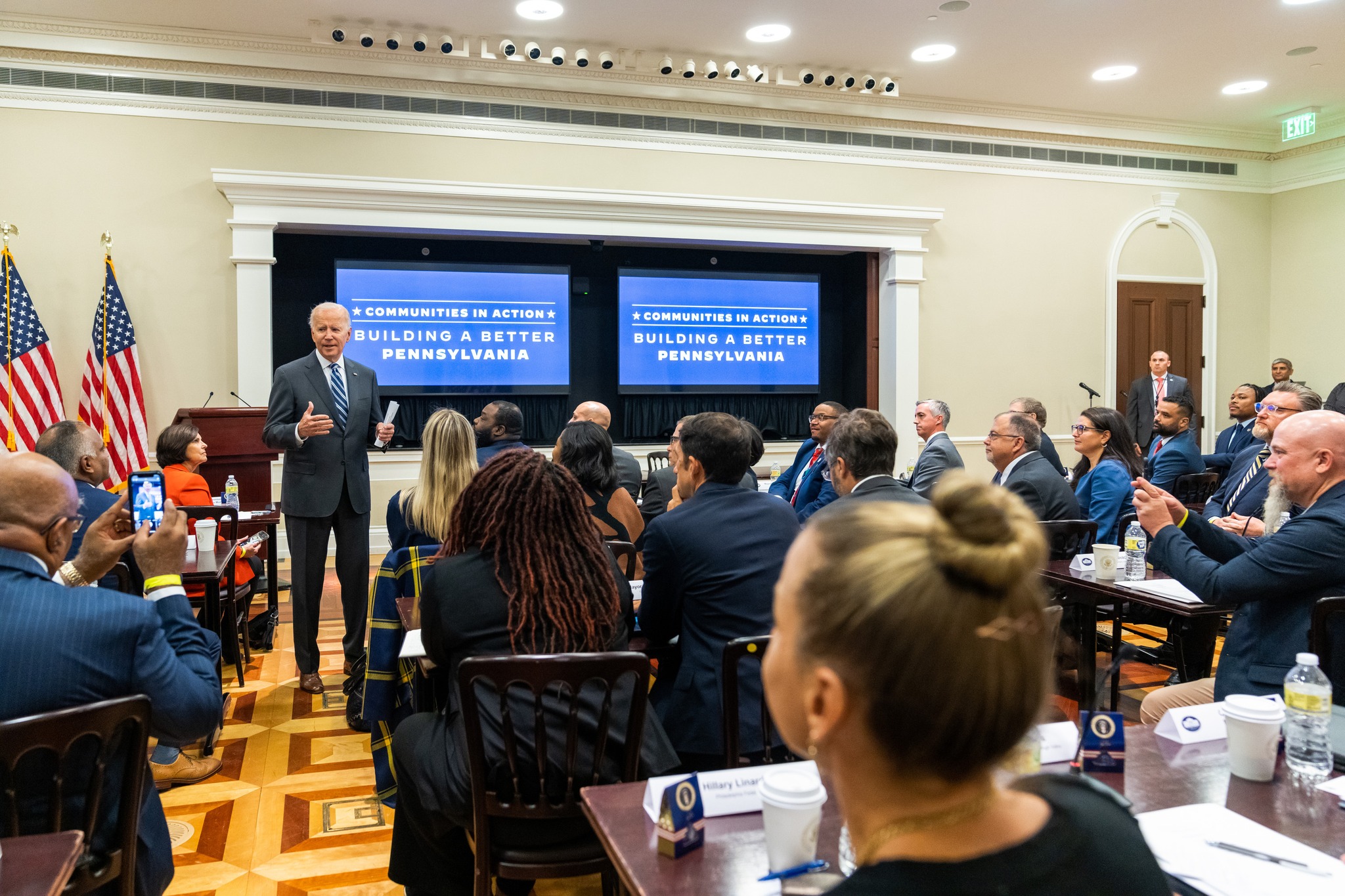 “U.S. stocks have a spotless eight-decade record of rising after midterm elections, but investors and strategists are skeptical over whether November races will spark a rebound in this year’s bruised markets,” the Wall Street Journal reports.

“The S&P 500 has moved higher in the one-year period following every midterm election since 1942, according to Dow Jones Market Data. The benchmark on average has gained nearly 15% in post-midterm years since World War II.”

“This time, tightening monetary policy and worries about an economic slowdown cloud the outlook.”

“OPEC+ is set to consider Wednesday its most drastic reduction of production since the pandemic began in order to help prop up falling oil prices, a move that could put pressure on global economic growth,” the Wall Street Journal reports.

“Two powerful supporters of President Vladimir Putin turned on Russia’s military leadership on Saturday after it ordered a retreat from a key city in eastern Ukraine, a striking sign of dissent within the Russian elite that comes as the Kremlin tries to project an image of strength and unity,” the New York Times reports.

“Residents of the war-wrecked town of Lyman ventured onto the streets Sunday morning, enjoying an unusual quiet after months of fighting, and unsure about who was now in charge,” the Wall Street Journal reports.

“The last Russian forces drove out of the city the previous night, trying to avoid getting encircled by the advancing Ukrainian troops. Not all the Russians made it out. Burning Russian vehicles and sprawled bodies of dead Russian soldiers remain on the roadsides outside the city.”

Sen. Marco Rubio (R-FL) said Sunday that he wants any Hurricane Ian relief bills to be targeted only at disaster funding, adding he would not vote for legislation that goes beyond that, USA Today reports.

Sen. Rick Scott (R-FL), chairman of Senate Republicans’ campaign fundraising arm, said Sunday that he supports “reasonable” abortion restrictions and “there’s arguments to do it at the federal level.”

Said Scott: “I’m pro life as you know, I think we ought to have reasonable restrictions. I think a lot of people are comfortable with 15 weeks and exceptions for rape, incest and life of the mother, but every candidate gets to make their choice.”

“A 14-year-old Tucson girl was denied a refill of a life-saving prescription drug she had been taking for years just two days after Arizona’s new abortion law had taken effect,” KOLD reports.

“14 year old Emma Thompson has debilitating rheumatoid arthritis and osteoporosis which has kept her in and out of the hospital for most of her life. She relies on methotrexate to help tame the effects of the disease.”

“But methotrexate can also be used to end ectopic pregnancies, to induce an abortion and that’s where the problem arises.”

New York Times: “Members of Congress in both parties are experiencing a surge in threats and confrontations as a rise in violent political speech has increasingly crossed over into the realm of in-person intimidation and physical altercation. In the months since the Jan. 6, 2021, attack on the Capitol, which brought lawmakers and the vice president within feet of rioters threatening their lives, Republicans and Democrats have faced stalking, armed visits to their homes, vandalism and assaults.”

“It is part of a chilling trend that many fear is only intensifying as lawmakers scatter to campaign and meet with voters around the country ahead of next month’s midterm congressional elections.”

Said Collins: “I wouldn’t be surprised if a senator or House member were killed.”

Insider: Rep. Alexandria Ocasio Cortez (D-NY) says her office struggles to keep up with the “astronomical” level of daily threats.

Politico: “The Omicron variant emerged in December, causing cases to increase ten-fold in one month and forcing the department of health to put its post-Covid strategy plans on hold. In May, monkeypox began to spread, spurring officials to scramble to find and distribute vaccines. And in July, a patient in New York tested positive for polio, triggering frantic attempts to pinpoint how a once-nearly-eradicated virus was spreading.”

“For the past decade, Brazil has lurched from one crisis to the next: environmental destruction, an economic recession, one president impeached, two presidents imprisoned and a pandemic that killed more people than anywhere else outside the United States,” the New York Times reports.

“On Sunday, Brazilians will cast their ballots for their next president, hoping to push Latin America’s largest country toward a more stable and brighter future — by deciding between two men who are deeply tied to its tumultuous past.”

Said Greene: “I am not going to mince words with you all. Democrats want Republicans dead, and they have already started the killings.”

Karen Tumulty: “When you are dealing with someone for whom there is no bottom, it’s not exactly surprising to see him hit a new low. Nonetheless, Donald Trump’s latest social media broadside against Senate Minority Leader Mitch McConnell (R-Ky.) stands out for its odious recklessness…”

“Outrageousness, of course, is Trump’s political brand, and ignoring his rants is usually the best thing to do. His spokesman insisted that his reference to a death wish referred to a political one, rather than literal one.”

“But to dismiss all of this as just Trump being Trump is to ignore what is really going on here.”

“Donald Trump, visiting Michigan for the second time in six months to rouse his base ahead of the midterm elections, delivered a grim speech Saturday mired in grievances against Democrats, characterizing himself as persecuted by enemies and the nation as threatened by rising prices, crime and the possibility of a Third World War,” the Detroit Free Press reports.

“Describing Democrats as ‘cruel and vindictive left-wing tyrants’ and calling them ‘sinister’ and ‘venomous,’ the former president called on his followers to elect a slate of Republicans he has endorsed to office on Nov. 8, warning that a failure to do so could have dire results.”

Said Trump: “These are dangerous people who are willing to burn every American institution to the ground.”

“It is a political epic, tracing Donald Trump’s journey from the streets of Queens to Manhattan’s Upper East Side, from the White House to Mar-a-Lago, his Elba. There, the 45th president holds court – and broods and plots his return.”

“Haberman gives Trump and those close to him plenty of voice – and rope. The result is a cacophonous symphony. Confidence Man informs and entertains but is simultaneously absolutely not funny. Trumpworld presents a reptilian tableau — reality TV does Lord of the Flies.”

“Republicans are abandoning their long crusade to repeal the Affordable Care Act, making the 2022 election the first in more than a decade that won’t be fought over whether to protect or undo President Barack Obama’s signature achievement,” NBC News reports.

“The diminished appetite for repeal means the law — which has extended health care coverage to millions of people and survived numerous near-death experiences in Congress and the courts — now appears safer than ever.”

“With slightly more than a month before the next election, Republicans in Congress and on the campaign trail aren’t making an issue of Obamacare. None of the Republican Senate nominees running in eight key battleground states have called for unwinding the ACA on their campaign websites.”

“Sen. Bob Menendez (D-NJ) during a trip to Israel last month warned Israeli opposition leader Benjamin Netanyahu that if he forms a government after the Nov. 1 elections that includes right-wing extremists, it could harm U.S.-Israel bilateral relations,” Axios reports.

“Two of Donald Trump’s most prominent allies in his fight to overturn the 2020 election are leading a coordinated, multi-state effort to probe local election officials in battlegrounds such as Michigan, Arizona, and Texas ahead of the November election,” Votebeat reports.

“The America Project, an organization founded by Michael Flynn, a retired three-star general and former national security adviser, and former Overstock CEO Patrick Byrne, has so far interviewed or attempted to interview officials in nearly 200 counties across eight swing states.”

Associated Press: “Poll watchers have traditionally been an essential element of electoral transparency, the eyes and ears for the two major political parties who help ensure that the actual mechanics of voting are administered fairly and accurately.”

“But election officials fear that a surge of conspiracy believers are signing up for those positions this year and are being trained by others who have propagated the lie spread by former President Donald Trump and his allies that the 2020 presidential election was riddled with fraud.”

“Democrats are struggling with how to patch together a diverse coalition of voters across a broad range of states that can win future presidential elections,” USA Today reports.

“South Carolina and Nevada are attractive for their diverse voting bases. Michigan and Nevada offer labor-friendly constituencies. Tradition bolsters the case for New Hampshire and Iowa. Minnesota and Georgia, two emerging battleground states, also are in the mix.”