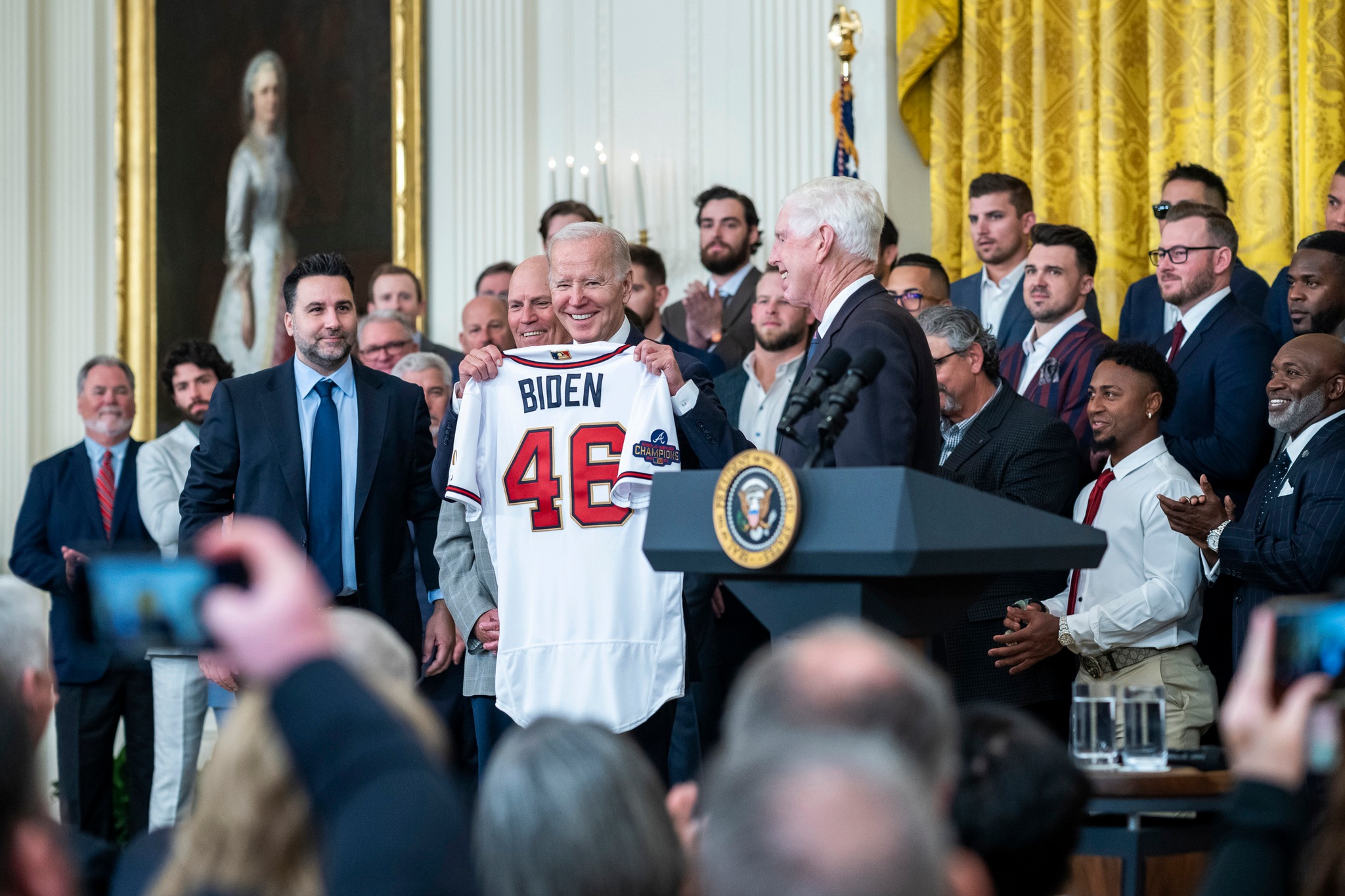 “We are moving the contests in Michigan and Pennsylvania from Leans Democratic to Likely Democratic — both races feature proven Democratic candidates running against controversial and underfunded Republicans.”

A new Grinnell College/Selzer & Co. national poll finds 42% of Republicans in the U.S. identify as “MAGA” Republicans, while 58% disavow the term.

“Voter participation rose in 2016, 2018 and really surged in 2020. The central figure in all of those elections was Donald Trump.”— GOP pollster Tony Fabrizio, quoted by the Los Angeles Times.

PENNSYLVANIA GOVERNOR. Today is the start of GOP Pennsylvania gubernatorial nominee Doug Mastriano’s “40 days of fasting and prayer” campaign that’s set to end on Election Day.  But you can’t really blame Mastriano for turning to divine intervention at this point: His (non-fasting) campaign isn’t doing so hot polling-wise and money-wise to the point where, according to the Philadelphia Inquirer, he’s going on podcasts and asking Americans living abroad to send him cash.

“While it is unclear who Mastriano expects to start fasting on Thursday, the recent entreaties seem to indicate that his campaign, which epitomizes what scholars call Christian nationalist ideology, has fallen on hard times.”

“The messaging has grown increasingly erratic, sometimes arguably bordering on nonsensical. One of Mastriano’s main attack strategies these days is emphasizing that he is taller than Shapiro.”

Every day seems to bring a new story about how Republicans are astounded by how terrible their nominee is, but the most serious vote of no confidence in Doug Mastriano might come from Commonwealth Partners head Matt Brouillette, whose super PAC is responsible for the only non-Democratic TV ads of the entire campaign. “I can’t even assess things because I don’t see a campaign,” Brouillette told the New York Times, adding, “I’ve not seen anything that is even a semblance of a campaign.”

Brouillette also mused to the Philadelphia Inquirer, “In this environment, in this election year, it is likely the only time a candidate like Doug Mastriano could possibly win … But I don’t see a path without the resources to connect with those key swing voters.”

Jonathan Bernstein: “Very few people will confess to being such loyal followers of their political party that they automatically adopt whatever positions it takes. Most voters like to think of themselves as independent: They have their own opinions on the issues, and they support candidates, not parties.”

“People are not necessarily wrong to think like this — as the political scientists Chris Achen and Larry Bartels have written, voting decisions can genuinely feel this way. But this is not how most voting decisions are made. Political parties shape public opinion far more than most people realize, as this year’s congressional campaigns illustrate.”

“Consider the issue of abortion. It is conventional wisdom that the Supreme Court’s decision to overturn Roe v. Wade will benefit Democrats in November, because people who care deeply about abortion rights are now more likely to vote. But there is a sizable group of voters who aren’t particularly focused on abortion — and they are guided not so much by their own views of the Dobbs decision, but by their party’s view of it.”

OHIO 9TH CD. “J.R. Majewski (R) has centered his campaign for a competitive Ohio congressional seat around his biography as an Air Force veteran. But one of the big questions that has surfaced is why Majewski was told he could not reenlist in the Air Force after his initial four years were up,” the AP reports.

“Majewski’s campaign said last week that he was punished and demoted after getting in a ‘brawl’ in an Air Force dormitory in 2001. Military records obtained since then, however, offer a different account of the circumstances, which military legal experts say would have played a significant role in the decision to bar him from reenlisting. They indicate Majewski’s punishment and demotion were the result of him being stopped for driving drunk on a U.S. air base in Japan in September 2001.”

MAINE 2ND CD. The University of New Hampshire finds Democratic incumbent Jared Golden leading Republican Bruce Poliquin 44-33 in their rematch from four years ago, with another 8% going to independent Tiffany Bond, who herself took 6% in the initial round in 2018. This poll, which is the first we’ve seen here in months, did not attempt to simulate the instant-runoff process.

However, neither party is behaving like Golden is far ahead in this 52-45 Trump seat. As the most recent edition of our Independent Expenditure Tracker shows, the conservative Congressional Leadership Fund has dumped $2.5 million here, while its opponents at House Majority PAC have deployed another $1.5 million.

The only House race in the country where the GOP has spent more is Michigan’s 7th, where the CLF and NRCC have expended a combined $4.8 million to unseat Elissa Slotkin. HMP and the DCCC, by contrast, have so far deployed more money in six other contests, with Michigan’s 7th also taking the number one spot.

PENNSYLVANIA 17TH CD. The Congressional Leadership Fund is airing yet another commercial attacking Democrat Chris Deluzio in this 52-46 Biden constituency, but it spends considerably more time going after Summer Lee, who would be the first Black woman to represent Pennsylvania in Congress should she prevail in the neighboring and far bluer 12th.

The narrator argues that Deluzio “bankrolled socialist Summer Lee, who wants to defund the police,” though the only thing the spot cites to link the two are contributions to her 2020 legislative campaign and a tweet that was also sent out before she ran for Congress. The spot makes the most of that, though, by playing a clip of Lee saying, “Policing as we know it is no longer necessary” and calling herself a “prison abolitionist.” Deluzio responded by calling the commercial “a lie” and saying he doesn’t back defunding the police.

LOS ANGELES MAYOR. Billionaire Rick Caruso has fired off a new ad as part of his $20 million buy that attacks Rep. Karen Bass for giving a 2010 speech to the Church of Scientology, a story that surfaced two years ago when she was on Joe Biden’s vice presidential shortlist. The audience sees Bass declare, “This day and this new Church of Scientology is an exciting moment because I know your goal and your commitment is truly to make a difference,” before the ad shows text from a Time article saying, “Ruined lives…Federal crimes. Scientology poses as a religion but really is a ruthless global scam.”

Bass tweeted in 2020 that in the years since she gave that address, “[P]ublished first-hand accounts in books, interviews and documentaries have exposed this group.” She said again this week that she’s “never ever been affiliated with Scientology and absolutely condemn their practices.”

New York Times: “In the final phase of the midterm campaign, Republicans are intensifying their focus on crime and public safety, hoping to shift the debate onto political terrain that many of the party’s strategists and candidates view as favorable. The strategy seeks to capitalize on some voters’ fears about safety — after a pandemic-fueled crime surge that in some cities has yet to fully recede.”

“But it has swiftly drawn criticism as a return to sometimes deceptive or racially divisive messaging.”

Senate Republican leader Mitch McConnell said Wednesday that he believes his party now has a “50-50 shot” of getting the chamber back less than six weeks away from the midterm elections, the AP reports.  Said McConnell: “We are in a bunch of close races. It’s going to be really, really close either way, in my view.”

“The 2022 midterm elections are on track to be the most expensive ever as more than $6.4 billion is poured into TV, radio and digital ads for U.S. House, Senate, gubernatorial and local races,” CNBC reports.

“Virginia Gov. Glenn Youngkin (R), who has been raising his national profile ahead of a possible presidential campaign, has invited top Republican donors from around the country for a two-day event this week,” the Washington Post reports.

A new super PAC launched last week by Donald Trump’s allies — dubbed MAGA, Inc. — was billed as Trump’s primary vehicle for helping Republican candidates in the midterm elections. It comes as many Republicans around the country are being dramatically outspent by Democrats in races that will determine control of Congress.

But like everything else involving Trump, the main beneficiary of the new PAC is most likely Trump himself. That’s because Trump can already spend as much he wants on midterm election candidates from his existing Save America PAC, which he formed after leaving the White House and reportedly has $105 million in the bank. There’s no need to set up a separate super PAC for that purpose. Trump could spend the entire amount to help Republicans win control of the House and Senate if he wanted.

But Save America — which has spent more on Trump’s legal bills than on boosting other Republicans — can’t actually support Trump himself as a presidential candidate in 2024. That’s because a “leadership PAC” can’t legally promote the candidacy of the individual who set it up.

The new MAGA Inc. super PAC will be able to do just that. And if Trump transfers money from his leadership PAC to the new super PAC before he becomes a federal candidate, it’s probably completely legal. To avoid any legal challenges, Trump will probably spend some of the money on candidates in the midterm elections. But don’t be surprised if he leaves the vast majority of the funds for his own 2024 presidential campaign.

“Gov. Gavin Newsom’s public slugfests with the governors of Texas and Florida over immigration and abortion is generating important national attention,” McClatchy reports.

“But perhaps even more importantly — assuming he has further political aspirations — his more aggressive demeanor is endearing him to influential Democratic insiders.”

“The California governor’s moves, which include billboard and television ads blasting Republicans in GOP-dominated states, fuel speculation that all this is a prelude to a future presidential bid.”

“A decade ago, Pennsylvania Democrats outnumbered Republicans by one million registered voters, or about 13 percentage points. This year it’s down to 540,000, about six percentage points,” the Philadelphia Inquirer reports.

“Republicans have added voters across Pennsylvania, in virtually every county that isn’t anchored by or near a large city. Much of the growth is in small or medium-sized counties. Many new Republicans are Democrats and independents who switched parties and have likely already been voting Republican for years. Democrats have far fewer party-switchers coming their way, and are instead pulling in new voters, especially young ones. That long-running trend spiked following the Supreme Court decision over-turning a constitutional right to abortion.”