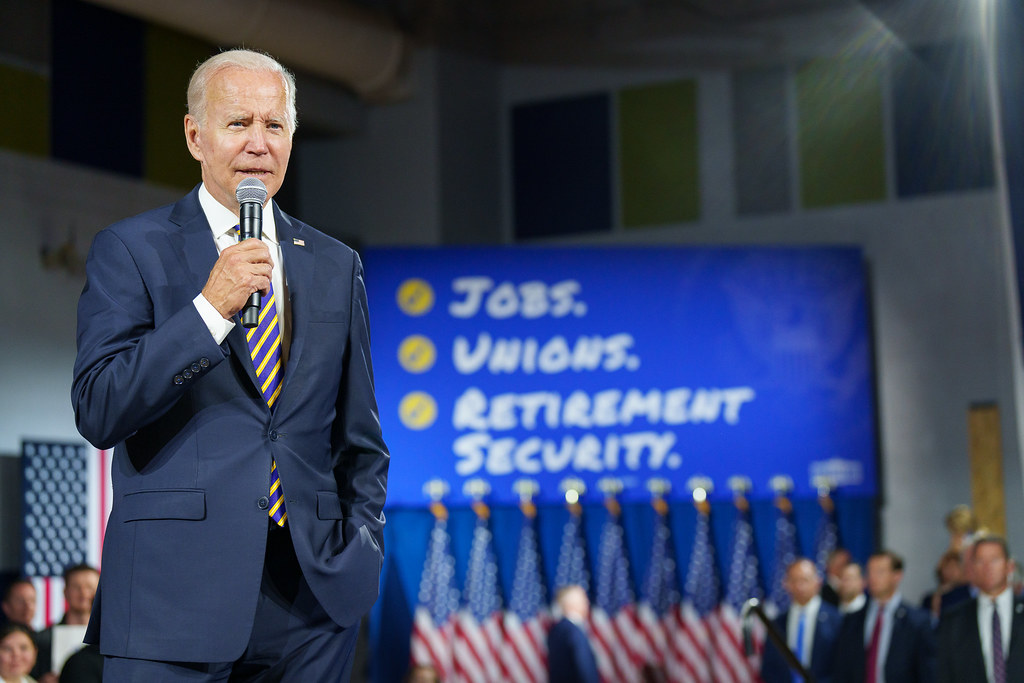 A new CBS News Battleground Poll finds the Republicans still have a lead in the race for control of the House, but “it keeps shrinking.”

“While they’re still in a very good position to capture a House majority, that majority looks narrower today than it ever has, having ticked down for the second straight month to 223 seats in our model estimate. Republicans were at 226 in August and 230 in July.”

“Only a third of Americans — including half of Republicans and one in six Democrats — say it’s OK for state officials to fly or bus migrants to other states, a sign the push by Republican Southern governors to ship foreigners north could backfire with some voters,” according to a Reuters/Ipsos poll.

Philip Bump: The political peril of using immigrants as props.

Those numbers came as quite a surprise, but Amber isn’t the only local firm to show things tight in one of the reddest states in the nation: A few weeks ago, SoonerPoll gave Stitt an even smaller 44-43 edge over Hofmeister, a Republican-turned-Democrat who serves as superintendent of public instruction. The only other survey we’ve seen this month came from the Republican firm Echelon Insights, polling for the big tech trade association NetChoice as part of a 14-state survey, but it showed a different state of affairs. While that assortment of polls overall found very favorable results for Democrats, it still had Stitt up by a wide 55-36.

It remains to be seen if national Democrats will put a serious amount of money into this race four years after Stitt prevailed by double digits despite his party’s struggles nationally and at home. Stitt back then was running to succeed termed-out Gov. Mary Fallin, a fellow Republican who posted toxic approval numbers thanks in large part to the budget cuts that lead to four-day school weeks and a teacher’s strike. Most polls gave Stitt only a small lead over Democrat Drew Edmondson, but the Republican ended up pulling off a 54-42 win.

Hofmeister, who joined the Democratic Party as she was launching her bid against Stitt last year, is hoping that her focus on schools will give her the chance to do what Edmondson couldn’t in 2018. Hofmeister has gone after the governor for supporting private school vouchers after opposing them last time, declaring, “Stitt’s voucher scheme is a rural school killer.” Plenty of Stitt’s fellow Republicans agree, as the GOP-dominated legislature has refused to pass his voucher program.

COLORADO U.S. SENATOR. The Colorado Sun reports that the gun safety group Giffords PAC and a newly established super PAC called 53 Peaks are each spending $2.5 million to attack Republican Joe O’Dea, developments that come as O’Dea’s own super PAC allies are deploying $3 million against Democratic incumbent Michael Bennet. Republicans have touted O’Dea as a strong candidate in a tough state, but no other major outside groups on either side have gotten involved here yet.

The progressive group iVote is taking no chances in the secretary of state race, though, as Politico reports it’s launched a $2 million ad campaign highlighting how Karamo called abortion “satanic” and “child sacrifice.” The narrator continues, “She’s warned of ‘demonic possession’ from sex, spoke at a Qanon conspiracy event. And court documents allege that Karamo tried to intentionally crash a car with her whole family inside.” Politico says iVote will also spend $2 million in Minnesota to help Democratic Secretary of State Steve Simon fend off another election denier, Kim Crockett.

GEORGIA U.S. SENATOR. Georgia U.S. Senate hopeful Herschel Walker’s (R) campaign “recently listed a woman who was arrested in March on charges of participating in the Jan. 6, 2021 attack on the U.S. Capitol as one of his ‘county captains,’” the Atlanta Journal Constitution reports.

NEW HAMPSHIRE U.S. SENATOR. New York Times: “All through his primary, Don Bolduc, a far-right Senate candidate in New Hampshire, said the 2020 election was stolen. A day after his victory was called, he reversed course. But eight days after that?”

“He indicated on a podcast that he had not completely turned his back on the stolen-election movement, conveying that he found it unclear why his election-denial message had not been resonating with voters in the battleground state.”

Said Bolduc: “The narrative that the election was stolen, it does not fly up here in New Hampshire for whatever reason.”

“Then he renewed his false claim there had been fraud in the election.”

Arizona gubernatorial candidate Kari Lake (R) told Fox News that she can relate to incoming Italian prime minister Giorgia Meloni and believes “if you’re not being called a fascist” and a “racist” then “you’re probably not representing the people of your country.”

PENNSYLVANIA GOVERNOR. New York Times: “He is being heavily outspent by his Democratic rival, has had no television ads on the air since May, has chosen not to interact with the state’s news media in ways that would push his agenda, and trails by double digits in reputable public polling and most private surveys.”

“There’s no sign of cavalry coming to his aid, either: The Republican Governors Association, which is helping the party’s nominees in Arizona, Michigan and six other states, has no current plans to assist Mr. Mastriano, according to people with knowledge of its deliberations.”

“Allies of Republican gubernatorial contender Doug Mastriano say they’d gladly welcome U.S. Rep. Liz Cheney to town to campaign against their candidate, insisting that she’s not in touch with the GOP’s base anyway,” the Pittsburgh Post-Gazette reports.  “Indicative of the fervent distrust that Mr. Mastriano’s base has with establishment types, Ms. Cheney’s comments this past weekend — that ‘we have to make sure Mastriano doesn’t win’ the Pennsylvania governor’s race — were quickly dismissed by the state senator’s loyal backers on Monday.”

ARIZONA SECRETARY OF STATE. Arizona Secretary of State candidate Mark Finchem (R) “failed for years to follow state laws requiring elected officials to report their sources of income and business ties,” the Arizona Republic reports. “If elected, Finchem would be in charge of overseeing the financial disclosures and campaign contribution reports required of every elected state official.”

PENNSYLVANIA U.S. SENATOR. Mehmet Oz (R) slammed rival John Fetterman’s choice of clothing — he regularly wears a hoodie on the campaign trail — and said he was “stunned by” the “costume” and believes it contains a “deeper message.”  Said Oz: “When he dresses like that, it’s not an accident. He’s kicking authority in the balls. He’s saying, ‘I’m the man. I’ll show those guys who’s boss.’”  Sometimes it seems like Oz is campaigning for Fetterman.

OHIO U.S. SENATOR. “The debate between Democratic Rep. Tim Ryan and Republican J.D. Vance over whether and when to debate each other may finally be over,” the Cleveland Plain Dealer reports.

“The two U.S. Senate candidates’ respective campaigns both said Monday they had agreed to two debates next month, one on Oct. 10 in Cleveland and another on Oct. 17 in Youngstown.”