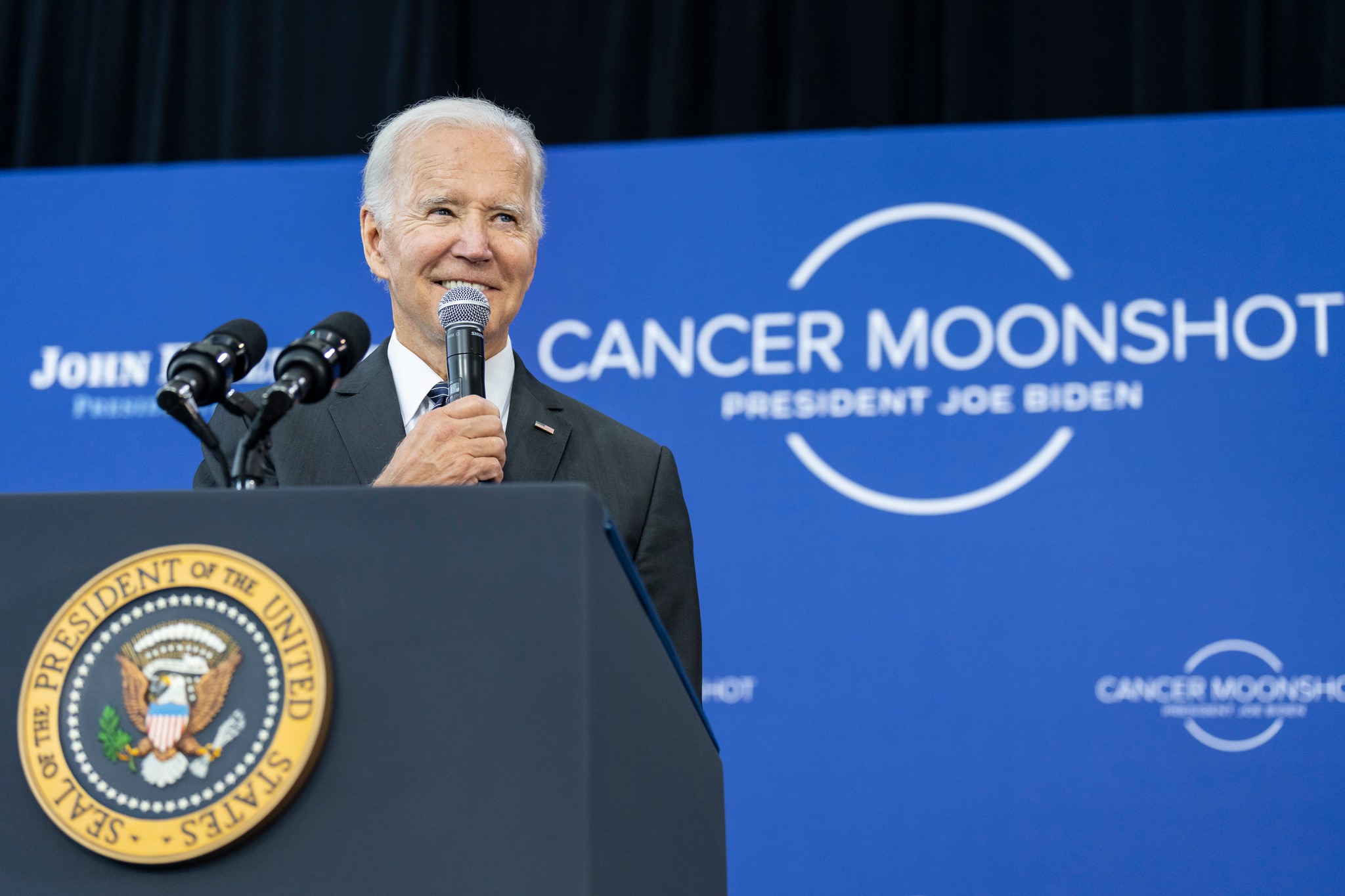 A new Politico/Morning Consult poll finds President Biden’s approval rating has ticked up to 46%, the first time it has reached that level since December 2021.

In the generic congressional ballot, Democrats now lead Republicans 46% to 41%.

“Some have taken the improvement as a sign that ‘fundamentals’ no longer count.”

“A careful sifting of the evidence suggests, on the contrary, that Democrats’ fortunes improved in part because the fundamentals have shifted in our direction. The movement isn’t huge, and we can’t be certain it will continue, but the rules of politics are being reinforced, not rewritten.”

At the other end of the spectrum, 42% say they will definitely not vote for Warnock and 43% say the same for Walker.

ARIZONA U.S. SENATOR. Axios reports that the conservative Senate Leadership Fund has canceled the remainder of its $9.6 million reservation, though the super PAC insisted that other groups were simply taking over its mission to help Republican Blake Masters beat Democratic incumbent Mark Kelly. “We’re glad to see Republican outside forces showing up in a big way in Arizona, with millions in new spending pledged to take down Mark Kelly in the final stretch,” said SLF president Steven Law, who added that the money would be redirected towards attacking Democratic senators in Georgia, New Hampshire, and Nevada.

Law doesn’t appear to have mentioned Masters’ chief benefactor, billionaire venture capitalist Peter Thiel, who has been the subject of much angst in GOP circles. Thiel’s own super PAC, Saving Arizona, spent $15 million to help Masters—an employee and protégé—win the Republican primary in August, but the group remained idle in the weeks afterwards as every poll showed Kelly ahead. The NRSC went on to cancel $3.5 million before SLF axed another $8 million just before Labor Day, but both the Washington Post and CNN went on to detail Senate Minority Leader Mitch McConnell’s unsuccessful persuasion campaign to get Thiel to take over.

Since then, Thiel has sent very mixed messages about his plans. Saving Arizona in early September launched a $1.7 million ad buy—which includes a 30-minute infomercial premiering Oct. 1, but multiple outlets say that all that money came from other donors. Thiel himself is set to host a fundraiser for Masters at the end of this month, but everyone’s waiting to see if this will be accompanied by another huge donation to his super PAC. SLF, though, appears to have decided that either Thiel and other mega donors are coming to their rescue, or that it can force Thiel’s hand by pulling out of the state.

“Peter Thiel is hosting a fundraiser at his Los Angeles home next week for Arizona Senate candidate Blake Masters after GOP officials asked the tech mogul for more money heading into the final stretch of the November midterm elections,” CNBC reports.

Arizona Gov. Doug Ducey (R) offered an implicit rebuke of the direction that former President Donald Trump has taken the GOP during a Tuesday speech at the Reagan Library, warning against leaders in his party who have morphed into “bullies” as well as candidates who are “more defined by their attitudes than the policies they propose,” CNN reports.

GEORGIA GOVERNOR. Atlanta Journal Constitution: “Four years ago, Stacey Abrams and other Democrats caught many Republicans by surprise with an epic ground game focused on mobilizing voters who don’t often cast ballots in midterm elections. In 2020, Republicans poured more resources than ever into closing the gap.”

“Now, Republicans hope they’ve erased the Democratic grassroots advantage ahead of another election that could yet again determine control of the U.S. Senate — and decide every statewide and legislative office.”

Said Georgia Gov. Brian Kemp (R): “We’ve got to outwork them. And I’ll be honest with you: They’ve been outworking us the last four or five cycles.”

Kemp “is aiming for metro Atlanta’s suburbs with the help of another Republican leader who channeled angst over education policies into electoral energy in a politically competitive state: Virginia Gov. Glenn Youngkin,” the Atlanta Journal Constitution reports.

“The two Republicans will stump together on Sept. 27 in Alpharetta, marking one of the Georgia governor’s first campaign forays into the competitive suburban communities ringing Atlanta since he won the May primary.”

GEORGIA ATTORNEY GENERAL and SECRETARY OF STATE. The University of Georgia also takes a look at the state’s downballot statewide races for the Atlanta Journal-Constitution, and it finds both Republican incumbents well ahead. Attorney General Chris Carr turns back Democrat Jen Jordan 45-35, while Secretary of State Brad Raffensperger fends off Democrat Bee Nguyen 50-31. The school’s July poll had Raffensperger up 46-32, while it did not ask about the attorney general race.

“Florida Gov. Ron DeSantis recently sent planes full of migrants to Martha’s Vineyard, but his real target may have been 2024,” USA Today reports.

“The timing of his recent political maneuver comes as Republicans need to motivate their voters to the polls in the midterms, after losing some ground to Democrats over the abortion issue, and also as DeSantis vaults past former President Donald Trump as the top GOP presidential candidate in Florida.”

“If DeSantis and Trump were both on the presidential ballot in Florida, DeSantis would  win among Republican voters in the Sunshine State, according to the latest USA Today/Suffolk University Poll. The poll showed an 8-point swing in the governor’s favor since the previous one in January, though neither have declared their candidacy for a presidential run.”

However, the picture is quite different nationally. A new Politico/Morning Consult poll shows Trump with 52% among all Republican voters and DeSantis getting just 19%.

Nick Catoggio: “At some point an impatient narcissist will no longer be able to ignore his rival’s effrontery, especially if it’s cutting into his camera time. It’s one thing for DeSantis to steal Trump’s hand gestures, it’s another for him to steal the policy issue on which Trump has made his bones as a ‘fighter.’ The day Trump loses his distinction as ‘King of the Jerks‘ to DeSantis is the day we have a bona fide fight on our hands for the 2024 nomination.”

“Which is one reason I think his patience with DeSantis—his willingness to hold his tongue about the younger man—is about to run out.”

Arizona GOP secretary of state nominee Mark Finchem, an election-denying Oath Keeper who was outside the Capitol on Jan. 6, told Time magazine that as secretary of state, he would certify a Biden victory in 2024 “if there’s no fraud” – but “I think you’re proposing something that, quite frankly, is a fantasy.”

Finchem argued that Biden’s 2020 victory in Arizona “strains credibility” because he apparently “can’t find anyone who will admit” they voted for him. Checkmate!

By the way, Finchem had a fundraiser on Sunday that was co-hosted by a Sandy Hook and 9/11 truther (and yep, she’s a QAnoner).

GEORGIA U.S. SENATOR. “The biggest event on the Georgia political calendar before Election Day is the much anticipated debate in Savannah between U.S. Sen. Raphael Warnock and Republican hopeful Herschel Walker on Oct. 14. Could Donald Trump follow up the next day with a campaign visit?,” the Atlanta Journal Constitution reports.

“Several GOP officials say there are ongoing discussions about the former president holding a rally in Georgia on Oct. 15. It would be his first event in the state since a late March rally in Commerce and take place days before the start of early voting.”

Former Wisconsin Supreme Court Justice Michael Gableman “told a group of  Republicans this month that a revolution against government officials over the 2020 election has become necessary but said people have become too comfortable to water the ‘tree of liberty’ with blood,” the Milwaukee Journal Sentinel reports.

Said Gableman: “For the first time in my life I am beginning to wonder if America’s best days are behind us.”

He added: “Our comfort is holding us back from taking the action that is necessary. The greatest challenge of our poor in this country is not lack of food, it’s obesity. It’s a beautiful world. But it’s that very comfort that is keeping us from what our founders knew to be the only way to keep an honest government, which is revolution.”

“Sen. Ted Cruz is embarking on a cross-country midterm campaign swing as he weighs a possible 2024 presidential bid,” Politico reports.

“Cruz will travel to 17 states to campaign for GOP candidates this fall, including three states — Iowa, New Hampshire and Nevada — which are home to early contests on the GOP presidential nominating calendar.”

“Republicans need to win six seats in the November election to take control of the US House of Representatives. In advertising spending, they’re beating Democrats in seven districts that were already leaning their way,” Bloomberg reports.

“In just the two weeks since the Sept. 5 Labor Day holiday, the traditional kickoff for November campaigns, GOP candidates and committees have booked $33 million of ads in those races, compared to $24 million for Democrats.”

Politico: “For most of the two years leading up to the midterm election, Republicans rather than Democrats were making voter registration gains in key states, a Politico analysis of state voter data shows — a signal of GOP momentum heading into a classic backlash election against Democratic control of Washington.”

“This summer, the momentum changed. The decision by the Supreme Court in June that there was no national right to abortion inspired a surge of new voter registrations more likely to be female, young and Democratic. Data from states including Pennsylvania, Ohio and Florida shows evidence of a big leap in enthusiasm and political interest among potential voters supportive of abortion rights.”