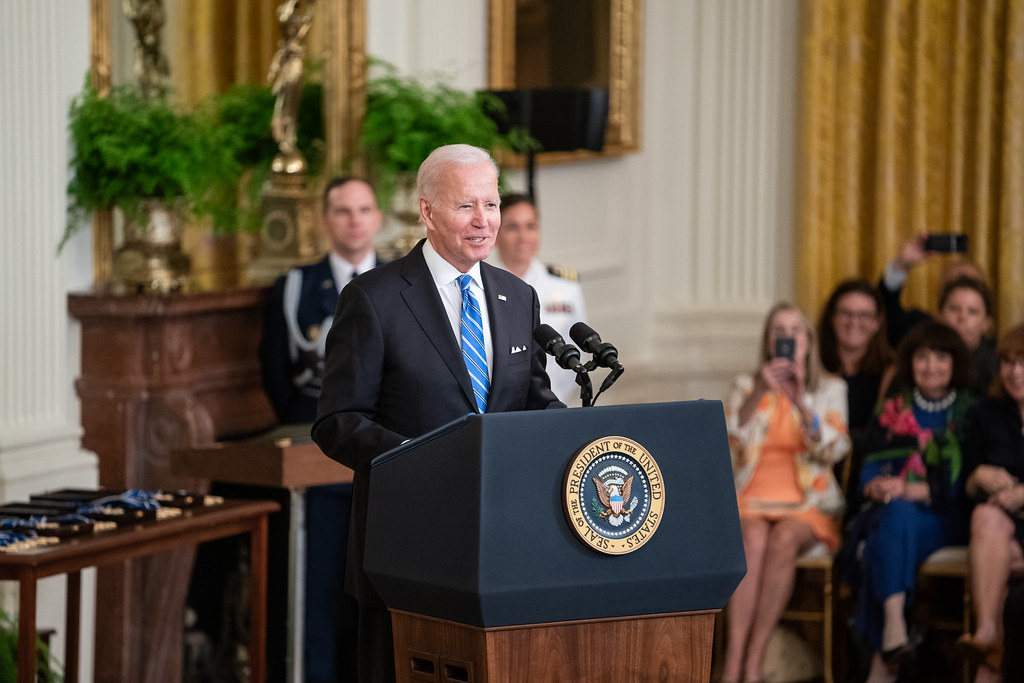 “In a filing with the 11th Circuit Court of Appeals in Atlanta on Friday night, prosecutors said the government is facing irreparable harm as a result of U.S. District Court Judge Aileen Cannon’s ruling putting the potentially highly sensitive records off-limits to the investigative team until an outside expert conducts a review of them and considers Trump’s objections to their seizure.”

New York Times: “Two members of the Trump legal team working on the documents case, Mr. Corcoran and Christina Bobb, have subjected themselves to scrutiny by federal law enforcement officials over assurances they provided to prosecutors and federal agents in June that the former president had returned all sensitive government documents kept in his residence and subpoenaed by a grand jury.”

“That assertion was proved to be untrue after the search of Mar-a-Lago in August turned up more than 100 additional documents with classification markings.”

“Investigators are seeking information from Ms. Bobb about why she signed a statement attesting to full compliance with the subpoena, and they have signaled they have not ruled out pursuing a criminal inquiry into the actions of either Ms. Bobb or Mr. Corcoran.”

Gov. Jim Justice (R) signed into law a ban on almost all abortions at all stages of pregnancy, making West Virginia the second state to enact a law prohibiting the procedure since the U.S. Supreme Court’s June ruling overturning its constitutional protection, CBS News reports.

“Republicans are squabbling over policy and messaging surrounding abortion amid mounting evidence that the Supreme Court’s decision to overturn Roe v. Wade is hurting the GOP ahead of midterms,” The Hill reports.

“Most Republicans supported overturning Roe v. Wade, and the number of pro-abortion rights Republicans in Congress is dwindling. But GOP lawmakers disagree on the next move to make, and many think legislation calling for strict bans on abortion will only compound their problems.”

“Underlining Russia’s widening isolation on the world stage, Prime Minister Narendra Modi of India told President Vladimir Putin on Friday that it is no time for war — even as the Russian president threatened to escalate the brutality of his campaign in Ukraine,” the New York Times reports.

“The televised critique by Mr. Modi at a regional summit in Uzbekistan came just a day after Mr. Putin acknowledged that Xi Jinping, China’s leader, had ‘questions and concerns’ about the war.”

“Taken together, the distancing from Mr. Putin by the heads of the world’s two most populous countries — both of which have been pivotal to sustaining Russia’s economy in the face of Western sanctions — punctured the Kremlin’s message that Russia was far from a global pariah.”

Meanwhile, Bloomberg reports Secretary of State Antony Blinken reiterated the US claim that Russia is committing war crimes in Ukraine.

“Western defense officials and analysts on Saturday said they believed the Russian forces were setting up a new defensive line in Ukraine’s northeast after Kyiv’s troops broke through the previous one and tried to press their advances further into the east,” the AP reports.

Bloomberg reports Vladimir Putin “threatened to step up attacks on Ukraine’s civilian infrastructure, vowing to continue his invasion after his forces suffered some of their worst reverses in the seven-month-old campaign.”

“The Biden administration is revamping its effort to close the Guantanamo Bay prison, for the first time appointing a senior diplomat to oversee detainee transfers and signaling it won’t interfere with plea negotiations that could resolve the long-stalled prosecution of alleged 9/11 mastermind Khalid Sheikh Mohammed and four co-defendants,” the Wall Street Journal reports.

“After taking a low-profile approach to the matter for the first year of his term to avoid political controversy, President Biden is moving closer to fulfilling a campaign promise to shut the facility.”

Tweeted Newsom: “Hey Ron, clearly you’re struggling, distracted, and busy playing politics with people’s lives. Since you have only one overriding need — attention — let’s take this up & debate. I’ll bring my hair gel. You bring your hairspray. Name the time before Election Day.”

“The ads on the billboards direct women to a California state website that tells users how and where to get an abortion in the state.”

NBC News: “While the current obsession with Satan was boosted in part by the QAnon community, partisan media and conservative politicians have been instrumental in spreading newfound fears over the so-called ritualistic abuse of children that the devil supposedly inspires, sometimes weaving the allegations together with other culture war issues such as LGBTQ rights.”

“Those fears are powering fresh accusations of ritual abuse online, which are amplified on social media and by partisan media, and can mobilize mobs to seek vigilante justice.”

“Witch hunts have traditionally been associated with courts — even the kangaroo kind — but today, the accused can be branded satanist pedophiles at the speed of the internet. Online accusers can bypass police, therapists and the traditional media and out their alleged abusers straight to audiences of millions.”

Insider: “Today, about a quarter of Congress is over the age of 70, the highest percentage ever. At the same time, while half the country is aged 38 or younger, just 5 percent of Congress can say the same.”

“The United States has long prided itself on people’s freedom to choose whatever religion they like. The majority has long chosen Christianity,” the Washington Post reports.  “By 2070, that may no longer be the case, according to the Pew Research Center. If current trends continue, Christians could make up less than half of the population — and as little as a third — in 50 years.”

“Meanwhile, the religiously unaffiliated — or ‘nones’ — could make up close to half the population. And the percentage of Americans who identify as Muslims, Jews, Hindus, Buddhists and adherents of other non-Christian faiths could double.”

“The top Republicans on two House committees want details from the White House on whether any administration officials who worked on President Joe Biden’s student loan debt forgiveness plan will personally benefit from it,” Bloomberg reports.

Rep. Elise Stefanik (R-NY), who replaced Rep. Liz Cheney (R-WY) in Republican leadership, “announced Tuesday she plans to seek another term as House GOP Conference chairwoman, and sources say she has three of the top Republicans in the conference backing her bid,” CNN reports.

Rep. Matt Gaetz (R-FL) told a former White House aide that he was seeking a preemptive pardon from President Donald Trump regarding an investigation in which he is a target, the Washington Post reports.

“The testimony is the first indication that Gaetz was specifically seeking a pardon for his own exposure related to the Justice Department inquiry into whether he violated sex trafficking laws. His public posture in the final months of the Trump administration was much less specific, repeatedly calling for broad preemptive pardons to fend off possible Democratic investigations.”

Mississippi Gov. Tate Reeves (R) mocked the capital city of Jackson — which went weeks without clean water.  Said Reeves: “It is a great day to be in Hattiesburg. It’s also, as always, a great day to not be in Jackson.”

“Yeshiva University abruptly announced on Friday that it had placed all undergraduate club activities on hold, the latest maneuver in the legal battle by the Modern Orthodox Jewish institution to keep from recognizing an LGBTQ student group,” the New York Times reports.

“A former high-level FBI agent who was involved in the investigation into the Trump campaign’s contacts with Russia during the 2016 election has himself come under scrutiny by federal prosecutors for his ties with Russia and other foreign governments,” Insider reports.   “Late last year, US attorneys secretly convened a grand jury that examined the conduct of Charles McGonigal, the former head of counterintelligence at the FBI field office in New York City… A witness subpoena seems to indicate that the government, in part, was looking into McGonigal’s business dealings with a top aide to Oleg Deripaska, the billionaire Russian oligarch who was at the center of allegations that Russia colluded with the Trump campaign to interfere in the 2016 election.”

A federal judge ruled the U.S. Senate “does not have to release its full report detailing the Central Intelligence Agency’s interrogation and detention program following the Sept. 11, 2001 attacks,” the Los Angeles Times reports.

“President Joe Biden plans to meet at the White House on Friday with family members of WNBA star Brittney Griner and Michigan corporate security executive Paul Whelan, both of whom remain jailed in Russia,” the AP reports.

“Several of Elon Musk’s friends privately counseled him against acquiring Twitter, once they realized that he wasn’t joking around,” Axios reports.  “Musk didn’t take the advice. He’s now is trying to back out of his $44 billion agreement, with a trial set for next month in Delaware.”

“Jason Schofield, the Republican Rensselaer County Board of Elections commissioner, was arrested outside his residence Tuesday morning by the FBI and charged with fraudulently obtaining and processing absentee ballots last year using personal information of at least eight voters without their permission,” the Albany Times Union reports.

“For a guy who continually complains he’s being secretly surveilled, Alex Jones sure does a lot of spying,” Rolling Stone reports.  “In recent years, the conspiracy theorist has used a network of informers and spies to covertly surveil his ex-wife — and he’s used a similar arrangement to track his current spouse, according to texts on Jones’ phone described to Rolling Stone by multiple sources.”