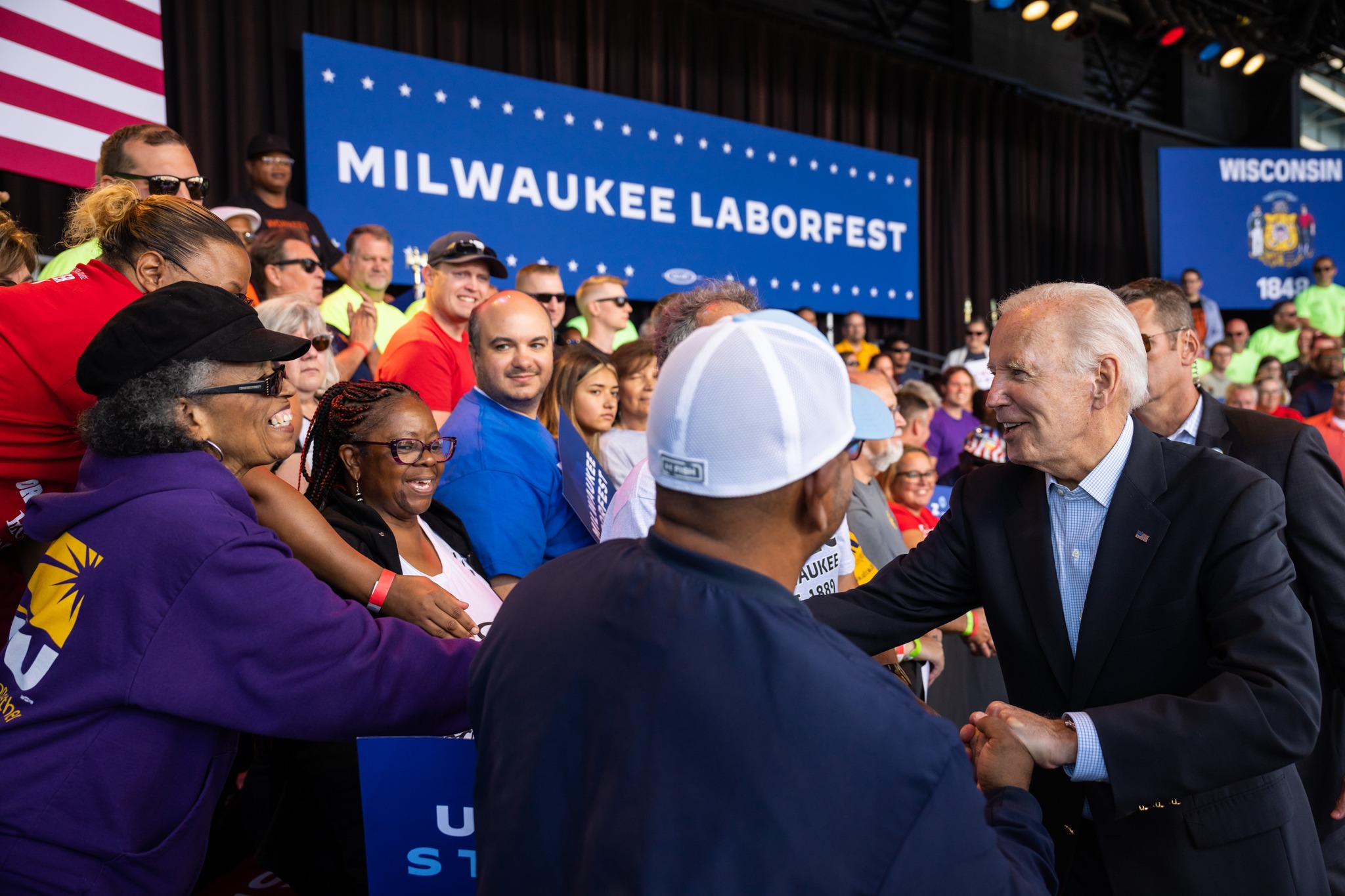 A new Axios/Ipsos poll finds 33% of Americans “prefer strong unelected leaders to weak elected leaders and says presidents should be able to remove judges over their decisions.”

“The findings from this poll shatter the myth that Americans overwhelmingly agree on a common set of democratic values around checks and balances on elected leaders, protection of minority rights and freedom of speech.”

“They’re also a reality check against President Biden’s speech that portrayed threats to democracy as solely driven by Republican supporters of former President Trump who refuse to accept that he lost the 2020 election.”

Related from Vanity Fair: “Yes, Trump’s actual plan was to just… stay in the White House and refuse to come out.”

Nate Cohn: “In the end, history usually prevails. That’s a good thing to keep in mind right now as Democrats show strength that seems entirely at odds with the long history of the struggles of the president’s party in midterm elections.”

“This cycle, the arguments for Democratic strength cut at the heart of the underlying theories for why the party in power struggles in midterms. And that gives me a little more pause about blowing them off.”

“Chuck Schumer is putting his money where his mouth is,” Politico reports.

“The Senate majority leader is pouring in $15 million to Democrats’ defense of their tenuous Senate majority, transferring money from his own campaign coffers Tuesday to Democratic senators and Senate candidates in 11 key battleground races, according to a Democrat familiar with the move. That money will be vital to Schumer’s 50-seat majority, which is bracing for a late-game infusion of GOP spending in key races.”

New York Times: “The infusion of cash comes as Mr. Schumer appears comfortable in his re-election bid in New York. Now he will redeploy his financial resources in the closing weeks of the midterm campaigns to help him hang on to his job as majority leader.”

New York Times: “In an extensive examination of his life and record — across more than 100 interviews with aides, allies, antagonists and peers who detailed several previously unreported episodes spanning his decade in elected office — the most consistent appraisal was that DeSantis, who turns 44 this month, believes his raw instincts are unrivaled and that he may well be correct.”

“He has for years merrily shunned the perspectives of moderating influences and gentle dissenters and found himself validated at every turn, his recent history a whir of nominally risky choices — expert-snubbing Covid policies, an uppercut at one of his state’s largest private employers, a long-shot bid for the office he holds — transmogrified to pure political upside as he seeks to position himself as his party’s rightful heir.”

Rep. Lauren Boebert (R-CO) got into a heated exchange with a local debate moderator at a Saturday evening event, the Daily Beast reports.

Washington Post: “Control of the Senate will affect items critical to Biden’s legacy including the confirmation of more judges; the elevation of a Supreme Court justice, if a vacancy emerges on the high court; the unfolding of high-profile investigations into the president and his son Hunter Biden; the confirmation of top Biden officials; and potential Republican efforts to impeach Biden Cabinet officials and possibly the president himself.”

“What is less clear is whether Biden’s visits actually are boosting the Democratic candidates whose campaigns he hopes to promote. His approval ratings remain relatively low, although they have risen in recent weeks as he has racked up legislative accomplishments.”

Billionaire investor Peter Thiel said he feared Republicans were too focused on bashing liberal states such as California, when they should instead be offering a “positive agenda” for the future of the party, Insider reports.

Thiel said during his remarks that his “intuition” told him that Republicans’ “nihilistic negation” wouldn’t suffice in creating an alternative vision.

NRCC: Politico reports that the House Republican campaign arm has reserved another $28 million for general election TV spots. Most of this money is going to races where the group had already booked ad time, but the reservation includes some new races. We’ve listed these below, with information about which party currently holds the seat and the name of the incumbent if there’s one seeking re-election:

You can also find here our independent expenditure tracker, which is updated early each week to document the money the NRCC and the three other major House outside groups have already spent as opposed to intend to spend.

“Republican leaders are scrambling to shore up their chances to win back both the House and Senate as inflation concerns fade, Democratic enthusiasm for protecting abortion rights surges and new fundraising challenges emerge in the crucial final months of the campaign,” the Washington Post reports.

“GOP officials have been mixing up their advertising spending, with a new focus on issues like crime, plans for a major policy rollout meant to reclaim voter attention and moves to send reinforcements for struggling Senate candidates.”

“Leaders have also been working, with mixed success, to cool down intraparty squabbles over their own strategic missteps and the quality of candidates in pivotal Senate races.”

“Democrats have spent nearly $19 million across eight states in primaries this year amplifying far-right Republican candidates who have questioned or denied the validity of the 2020 election, interfering in GOP contests to elevate rivals they see as easier to defeat in November, even as those candidates have promoted false or baseless claims,” the Washington Post reports.

“The practice by some campaigns and outside groups this year has divided Democrats, with some in the party complaining that such tactics are risky and could ultimately result in the election of candidates who pose serious threats to democracy.”

New York Times: “As they move into the final stretch of the midterm campaigns, Democratic candidates find themselves performing a complicated dance with an unpopular president, whose approval rating is rising but still remains stubbornly underwater. In ways big and small, Democrats have been trying to signal their independence from the White House, without alienating their base or distancing themselves from key parts of Mr. Biden’s agenda.”

“It’s a dynamic that presidents often confront in midterm cycles. What has been especially striking this year is the degree to which Democrats have outperformed the president.”

CNN: Biden ramps up travel schedule as he looks to capitalize on momentum ahead of midterms.

FiveThiryEight finds that more than 60% of Americans will have an election denier on the ballot this fall and that more than half of House Republican members predicted to win seats in November have denied the election.

First Lady Jill Biden says she has not yet discussed with President Biden whether he will run for a second term, CNN reports.  Said Dr. Biden: “Not yet. We’ve been a little bit too busy. So, not yet. But, I’m sure it will be a discussion.”

Rep. Tim Ryan (D-OH), who is running against Vance, tweeted a picture of Ohio State’s schedule opposite an announcement of the rally, adding, “Dude just doesn’t get it.”

This week saw the escalation of what will be an expensive ad war in Massachusetts ahead of this November’s vote over the “millionaires tax” or “Fair Share Amendment.” Should a majority of voters support Question 1, an extra 4% would be added to personal income taxes over $1 million in order to fund education and transportation projects. The local NBC affiliate explains, “For example, if you had personal income of $1.5 million, the first million would be taxed at the current rate of 5.5%, or $55,000. The extra $500,000 would be taxed at 9% or $45,000. You would pay $17,500 more.”

An August MassInc poll found a 57-37 majority in support, but Question 1’s foes are now going up with their first TV spot to try to change public opinion. The Coalition to Stop the Tax Hike Amendment, whose major donors include New England Patriots’ owner Robert Kraft and New Balance chairman Jim Davis, castigated the effort as a tax increase on “tens of thousands of small business owners, family farmers, and homeowners.”

The ad came a month after Fair Share Massachusetts, which is largely funded by unions, launched its own inaugural commercial bemoaning how “[w]orking people pay a higher share of taxes than the wealthiest 1%” and arguing that Question 1 would mean that millionaires would “pay their fair share.” The narrator also declared that “99% of us won’t pay a penny more” if the amendment passed, while $2 billion would be raised for “public schools, colleges, and roads and bridges.”

Both sides have plenty of money to make their case. Commonwealth Magazine writes that Fair Share Massachusetts has raised $11.4 million this year compared to $9.1 million for their opponents.

ProPublica: “For all of the recent uproar over voting rights, little attention has been paid to one of the most sustained and brazen suppression campaigns in America: the effort to block help at the voting booth for people who struggle to read — a group that amounts to about 48 million Americans.

“Time and again, federal courts have struck down such restrictions as illegal and unconstitutional. Inevitably, states just create more.”

Tara Palmeri: “Rick Scott came to Washington with a twinkle in his eye after a very successful run in the private sector and the Tallahassee governor’s mansion. He thought he could apply his maverick ways to running the N.R.S.C., only to learn that there’s only one way to do things in the Senate—and that’s McConnell’s way.”