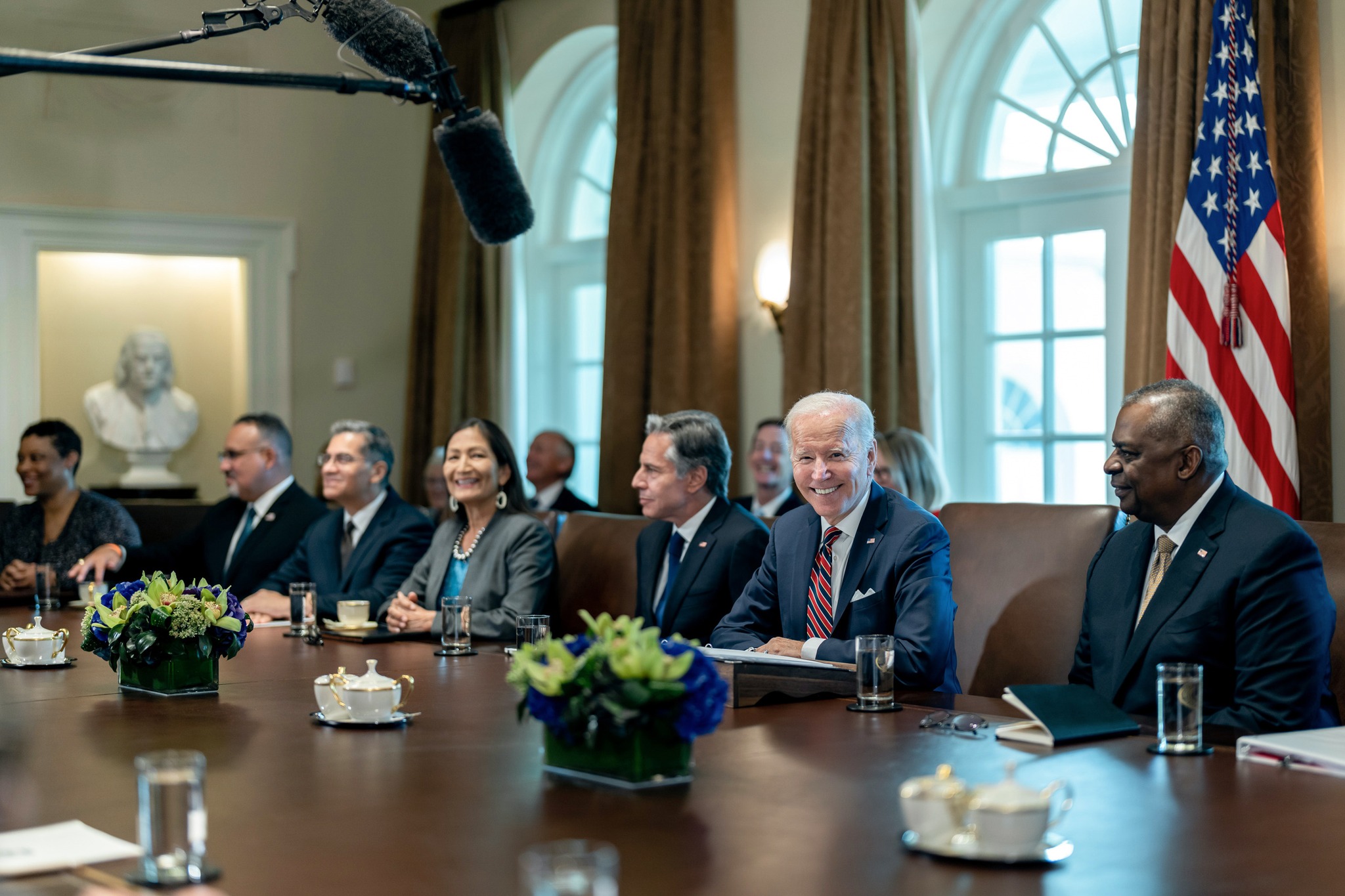 A new PBS Newshour/NPR/Marist poll finds Democrats have a four-point advantage over the Republicans, among registered voters, in this November’s midterm elections despite concerns about the U.S. economy, 48% to 44%.

A new Yahoo News/YouGov poll finds Democrats are heading into the homestretch of the 2022 midterm campaign with a lead over Republicans among registered voters, 45% to 40%, as well as those who say they “definitely will vote” this year, 48% to 45%.

Amy Walter: “A pollster doing work for a non-partisan organization that is not involved in electoral politics shared some of their data with me. That survey also found Democratic candidates were getting a significant share of the vote from those who “somewhat disapprove” of Biden. Among the 11 percent of voters who say they ‘somewhat disapprove’ of Biden, Democrats have 33 point lead on the generic ballot.”

“In other words, maybe the way to look at this gap between Biden’s job approval rating and the generic ballot isn’t to say that Democrats are outperforming Biden, but that Biden is under-performing Democrats.”

“It just seems to me at the moment that turnout is going to be through the roof on both sides. It’s going to be higher than it was in 2018.” — GOP pollster Patrick Ruffini, quoted by Politico, on the midterm elections.

CNN: “Behind the scenes, GOP senators are maneuvering to make up for the committee’s cash shortfall, with discussions underway to take matters into their own hands to circumvent the NRSC entirely and directly help candidates who need critical resources down the homestretch of the high-stakes campaign.”

“A new fear among Republicans: The NRSC won’t be able to bankroll its part to target voters with direct mail and urge them to come to the polls in key battleground states, something that the party committee spent tens of millions of dollars to do during the 2020 cycle.”

Punchbowl News: “So just two months out from Election Day, Senate Republicans fear their campaign committee won’t be able to pour enough cash into their turnout operation to win contested races. And they will have to make up the shortfall.”

First Read: “After a summer of leaders infighting, a key party committee squandering its financial advantage and its nominees struggling on the campaign trail, Senate Republicans are looking for a reset.”

“With 63 days until Election Day — and control of the U.S. Senate completely up for grabs.”

ALASKA AT LARGE CD. Nick Begich (R) refused Sarah Palin’s (R) request to drop out of the race for Alaska’s only congressional seat so that Republican voters could unite behind her candidacy, USA Today reports.

The deadline to drop out of the November election was Monday.

State and national political watchers speculated that Sarah Palin might do her party a favor and drop out of the November election against Democratic Rep.-elect Mary Peltola following her disastrous defeat in last week’s instant-runoff special election, she doesn’t sound remotely interested in going anywhere right now.

Palin instead used her Monday press conference at her Wasilla home, which was the very same place where she announced she was quitting the governorship 13 years ago, to bash fellow Republican Nick Begich. “He keeps calling me a quitter,” Palin said, “And now he wants me, the one who is clearly the only true conservative in this race who can win, he wants me to quit!” She continued, “Now that’s the real joke. Sorry, Nick. I never retreat, I reload.” (Back in 2009, Palin ended her resignation speech, “In the words of General MacArthur said, ‘We are not retreating. We are advancing in another direction.'”)

Begich didn’t find the situation particularly funny, though: Instead, he put out a statement reading, “Ranked choice voting showed that Palin simply doesn’t have enough support from Alaskans to win an election and her performance in the Special was embarrassing as a former Governor and Vice Presidential candidate.” The deadline for candidates to remove their names from the general election ballot passed later that day without any action from Palin, Begich, or Libertarian Chris Bye.

All of this may be giving the GOP an uncomfortable sense of déjà vu ahead of what will be another instant-runoff contest, because Palin and Begich also spent the special election savaging one another while laying off Peltola. Both Republicans instead smiled in selfies with their Democratic opponent, and Palin even went so far as to call her a “sweetheart.” All of this made it easier for Peltola to convince about half of Begich’s voters not to rank Palin as their second choice: Palin only won Begich’s bloc 50-29, while a crucial 21% didn’t express a preference for either finalist.

However, while the two defeated candidates once again seem content to keep attacking each other instead of the soon-to-be-incumbent, national Republican groups are unlikely to let Peltola go through the general election unscathed. Peltola, who will be sworn in on Sept. 13, told Politico, “I do expect attacks [approaching the November election],” though she added, “I do feel a sense of camaraderie and fraternity with the other people who are running.”

Peltola also acknowledged that she has to quickly gear up for her next contest, and she’s already returned to the airwaves with a new spot taking the U.S. Supreme Court to task for revoking “one of Alaska’s most fundamental freedoms: Our right to choose.” Peltola argued, “The federal government has no business taking away our freedoms … we should have the right to make choices that work for ourselves and our families.” That’s not normally a message we’d expect to see in a constituency that Donald Trump carried 53-43, but Civiqs finds that Alaskans agree that abortion should be legal in all or most cases by a similar 54-43 margin.

The latter group may also make history by featuring the first-ever use of the words “ho bags” in a campaign ad. Defending Main Street’s commercial calls Leavitt, who is 25, a “woke Gen-Zer” who “records everything,” a statement that is followed with a SnapChat clip of the candidate laughingly exclaiming, “Listen up, ho bags.” The narrator continues, “She wants to bring her generation’s new vision to Congress. You know, mooching off her parents, [and] running up huge credit card debt.”

Major outside groups have so far ignored a third GOP candidate, former TV reporter Gail Huff Brown, but she’s getting some attention herself with a commercial that promotes abortion rights. She tells the audience that she “chose my unborn child” after her doctor warned that Huff Brown’s own life was at risk, “But in that agonizing moment, I was comforted to know I had a choice.” She continues, “In Congress, I’ll vote to protect the New Hampshire law, and the choice that it guarantees.”

TEXAS 28TH CD. At least $21,000 is going towards a TV ad where Democratic Rep. Henry Cuellar touts his work on public safety and border security, but this commercial is coming from his taxpayer funded D.C. office rather than his campaign. Cuellar can do this because, as Inside Elections’ Jacob Rubashkin explained earlier this summer, House members “are allowed to use official funds for TV ads, as long as they cover official business and steer clear of campaign content.”

The only incumbent we’ve seen run these sorts of spots, though, is Florida Rep. Sheila Cherfilus-McCormick, who won renomination in last month’s Democratic primary. Rubashkin noted that all sorts of “unsolicited mass communications” from the members’ office need to stop 60 days before their next election (a 2020 law slashed this from 90 days), so this Cuellar spot will only be allowed to air through Friday.

“Challengers in Arizona, Georgia, Kansas and Texas are more optimistic about their chances of flipping party control of the powerful post at a time attorneys general will have more sway than ever over who can have an abortion, under what circumstances, and which charges to file in cases when abortion restrictions are violated.”

Politico: “In 2020, there were more than a dozen televised face-offs between Republican and Democratic Senate candidates, and several were already occurring in mid-September. But this year, it’s still a question whether debates will occur at all in many of the Senate’s top battleground states.”

“Across the map and on both sides of the aisle, Senate candidates are in a standoff when it comes to debate negotiations, refusing to agree to show up at the same place and time to air their differences before a moderator.”

Politico: “Online fundraising usually ramps up dramatically and predictably over the course of an election cycle. But campaign finance data show that in the first half of this year, the number of people giving federal contributions to Republican candidates and committees through WinRed — the GOP’s widely used donation processing platform — fell to around 913,000 down from roughly 956,000 contributors during the six months prior.”

“The surprising dip illustrates broader fundraising difficulties that have plagued GOP candidates in key races across the country this summer, even amid hopes that the party could retake control of Congress. It reflects the party’s long-standing challenges in building donor lists to power its campaigns.”

“It is in many ways an ideal job for a public servant with a passion for democracy — the chance to facilitate voting in Georgia’s most populous county, the electoral center of one of the most important political battlegrounds in the nation,” the Washington Post reports.

“Yet for 10 months, local leaders have been unable to hire a permanent director to run the Department of Registration and Elections in Fulton County, home to Atlanta.”

“There’s no indication Snap was aware of or facilitated that data sharing, and the company said it’s taking steps to rectify the oversight. But the blunder underscores the sensitivities surrounding reams of voter data that have become a highly valuable political commodity.”

“So what should that age be? When offered a list of ages, Age 70 is the top answer chosen. This is older than the current average age of members of Congress, but about a third of current U.S. senators are 70 years of age or older.”

PENNSYLVANIA U.S. SENATOR. John Fetterman (D) said he is committing to attending one debate with his opponent, Mehmet Oz (R), in the closely watched battle for the Senate in Pennsylvania, “but his campaign is still discussing accommodations for his auditory processing problems,” Politico reports.

Politico: “Democrats are waving away GOP questions about the health of Pennsylvania Democratic Senate nominee John Fetterman, confident the stroke survivor’s condition won’t drag down his candidacy or affect his ability to serve in the Senate.”

“As the hotly contested race enters the critical two-month general election stretch, Democrats are advising Fetterman to hold to his strategy as GOP nominee Mehmet Oz and other Republicans allege that Fetterman may not be physically able to serve as a U.S. senator. That means not rushing into an early debate with Oz and remaining selective about public appearances.”

“Dr. Mehmet Oz, the Republican candidate for Pennsylvania’s open Senate seat, owns stock in Thermo Fisher Scientific, a supplier of the drug hydroxychloroquine, and McKesson, a distributor of the anti-malaria medicine,” CNBC reports.

“Oz backed the use of the drug as a Covid-19 treatment early in the pandemic, and has downplayed warnings about its efficacy as a candidate.”