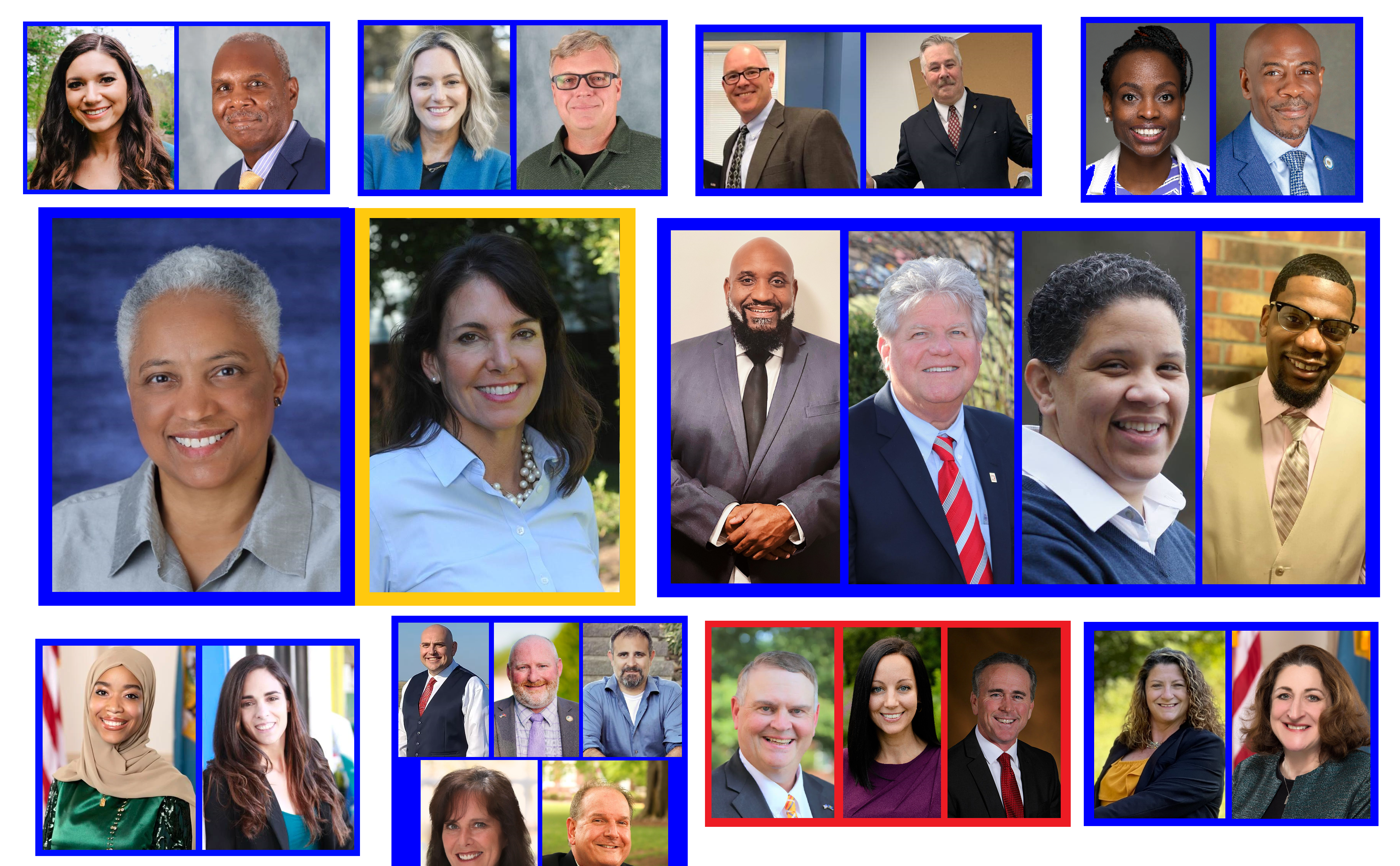 The state primary is on Tuesday, so I thought we should preview the primary elections on the ballot up and down the state. I think we are going to have some incumbents in both parties upset, and we also have several open seat primaries where it is anyone’s guess who will win, but I will do my best to offer my guess.

Then, below all that, is our huge 62 District and Statewide chart with a listing of all filed candidates. The primaries are hightlighted in yellow.

McGuiness’ convictions on two counts were upheld by the trial judge in the last week. She is a former Republican, a transplant from Park City, Utah, and a friend of Speaker Pete Schwartzkopf, who has corruptly chosen to defy his party and caucus and protect her from being removed from office.

Her opponent, Lydia York, is a professional accountant and attorney, has the support of the Delaware Democratic Party as their endorsed candidate. Imagine that, someone who will actually do the job of Auditor.

Sen. Colin Bonini is that College Republican jerk in a bow tie that you knew in your twenties who always voted no on everything. That schtick used to be enough to win him elections, but now you actually have to be a traitor openly carrying a gun that you intend to use on any Democrat you see. And that is Kim Petters. She is the MTG and Lauren Boebert of Kent County.

But Eric Buckson, a Kent County Levy Court Commissioner (the Levy Court is just a weird Kent County name for their County Council) and son of former Governor, Lt. Governor and Attorney General David Buckson is the wild card here. Respectable and reasonable Mike Castle Republicans, if they still exist, would vote for him. And as a member of the Levy Court, he has been much more active in constituent service than Bonini. So I can see Buckson winning. But I am betting on the crazy.

My Prediction: Kim Petters wins in one of those 34-33-33 type of primaries.

Incumbent Larry Mitchell needed to retire this year. That fact that he did not garnered him a primary challenge to convince him to retire in 2024. And that will likely happen. DeShanna Neal is offering a strong challenge to Representative Mitchell. She LGBTQ Advocate and community organizer. She is much more representative of the district than the incumbent. But I think Mitchell will hold on for one more term.

Conservative Democratic Senator Bruce Ennis finally took my advice and retired. What should have happened next is State Representative Bill Carson would have sought an unopposed promotion to Senator for the next four years before he himself retires. That did not happen. And now we have a free for all five way race that features no major candidate or office holder and thus no favored front runner. Indeed, the closest thing we have to that is Kyra Hoffner, who ran in the primary against Ennis in 2020. She garnered 25% of the vote in that race, and that might be enough to win this race.

The money race is instructive here. Sebastino and Hill-Shaner are out of funds, and didn’t raise much to begin with, while Hoffner, Noel and Musto have did fairly well and have enough money left for the final week. But Noel also has union organization and support, and that will probably be more decisive than Hoffner’s name recognition.

My Prediction: This is a true pick ’em. If I had a gun to my head, I think Sam Noel wins in a close race with like 25% of the vote over Kyra Hoeffner with 23%.

Rep. Nnamdi Chukwuocha got into a little trouble with some of his votes in the last session, most specifically the Renter Right to Counsel bill, which gave an opening to Wilmington City Councilwoman Shane Darby. But Darby is an especially polarizing figure and unlikely to garner a wide coalition necessary to defeat an incumbent. Further, she got into the race late, which is not a sign of a successful challenge.

My Prediction: Nnamdi survives, and I don’t think it’s going to be that close.

Rep. Stephanie T. Bolden is facing a challenge by a state employee, James Taylor, who works for the state Department of Finance’s Office of Unclaimed Property.  Bolden could have been vulnerable to a more organized grassroots challenge, but that did not really materialize. Not that she has run a good campaign either, but with incumbency and name recognition, she doesn’t have to.

I’m sorry, I can’t see the name Huxtable without thinking about the formative sitcom of my youth, the Cosby Show. Not that Mr. Russ Huxtable has any relation to a fictional character. He is a good canidate and has run a good campaign. This race is an open race in an open seat due to the retirement of Republican Senator Ernie Lopez, and it has turned into a golden and perhaps only Senate pickup opportunity for the Democrats.

Huxtable faces Jack Bucchioni, who has run against probable Republican nominee Steve Smyk before in the 20th RD in 2018.

My Prediction: Huxtable over Bucchioni 65-35.

This is the new Representative district in Sussex County that used to be located in Wilmington and represented by Gerald Brady and Bud Freel. But due to redistricting, it was transferred downstate. The two Republican candidates are Jeff Hilovsky and Bradley Layfield. The Democratic candidate, Keegan Worley, does not have a primary.

Hilovsky is an Air Force Veteran and a retired eye doctor who had four locations in Sussex County. Layfield is the principal of the Sussex Central High School.

My Prediction: I have no idea. I flipped a coin and say it will be Hilovsky. Veteran/Doctor combo over Educator.

So far I have not predicted a defeat of a Democratic General Assembly incumbent. That ends here. Challenger Becca Cotto had done everything she needs to do to win. Announced and organized early, last summer. Relentlessly knocked doors nearly every week over the last year. The incumbent, State Rep. Debra Heffernan, has not. Indeed, she did not ramp up her reelection campaign until the last month. The combination tends to lead to an upset of the incumbent, which I predict will happen.

My Prediction: Cotto over Heffernan 57-43.

This is an open seat caused by the unexpected retirement of Representative Dave Bentz. Martin Willis is an union boilermaker, and in an open seat with union organization and support, that might have been enough to win a Democratic primary. But he came up against Sophie Phillips, a 26 year old progressive with a Master’s Degree in energy and environmental policy from the University of Delaware. Phillips has organized a pretty effective grass roots campaign that seems to make her the favorite in the race.

From the Newark Post: “If elected, Phillips hopes to work on environmental bills that have stalled in the legislature, including SB 305, which sets a goal of cutting Delaware’s greenhouse gas emissions in half by 2030, and the Green Amendment, which would constitutionally mandate that the state government protect the environmental rights of all residents.

She also wants to advocate for a proposed law that would require environmental justice impact reports for developments and factories to protect communities already disproportionately impacted by environmental issues.

“That way, you’re not putting more and more pollution in a community that’s already impacted by it so much,” she said.

Phillips also wants to focus on improving education. She called for allowing school districts to take on debt for renovation projects without going to referendum, as is required now. She also wants to establish a $60,000 minimum salary for teachers so Delaware can better compete with neighboring states.

She supports a moratorium on new charter schools, explaining that the public schools in her hometown are successful because there are no charter schools or school choice to compete with. “We really need to recognize what charter schools are doing to public schools and where those resources are going,” she said. She also wants to increase the minimum wage, establish apprenticeship programs and protect LGBT and women’s rights.

That’s a good progressive platform to campaign on. Willis’ reaction: “In Delaware, you have to be a moderate, down-the-road Democrat. If we start electing these far-left Democrats, we’re going to be just like the Republicans are.”

Yeah, that’s a great way to lose a primary election where most of the primary voters are exactly the type of voter Willis doesn’t seem to enjoy.

My Prediction: Phillips over Willis 60-40.

This is another open seat race created due to the retirement of progressive stalwart John Kowalko, who was the Bernie Sanders of Delaware before there was even a Bernie Sanders in the U.S. Senate. Edward J. Klima is a firefighter and he is the managing director for the National Fallen Firefighters Foundation’s First Responder Center, which seeks to prevent firefighters from dying from occupational illnesses. Prior to that, he was public safety director at Dover International Speedway. Cyndie Romer is an employee at a tech consulting company, Diamond Technologies. Romer has been active in the ACLU, NAACP and Moms Demand Action, a gun control advocacy group.  Kowalko has endorsed Romer as his progressive successor.

I think this race is going to be close but I think Romer will win due to the Kowalko endorsement.

Madinah Wilson-Anton won a three way race last time, defeating long time incumbent John Viola. Viola is now supporting Kelly Williams Maresca, a former(?) Republican, and founder of Noble Territory, which helps connect veterans with personal and professional development opportunities and a disability advocate and youth sports volunteer. Maresca has a good social media presence that depicts what appears to be an active campaign. I think this race will be closer than many expect, unfortunately, but I think Madinah will win in the end.

This is Representative Eric Morrison’s first reelection, and he is the heir apparent to John Kowalko in being the outspoken progressive champion in the General Assembly, so of course the establishment is trying their best to take him out. Michael Herzfeld, a former police officer, is challenging him. This is the race, out of all the races where newly elected progressive incumbents were receiving a challenge from moderates or the “establishment,” that people expected to be close. But it hasn’t turned out that way. I expect Eric to win easily.

A four way race to succeed State Representative Andria Bennett, who is retiring. We have 2018 U.S. Senate primary candidate Kerri Evelyn Harris facing off against LaVaughn McCutchen, Rev. Lamont Pierce and Phil McGinnis. Her main competition is McGinnis, as the two other black candidates, McCutchen and Pierce, have not caught on. McGinnisess is favored by the Chamber of Commerce and the Carney wing of the party. Think of him as another Bill Bush, and the Dover area has one too many of those right now. Harris’ organization and experience should give her the edge but in a four way race it could be close.

Incumbent Republican Bryan Shupe has a challenger in Patrick Smith, but Smith has not raised much money and is not really a threat to Shupe’s reelection.