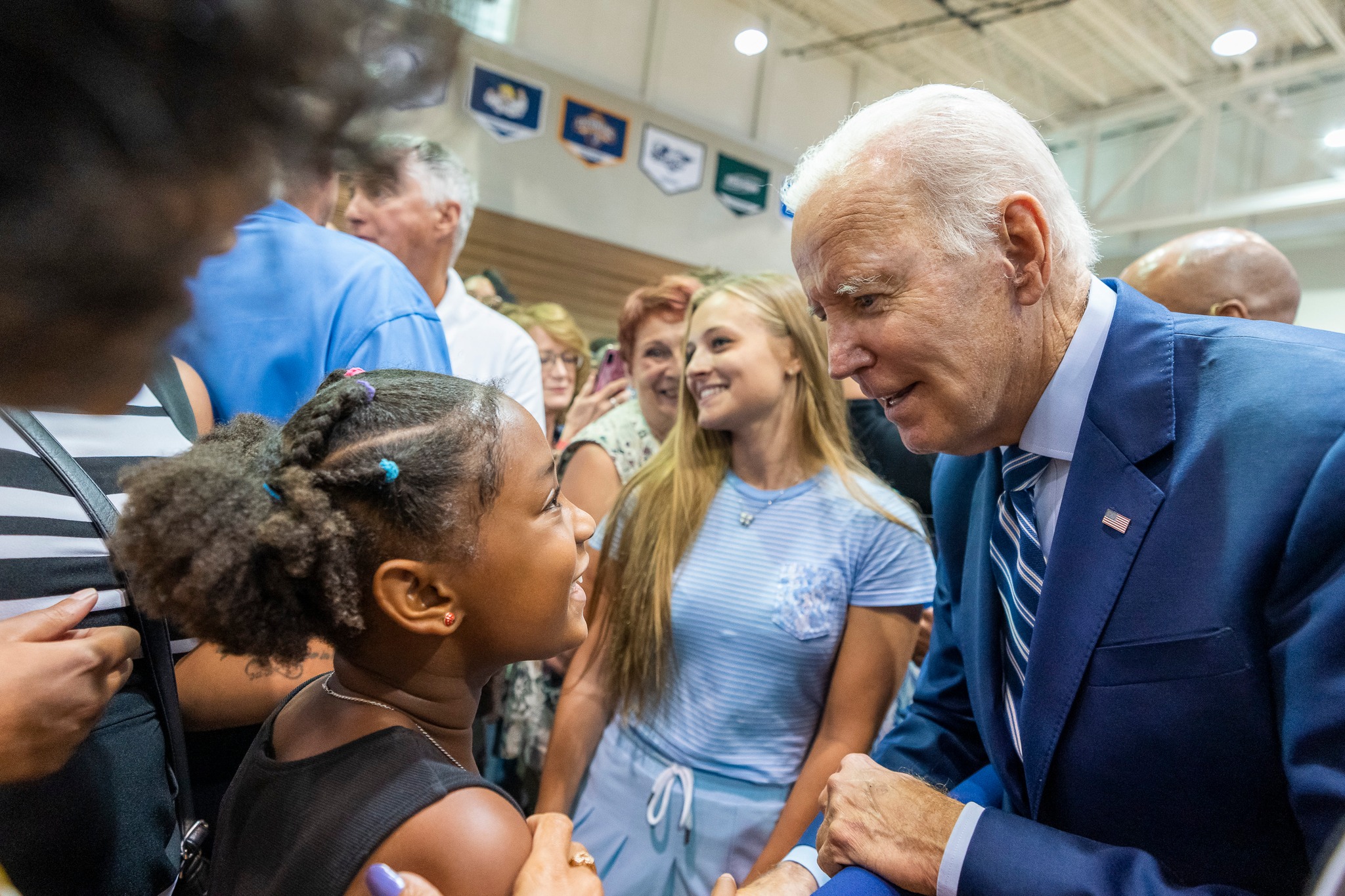 President Biden’s average approval rating is now 43% — the highest it’s been since mid-March.

Nathan Gonzales has an interesting observation in Roll Call. Presidents generally lose ground in public support during first midterm election years and they never become more popular. That is until Joe Biden.

Gonzales looks back 70 years to Harry Truman and finds the pattern is consistent. The only marginal exception is Donald Trump in 2018. But that’s largely because he started off at 39% and was at 40% by election day. Biden was a great exemplar of this pattern until about seven weeks ago. He started the year weak, treaded water until the spring and then saw his numbers drop consistently. Then about seven weeks ago he started an upward trend which now has him at about 43% support.

Needless to say these are not great numbers. They’re a bit below Barack Obama’s at his first midterm, a bit over Trump’s at the same period. Both had big midterm losses. But the upward trend this late in the cycle is basically unprecedented.

PENNSYLVANIA U.S. SENATOR. Pennsylvania U.S. Senate candidate Mehmet Oz (R) said uninsured Americans “don’t have the right to health,” but should be given “a way of crawling back out of the abyss” with “15-minute physicals” provided by the government “in a festival like setting.”

Oz declined to say whether he would support Sen. Mitch McConnell (R-KY) as the next Republican leader in the upper chamber if he wins in November and the party gains the majority, The Hill reports.

Oz was asked on a radio show in 2014 if people having sex with their cousins was acceptable, Jezebel reports. Said Oz: “If you’re more than a first cousin away, it’s not a big problem.”

“During Pennsylvania’s Senate primary, Black Democrats worried that the GOP would target voters with ads about the time Democrat John Fetterman pulled a gun on a Black jogger he wrongly suspected of a crime,” NBC News reports.

“A political committee backing Fetterman’s opponent in the general election, Republican Mehmet Oz, is launching a 30-second TV ad about the incident that started airing Tuesday on networks that have solid African American viewership, such as Black Entertainment Television, the Oprah Winfrey Network, MSNBC and ESPN.”

Playbook: “Notably missing from the ad: The man himself, Chris Miyares, is now a Fetterman supporter.”

Pittsburgh Post-Gazette editorial: “Pennsylvania Lt. Gov. and U.S. Senate candidate John Fetterman has not fully recovered from the serious stroke he suffered in May. His campaign has acknowledged his obvious struggles with “auditory processing” and speech, but the persistence of those struggles has contrasted with the campaign’s rosier predictions of a return to the rigors of campaigning, including debating his opponent, Mehmet Oz.”

“If Mr. Fetterman is not well enough to debate his opponent, that raises serious concerns about his ability to serve as a United States senator.”

“None of this excuses the antics of Mr. Oz’s campaign, which has decided that its candidate will benefit from dragging the race deeper and deeper into the muck… Mr. Oz has decided, oddly, to distance himself from his own campaign’s actions, as if it’s an unaffiliated super PAC.”

House Minority Leader Kevin McCarthy (R-CA) will formally unveil a four-part “Commitment to America” in Pittsburgh on Sept. 19 to tell voters why they should vote for Republicans — not just against Democrats — in November, Axios reports.

Most notable is a lengthy New York Times article reporting that under chair Rick Scott, the NRSC’s “enormous gamble on finding new online donors has been a costly financial flop in 2022.” Mitch McConnell himself wouldn’t comment Monday when reporters asked if he had confidence in Scott’s performance, while Scott responded to McConnell’s recent criticisms about “candidate quality” with a statement declaring, “It’s an amazing act of cowardice, and ultimately, it’s treasonous to the conservative cause.”

In addition, both the Washington Post and CNN detail McConnell’s frustration with billionaire Peter Thiel, who spent massive amounts to help Arizona’s Blake Masters and Ohio’s J.D. Vance win their respective primaries but has so far refused to open up his wallet to aid the two much-derided nominees in the general election. McConnell’s Senate Majority PAC last month booked a massive $28 million to help Vance—despite Ohio’s progression toward firmly red-state status—before it announced it was canceling $8 million intended for swingy Arizona.

“Senate Republicans are moving swiftly to contain potentially disastrous fallout from stubborn disagreements between Mitch McConnell and Rick Scott as the party labors to flip the Senate,” Politico reports.

“Senate GOP leaders met for more than 45 minutes on Tuesday afternoon, their first gathering after an August break throughout which Republicans openly fretted — McConnell chief among them — about their chances of taking over the chamber.”

This is the first survey we’ve seen out of Washington’s 3rd District since Kent edged out his fellow Republican, Rep. Jaime Herrera Beutler, in the early August top-two primary. Perez, for her part, says she raised $600,000 last month, which would be more than twice what she’d brought in for the entire campaign as of mid-July.

Donald Trump called on Republican voters to back Geoff Diehl (R), his choice for governor in Massachusetts, in Tuesday’s GOP primary, Newsweek reports.

Said Trump: “Geoff is a proven fighter who successfully pushes back on the ultra liberal extremists, and who has driven them a little bit wild too because they can’t figure him out, and he’ll rule your state with an iron fist and he’ll do what has to be done.”

New campaign finance numbers are in covering July 18 through Aug. 22, a 35-day-period that covers the three weeks following Tudor Dixon’s victory in the Aug. 2 GOP primary, and they show that party donors remain stingy when it comes to helping their new nominee. Democratic Gov. Gretchen Whitmer outraised Dixon $2.4 million to $690,000, and she retains a ginormous $14 million to $520,000 cash-on-hand lead. Simon Schuster of MLive.com notes that the reports show that Dixon’s campaign has all of two staffers on its payroll, and that she hasn’t thrown any fundraisers since her primary win.

Dixon, though, does have one very wealthy clan that could turn the financial situation around. The DeVos family has contributed $4 million since May toward outside groups that attacked Whitmer or promoted Dixon, and one Democratic strategist predicted to CNBC that they could spend anywhere between $10 million to $30 million to flip this office.

ARIZONA U.S. SENATOR. While most Republican candidates continue to be reluctant to discuss abortion at all, the NRSC is instead testing out an anti-choice message against Democratic Sen. Mark Kelly with a new ad. After attacking the senator over immigration and education, the narrator insists, “He even supports extreme last minute abortions right before baby’s birth.” Kelly voted for the Women’s Health Protection Act earlier this year, which would prevent states from restricting access to abortion.

“As a college student, Blake Masters ― now the GOP candidate for U.S. Senate in Arizona ― defended a classmate’s skepticism of the ‘official story’ of the Sept. 11 terrorist attacks,” the HuffPost reports. “He also told his roommates that voting was pointless and often ‘immoral,’ railed against health inspections as ‘bullshit,’ and said America circa 2006 was ‘fascist.’”

“The messages were sent to the group email list of Columbae, a left-leaning vegan co-op at Stanford University where Masters lived and where the housemates made decisions on a collective basis.”

KENTUCKY GOVERNOR. “Former United Nations Ambassador Kelly Craft (R) launched her long-anticipated campaign for Kentucky governor on Wednesday, saying the state’s ‘best days are ahead of us’ as she joined a crowded lineup of Republicans competing to challenge Democratic Gov. Andy Beshear (D) next year,” the AP reports.

GEORGIA U.S. SENATOR. Sen. Raphael Warnock (D-GA) “said he’ll debate Herschel Walker (D) in Savannah in October – if his GOP challenger accepts a second showdown next month and agrees that the candidates won’t be provided the topics of the questions in advance,” the Atlanta Journal Constitution reports.

Ron Brownstein: “President Joe Biden assembled his winning Electoral College majority in 2020 by flipping five states that had supported Donald Trump four years earlier: Michigan, Pennsylvania and Wisconsin across the Rust Belt and Georgia and Arizona in the Sun Belt.”

“In November, voters in all five of those states will render verdicts on candidates virtually hand-selected by Trump in Republican primaries — including the GOP Senate nominees in Pennsylvania, Georgia and Arizona and gubernatorial nominees in all five states, except Georgia (where Republican Gov. Brian Kemp, who is up for reelection, has feuded with the former President).”

“Across these tipping-point states, the success or failure of Republican candidates who are cast so firmly in the Trump mold may offer important insights about the viability of the former President himself in 2024. If most of these nominees running on Trump-style messages lose this fall, even in an environment that favors Republicans overall, it would raise serious questions about Trump’s ability to recapture these critical states in 2024.”

“The return from the Labor Day holiday marks the unofficial final sprint to Election Day, and this year is slated to be no exception — there’s already been $1.4 billion in political ad bookings placed between Tuesday and Election Day, with that number expected to swell in the coming weeks,” NBC News reports.

“Right now, Democrats have the edge overall — more than $658 million in bookings compared to the GOP’s $554 million, per ad-tracking firm AdImpact.”

“Republicans in tight congressional races are going silent on health care, scrubbing campaign websites of anti-abortion language and in some cases distancing themselves from past criticisms of the Affordable Care Act,” Axios reports.